KA Turner alerted me and sent me all the information for this post, so everything here is quoting or rephrasing what he already sent me. After an almost three year delay, I am finally doing a post on this place, which was a very significant yet overlooked piece of Georgia retail history. The information below was submitted to me by him on September 27, 2006, and I have rewritten and paraphrased much of the information for clarity purposes. The last paragraph is my addendum to what he said.

Westgate Shopping Center (aka Westgate Mall) was the first fully enclosed shopping mall in Georgia. It opened in 1961, which was a year after Eastwood opened in Birmingham. Like Eastwood, Westgate had no department store anchors, though the mall was prominently anchored by JJ Newberry's (much like Eastwood). Like most of the earliest malls, they did not affect downtown shopping since they had few anchors and a smaller selection of choices. They were essentially strip malls turned facing each other with a central corridor. Downtown actually continued to thrive throughout the 1960's until Macon Mall came later on.

Like Eastwood Mall, Westgate was anchored by two grocery stores in addition to Newberry's. In the early 70's Piggly Wiggly, Newberry's, and Colonial Stores were the anchors. Woolworth's and Gilberg's cloth store, both replaced by Cloth World, took up the Colonial court. Fickling and Walker operated for years in the center. Also, a locksmith was located next to Newberry's in a large kiosk. Next to this were, not in order, a clothing store, Sherwin-Williams, and a sweet store. Westgate Triple Cinemas set up shop in an outparcel. Finally, Eckerd Drugs and a few other stores, including Household Finance and a Coin and Trick Shop, sat in the north court by Piggly Wiggly. 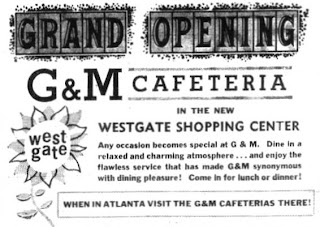 Back when EVERY mall had a cafeteria, apparently Westgate's was G&M. They were supposedly in Atlanta, too. I have never heard of them, assuming S&S must have bought them out (KA Turner: image).

Macon Mall killed Westgate Mall in 1975, which caused it to become a ghetto mall. This likely would not have happened if the mall had been able to attract any downtown department stores beforehand. According to the Macon Telegraph, the mall was completely empty by 1978. When this happened, an attempt was first made to make it an outlet mall. Later, Wal-Mart was tacked onto the side in 1988 and a pedestrian hall made onto the side of the old Colonial store. Scotty's Home Improvement Center, a now-defunct Florida staple, replaced the Piggly Wiggly on the north side. Burlington Coat Factory replaced Key Wholesale Distributors where Newberry's originally stood. All of these efforts proved futile to save a mall with no real department store anchors just down the street from huge Macon Mall. In 1994, the wrecking ball hit all but Wal-Mart and Home Depot with work completed the following year. Later, the theater was dozed.

The strip mall that replaced Westgate Mall included, in addition to Burlington and Wal-Mart, Media Play, Petsmart, Stacy's and Home Depot, which apparently replaced Scotty's. Today, Westgate Mall is dying again. The strip mall that replaced it is now emptied out as the area around it declines and retail chains that came into the redeveloped center failed from bankruptcy. Now, the strip mall that was built to replace it is facing difficulties of its own. Unfortunately, it looks like that after three tries that nothing could really save the ailing fortunes of Westgate, which today has nothing left other than last chance merchant Burlington Coat Factory. This time, though, local leaders are left in a dilemma on a mall that has died three times, but the fortunes once again look bleak for Westgate. As one of the first to be built and one of the first to die in the state, the mall had a short life and rocky history.
Posted by J.T. at 1:11 AM