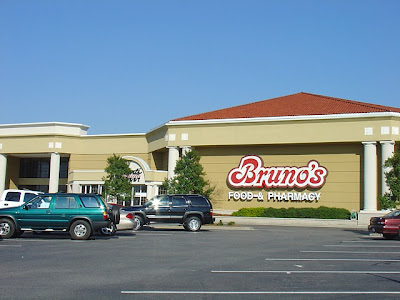 Another Birmingham-related post, this one directly affects Atlanta and that is the mention of Bruno's supermarket. Bruno's was a big player in the Atlanta market in the 1980's prior to the invasion of Publix. An upscale supermarket much like Publix, they came to Atlanta in 1987 when local chain Ogletree's was purchased. A picture of a former Ogletree's/Bruno's is found in an earlier post.

While Bruno's has long since left Atlanta (they left by 1995), they are still alive and well in their home city of Birmingham where they existed long before. While no longer an independent chain, a few of these are still around including a location at The Summit (pictured above). Bruno's was also notable for two now defunct retail ventures including a drug store chain (Big "B" Drugs), which was also in Atlanta and their Atlanta partnership with Kmart for one of the first discount superstores (American Fare) in 1989. Respectively, the Big "B" stores all became CVS and the American Fare simply Super Kmart before later closing.

While I have not found many locations, I know that they exist today in Birmingham owned by the same company that also owns Bi-Lo, Foodmax and a couple other grocery chains.
Posted by J.T. at 1:31 AM 10 comments: 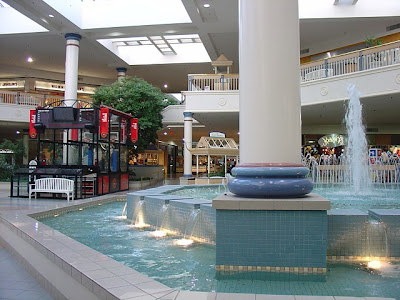 My first post about Birmingham retail is Century Plaza Mall, a mall that is getting a lot of attention these days for what's happening to it. Here I will have quite a bit to say about it, though it's not all that I plan to cover in the city by far. It is even now one of the most interesting retail stories of the South, especially with its adaptation of Atlanta stores combined with homegrown favorites. The Birmingham retail scene is a fascinating one, and a friend of mine who hosts the Eastwood Mall tribute has educated me much on this town that hopes to one day rival Atlanta, but is still trying to overcome the stigma of the surrounding state as well as the fact Birmingham has as a fairly high amount of urban decay due to its industrial history, a continuing cloud of racism and sluggish growth. The unfortunate product of this is that the city became overretailed and basically everything on the west side of Red Mountain is having trouble these days. 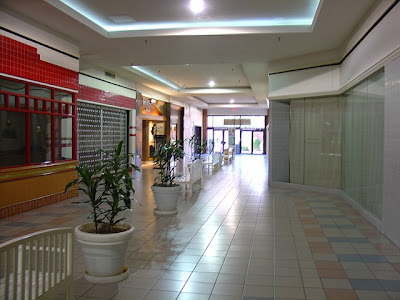 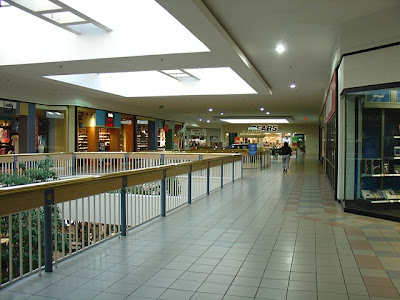 The story of Century Plaza is pretty much the same as its deceased neighbor Eastwood Mall (different link). It was a mall that opened in an older suburb that became more blue collar in a city with better malls closer to the wealthier areas. It is still alive, but the area around it as well as the sudden exodus of three out of four anchors has this classic 1975 mall very much in jeopardy. 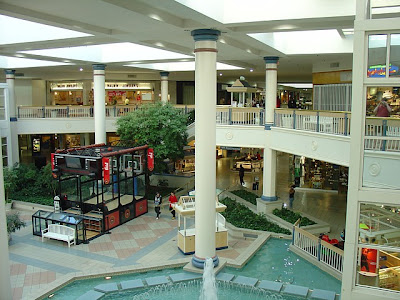 Century Plaza Mall from the outside is far from pretty. It is very plain and somewhat depressing 70's modern design with dark glass, red brick and simple lines that make it hardly inviting. It is a trip back in time to see it: reminding me somewhat of Cumberland Mall prior to the first renovation. While it was a perfectly normal design for the 70's and 80's, today it looks horribly dated considering that it has never had a single exterior renovation since it opened over 30 years ago. While this maintains balance with the structure, it was never an attractive enough design to make it worth it. The interior, however, was updated in the early 90's typical of most 70's malls shaking off earthtones and disco fever. 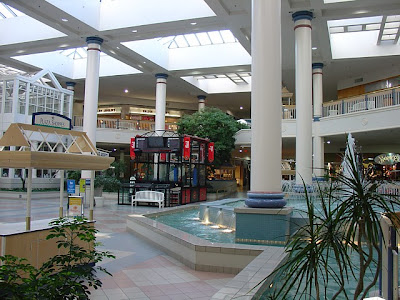 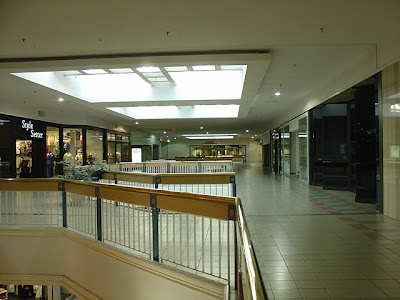 Inside, the mall is a typical two-level four-anchor super-regional center that was meant to attract large crowds, and it seemed it would have caused the death of Eastwood Mall, but Birmingham was unique in that it had an unusually high amount of department stores for a city its size. Also significant was the fact that Eastwood Mall originally had no had anchors, and Eastwood had survived more on its novelty and location with anchors coming later. 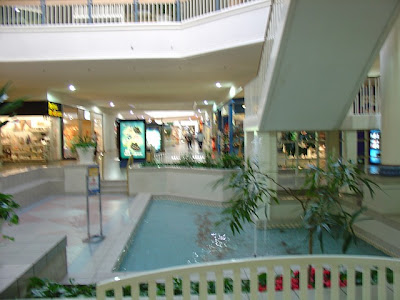 When Century Plaza opened, its four anchors were Loveman's, Rich's, JCPenney and Sears. Loveman's was a major chain in Birmingham that was also in Chattanooga, though it is not known if they were exactly the same store. When Loveman's closed at the mall, Pizitz left Eastwood forming the eastern anchor of the mall. Pizitz itself was added to Eastwood in 1969. Pizitz did not last long, though. It was then quickly replaced by the McRae's nameplate when the Pizitz family sold their 13 store chain to what was eventually Proffitt's/Saks in 1986. Other than this, the mall saw no anchor changes for almost 30 years and existed well among a city with six other malls.

Also, Century Plaza proved to be very durable considering the competition of Riverchase Galleria in Hoover. A mall of the size and offerings of Riverchase was near impossible to compete with, and Century Plaza looked small and dumpy by comparison. Nevertheless, Crestwood Boulevard (U.S. 78) remained a strong avenue for retail, and the complimentary Eastwood Mall with its Parisian and Service Merchandise (former Yeilding's) kept the area viable even when the surrounding neighborhood was showing signs of wear and tear. The problem was, Eastwood Mall could not hold up to the ever expanding glut of malls for a city hardly large enough to support them, it began emptying out in the early 00's with Parisian closing in 2005 and the few remaining stores vacating by the end of that year. Much of the blame is probably due to the opening of The Summit in 1998.

While it might seem odd to point out a competing mall's fall, Eastwood's blight hurt Century Plaza. Eastwood was not competition. Century Plaza NEEDED Eastwood to survive, because this gave an adequate shopping area to compete with the I-459 complex (Riverchase, Summit). This was painfully obvious when Rich's closed at Century Plaza in 2004. It should be noted that when Rich's (now Macy's) closed at a mall, it was typically a death knell because Rich's stores were rarely closed in their 167 year history and these were typically very popular large traffic generators at malls in both Georgia as well as their Alabama locations. 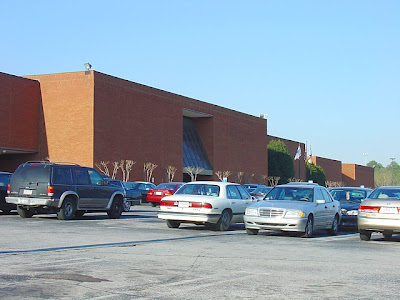 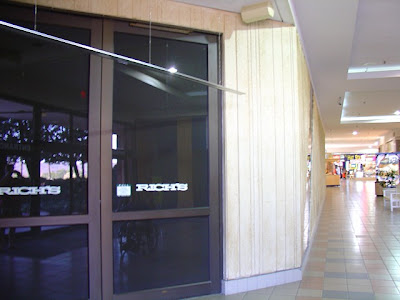 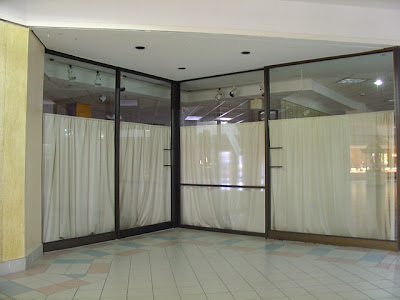 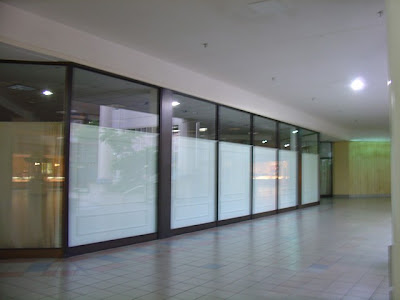 (Rich's photos of the various lower level entrances. Note these were not sealed off. Also note the angled black glass on the wall next to the side entrance that apparently made it possible to see the mall from the escalator.)

Rich's at Century Plaza was a very fascinating store. It was literally built into the mall instead of external from the mall. Two mall entrances graced each side of the store, one faced the center court and one was on the outside, meaning that three first-level entrances were on the inside, and these all took up a lot of mall space. The upper level expanded east along the mall and presented two entrances. Rich's at Century was also one of the smallest locations, and did not carry a full line of merchandise...undoubtably a factor in why it ultimately closed. Brookwood and Riverchase were full-line Rich's stores. Century was not. In terms of the bizarre layout of Rich's, I will attempt to show some of this in the photos here. 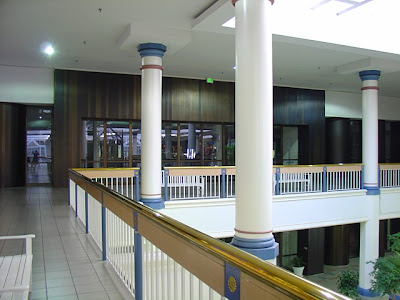 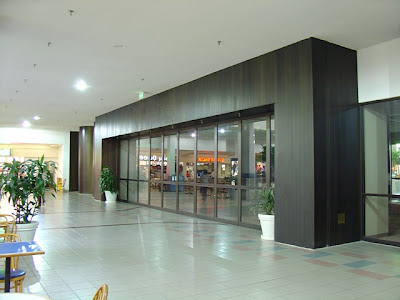 (These photos of the JCPenney mall entrance were absolute 1970's. It is the typical sinister beauty that is still today how I picture that a mall is supposed to have.)

Of the other anchors to close, Belk followed suit after Rich's. Belk came there only as a result of the buyout of the McRae's stores in 2005 and departed quickly much in the way Pizitz had previously. When they opened there at the end of 2005, they only remained a couple months before quickly closing. Their entry resulted in the east anchor being four different department stores before finally closing for good. JCPenney started vacating their store throughout mid-2006, having their final liquidation September 30, 2006. The wave of departing department stores was an absolute blitz and those mall entrances all remain open to full view with exception to the upper level of the Rich's. The lights even remained on in the Belk. 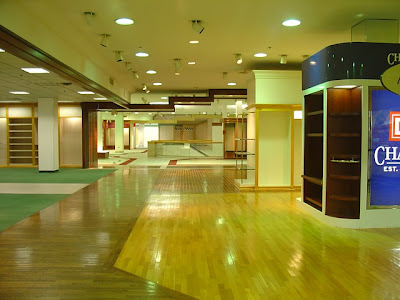 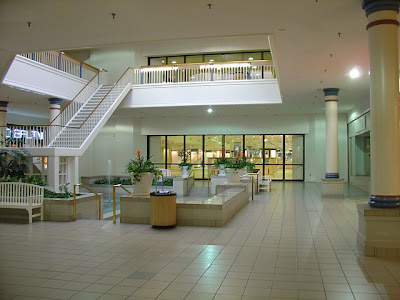 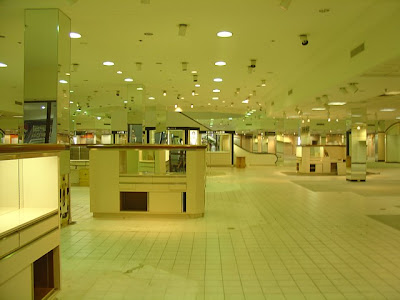 (Belk, formerly Loveman's, Pizitz and McRae's is still open to view. You can look, but you can't touch what's left.)

The mall has made no attempt to hide these stores, suggesting that quite possibly the owners see the writing on the wall and have either given up or they have other plans. Sears is the only remaining anchor and they are also rumored to split soon. It seems to have all happened so fast even the tenants haven't caught up. Despite high vacancies, at least 50% of the stores are still occupied in the mall, most surprisingly still major chain stores as well. When I visited, the mall was still moderately busy even on a Thursday afternoon. The only obvious logic behind this is that the neighborhood has become a largely minority neighborhood and less wealthy. While this would not be enough to kill a mall overnight in Atlanta, we must remember that Birmingham is no Atlanta. 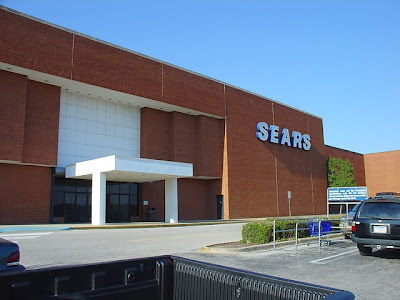 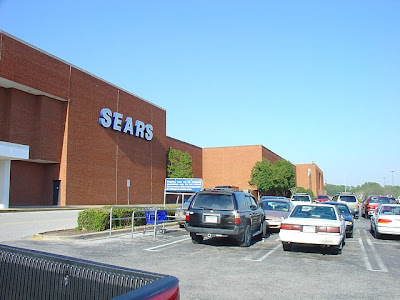 (Here are exterior shots of the Sears...the sole remaining anchor. I found it rather hard on the eyes.)

The mall itself is hardly to blame for this sudden turn of sour luck. When driving on Crestwood Boulevard, businesses are closed all over the place. Office Max recently closed. Several fast food places sit empty. It seems chain stores are fleeing from Irondale, though hope resides in the construction of a new Super Wal-Mart on the footprint of the South's second oldest enclosed mall. Other malls in Century Plaza's position have managed to survive a mass exodus of anchors such as Savannah Mall, but I fear it is instead Alabama's own version of Augusta, Georgia's massive Regency Mall.

The good news is that the mall is still owned by a strong mall company, General Growth Properties, which saved Cumberland Mall from similar extinction with a radical and, at least at the moment, wildly successful redevelopment of a struggling mall. Perhaps this is no accident and maybe such a plan is in the works for the Rich's to be replaced with a big lifestyle portion and the Loveman's/Pizitz/McRae's/Belk to be demolished for a Costco...or not. Time will tell.

Century Plaza is on total death watch now. Two days from now, Sears plans to depart the mall after hanging on as the last anchor. The store will close for good on May 31st, 2009 leaving the mall without any anchors. Worse than that, the owner of the mall General Growth Properties is bankrupt (something not expected in 2007). The prognosis for this mall is not good. The mall is emptying out and will most likely close for good before the end of the year. The property will likely also be sold as part of GGP restructuring. Unless the city assumes the property for government offices, the mall will most likely sit vacant like Regency or be demolished. The best case scenario is a Target shopping center is built on the site (to compete with Wal-Mart) similar to what happened with Clearwater Mall in Clearwater, FL.

Century Plaza was closed permanently to the public and thus abandoned upon the completion of Sears closing its location at the mall.  After 24 years of service, Birmingham's last mall on the Crestwood Blvd corridor shuts its doors.