The fact that LaGrange even has a mall is fascinating in its own right. If not for a local college out of downtown, the LaGrange Mall would likely have never been constructed. The thing is, LaGrange is like many towns south of Atlanta in that it at the time it was built, it was quite far from other regional shopping centers. Because of that, it has a decent market to draw from ranging multiple counties in Georgia and Alabama. It is a small mall, and this smallness likely was reflected in the fact that LaGrange could never sustain a large shopping center like those in Atlanta or Columbus. Shannon Mall to the north, while small by Atlanta standards, dwarfs this mall. Peachtree Mall in Columbus is a monolith in comparison. Somehow, though, this mall remains modestly successful and was quite busy when I visited on a weekday! 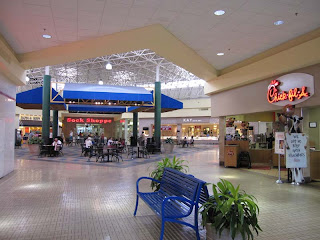 Looking from the main entrance to center court. Sock Shoppe in the background was formerly Goody's. Note the standalone Chick-Fil-A

Built in 1979, the mall was situated to take advantage of recently completed I-85. I-85 was completed in the area in 1976. It is located on SR 109 east of the city, which has an interchange with I-85 and leads directly to downtown. Other retail is found on this road, but it is actually not the dominant retail center of the city. Most of the shopping is actually north of town on US 27, including Wal-Mart. Still, the mall is in a good position if the town ever grows larger. 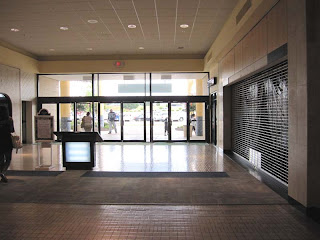 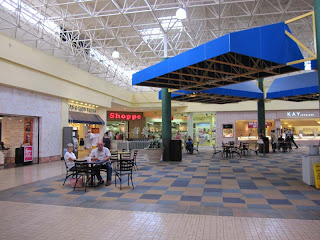 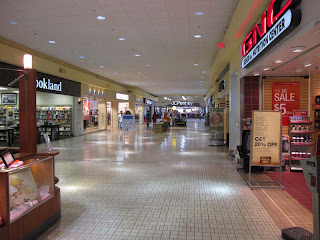 The first photo is looking back at the main entrance from the first photo. The second takes another look back at center court from a different angle. The last is a view of the mall corridor approaching JCPenney.

The original tenants of LaGrange Mall were Belk, JCPenney and Columbus-based Kirven's. Belk is almost in common as Wal-Mart in rural Georgia, which has actually hurt their reputation in their attempt to expand into Atlanta proper. To my knowledge, this was never a hyphenated Belk, but a company store. It would have been a Belk Gallant, but the Gallant name disappeared by the end of the 1960's and all remaining Belk Gallant stores converted to company stores. The mall also had a Goody's prior to bankruptcy in 2009, which opened originally as Kirven's. However, the mall has quickly filled the former Goody's/Kirven's with a local store known as the "Sock Shoppe", a local clothing store that has apparently been in existance since 1934. It is nice to see that a local tenant happens to be one with a history instead of an upstart, and I wish the best of luck to Sock Shoppe. 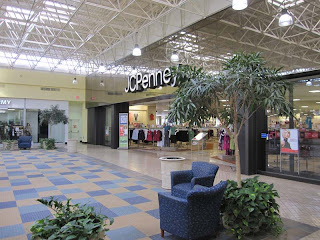 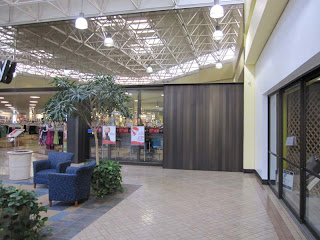 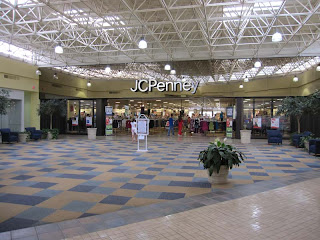 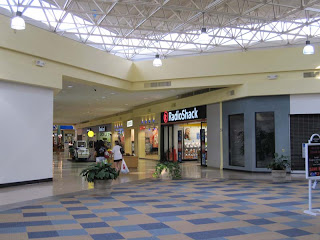 Three angles of the Penney's mall entrance. The mirrors on top make the mall appear to go on further than it does. Note the 70's fake wood style on the second shot. The style there is identical to that used at the closed Century Plaza store. Third photo is full court. The last photo is looking back towards the main mall from the Penney's entrance.

The mall itself is actually one of the most drab malls I've been to. There is not too much appealing about it aside from the distinct period mall entrances to the anchors. What might have been appealing such as planters, sunken seating areas or fountains were removed and replaced with a flat surface covered in bluish carpet squares that looked rather loud and ugly with the pale yellow trim. The rest of the mall looks to have original flooring, but some modest renovations between the store entrances and ceiling, all completed in 2001. I am betting they were attempting to work with that flooring. The ceiling has mostly the drab tiles so popular in the era, but has some more distinct period lattice work and skylights. These are found in center court and in front of the two main department stores. Also, none of the mall is over one level: typical for mid-1970's small town malls. For those looking for cutting edge architecture and multiple levels and corridors to explore, keep driving to Atlanta. In all, I would have enjoyed the center more if they had retained all of its 1970's appearance. 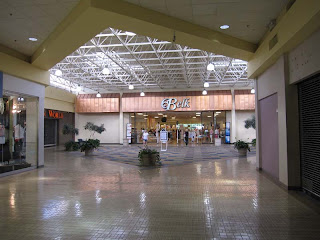 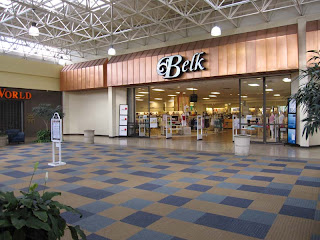 Approaching Belk from the east mall then right in front of Belk. The shiny coppertone entrances were a very interesting style used in stores of this era. Note the similarities to Belk entrance at Georgia Square. 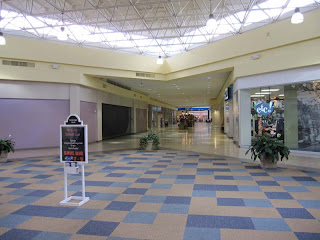 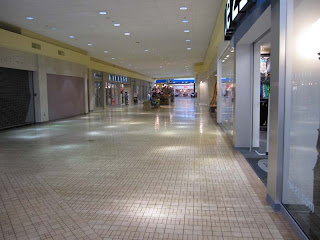 The first photo is leaving Belk court. The last is looking down the east mall, which is the remainder of the mall photographed back to center court.

Outside, the mall is not terribly inviting but not terribly ugly either. The mall entrance was, of course, upgraded recently but otherwise its your standard 70's fare. A vast parking lot sits in front of the mall with some parking in the back. There are no mall entrances in the rear, but there are entrances to Sock Shoppe and JCPenney. The Belk entrance is apparently sealed off in the back, but there is a peculiar employee entrance off to the left of it. In all, this makes it a mostly forward-facing mall. 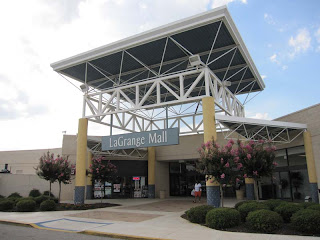 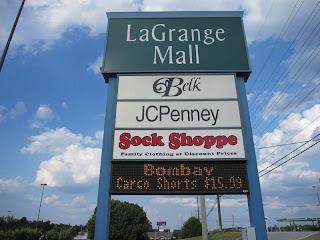 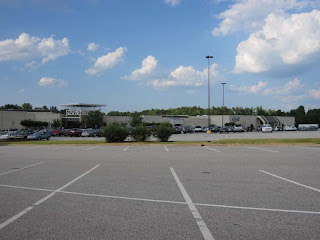 Now, looking at the outside we see the main entrance to the mall, sign on SR 109 and overview shot of the mall (except Penney's).

LaGrange Mall's fortunes, however, might change for the dramatically better when the Kia plant is completed south of the city. This plant is expected to bring thousands of jobs and significant growth to the city. This will likely dramatically increase traffic at the mall. If the plant brings the promised growth, then quite possibly the mall would also expand or redevelop. There will very likely be new competition that could derail this, though. Much like Cookeville Mall in a previous post, a large power center would be enough to empty out and create cause to demall this mall. While adjacent city competition (such as Newnan) is not likely for a mall this size this far from the nearest mid-sized city, it will be very interesting to see if the future of this mall actually remains as an enclosed shopping center. 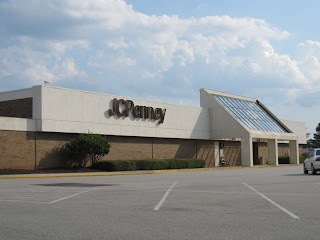 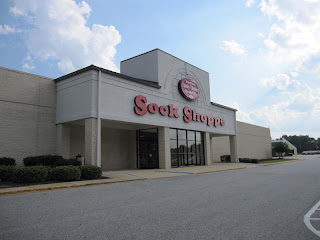 Outside entrances to Penney's and former Goody's, now Sock Shoppe. The Penney's entrance is on the north side of the mall. Note its very stark modernist design. 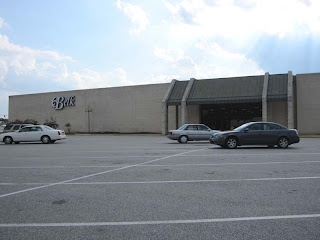 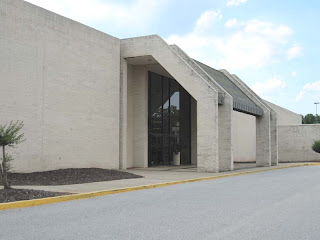 Belk east entrance and detail of the replica south entrance. This Belk entrance is definitely in the post-arch era.

Overall, these mini-malls are still found in a few of the more remote parts of the state, and LaGrange Mall has bragging rights in that it has retained both of its original anchors and appears to have been quite successful for around 30 years. However, it is a bit of a disappointment in comparison with the absolutely beautiful downtown it replaced, and it is showing its age. Regardless, while this is not the best or nicest small mall I've seen, I still want to recognize and admire its continued success for its size and market and hope it is still here 10 years from now.
Posted by J.T. at 3:30 AM