A reality that is nothing new to the residents of Hampton Roads is that the area is overmalled.  Hampton Roads can be compared in many ways to Florida in how it is basically a huge sprawing suburban cluster of cities instead of a single city making up the area.  The result is that each city attempted to carve out its own suburban realm including their own malls to pad the city's tax base.  Mall developers, eager to oblige, built and built malls until malls both major and minor were all located within 5-10 miles of each other cannibalizing each other for stores, sales and shoppers.  This became evident quickly as the earlier malls died more quickly than most and the newer, larger malls found it difficult to survive.  This was certainly the case for Newmarket North Mall. 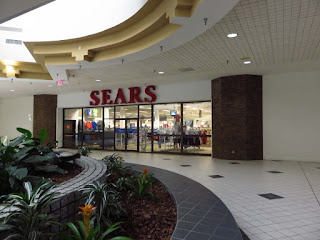 Newmarket North suffered for a number of reasons.  One was that it was developed using apparently outdated or at least not well researched data.  Constructed by the Hahn Company, the mall was not well positioned for the time it was built: a superregional mall opening in an area that was already becoming too blue collar to support it.  Newmarket North did not initially appear to be a rotten apple.  It had solid anchors, was in a seemingly prime retail strip and it was not redundant with other area malls.  That distinction did not last very long. 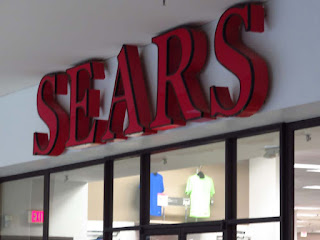 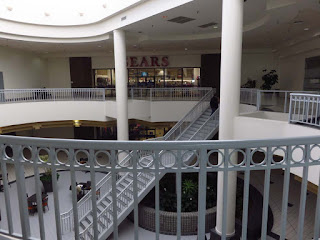 Obviously the most remarkable thing about Newmarket North Mall is that despite the mall itself being demalled for nearly 20 years, Sears still lingers on with the old 1975 logo still hanging on at the mall entrance!


When the mall opened on March 26, 1975, it was anchored by Sears, Leggett and Miller & Rhoads.  All of those were prominent anchors in Virginia at the time with Sears a guaranteed draw, Leggett a desirable anchor found throughout the state as a division of Belk and Miller & Rhoads a prominent upscale department store based in Richmond.  Its nearest competitor was Coliseum Mall, which complemented the mall with anchors that included Korvette's (later Wards), JCPenney and Rice's-Nachman's.  Colliseum Mall was better positioned along I-664, but it lacked the solid anchors that Newmarket North Mall had.  The result was an expansion in 1976 that added Thalhimer's and Smith & Welton to the mall.  This honeymoon lasted a little over a decade.  Another mall, Mercury Mall, was much closer but it was a very small early mall without any major anchors and was effectively killed off by Newmarket North by the mid-1980's. 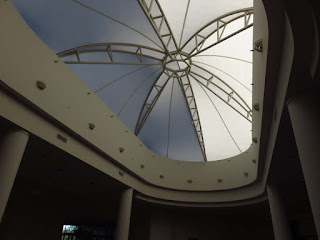 This tent-like structure was obviously added in the 1989 update 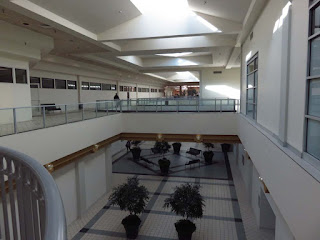 Looking opposite Sears toward Miller & Rhoads.  At this point, only the layout gives away its origins as a mall.  All of the storefronts were removed in 1998 and replaced with these walls.  However, the ceiling, rails and flooring are original to the 1989 update other than the fact the once teal blue rails are now a drab gray. 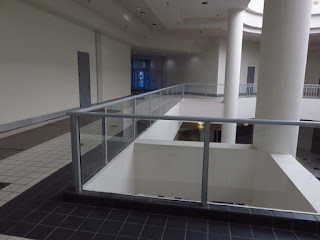 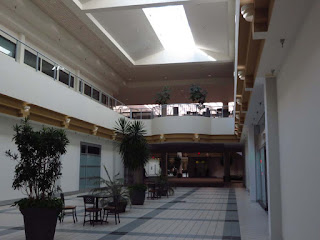 Lower level view looking back to Sears and the Sears court

In 1987, competition arrived to both malls in the form of Patrick Henry Mall.  Like Coliseum, the new mall did not initially appear to be as credible of a threat as another Crown American mall anchored by Hess's, Bradlee's and another location of Leggett.  However, changes in the retail scene were underway that would deal a crushing blow on the still-new mall.  The first was when Miller & Rhoads parent company Allied Department Stores became a victim of the financial scandals that created major upheaval in the industry.  While many Allied stores were sold to competitors, primarily Hess's, Miller & Rhoads went under.  In 1990, the store closed for good with no other department store coming to take its place.  Hess's was the logical successor, but they were not about to duplicate stores with their Patrick Henry store. 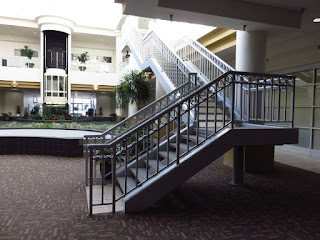 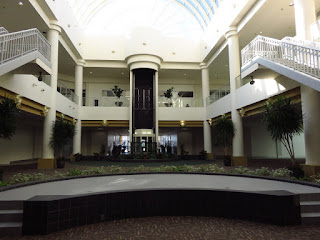 The center court update with the grand looking staircases and domed skylight were part of the 1989 update.  However, much of the color was stripped out of this scene in subsequent updates. 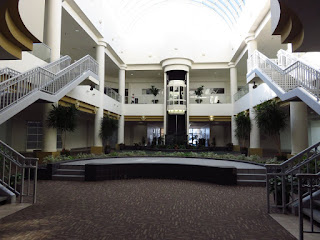 Despite the pending closure of Miller & Rhoads, the mall was sold to Goodman Segar Hogan.  Its new owners were still ambitious about the mall's future and immediately set forward to commence a major renovation.  The mall was gutted and redone as a lighter, brighter mall and given a new name: Newmarket Fair Mall.  Nonetheless, new tiles, paint and skylights were not the cure to this mall's illness.  The fact was that the newer Patrick Henry Mall was visible along I-64 in a better neighborhood and Coliseum Mall also expanded heavily in an attempt to compete with Patrick Henry Mall.  Newmarket North received no such expansion, and it was a couple miles off the interstate in a declining neighborhood. 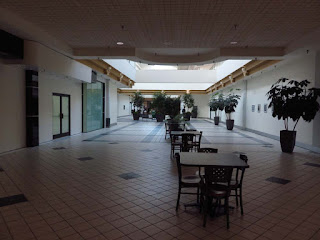 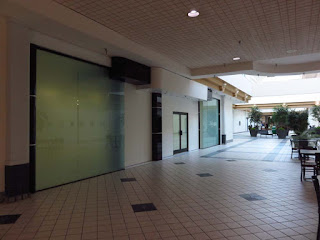 About the only evidence left of a former storefront is on the left side with Miller & Rhoads behind me. 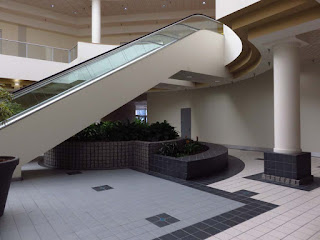 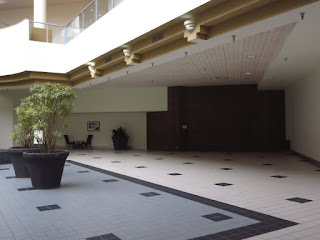 The right side of the former Miller & Rhoads mall entrance is still visible while the left side is walled off.  It is today a Verizon call center. 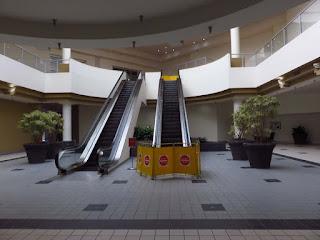 Diagonal escalators in the Miller & Rhoads court give the mall a DeBartolo feel.  Only the down escalator was working so as to prevent shoppers/visitors (what shoppers?) from accessing the restricted parts of the second floor. 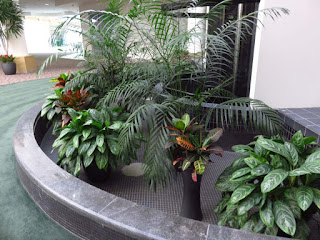 Once a fountain, now a tacky cluster of house plants where the water used to flow.

As the 80's were coming to a close, the stores were also beginning to close.  By the early 90's the mall had a high number of vacancies, and the blows kept coming.  After Miller & Rhoads closer, next to go was when Leggett, who also had a store at Patrick Henry, downgraded their store to an outlet in 1991.  In 1992, the bridge/tunnel on I-664 to the south was completed connecting Newport News to Norfolk taking traffic off of Mercury Blvd while drawing more traffic away from the mall and to better shopping options further south and east.  By that time a new look could not restore the luster.  By the middle of the decade, the mall was half-empty and Leggett pulled out around the same time.  When the dust settled all that was left were a few stores including a Morrison's Cafeteria and Sears. 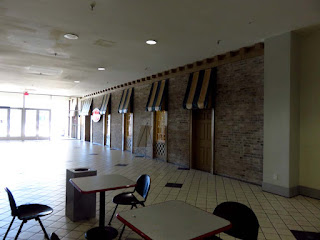 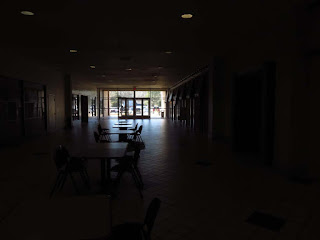 What is strange is that despite the death of the mall as a retail center, Sears never left.  When all three malls opened in Newport News, the others failed to attract a Sears nor provided room for them to relocate.  The mall itself was ultimately repurposed as a business center in 1998 meaning that a fully functioning Sears with two levels of merchandise and a Piccadilly Cafeteria, originally opening as Morrison's Cafeteria, are all the retail that remain.  What's even more interesting is that Sears never even updated its mall entrance still sporting its red Times New Roman logo on the mall entrance! 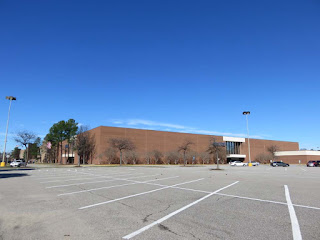 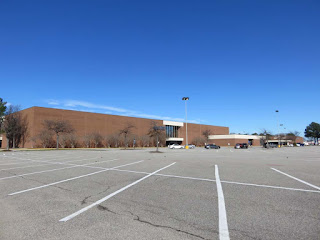 Sears, facing east.  The logo on the exterior was, unfortunately, updated. 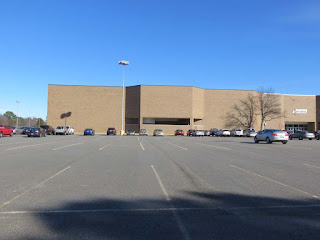 Former Miller & Rhoads, facing south.  It was not a terribly inviting store.

Newmarket North Mall's revival as a business center was successful, but it also looks to be winding down.  The mall has in fact survived longer as a repurposed center than it did as an actual retail mall.  However, the reality of malls as a whole failing coupled with the glut of office space since the 2008 crash has made repurposing malls less attractive with once enthusiastic tenants vying for the shared, affordable office space leaving for nicer buildings.  In addition, the mall's sole surviving anchor is today a very troubled company likely to liquidate within the next 2-5 years meaning that the unyielding survivor is basically feasting on scraps to keep the lights on and doors open.  The rest of the mall closes at 5 PM on weekdays like any other office building. 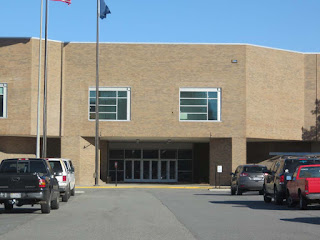 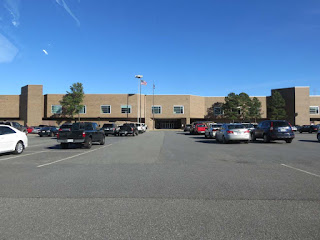 The main part of the mall includes window cuts were a brutalist brick facade was once windowless.  This is the Miller & Rhoads court entrance.

In all honesty, there is not much left to see in the mall as most of its 1980's store fronts have all been stripped away for various office facades.  Nonetheless, the building itself actually outlasted its more successful primary competitor: Coliseum Mall.  The mall today is one of many joining the chapter of failed malls since the 40 year mall boom busted including many in the area.  Coliseum Mall, now an open-air center known as Peninsula Town Center, just lost its Macy's in the former Thalhimer's and Chesapeake Square to the south is emptying out.  Several other smaller malls in the region are also long gone including nearby Mercury Mall.  How much longer will Newmarket North continue to go south before it bottoms out?