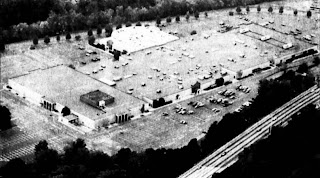 Arial view of the mall in its final days.

It was Northwest Georgia's first shopping mall, and now it is merely a memory. Faced with nothing more than limestone brick and a simple, yet classy 70's modernist exterior, Riverbend Mall opened to the public on September 18, 1975. Original anchor tenants included Belk Rhodes, Miller's of Knoxville, Lay's Variety Store of Cleveland, TN and Morrison's Cafeteria. Most of the stores in the mall, however, were local merchants, most of whom had also previously operated downtown, and it took over a year to completely fill the mall. Morrison's Cafeteria, one of the first, opened at the mall almost a month after the mall did. Costing $10 million in 1975 dollars, the mall was one story, rather small at 330,000 square feet and was typical of the era with a very dark interior including dark brown floor tiles, a dark brown lattice ceiling and the only light in the mall coming from the shops. It was also a basic I-shaped design.

Riverbend was unique in that it was built by a small, local developer in lieu of a large conglomerate. The local Ledbetter family built the mall, and it was designed by architectural firm Stevens & Wilkinson. Stevens & Wilkinson are best known in Georgia for designing all of the Rich's and Richway stores. The mall was built across the street from East Rome High School in what was at the time a largely undeveloped area near the end of a short freeway that formed part of the Rome Connector (U.S. 27 and S.R. 53).

A collection of logos from the original mall. Two Miller's logos are shown here. The second is from after the Allied acquisition. The Lay's logo is original from 1975.

Riverbend Mall was in a strange geographic location, yet very highly visible, where it rested in the 100 year floodplain of the Etowah River wedged on a rather narrow strip of land between Turner McCall Blvd. (U.S. 27) and the river, divided from the river by Riverbend Drive. The original developer owned most of the land around the mall, and the mall was located at the end of a major expressway with high visibility. However, most of the retail development was actually closer to the Garden Lakes area northwest of the city due to the more abundant buildable land outside of the natural floodplain. 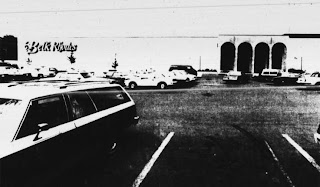 This photo of Belk Rhodes from the Rome News-Tribune was one of several taken for the mall's 10th anniversary on September 17, 1985. 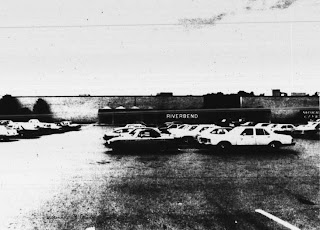 Another shot of the exterior taken for the mall's 10th anniversary on September 17, 1985.

Rome was neither an extremely large nor extremely fast growing city. The location was just right, and not surprisingly, the mall was a raging success. Unfortunately, however, it resulted in the continued decline of downtown Rome. While that was not the intention of the Ledbetter's, the mall was built very close to downtown in a time when downtown was not exactly in vogue. Belk Rhodes, which had operated downtown since 1936, moved to the mall when it opened and closed the downtown store in early 1976. Like most Belk stores of the era, local residents Thelma and Cecil Rhodes ran the stores selling Belk merchandise with the Belk family sharing expenses, so the decision to move was that of the Rhodes family and not of the Belk company at that point. Sears oddly did not anchor the mall, however, but was located on the opposite end of Riverbend Drive as an existing free-standing store. That Sears building still exists today, but the Sears moved from there in 1991 to Mount Berry Square. 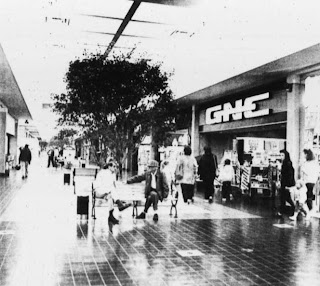 Interior shot of the mall taken for the only renovation. Photo by Angela Turner for the Rome News-Tribune from March 20, 1989.

In the first 15 years, the mall saw a few changes. A movie theater was added to the mall next to Miller's in 1979. Of course, 1979 was also the year of the first of two major floods in Rome that affected the mall. According to a Rome News-Tribune article from September 17, 1985, the flood of 1979 put three feet of water in the mall for six hours. Nevertheless, the flood did not affect the mall businesswise at that point in a city accustomed to flooding problems. The mall just got cleaned up and everything got back to business.

Belk ad from the mall's 10th anniversary. Note the mall logo and no mention of "Belk Rhodes". Only the 1975 ads showed the full name.

The next event to happen at the mall came in late 1985 when junior mall anchor Lay's Variety Store liquidated along with its 20 other locations. JCPenney later filled the location in April 1987, moving from its location downtown. Also in 1987, Miller's parent company Allied Stores, was bought out by Hess's of Allentown, PA. This move resulted in the rebranding of the store as Hess's. In early 1989, the mall underwent an extensive interior renovation. New skylights were added to brighten up the previously cavernous mall, floor tiles were replaced, two hand-made Italian fountains were installed and a new food court was added known as "Food Fair", connecting where a previous rear entrance had existed. The new food court was elevated higher than the rest of the mall out of the flood plain, likely to keep at least some of the mall from re-living the 1979 flood event. It also brought Rome its first Chick-Fil-A. This food court expanded the mall by another 19,000 square feet. 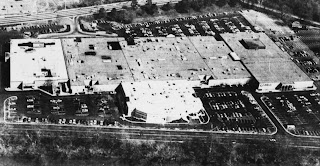 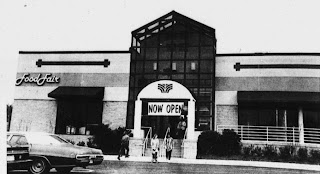 Arial view of the mall with the new food court along with a couple shots of the newly completed Food Fair. Photo by Angela Turner for the Rome News-Tribune from March 20, 1989.

Unfortunately, the rest of the mall was not prepared for the next event and it came only a year later. In early 1990, North Georgia was dealing with its worst flooding in years. In both January and March of that year, the mall was severely flooded damaging stores and damaging the reputation of the mall as well. The Ledbetters took a gamble building the mall in a major flood plain. Unfortunately, they did this because the town itself was always flood prone and had no real ordinances about this. If the mall had somehow been built elevated or the ground under it elevated over the flood plain, perhaps it would still be here today. While the mall mopped up and replaced carpets for continued operation into 1991, the flooding pretty much dashed long-term hopes for the future. A new mall was opening north of the city near Berry College. It would be larger, newer, on high ground and was being developed by the then new owners of Hess's department store, Crown America. 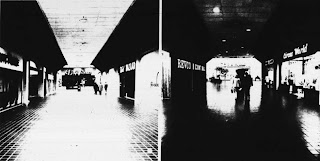 View of mall prior to the first renovation. Notice the Belk Rhodes sign in the background. These photos were from the Rome News-Tribune for the September 18, 1985 10th anniversary.

When Mount Berry Square opened in 1991 and was hardly a replacement for Riverbend. Isolated far from all other development, it seemed that Riverbend could have survived. The problem was, the anchors did not see the merit in remaining in an a small, aging mall where they might be flooded again. Belk Rhodes had promised in 1990 to keep two locations, but this was only a half-kept promise. JCPenney did not hesitate to leave the mall, but Hess's was in a lease at the mall into the late 1990's, so it stayed along with Belk Rhodes. 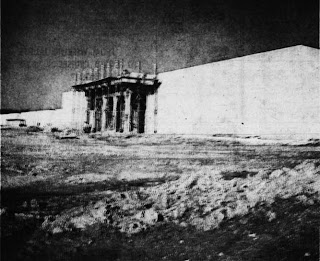 Grainy photo of the original construction of the mall from 1975 (Rome News-Tribune).

1993 was the beginning of the end for Riverbend. The new mall was having a very real effect on Riverbend by this time. Belk Rhodes hung on a couple years before replacing the Riverbend store with an outlet in late 1993. Also, early in the year Hess's was sold off in pieces with the northern division going to Bon-Ton and the southern stores mostly to Proffitt's...except one. Yes, a Bon-Ton found its way into the old Hess's at the mall. This was the ONLY Bon-Ton store in the entire chain to be located in Georgia, and it was indeed looked like an afterthought from the day it opened. Indeed, the store opening there was due to Proffitt's lack of interest in the location, but most likely due to the lease requirements.

Over the next several years the once successful mall began to empty out. Unfortunately, the only real reason that Belk Rhodes and Hess's/Bon-Ton were even there was that they were bound to their leases. While the renovation helped to keep a two-mall scenario in a town with less than 150,000, the mall itself was in the midst of a mass exodus that left only a couple store in operation after 2000. In 1995, the Belk Rhodes outlet closed at the mall when their lease expired. In 1998, Bon-Ton also left the mall once their lease also expired. The store was a financial strain on the company with a location extremely far from its home base.

In 1998, the owners considered options of what to do with the empty mall. A medical mall idea was proposed, and Coosa Medical Group then opened in half of the old Belk Rhodes. Morrison's Cafeteria was one of the last tenants there, and left the mall that year for a free-standing location. CVS pharmacy, located in the former Revco, also hung on to the end. CVS had an outside entrance in front of the mall, so they were not dependent on a mall with no traffic for business. The former JCPenney also saw continued life as Heilig-Meyers furniture, which eventually failed with the entire chain by 2000. Ford's Furniture replaced Bon-Ton, and it remained at the mall until it was closed for demolition. By 2002, the 27 year old mall was sent to the retail graveyard.

Demolition began in 2002 of the mall, by then a sad sight. The mall without any real anchors or interest looked bland and forelorn. In its place is a bustling strip center that oddly carries much of the same tenants that could have been modern tenants in the mall. Oddly enough, though, the ghost of Riverbend lives on as Coosa Medical Group refused to give up their offices in the back half of the Belk Rhodes. As a result, that one part of the mall was allowed to remain. It is all particularly strange to me, because this is the exact way we entered the mall years ago. It is also strange to see a strip mall there today that draws crowds like Riverbend once did...and built by none other than the original developers of Riverbend Mall. 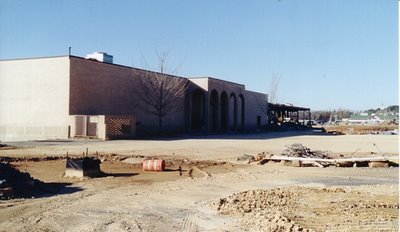 Photo from late 2002 of front view of Belk Rhodes at Riverbend Mall during demolition. A Kroger now stands at this site above the flood plain.

Today, Riverbend's replacement is as successful as the mall the day it opened in 1975. Likewise, the city itself that Riverbend replaced has revived. Meanwhile, the mall that replaced it, Mount Berry Square, is struggling. Today, simply "Riverbend" features a Kroger, Barnes and Noble, Ross Dress for Less, Pier 1 Imports and mall tenants such as Hibbett's Sports and others. The "brown mall" lives on: just not as a mall.

Note: Rome News-Tribune archives were used for much of the information and all but one of the photos provided here.