It was the first major shopping mall on the southside of Atlanta and the second enclosed mall in Georgia. When Greenbriar Mall opened on September 23, 1965, it brought first-class shopping to the largely overlooked southside. Flanking the then under-construction Lakewood Freeway (SR 166) and I-285, the mall opened with anchors Rich's, JCPenney and Piccadilly Cafeteria. JCPenney moved there from its smaller, undersized location located at open-air Lakewood Mall on the other end of the new freeway. The Rich's there was the fifth suburban location and offered three floors of merchandise, further drawing traffic from the downtown store. Greenbriar Mall also became a landmark, because it was the site of the very first Chick Fil-A, which opened there two years later in 1967. Chick-Fil-A itself was founded in nearby Riverdale as a local diner, so this was the nearest location for their new store concept, which grew dramatically since and has remained a staple of malls today. A Chick-Fil-A continues to operate in the mall today, though not in the original location. 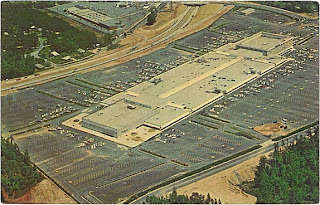 Arial shot of the mall from a 1965 postcard. Image is from Malls of America.

Greenbriar Mall was typical of most early shopping malls: two multi-level anchors, one story and an underground section of the mall used for offices and a bowling alley. The presence of a bowling alley in this mall was not known, however. Also like the original malls of the era, the mall contains stores only accessable from the outside as well as in-line tenants. Since the mall opened, it had an interior renovation in 1987 and an exterior renovation in 1997. Also, Greenbriar Mall was distinctly positioned to be a major mall at the intersection of two Atlanta belt routes. The problem is that one of those, I-420, was never completed and the designation canceled. This would have made a by-pass for I-20 extending from Douglasville to I-20 east of Atlanta including the completed Lakewood Freeway. If that would have actually helped the mall, though, is unknown since the project was canceled in 1983. 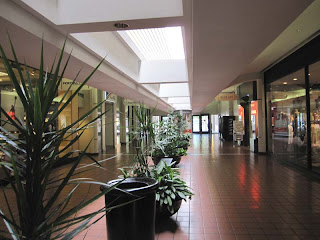 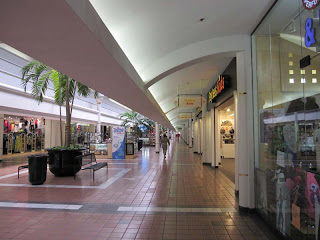 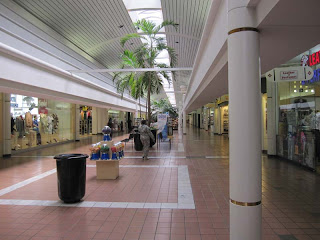 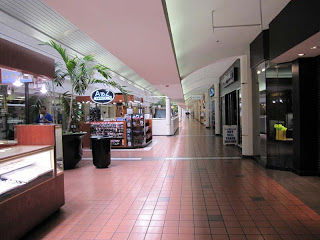 Looking along the main mall concourse. The first and third photos show detail of the open-air mall-like overhang and the last of the skylights. The original makeup of this corridor was likely much boxier. The last photo shows the escalator/stairs to the small basement level in the background. 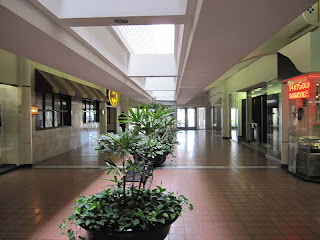 Looking at the northwest entrance corridor. Piccadilly Cafeteria is on the left, and it still looks somewhat gothic on the inside. Outside this entrance is an outdoor sidewalk that leads to the former Circuit City building and entrance.

While the mall maintained stable tenants for the first 20 years, the mall began to see many stores come and go. However, these were met with a strong local interest and investment to keep the mall viable. JCPenney closed there location on September 28, 1985 after 20 years of operation. The local community met the closing with protests that included then-mayor of Atlanta Andrew Young, but to no avail. However, the mall has kept this location filled since aside from a couple brief periods of vacancy. In 1987, Upton's took over the former JCPenney along with the opening of a new Circuit City outside the mall next to JCPenney. Later, in mid-1992, Cub Foods opened a location on a mall outlot facing Lakewood Freeway. Unfortunately, later in 1992 both Upton's and the McCrory's in the mall closed for good, but the mall continued to move forward. 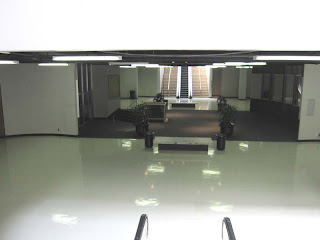 Coming down the escalator to the small lower level basement area. Escalators and steps back up are visible in the background. This area is today used for mall offices and conferences. 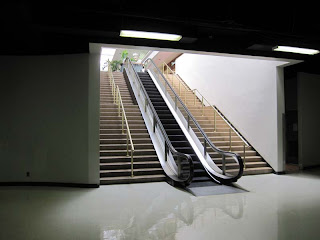 Looking back at the down escalator and stairs from the main mall level. 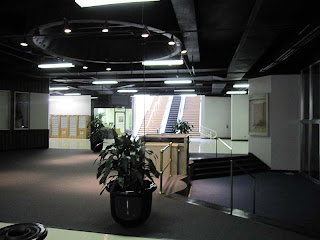 Blurry shot with detail of the downstairs level. The mall management office is the lighted room on the left. 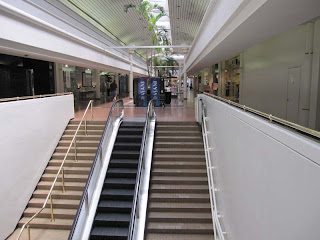 Looking at the up escalator and stairs back to the main mall concourse from the main mall level. A barrier is placed on three sides.

In 1995, the former JCPenney site was resurrected again, bringing Burlington Coat Factory in as an anchor. While not what the mall had hoped, it has been a lasting anchor in the mall. The Burlington Coat Factory opened on September 1st of that year and remains today. In November 1996, former basketball star Magic Johnson opened his Magic Johnson Theaters on the southwest outlot of the mall. Magic Johnson had a personal interest in the area, and its opening created a lot of press at the time. Also, at some point during that time an IHOP was added on the southwest corner of the mall connected to south side of the Burlington Coat Factory. Still, that did not mean the mall did not have new challenges to deal with. Cub Foods closed in 2001 along with all of the other Georgia locations and remains vacant today. In addition, Circuit City closed at the mall when it relocated to nearby Camp Creek Marketplace in early 2006. 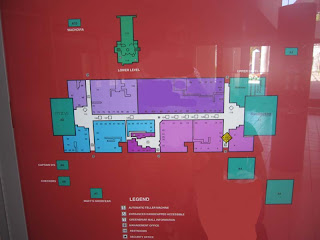 Current mall directory. The basement level is shown above the main mall map.

When Camp Creek Marketplace opened, it was the first major retail development in the southside since Greenbriar itself opened. In an area shunned for retail because of a predominantly African-American population, this was a very big deal. The problem was that it also was competing with the mall for business, which has led to redevelopment talks. In 2006, a redevelopment plan was announced after Hendon Properties bought 50 percent interest in the mall in conjunction with the existing owners. The discussion is to redevelop the mall most likely with a lifestyle addition similar to other Atlanta malls as well as attempting to upscale the mall. What also helps the mall is the strong commitment that Rich's, now Macy's has to the mall. In 2001, Rich's owners Federated Department Stores signed a 10 year lease with the mall. Recent renovations to the store inside and out prove the company's commitment to Greenbriar Mall. 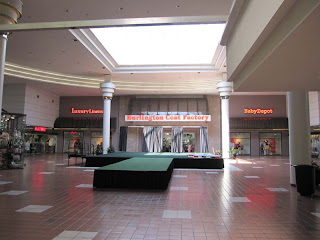 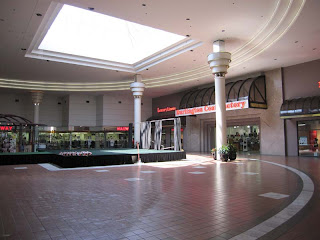 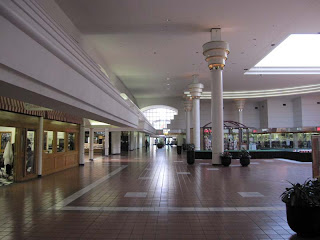 Burlington Coat Factory mall entrance and BCF court. This was Penney's from 1965-1985 and Upton's from 1987-1992. Note the Upton's design elements. Also note the Maxway in the court. Maxway is owned by the same company as Rose's, but is located in urban neighborhoods. In the last photo, the northwest entrance court (behind me) leads straight to the southwest entrance court (ahead).

Much fear has surrounded the future of Greenbriar Mall for over two decades, however. By the mid-1980's, the neighborhood around the mall had transitioned from a predominantly white to predominantly African-American community. Stores and businesses in the area began to close all around the mall, and the fear in the time was that the mall was in danger of failure. In that era, the mall attained a strong image as ghetto, and the closure of JCPenney at the mall caused panic. The funny thing is that the new community around the mall really cared about what was going on and was determined to keep that from happening. Since that time the mall has continued to maintain high occupancy, and the neighborhood around the mall has seen substantial improvement in the past decade. A new Kroger was built near the mall and empty shopping centers found new tenants. 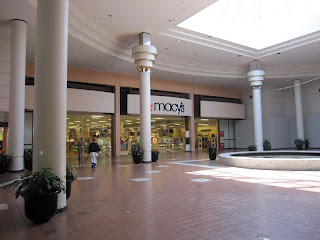 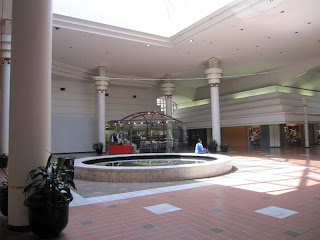 Rich's/Macy's court. This photo was taken at a better angle and further back than the previous Rich's photos I took in 2005. See below for actual Rich's photos. The second photo is looking back into the court. The fountain had water in it, but for some reason was not operational. BCF court had a fountain, too, that was covered.

However, that is not to say the mall does not have its problems. The community is looking to erase these problems, but notorious events that tend to be difficult for any mall. However, these can be overcome such as the food court shooting incident at Perimeter Mall in 1989. Perimeter Mall is alive and very well today, and to say there is no urban element at the mall is blind, but it is the third most upscale mall in Atlanta. Nevertheless, Greenbriar is still ranked highly as one of the most dangerous malls in the nation, likely due to incidents such as the Freaknik looting of the Rich's in 1995 and the recent murder of two teens by a gunman at the mall in 2008. Is this a deserved bad reputation or just a media misperception? It is a bit hard to cast a completely positive image to the city as a whole when the mall has hardly any white customers and shoppers of higher income, regardless of race, have reservations about shopping there. 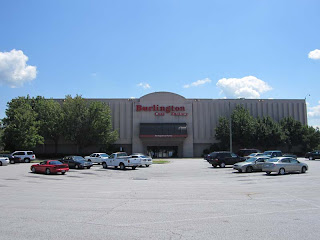 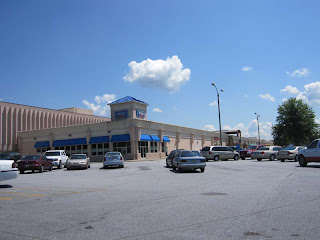 Outside view of the JCPenney/Upton's/Burlington Coat Factory. The ribbed design is original, but the greenhouse design is all Upton's. The second photo shows an IHOP making up the southwest corner in front of the JCPenney. Apparently JCPenney never had an entrance on this side.

Greenbriar today is on the inside actually a very attractive mall in a convenient location. Its interior decor and history make it appealing above many other malls in the city, but it remains a mall that caters exclusively to an urban demographic. Don't expect to find American Eagle, Old Navy or H&M in the mall, but do expect to find the mall is doing much better than people will tell you. The mall is full of stores and gets plenty of customers, but those in the area with more money are driving past it to better shopping. Southlake, another predominately African-American mall, has a lot of the trendy national clothing stores. All of those left Greenbriar before 1990. 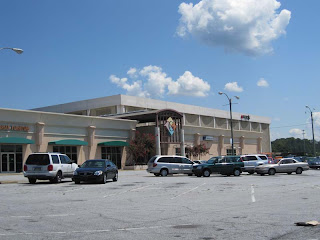 The Lakewood Freeway side has many shops open only to the outside of the mall. 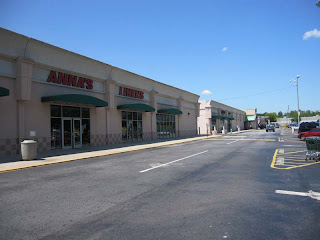 Southeast mall entrance with outside shops on the left and Rich's/Macy's on the right. A Rich's labelscar is still visible next to the Macy's sign.

Maybe I do not understand the market well enough, but I have to wonder if this mall can support better stores than urban fashions and knock-offs considering that there is a much larger middle class population in the area than in the past. Would a store like Belk or a return of JCPenney make it at the mall? For the time being, the mall is doing quite well considering its challenges over the past 24 years. When Macy's lease runs out in 2011 will its fortunes stay bright? As its age approaches half a century, it is hoped the mall never gets a post on deadmalls.com or ends up in the retail graveyard like comparable classic River Roads Mall in St Louis did. Of course, all of that depends on if the neighborhood is really on its way back and further investment in the mall is successful in making it competitive against Southlake and a potential comeback of Shannon. 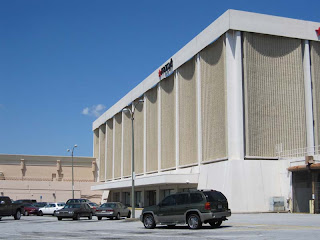 Exterior view of Rich's/Macy's from lower level south entrance. Most of the glass display windows are covered up and extra entrances sealed off. It is wondered if this was done in response to the 1995 incident. 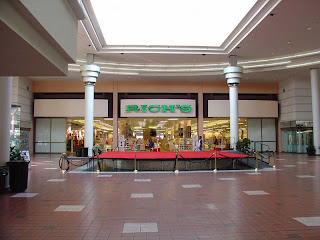 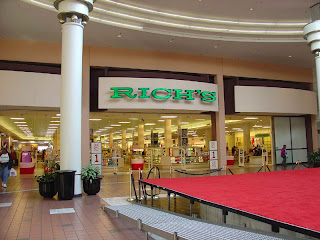 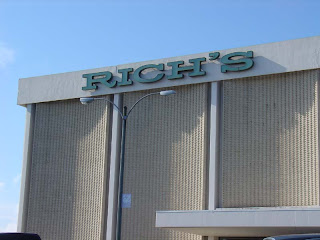 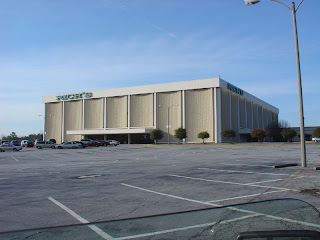 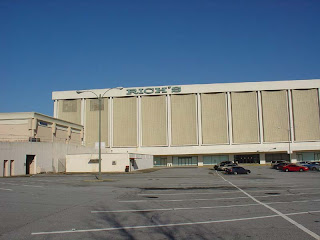