I've waited quite awhile for these, but looking back you have to admit that pretty much any TV from the early 80's was pretty cheesy. Hope you enjoy!

Richway Back to School ad from Fall of 1982.

Is this Lake Lanier or Lake Allatoona? Remember, Richway was headquartered in the old Rich's building the whole time even after Federated bought them, so an ad featuring a local man at a local lake was not unlikely.

Also, maybe I'm imagining it, but I swear I recall a Richway ad from the late 1980's playing the intro part of Laura Branigan's "Gloria". Since using pop songs in ads is nothing unusual today, I wonder if my memory served me right. I was a little kid then. Thanks, J, for the heads up on these!
Posted by J.T. at 10:08 PM 6 comments:

Here is a treat for what I found to be more than a few people sentimental about Richway. A contributor who chooses to be known only as "J" sent me scans of a flyer made in 1983 for Richway. The story is that he found this in an attic of his grandparents house along with a newspaper from that era. In all, they are very well preserved. Also, he included a low resolution scan of a postcard for the Atlanta Expo Center, which I have outside pics of. The Atlanta Expo Center, located on Jonesboro Road today fills what had been the Richway in addition to the Treasure Island/Home Depot locations mentioned in the previous "Treasure Island" post. 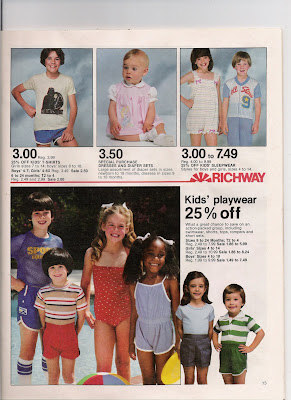 In these pics, I am largely including ones with the logo, but will include a couple others for amusement. You have to admit that times sure have changed since these pics. 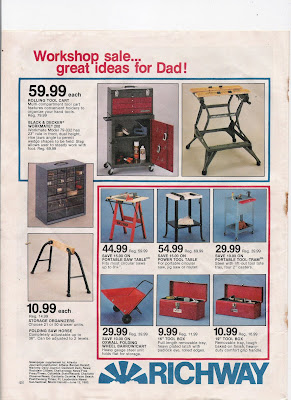 I'm guessing Richway had a better selection of hardware than snob-appeal Target that took its place did. Nevertheless, I've heard both are very similar in many ways, though obviously Target is much less fun. 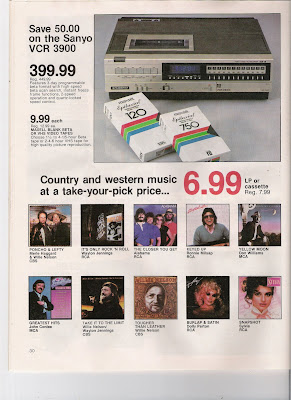 How about a $400 VCR? And this is in 1983 dollars, folks. Also take your pic at Urban Cowboy overkill for $6.99 on your choice of LP or cassette so you can go and replace them all with CD's ten years later just to download them illegally another 10 years later. 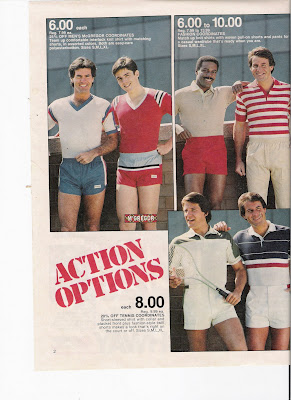 One thing you've got to admit: since the 80's the men's shorts have gotten longer and women's a lot shorter. Considering the big gay rights push since the late 80's, it is definitely no coincidence. It's a reaction that mirrored the disco backlash a couple years before this ad. Can you imagine most men being caught dead in most of this stuff today unless they were running on the cross country team? 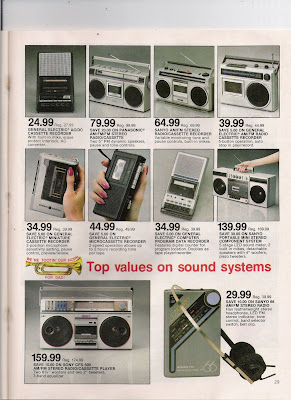 Hey buddy, you want THAT much for a boom box that doesn't come with high speed dubbing? No way, man! 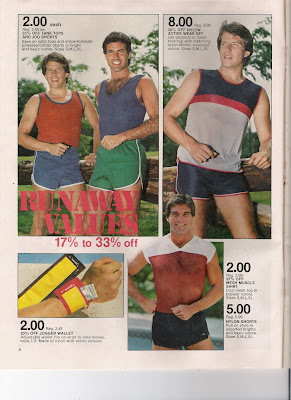 Nice moehair suit, fella. Imagine the days when you could be a hairy bastard and still be considered smoking hot? I wonder if that guy later joined the other silver hair dudes in a new Vette hoping to land a girl half his age. 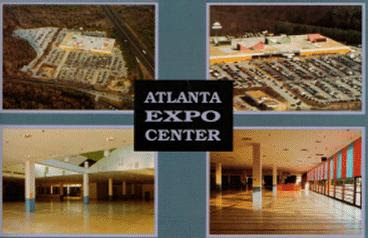 Also provided here was this postcard of the Atlanta Expo Center featuring our most well-preserved Richway off of Jonesboro Road. Just don't go there at night. 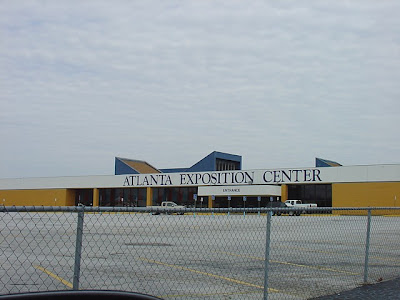 Here is a close-up outside shot of the Richway on Jonesboro Road taken by yours truly. I understand this was the only Richway not to make it into a Target. That says a lot about that area, unfortunately.
Posted by J.T. at 12:32 AM 37 comments: