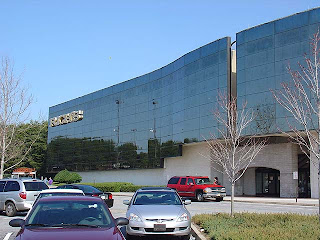 The guys at Labelscar saved me the trouble on having to go back to Gwinnett Place again. In 2006 I was working during the summer while in college as a driver. The car I was driving wasn't in the best repair, and the car quit on me while there. While it turned out to be something that I overlooked as a result of their poor maintenance, I managed to find myself stranded at the mall for several hours. I pretty much visited every angle of the mall, but failed in that opportunity to photograph it since I obviously wasn't there for pleasure. My lack of mechanical abilities didn't bode well for that job, either. 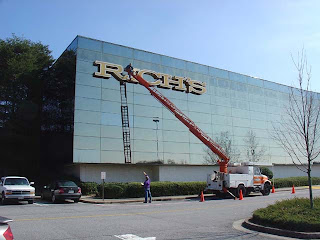 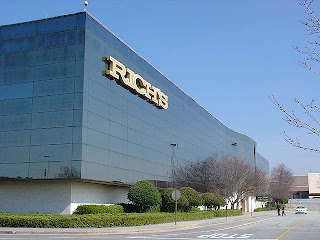 On the first photo, sign crews begin removal of one of the signs near the west entrance. The second photo shows another side-angle view of the south entrance.
For those in Atlanta, everyone knows that Gwinnett Place has seen its better days. The traffic around the mall is more chaotic than anywhere in the entire city, and traffic jams getting onto Pleasant Hill Road from I-85 (ironically named road the mall is on) will leave you sitting for a half-hour. The scene around the mall is also my least favorite, too. The area around the mall is disected by huge high voltage lines, which makes the place seem very ugly and makes the fact it is nothing but sprawl city stand out even more. 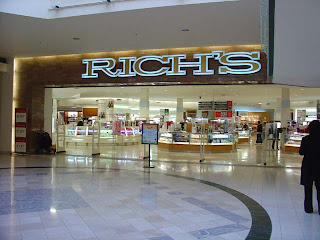 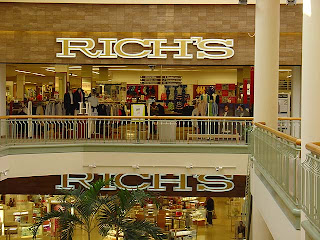 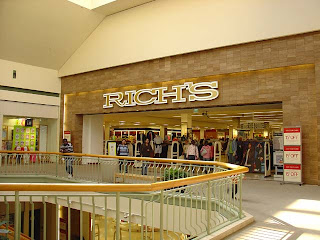 Photos of the mall entrance. The top photo is of the first floor with more visible backlighting. The second photo was an attempt at a shot of both floors simultaneously. The last is a view from the second floor.
However, before the 2006 incident I still braved the area traffic to come and photograph one of the very last of the Rich's stores to still be flanked with the Rich's logo during the first couple months of 2005. For those of you who know this store, this is the unique Rich's store completely covered in black glass that today leaves a very obvious labelscar from when it was Rich's. The Macy's that is there now was previously in the old Davison's store, now being renovated for an Asian discount/department store known as Super M Mart. When I took those pics in 2005 and 2006, the store was still known as Rich's-Macy's. 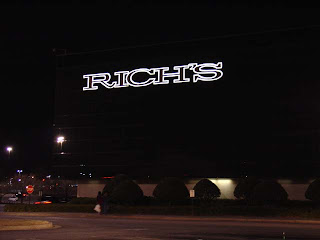 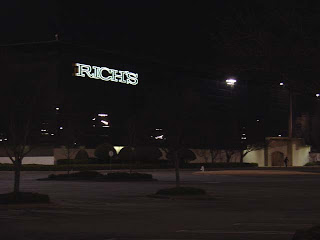 Night shots of the sign next to the dark glass exterior. Note the street lights reflecting on the side of the building. I wish I had a better camera when those were taken. 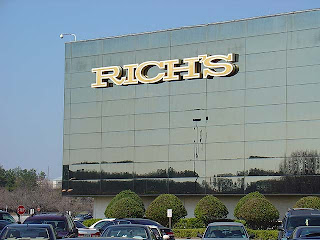 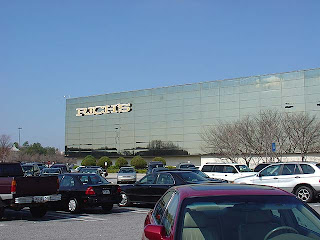 More exterior shots of the Rich's in the daytime with greater emphasis on the sign in the first shot.
The Rich's pics here include outside and mall entrance photos. While the outside is amazing, the inside mall entrance is less impressive. I have also included pics of the Rich's Furniture Store on the outlot. 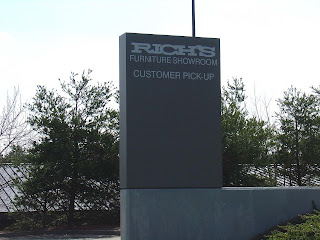 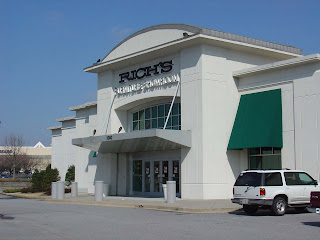 The Rich's Furniture Showroom is located on an outlot close to the Sears: nowhere near the Rich's itself. It was very obviously built later.
Posted by J.T. at 4:16 AM