We all have heard the terrible, tragic news about Tuscaloosa, and this is all the more stunning for me since I have made many visits to Tuscaloosa over the years including a trip this last March to document all the malls there.  McFarland Blvd is normally an extremely congested thoroughfare, and covering what I did with the traffic was difficult.  I would have covered more, but time constraints made me stop.  Now, I wish I had covered more after the news.

This amazing and eerie video was taken by someone sitting in the west parking lot of University Mall.  It is obvious the mall sustained some damage, but it was far worse just to the north of the mall.
The truth about Tuscaloosa is that this kind of weather was unfortunately to be expected.  The area near I-20/59 from southwest of Tuscaloosa to north of Birmingham has a very long history of violent F4 and F5 tornadoes.  In 2000, an F4 tornado hit very close to McFarland Mall, heavily damaging a then-new Winn Dixie under construction and flattening million dollar homes in a hilly subdivision nearby.  Thankfully, that tornado missed the main business district, but this one clearly did not.  The 2000 tornado was featured in a famous video captured from towercam that won Birmingham meteorologist James Spann an award that year.  Sadly, this remains one of the deadliest stretches for tornadoes in the United States, and this all came to a head on April 27, 2011.


Here is a view along 15th St just west of McFarland.  I have heard that this scene no longer exists.  I planned to try the Taco Casa right here when I was there, but decided not to go.
Keeping track of the news, I have been trying to gather information on what retail establishments were affected.  I found this aerial, which shows the exact path.  Originally, it was reported that University Mall was destroyed, but this video as well as the linked aerial image above proves that the mall was mostly out of harms way, and definitely NOT destroyed.  However, no information on the status of the mall has been posted anywhere.  The tornado itself actually went just to the north of the mall, affecting everything from the intersection of McFarland Blvd (US 82) at 15th St to just north of Wood Square Shopping Center.  The main part of the storm, in fact, crossed the northwest corner of that intersection obliterating everything there.  I had previously reported on my Meadowbrook Mall post that Wood Square was where Wal-Mart, and originally, Kuhn's Big K was located.  That strip was completely destroyed.


Corner of McFarland and 15th.  Everything you see from this CVS back along McFarland...gone.
Sadly, everything between 15th St and Wood Square Shopping Center was severely damaged or destroyed as well.  It is still available on Street View, but it is completely gone.  Many, many retail establishments were demolished including the CVS Pharmacy at the NE corner of 15th and McFarland.  Further west on 15th, most every single fast food restaurant on the south side of 15th was wiped out or damaged beyond repair.  This included the McDonald's, Hardee's, Smoothie King, Schlotsky's Deil and the Taco Casa.  The new lifestyle center (Midtown Village) across from the mall may have also been damaged, but it looks to have very narrowly missed it.  For now, I am including some "before" street view scenes to view what was there before the storm.  I would also like to know what is gone more specifically.


Wood Square Shopping Center the way it was 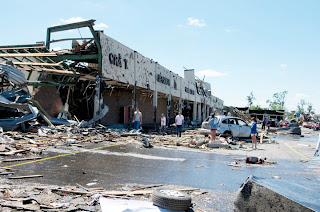 Wood Square Shopping Center now.
In all, I am very saddened by this disaster and hope that nothing like this happens there again for many years.  Tornadoes are an unfortunate part of living in the South despite the beauty to be found in so much of it.  I am at least glad that it did not make a direct hit on popular University Mall, or the death toll may have been much higher. I also felt that since so many retail establishments were destroyed that it was important to report this angle here.
Posted by J.T. at 9:58 PM 7 comments:

In this weeks severe event, a large tornado came through significantly damaging Sanford, NC and many other cities near Raleigh.  The storm in Sanford wiped out the Lowes store on April 16, 2011 also damaging the Tractor Supply across the street.  Here is some information on both.

View Larger Map
Before image of the store from Google Street View
The worst part of this was the timing.  It was a busy Saturday with customers and employees inside.  Many cars were totaled as well.  My sympathy goes out to all the victims of the storm.  More information can be found on WRAL about the tornado, including Lowes.  More photos can be found here, here and here.  The whole gallery can be found here.

Video from the The Sanford Herald.
Across the street, Tractor Supply Store, located in part of an old Wal-Mart, was heavily damaged as well.  Included here is an earlier photo from Digitalsky showing the store prior to the disaster. 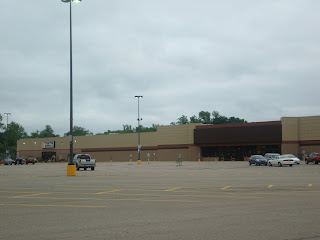 Photo by digitalsky taken June 2009 of the old Wal-Mart and Tractor Supply on the left.
Here is some video from WRAL showing the store destruction from helicopter and ground:
Posted by J.T. at 11:36 PM 6 comments: