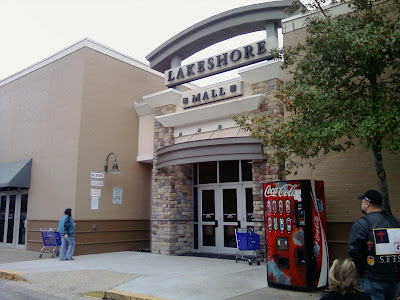 One of the updated mall entrances (Kevin Hicks: photo).

North Georgia's small town malls tend to be overlooked, especially those located within 30 miles of insurmountable competition down a 70-mile/hour freeway. Thus is the case with Lakeshore Mall in Gainesville. Gainesville itself has had a stormy history (pardon the pun) considering its downtown was flattened in 1936 by what was obviously an F4 or F5 tornado that caused much death and misery and left the downtown area nowhere like it once was. While the city has long since recovered, it sits in a rather odd position. First, it is located near, but not on, a major interstate. Travelers can get to and from I-85 to the south, but to get to I-85 to the east requires travel along surface roads, all which were two lanes until very recently. I-85 was once planned to go through the city but politics of the era directed it southward, resulting in compromise GA 365, which eventually became I-985. Second, the city is a city to itself, but has become a fringe suburb of metro Atlanta with countless new subdivisions constructed to the south and west since the 1990's. These problems have created a dubious position where the city went from a small North Georgia city far removed from Atlanta to a city blending in with the metro...not a good shift for its local mall. 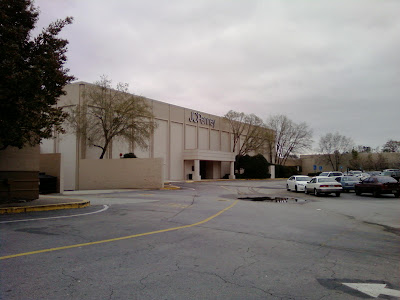 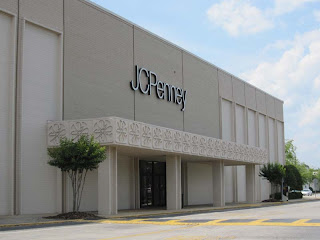 Photos of classic 1968 Penney's. This one undoubtably had the old logo with the blue "P" when it opened (Kevin Hicks: first photo).

Lakeshore Mall was constructed in 1968 and named for nearby Lake Lanier completed 11 years earlier. It was also relatively close to when GA 365 was completed to Gainesville located along GA 53 Connector. As one of the older malls in the state, it faced no immediate competition considering the nearest mall at that point was in Dekalb County over 50 miles away...a situation that remained for 15 years. A town built around agriculture, namely poultry, the mall catered to a more rural demographic from the start meaning more value-priced stores. 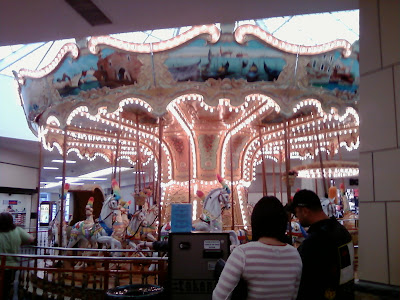 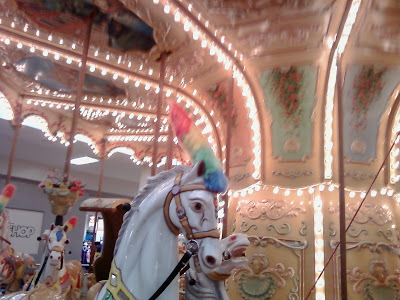 Close-up photos of the carousel on the Sears wing (Kevin Hicks: photos).

When first opened, the mall contained three anchors: Belk, JCPenney and Rose's Discount Store. It was a typical late 60's mall with high windows in lieu of skylights, a one story simple design, lots of brick and earthtones and very small. A later expansion resulted in a new addition on the other side of JCPenney with a Sears. This new addition resulted in mall patrons being forced to walk through the JCPenney to get to the other side of the mall...similar to what happened to Macon Mall in Macon. This addition was likely done this way because of the extremely hilly terrain...meaning that no other direction of expansion was possible without enormous cost. 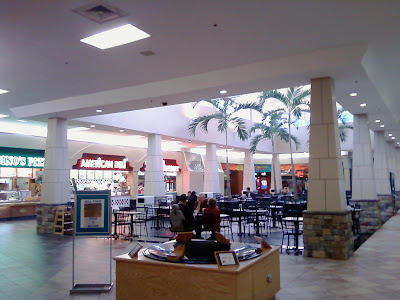 The mall's food court. I found it a bit of a disappointment in its lack of any major chain restaurants (Kevin Hicks: photo)

Anchor changes were slight over time. Aside from the Sears addition, the Rose's eventually closed and was replaced with a second Belk store that allowed an expanded footprint in the mall. It is interesting that the old Rose's Garden Center area is still intact, but basically is just a place for light storage today. Lakeshore Mall is not located in an impoverished area. Despite many typical urban issues facing the city today, the mall has one of the highest demographics near the mall which would seem to support a higher-end mall than what is there. Unfortunately, that is not the case. 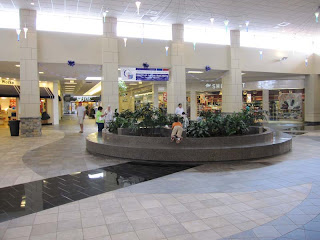 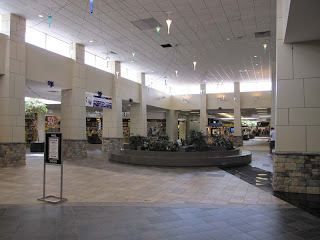 Photos of the center court. This is one of the most attractive contemporary center courts I have run across. Note the Belk Home & Kids (Rose's) behind the first photo.

Lakeshore Mall since the 1980's has struggled due to much larger, far superior malls coming ever closer to the simple mall. This began in 1984 when population growth fueled by white flight from DeKalb resulted in the construction of Gwinnett Place Mall in 1984, only 35 miles south. Gwinnett Place today is facing creeping urban blight, but at the time of its construction was a showplace featuring two floors and four anchors including Rich's and Davison's. Lakeshore didn't have either of those stores, and those who had the money to shop at Gwinnett headed south for more stores and selection. This was even further complicated in 1999 when Mall of Georgia...the state's largest mall and tourist attraction, trumped Gwinnett Place and was built five miles closer! In most circumstances, this would have spelled doom, but the mall has had some help from the huge Hispanic immigrant population. They have done a nice job keeping the mall viable, though this has very obviously reduced traffic from the otherwise predominately non-Hispanic county. 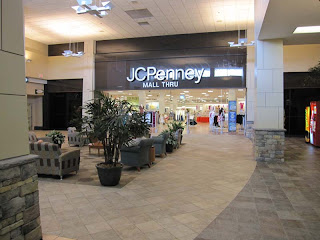 JCPenney is not just a mall anchor: it is PART of the mall. To get to the Sears wing, patrons have to walk through the Penney's. Since the mall is on a hillside, this is likely the reason for this design.

In 2006, the mall saw its first major renovation in quite some time. Looking rather run down before, the mall got a huge facelift inside and out, and despite the rather grim outlook presented here, the mall has not lost a single anchor store. The problems with the mall or more of an in-line issue...an issue that has resulted in so many other malls being demalled. That issue is where the anchors do good business, but the stores in the mall are increasingly mom and pop and not commanding the rents and traffic that nationals chains offer. When I visited during the renovation, the food court lacked most national chains and I failed to see many of the trendy clothing stores present in other malls throughout the rest of the mall. Most chain stores were more of the non-clothing variety. The Books-a-Million, however, seemed to be doing well and the Ruby Tuesday continued to attract business. Unfortunately, the Ruby Tuesday there has since closed. The author is guessing the Ruby Tuesday originally started as a Morrison's Cafeteria...both once owned by Shoney's. 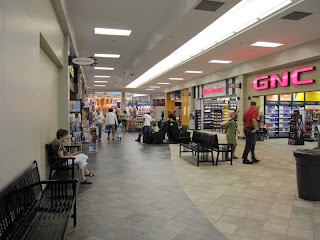 Looking back along the Sears wing with Sears behind me. It is very odd how a mall so little known by most of the people in this region is so viable, but the scene here proves it is. This was the middle of a weekday!

Today, I honestly could not predict the future of the mall. The mall is in a strange location pretty far from I-985. The retail corridor around it remains viable, however, and to me the unfortunate thing is that it has become more of an ethnic mall than a mainstream shopping destination. Nevertheless, if that is what it takes to keep the mall viable, then what works should be done. It is nice this day in age to see a few classic-era shopping centers still functioning when the average mall built prior to mid-1980's has either been radically modified, demolished or de-malled. 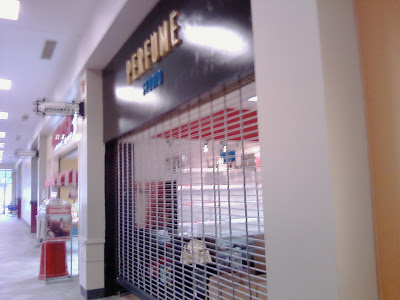 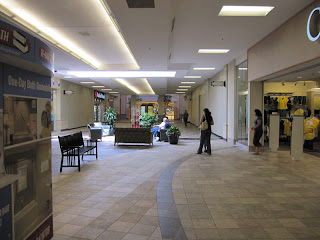 Looking along the Belk wing towards Belk Women's 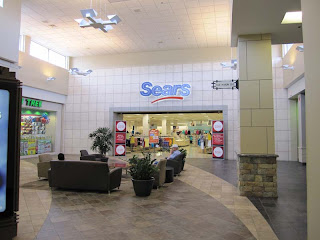 Sears mall entrance. The Sears was built later than the rest of the mall. 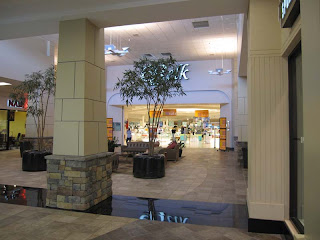 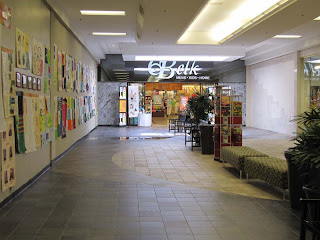 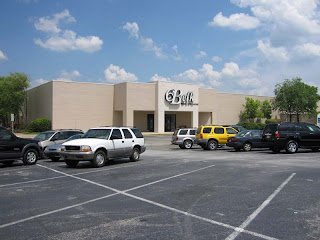 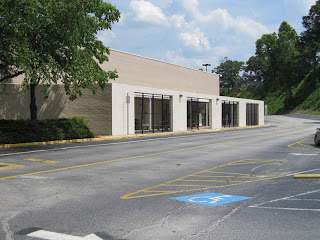 Belk Men's, Kid's and Home. This store opened as a Rose's, but this fact is only noticeable on the outside. The inside has been completely remodeled to a typical department store. Note the former garden center on the second photo. 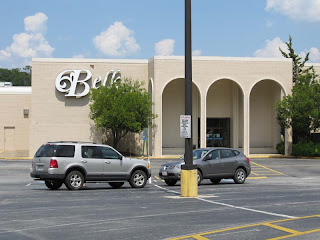 Original Belk store. Stores built in the late 60's and early 70's by Belk had this arch design typically. This store was previously white and painted tan in the last renovation.
Posted by J.T. at 7:28 PM 23 comments: