The strangest mini-mall I have ever run across is Northgate Mall in Tullahoma, TN. As the only mall in the southern portion of Middle Tennessee, the mall first opened for business in May 1976. Original tenants to the mall included TG&Y Family Center, Readmore Book-n-Card, Treasury Drugs (a division of JC Penney), Kroger, Ann Herbert Dress Shop, Bonanza Restaurant, Sound Shop, and Horner-Rausch Optical. The Castner-Knott department store opened at the mall in early 1977 [1]. Even though it has the appearance of mall originally converted from a strip mall, it was indeed an actual enclosed mall to start with, but it seems strange a mall would be developed in such a fashion. 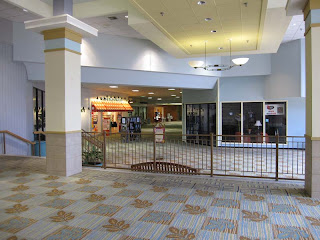 Looking back from the Dillard's/Castner-Knott entrance through the mall. The mall doesn't go too much further beyond what you see.

Northgate Mall until 2009 was anchored by Dillard's, JCPenney, Goody's and Big Lots. The mall only has 15 stores aside from those anchors including tenants such as Bath & Body Works, Claires, a jewelry store, an Army Recruiting Center and a Ponderosa Steakhouse, which had already closed for good when I visited. Dillard's closed in March and Goody's closed at the beginning of the year. The Dillard's at Northgate Mall was originally a Castner-Knott, which Dillard's bought out in 1998. Big Lots originally opened as a Kroger, which left in the late 1980's or early 1990's for a then Wal-Mart anchored shopping center just down the street. The mall even has its own website, which gives a pretty good idea of where it stands today. 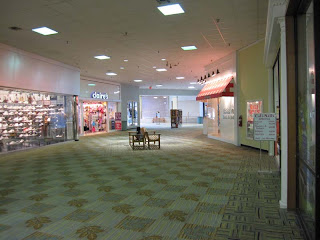 Here is the most active part of the mall. While there are a couple other stores/tenants, this area has the most. Not pictured on the left is the Foot Locker. 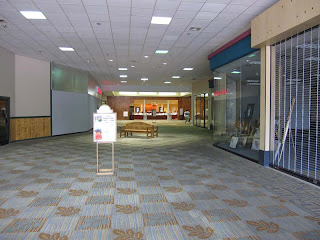 The middle entrance corridor is not faring so well. The Ponderosa (not pictured on the left) closed up awhile back. In the background is a jewelry store and a nice skylight area I failed to get a picture of.

When I assumed that the mall started as a strip, I was noting how the mall space is essentially a corner of what would have been front-facing strip mall stores that were enclosed into a mall. In fact, the mall entrances only open on one side, which is the side facing N Jackson St (US 41A). US 41A is the main route through the city. Similar to Three Star Mall, Northgate also has a couple anchors with no mall access including Big Lots (in an old Kroger) and JCPenney. No stores have rear entrances (except a JCPenney customer pick-up), and only the Dillard's had a side entrance. Part of this design is the very narrow strip of land it is built on. On the entire length of the rear is NW Atlantic St, a street that is paralleled by railroad tracks and prevents any expansion or general public entrances on the backside. 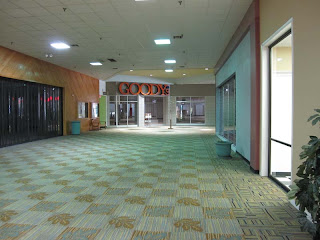 This end was hurt by the closure of Goody's at the beginning of the year. The Goody's was all that stood in the way of JCPenney having direct access to the mall. 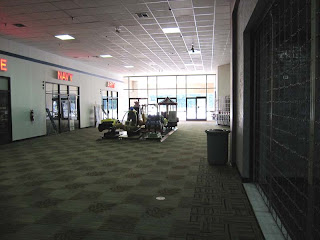 The sole remaining tenant on the south entrance corridor is the military recruiting office. I imagine it is extremely popular with the local youth trying to escape this town.

Overall, Northgate is truly a community mall, and it is fairly obvious that the owners take its success very seriously. The mall on the inside has been completely renovated very recently, and the main mall entrance has been entirely upgraded. The new main (middle) entrance is actually quite elegant, but the other two entrances have not been changed. I was actually pleased to find that the mall had retained a few A class tenants despite it being far from a traditional shopping mall. While this mall is not nearly as appealing as Three Star Mall, it still is a decent shopping center in desperate need of modification for continued success. 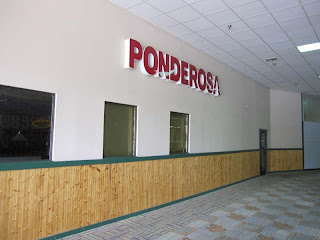 The sign remains on the Ponderosa Steakhouse. It is not certain when it closed. 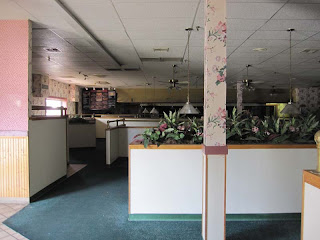 Inside Ponderosa, it looks like they just closed for the evening one day then never opened back up again.

Dillard's and Goody's leaving have left the enclosed mall portion in a very vulnerable state, and if the management fails to handle this crisis properly the mall will die quickly, either forcing a costly redevelopment or leaving a blight on the city. Obviously, the property presents challenges to any proper expansion, but the city is not large enough to support a mall much bigger in the first place. While it might seem best to just convert it into a strip mall, I do not feel this is necessary. 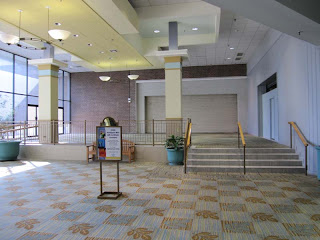 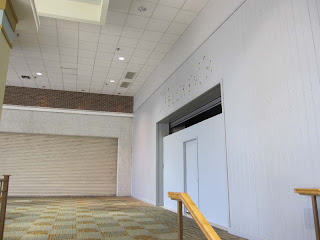 Looking back at the Castner-Knott/Dillard's entrance. The entrance to the right opened to the Juniors section, and the mall is currently leasing that separate from any future department store use. 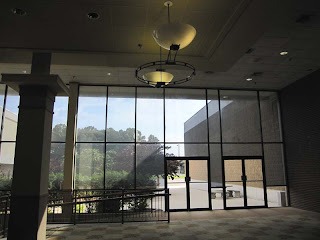 Looking out of the north entrance from Dillard's/Castner-Knott.

The best course of action for the mall owners is to find a department store more suitable for the market. Dillard's is far too upscale for a small town, and the fact it lasted over 10 years in that location is remarkable. Perhaps Castner-Knott was also as upscale, but I'm sure as an outpost store it probably did not carry the higher end lines of the Nashville stores. Dillard's is not as expert about adjusting to their market, but previous owners Mercantile Stores were and today Belk is. Belk would actually be an excellent fit at this location as they gear their stores just for the market. Kohl's and Sears might also do well at this store. The store has the same basic design as most Kohl's, and Sears there would make a perfect discount/department store hybrid since it is one level and large. 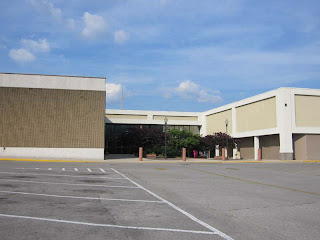 Outside the north entrance, pictured above. 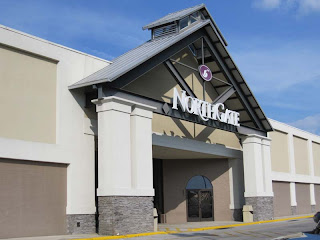 The main mall entrance is quite elaborate, and it definitely proves that the owners actually care about the success of the mall. The former Ponderosa is just inside on the left.

Goody's, on the other hand should NOT be replaced. This is actually an opportunity for the mall's owners to expand the mall by cutting through the empty store and cutting a new mall entrance for JCPenney. By doing this, they would also allow more spaces for small or mid-sized stores, which would make the mall more of a draw. In addition, they would connect another major anchor to the mall, which would draw more traffic into the mall. A large tenant that needed both inside and outside entrances, such as a restaurant, bookstore or drugstore could use part of the space up to the Goody's outside entrance and also have a mall entrance. A Books-A-Million actually would be ideal at this location. A better restaurant is also desperately needed to fill the void left by Ponderosa such as an Applebee's, Ruby Tuesday or a popular regional chain. The mall should study more successful small malls to make this work, because it would not take a large number of stores to fill the voids. 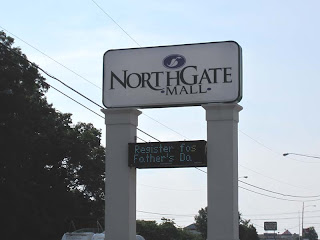 The sign on the highway, however is a bit dull. Note the Western Sizzlin in the background.

The Big Lots, on the other hand, is not an asset for the mall and it makes the mall look more dead. While I'm sure it does good business, it is quite unsightly in the old Kroger space and it hems in the JCPenney so that it has no side entrance unlike the old Dillard's. With that, either JCPenney could expand into the store, renovating the front or the store should be torn down. Big Lots could move nearby in one of likely several vacant stores in other shopping centers. I believe that if they lured in a Belk or Kohl's, cut access for Penney's, attracted a bookstore in part of the old Goody's and made the Penney's stand out more, the mall would be more successful than before. In contrast, if they do nothing and leave two vacant anchors, the center will likely fold within 2-3 years. 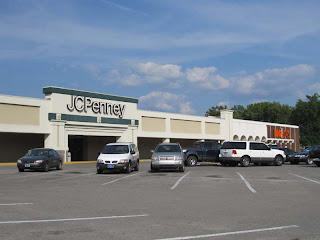 The rest of the mall is truly just a strip mall. The JCPenney here as noted before is not connected to the mall, and Big Lots in a long-closed Kroger just sits on the end like an exception. Kroger really seems to have liked community malls in the 70's. 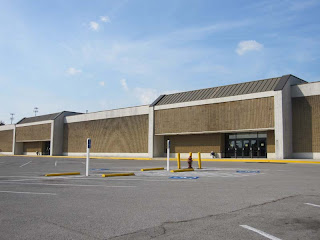 Now for the exterior front entrances of former Dillard's/Castner-Knott. Dillard's wasn't right for the town, but I'm sure a Belk or Sears would do fine here.

Dillard's also had a side entrance, but no rear entrance. JCPenney could use one of these here, too, but it is not possible without modification.

In all, Northgate Mall is no Cool Springs Galleria, but it is a nice little mall. In addition to the suggestions above, I also think this mall should be renamed Tullahoma Mall, Tullahoma Station Mall or Jackson Station Mall in lieu of vague Northgate Mall. The name is confusing since there is also a Northgate Mall in Chattanooga less than 100 miles away. It would be easier to market a mall with a distinct name than one with a name like many other malls nationwide. While it will never compete with big city malls, it caters to a fairly large market covering four cities including Shelbyville, Winchester and Manchester in addition to Tullahoma. In all, I thought this unique mall just needs some love and I hope others can see the potential before it's too late. Of course, even if it dies it has done quite well as a successful mall for over 30 years. 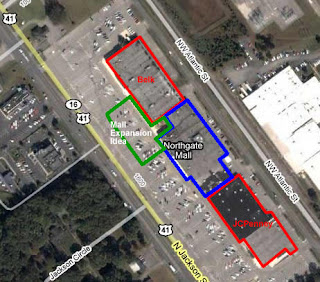 My own redevelopment idea as described above. This drawing also throws in a potential expansion idea.