Treasure Island was a concept ahead of its time. Begun in the late 1960's, this JCPenney owned discount chain was basically the first supercenter concept ever created. Combining a discount and grocery store, this chain featured uniquely designed stores that were found in major cities across the U.S., but were known as "The Treasury" on the west coast. However, they were only successful in two cities: Atlanta and Cincinnati.

Georgia had four locations of Treasure Island stores, all located immediately off of I-285 except the first mentioned here, which was over a mile from Atlanta's perimeter highway. They were also located on major state highways in high traffic areas. These locations were at the intersection of U.S. 41 (Cobb Parkway) and Terrell Mill Road in Marietta, Buford Highway (GA 13) in Doraville, Memorial Drive (GA 10) near Decatur and Jonesboro Road (GA 54) in Forest Park. 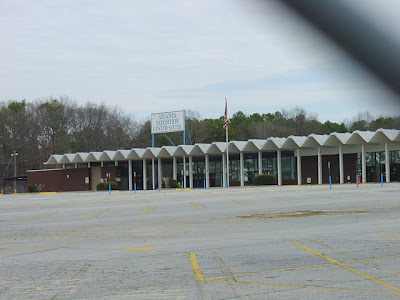 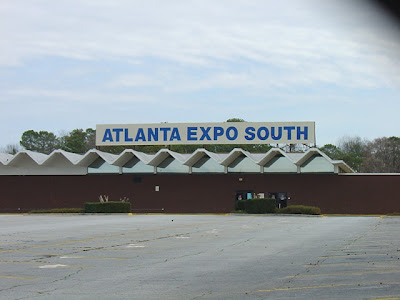 The former location on Jonesboro Road in Forest Park is the most well-preserved location of a Treasure Island. You can also see the original painted over Home Depot sign in the background. The Home Depots were all on the left side of the original floorspace.
Consolidation of the discount store industry became fierce in the 1970's and 1980's following the massive failure of the W.T. Grant chain. This resulted in Treasure Island with its few massive stores having trouble competing with Kmart on steroids and the plethora of other discounters nationwide. Treasure Island was liquidated in 1981, and the vacancy of these stores created an opportunity for a brand new retail chain to emerge in Atlanta...Home Depot. Indeed, Home Depots very first locations were far smaller than today, taking up only a third of the former Treasure Island store space while Zayre initially moved in to take over the rest of the former retailer's floorspace. 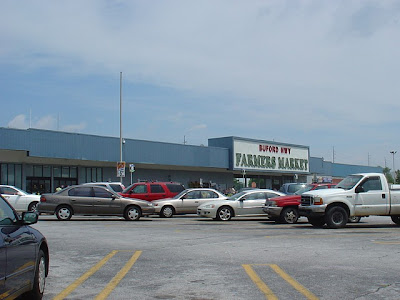 The former location on Buford Highway is now a flea market.
In the late 1980's, Home Depot began building bigger and better stores while Zayre went bankrupt and was bought out by Ames. At that point, the Zayre locations were closed and Home Depot, now becoming a national chain, abandoned the original smaller stores. Given their location, these stores also faced decline of the area surrounding them. The most successful of these is the location in Marietta, which still has a Value City in the former Home Depot portion. The last major retailer in the Buford Highway location was an Office Depot, and now a large flea market covers much of the old floorspace. The other two locations are no longer retail with DeKalb County running offices out of the Memorial Drive location and the Atlanta Expo Center filling out the Jonesboro Road location. The Jonesboro Road location is unique in that it is completely unchanged from when it last functioned as a Zayre/Home Depot while the other locations were renovated and modified significantly.

Today, a concept like Treasure Island would be welcomed by many to reintroduce competition to a market completely dominated by only two discount chains, but its parent company JCPenney has mostly abandoned its other largely unsuccessful retail concepts. Its last, a collection of drug store chains including Eckerd, is now under different ownership while JCPenney focuses on its original department stores.
Posted by J.T. at 5:48 AM 48 comments: 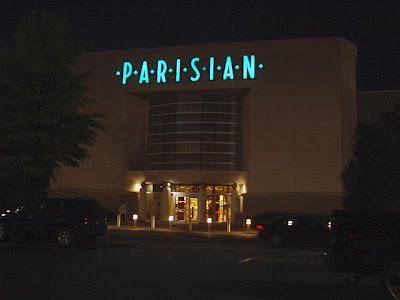 Parisian had a good run in Atlanta, but as most of us have long noticed, never really caught on. It was a store that those in Birmingham loved, but it did not really belong in Atlanta. I remember distinctly when they first arrived in a huge wave, opening in 1993 across Atlanta. Raised on Rich's and Davison's/Macy's, it was interesting but I did not quite see the point except that it brought a more upscale store than Rich's, though Nordstrom eventually stole its thunder with superior stores and staff. 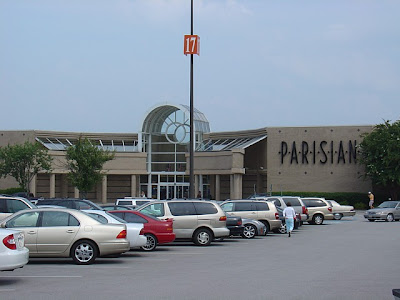 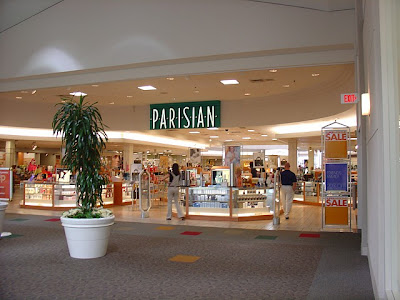 Photos of the now-closed Parisian at Hamilton Place Mall in Chattanooga. This store was an original anchor to the mall when it opened in 1986 and closed due to Belk already owning two stores in the mall. The top photo is of the closing Parisian at Northlake Mall.
While a nice store, most in Atlanta just saw Parisian as overpriced store with underwhelming sales staff. While higher end than Rich's, the store hardly held the niche of Nordstrom or the chic of Neiman Marcus, and Parisian played too much on the overinflated and eventually declining middle class in the early 1990's to establish itself. It was a Birmingham store that CEO Brad Hubbert intended to take national when it was virtually unknown outside of its home state...a risky venture indeed. With that, considering Georgians often condescending attitude towards anything out of Alabama, one wonders how anybody would have thought this would work. 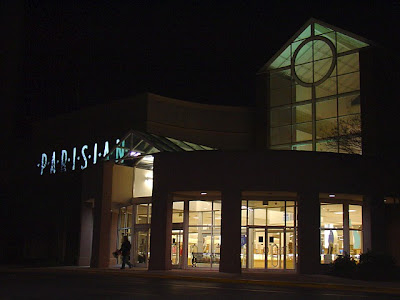 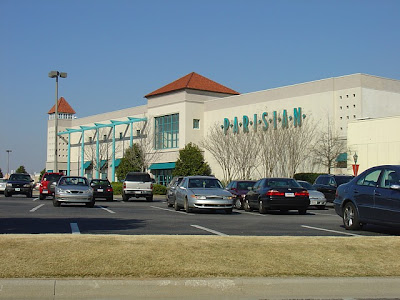 Here are the two most prominent Birmingham locations at Riverchase Galleria, which opened in 1986 and The Summit, which opened in 1998. The former has a very strange stretched, angular design while the latter is one of three anchors of the nation's first "lifestyle center".
Nevertheless, Parisian has enjoyed an almost 15 year run in Atlanta with its initial foray at Town Center at Cobb, Gwinnett Place, Phipps Plaza and Northlake followed by newer locations at North Point (1997), Arbor Place (1998) and Stonecrest (2001). All were new locations except for North Point's, which opened in a former Mervyn's. Northlake's store was among the most bizarre. It was a skinny, elongated store that was squeezed into a spot near the Sears where a McCrory's once was located. 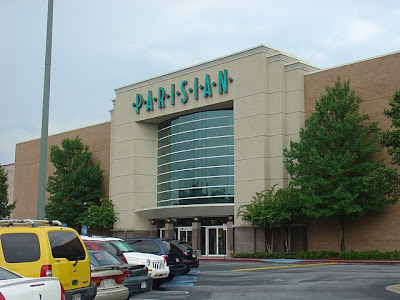 The Parisian at Town Center at Cobb mall in Kennesaw was the same design as all of the initial Parisian stores that opened in Atlanta in 1993.
The sale of Parisian finished off a blitz of department store mergers in the state that began in 2003 when Rich's was merged with Macy's, effectively eliminating most of the Davison's original locations and a couple years later, the Rich's name. The new owners, Belk, had no intentions of keeping a store that was only popular within its original market when the Belk name has been a staple of the South well-known beyond its North Carolina origins. Belk has not been kind to what remains of the chain, now closing three stores in the Atlanta area (North Point, Northlake and Stonecrest) and closing the store at Hamilton Place in Chattanooga in early 2007 where Belk already dominated a large part of the mall thanks to its previous buyout of Proffitt's.

The re-emergence of Belk in Atlanta is an interesting chapter. The locations of Belk in Georgia are second only to their home state of North Carolina. Belk has always been very prominent in the small towns across Georgia, predominantly under local partnerships that resulted in Belk Rhodes in West Georgia, Belk Matthews in central Georgia, Belk Beery in Savannah, Belk Hagins in Americus and possibly others. Atlanta's was known as Belk Gallant, and these stores were all across the area though they never made it to shopping malls. It has been said they were very unpopular at the time, and they completely left the Atlanta market during the 1960's. There really was not room for what was at the time a low-end chain when competing against the national Penney's and Sears, lower-end Kessler's and higher end Rich's and Davison's. 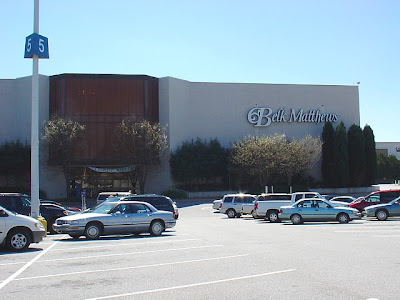 The Belk Matthews located at Macon Mall still retained its original signage in 2005. This store will be closing with Belk relocating into the former Parisian at the same mall
However, Belk was hardly forgetting the market they lost, because their dominance in the South is dramatic and also unique in that they stay exclusively south of the Mason-Dixon line. Belk is also the largest privately owned chain of department stores in the country with the Belk family still in control of the company, now covering most if not all of the South. Compare this to the Rich family which sold off their stores in 1975 with far fewer locations in only three states.

With the market consolidated down, Belk created a test store in the Mall of Georgia when they took over the closed Lord & Taylor location. Seeing that it was a success, when Parisian went up for sale they were more than glad to buy out the Atlanta collection of stores. This allowed Belk to bring A-class stores to Atlanta and to find a place in Atlanta's coveted malls. Already, they were in strip malls all across the area but had not been able to center on the prize. I can't say that outside Birmingham, Parisian will be sorely missed, but more than likely the reintroduction of Belk in Atlanta is welcomed by many: especially those that are very disappointed in the decline and demise of Rich's and Davison's into a subpar bastardized Macy's.
Posted by J.T. at 12:31 AM 35 comments: