Nestled in the foothills of the Blue Ridge Mountains of North Carolina, Hickory is the largest city in that region as well as the only significant outpost between Asheville and Winston-Salem.  While nearby cities such as Lenoir and Statesville have malls, the former is dead and the latter has less to offer than the average strip mall aside from its anchors.  Hickory as a population center is significant with the city holding about 40,000 residents and the region holding over 300,000.  Hickory is also the center of North Carolina's furniture manufacturing industry, and it was the first city in the state to commence furniture manufacturing.  This is part of why Hickory has the region's dominant shopping mall, Valley Hills Mall.  Before Valley Hills Mall, however, this title was held by tiny Catawba Mall. 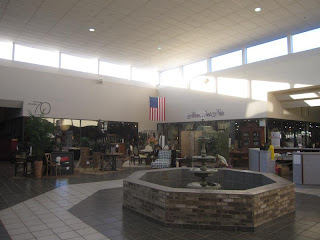 Catawba Mall, today Catawba Furniture Mall, was the first shopping mall in the region as well as one of the oldest in Western North Carolina outside of Charlotte when it opened in 1968.  For its compact size, it was effectively the only enclosed super-regional mall in that part of the state since Charlotte had yet to build a mall like Catawba and the nearest mall like it opened itself in High Point around the same time.  Surprisingly, this mall was also built by Simon: obviously one of their first.  Unfortunately, this potential was offset by the fact that Catawba was a plain, brutalist building that over time proved much too small for the city.

When Catawba Mall opened, it featured a large JCPenney as well as Rose's, Belk Broome and Spainhour's.  Spainhour's was centered in Hickory, so it was a logical anchor since early malls always had at least one local or regional department store.  A Big Star supermarket also anchored the southwest corner of the mall, possibly opening as Colonial, but it did not connect to the interior portion of the mall.  The single-level center featured an L-shaped main hallway with one additional entrance wing connecting through center court.  JCPenney was the largest anchor and the only anchor with two levels.  Rose's extended straight back from center court also containing an outside entrance behind the mall, which is now bricked up.  Center court features a rectangular room with high windows roughly halfway between the former JCPenney and the former Belk Broome.  Spainhour's was situated on the west side behind Belk Broome (and attached). In all, it was a very tiny mall packed with anchors that to all appearances left room for no more than about 15-20 inline tenants aside from the anchors.

When Valley Hills Mall opened in 1978, Catawba Mall did not immediately die as a traditional shopping mall.  While it was clear that Valley Hills was the superior mall, the mall curiously opened with only two anchors including Belk Broome, which duplicated stores at both malls, and Sears, which the older mall did not have.  JCPenney did not initially relocate to the mall, and Spainhour's stayed put.  Regardless, Belk Broome had a small one-level store at Catawba while its Valley Hills Mall store a mere 2 1/2 miles east was a spacious, elegant two-level store with a wider assortment of merchandise.  Only because Valley Hills opened with skimpy anchor offerings was the game not already over for Catawba.  In fact, the two malls completely complimented each other for a decade.  If Catawba's owners had been proactive and enacted an immediate expansion through the back of the mall making it larger and more attractive, perhaps the ultimate outcome would have been very different.

Despite the complimentary nature of the two malls, Catawba proved to be very outmoded by the late 80's.  By then, the mall was already struggling, and this became painfully obvious when in 1988 JCPenney built onto Valley Hills Mall, closing their Catawba Mall store once the new store was completed.  Without a major anchor to pull in traffic, Belk Broome joined JCPenney simultaneously in the exodus finally recognizing that they only needed one store in the market as well.  Rose's also joined the exodus moving west into a new strip mall just west of the US 321 expressway at U.S. 70 and 12th St with Big Star likely anchoring that new strip as well.  With an exodus like that, the mall was in a tail spin.  Nevertheless, Big Lots moved in to replace Rose's and Spainhour's continued to do good business.  Even then, the Spainhour's location no longer appealed to the company.  At the time, they were already in the process of phasing out their department stores.  Spainhour's itself left the mall in 1991 leaving the mall dead.  Big Lots would ultimately leave as well seeking more space than the Rose's had to offer.

The death of one of the state's oldest malls was not lost on the city nor developers.  Several developers came forward with proposals to resurrect the mall, but all fell through.  The city also considered, but rejected the mall site for a civic center.  Of all the proposals, the most unusual one of all came forward in the late 1990's: transforming the mall into a "furniture mall".  A novel concept indeed, a "furniture mall" is essentially different furniture vendors setting up as tenants throughout one center.  The concept was also tried on nearby Lenoir Mall, but failed.  In the case of Catawba Mall, though, it was a total success.  The mall reopened in 1998 as Catawba Furniture Mall, and it is still going strong today.  As a city people travel to just for furniture, it was definitely the best way to reuse as well as rescue a mall that otherwise would have been doomed to a date with dump trucks.

The sad part about Catawba Mall is that its contemporaries have for the most part not been able to survive next to competition, demographic changes and even natural disasters.  Charlottetown failed due to its small size and poor offerings.  Tarrytown in Rocky Mount was ultimately demolished after being destroyed in a long, devastating flood.  If Hickory itself had built any more malls, Catawba would have likely seen a similar fate.  While it is sad to see the old anchors with their iconic signs re-dubbed as something less glamorous, at least it is still possible to see Catawba for what it was for the most part.  As expensive, elaborate and expansive as malls are to build, even the small ones, it is worthwhile to try to save every one even if its use is not retail.  Catawba was fortunate enough to find a second life as a retail center: even if the only "retail" being sold there is furniture.
Posted by J.T. at 11:07 PM 36 comments: