Last year, I covered a mall known as Houston County Galleria.  The Houston Galleria is a struggling mall with otherwise solid anchor tenants that effectively trashed a nearby successful mall overnight while never actually truly succeeding in its own right.  The mall was also built by Zamias Enterprises with a rather lackluster track record of success in their 90's mall portfolio.  The story is similar with Rock Hill Galleria, but the situation is a little different. The anchor lineup, for one, has been a bit more volatile and Rock Hill Galleria, while troubled, is definitely more successful.  As a sister mall to the Houston County mall, however, it is interesting to note the similarities and differences, and it is also important to note the retail scene around it, which is quite different, as well as a better location (conveniently right off I-77). 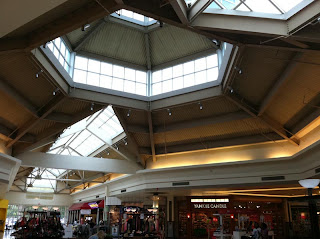 Rock Hill Galleria arrived on the scene in 1991 featuring an eclectic anchor tenant line-up of Belk, JCPenney, Phar-Mor, Sears and Wal-Mart.  Of all the original anchors, only Phar-Mor is not in the mall anymore so on the surface it appears this would be a very successful mall much in the case of my previous example.  The problems are two-fold: management problems and a location that was placed too close to superior competition.  Also built by Zamias, the mall completely killed the city's older mall known as Rock Hill Mall by taking all of its anchors: Belk, Sears and JCPenney.  Labelscar covered this mall through a local contributor.  Unlike in the case in Houston County, GA, though, the older mall did not survive re-purposed like Houston Mall did...it died completely in 1992 and was abandoned in the late 90's.  By 2007, that mall was demolished for a lifestyle center-type development that has also struggled to attract tenants.


One thing I can say for Zamias-built malls: they are neither ugly nor overly cheap looking.  They are very tasteful, but just seemed to falter on management, location and even size.  Note that these are all one-level malls built too close to larger two-level malls.  In the former case, it was now-struggling Macon Mall and in the latter case it is Carolina Place Mall.  Nearly every mall Zamias built was plagued with problems before they were even opened, and apparently construction was also delayed on the previous Zamias mall I covered.  These malls also were very anchor-heavy right as department stores were in consolidation and the mall craze was winding down, so timing worked against them as well.  The fact they killed older, more established malls also did not help their public reputation, similar to what happened with Crown America (Hess's)-owned malls.


While the story of Rock Hill Mall is long passed, the story of Rock Hill Galleria continues on.  In all, it is a reasonably attractive mall, though somewhat less interesting architecturally than its Georgia cousin.  At one level, the mall also has a tough time competing with very popular Carolina Place Mall further north: a two level mall that continues to be one of Charlotte's premier shopping malls only 15 miles away.  The distance is far enough to keep the mall viable but close enough for frustrated shoppers to take the longer drive for better stores.  This might explain why the mall keeps Belk, Sears and JCPenney along with a few popular chain stores while still being riddled with vacancies.


Aside from the three major department stores, the other anchors have been more volatile.  Phar-Mor, for one, failed as a chain in 1992.  It was briefly filled by Brendle's Catalog Showroom in 1995-1996, but otherwise was empty until it was finally filled in 2003 by Steve & Barry's University Sportswear, but this chain itself proved to be a dead mall filler and shoppers apparently concurred as the chain folded in 2008.  Goody's came later, adding onto the mall in 1998 but also closing in 2009 with "Famous Labels" briefly taking the space before tanking as well.  Lastly, Wal-Mart amazingly did not leave the mall, actually upgrading their store at the mall into a Supercenter in 2000.  Nevertheless, Wal-Mart has consistently proven a poor mall anchor and the other anchors clearly did not benefit from the mall nor add anything to it.  Such junior anchors today would need to be filled by stores like Best Buy and Dick's Sporting Goods to actually compliment the mall.


Rock Hill Galleria is the typical example of a 90's mall born with bad karma.  The mall was clearly built with the intent on "upgrading" the shopping experience.  "Upgrading" basically meant that they fully intended to kill that dated, smaller, darker mall on the other side of town, thus destroying viable real-estate that was realistically more right-sized for the market.  However, Rock Hill Mall was facing death anyway: the mall would have had significant trouble competing with Carolina Place, but the double trouble that came from two brand new malls was far more than the 1960's timepiece could endure. Rock Hill Galleria has endured more due to the growth in the area, but it still continues to struggle.  Rock Hill Galleria also saw some change in ownership since it was built.  Zamias finally gave up the mall in 2004, selling it to General Growth Properties.  However, General Growth apparently did not see the mall as enough of an asset to keep, selling it again to Cypress Equities a few months later.  Cypress still owns the mall, but has Jones Lang LaSalle manage the mall.

The future of Rock Hill Galleria is tough to predict.  Without any big name players interested in the mall such as Simon, it will definitely have more trouble attracting big name tenants, but its strength is in its current department store anchors and market, which is still growing even during a recession.  In order for the mall to catch up to its competition in Pineville, the mall will need to broaden and upscale its offerings, which will be hard to do with a one-level mall competing with a two level mall while also considerably further from Uptown Charlotte.


View Larger Map
While I do not put this mall on a death watch at this point, I will definitely say that further growth in the area is needed to make it competitive.  I will also say that the mall needs to find anchors and tenants that make shoppers see the mall as an alternative to Carolina Place.  Basically, the mall should be good enough they will not need to drive out out of their way to shop at the other mall all the time.  The ways I see this is possible is to bring in another department store such as Dillard's or Macy's (most likely in the place of Sears eventually), expand the mall, renovate the mall to make it extra showy and bringing in big box anchors such as the fore-mentioned Dicks's Sporting Goods, Best Buy, Petsmart, Barnes & Noble and Target.  Wal-Mart is also not likely helping the mall and could possibly be encouraged to relocate, freeing the space for anchors like the ones i mentioned.  What the mall may not bring in with higher end merchandise it can make up with diverse, fun store offerings to provide a more all-in-one experience.  This will help to fill in the dark stores within and make it more competitive.  As for right now, Rock Hill Galleria is still a moderately successful mall, but it will have to strive to better market itself if there is ever any hope the public will view it as a true shopping destination.