It can reasonably be said that prior to the 1970's malls were still in their experimental phases.  Up until then, most malls were still locally built and came in all shapes and sizes both enclosed and open-air.  They were tested in all types of markets with all types of formats and layouts often with everything from cutting edge designs to buildings with all the ambiance of a middle school.  Some were smaller than a modern Wal-Mart, but few exceeded 500,000 square feet.  The smallest ones from that era rarely are still standing today: most demolished or converted to other uses as they became outmoded within 15 years of their original construction.  Usually located in smaller towns that were too small to support anything larger, and heavily driven by a local developer bent on creating a new spin on one of the typical strip malls of the era, these malls were just that: a typical 1960's strip mall of the era turned inward.  Nevertheless, these early malls packed quite a few stores into a small space even if selections were limited.  Quenby Mall in Albemarle, NC was one of those. 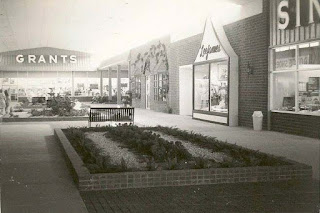 In this small North Carolina city far enough away from major cities, Albemarle is strange in that it once had two operational malls.  While no enclosed mall operates today as a retail center within the entire county, Quenby Mall still lives on repurposed as government offices.  Quenby Mall was the first of those two malls opening in 1966.  While not functional as a shopping mall in over 20 years, the mall today still remains largely unmodified from the day it first opened preserving many of its authentic 1960's elements due to the lack of funding or interest in removing those features from the former mall.  In all, it serves as a hidden time capsule likely saved from demolition due to its size being small enough to be a perfect fit for the needs of county government. 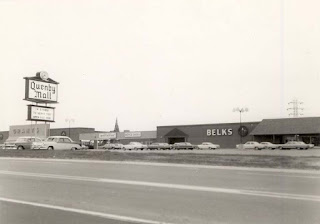 These historical photos of Quenby Mall above were provided to me by the Stanly County Museum.  The first, originally photographed by Rodney Mauldin, shows the interior as it looked in May 1967.  The second photo shows the exterior with the sign, number of stores inside the mall and Belk's prior to the conversion to the big "B" Belk that was used from 1967-2010. 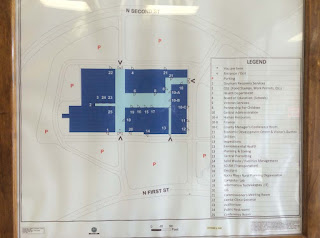 A directory of "Stanly County Commons" showing the many services that operate out of this former mall.  The right side of the mall according to that image has had its hallways reconfigured.  Photo by Mike Kalasnik.

When Quenby Mall opened, it featured a total of four anchor stores: two mainline and two junior anchors.  The largest of those anchors was Grant's, which forms the north endcap of the mall and occupied as much as 1/3 of the mall's total square footage.  Second to this was Belk, which was one of the very few Belk stores anchoring a mall signed originally as "Belk's" before the "Big B" era.  Belk formed a large chunk of the mall's inline space on the southwest west side.  In fact, Quenby Mall is possibly the oldest enclosed mall in North Carolina to have operated a Belk predating stores at Southgate Mall in Elizabeth City and Pennrose Mall in Reidsville.  The third anchor was a Harris Teeter supermarket, which was built on the southeast corner and likely lacked mall access.  The last of those was an Eckerd Drugs, which was behind the mall shops on the east side of the mall between the former Harris Teeter and hallway next to Grant's accessible next to the adjacent mall entrance.  Aside from those four anchors, the mall space itself had a whopping 10 inline tenants.  Indeed, it was by no means a large mall. 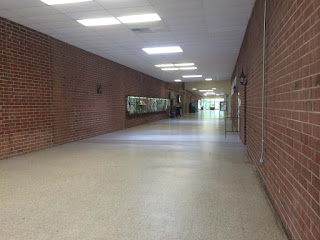 Northwest entrance wing next to the former Grant's/JCPenney.  The former anchor's mall entrance was to the center of the hallway on the left.  Photo by Mike Kalasnik. 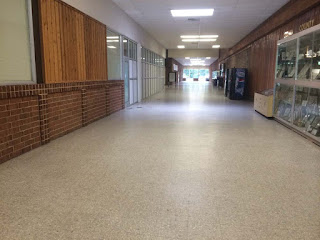 Northeast entrance wing just beyond the Grant's/JCPenney mall entrance.  Doors and walls have clearly been reconfigured on the left.  Near the end of the hallway on the right was where Eckerd Drugs connected to the mall.  Photo by Mike Kalasnik. 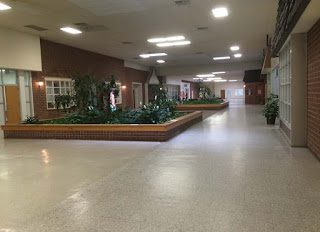 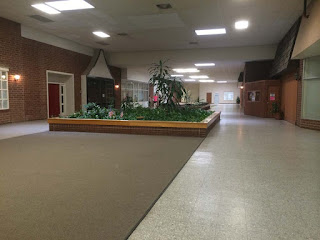 A couple views opposite Grant's/JCPenney looking toward the now removed south entrance wing.  Belk was previously on the right at the end of the hall past the drywall.  A hallway to the left where the drywall is now used to take shoppers to the southeast entrance and Harris Teeter, which likely did not have direct mall access.  Photos by Mike Kalasnik. 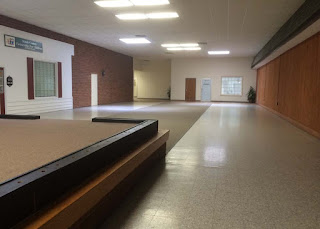 Drywall today covers the south entrance wing, which is now divided up into offices.  Belk used to be further down on the right.  Photo by Mike Kalasnik.

Quenby Mall was joined by several other malls in the region of similar design that were very small with few inline spaces all located in towns too small to support a larger venue.  The malls most similar to Quenby Mall included the two long-demolished malls in Salisbury: Rowan Mall and Towne Mall.  In South Carolina, also-demolished Gaffney Mall and Chester Mall were likewise extremely similar in design suggesting that at least four of the five malls were built by the same developer.  De-malled Henderson Mall north of Raleigh was another possible build by the same developers.  All were simple malls that met an early fate and all had a similar layout of one prominent discount store, one department store (usually Belk), one drug store and one grocery store and only a handful of inline stores.  The size of all of the anchor stores was suitable for the 1960's, but they would have all required significant expansion in the 1970's to remain on-site.  Most likely the land around the malls was not adequate to support the massive expansions required, so the anchor stores all eventually left for other nearby locations. 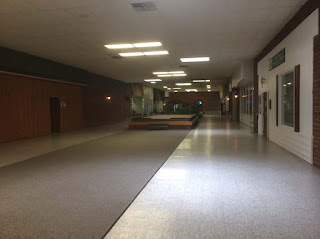 Here is looking back to Grant's with the former Belk on the left.  The white overhang jutting into the mall on the right was where the Singer store was originally.  The wall of the former Belk extends to the overhang in the background.  Photo by Mike Kalasnik. 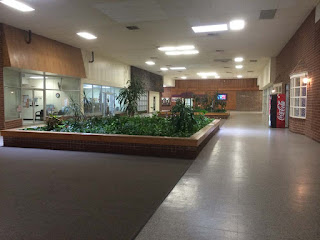 Three shops were located on the left with the hallway ending in front of the old Grant's/JCPenney.  Entrance wings extend to the left and right in front of it.  Photo by Mike Kalasnik. 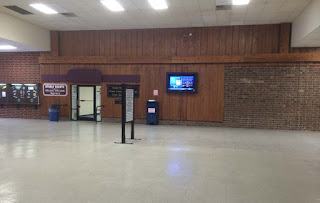 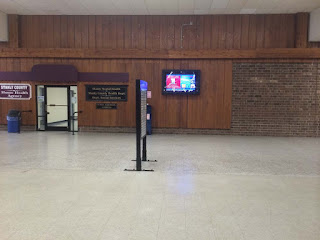 In these images, the JCPenney labelscar is still barely visible.  Clearly JCPenney made significant modifications to the former Grant's including the brick wall added on the right and removal of the metal awning seen in the 1967 photo.  Also note the dropped ceiling and off-center text for "JCPenney".  This shows that the ceiling had not been dropped prior to conversion to Stanly County Commons.  Photos by Mike Kalasnik. 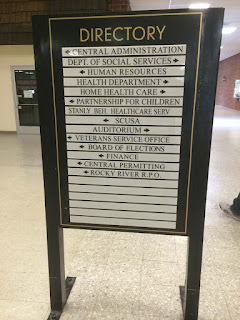 Nothing resembling an old school mall directory here.  Maybe they could direct you to its replacement mall, but it's dead, too.  Photo by Mike Kalasnik.

Quenby Mall began to die quite early due to the fact it was very small, built too close to downtown and was on the wrong side of town when development began to spring up on the NC 24 by-pass.  However, it did enjoy 15 years of dominance in the market.  During those 15 years, Grant's was replaced with JCPenney thus the mall gained a certain level of legitimacy as a regional mall.  However, Belk, JCPenney and Harris Teeter soon realized that they were outgrowing their stores within the mall.  Needing more space, both Belk and JCPenney bolted for slightly larger and much better located Albemarle Mall in 1981.  Albemarle Mall itself was a very tiny mall, but it provided more space for both stores with greater visibility and was attached to a larger strip center.  When both stores departed Quenby Mall, no anchors came into fill the void.  Harris Teeter remained in the mall a few years longer, however, replacing their store with their current store less than a mile away in 1989.  Eckerd looks to have joined Harris Teeter in that move later moving again across the street from Harris Teeter only to be re-branded Rite Aid in 2007. 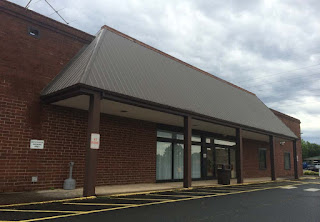 Former Belk exterior entrance.  The entire southwest corner of the mall was taken up by Belk.  Photo by Mike Kalasnik. 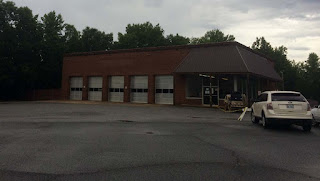 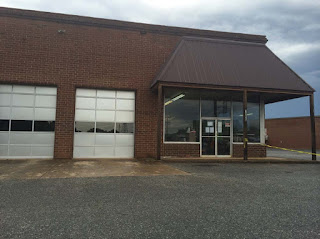 In the 1960's, Belk added auto centers to their malls.  This one was located on an outlot on the northwest corner of the mall.  It was likely closed the same time that Belk relocated to its present location at the now demalled Albemarle Mall in 1981.  Photos by Mike Kalasnik. 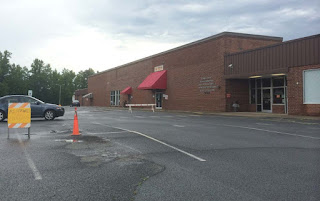 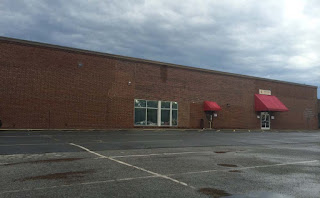 By 1989 Quenby Mall had been left effectively vacant except for a couple small shops inside.  Most likely the mall would have been abandoned and eventually torn down, but ultimately the relatively unremarkable structure was saved.  Soon after the mall closed, the county purchased the mall converting much of the space into various county services including board of education, social services department and health department.  While the county left much of the mall intact, quite a bit was changed.  Corridors were relocated, awnings removed, anchor entrances were bricked up and the ceiling inside the main mall corridor was dropped.  While the main corridor is intact as well as the entrance corridor on the Grant's side, the original hallways in front of what was Harris Teeter and extending to the back of the mall between Harris Teeter and Belk was removed and rerouted through the center of what had been the store sealing off the original exterior entrance on that side.  A drive-thru window exists today on what was clearly a bricked up entrance.  Otherwise, the mall remains unchanged. 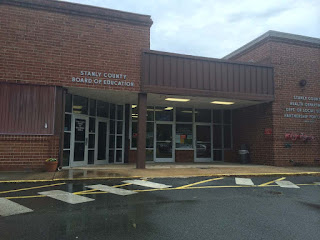 Here is the northeast (back) entrance of the mall.  The county board of education on the right was previously Eckerd Drugs.  Grant's/JCPenney was on the left.  Photo by Mike Kalasnik. 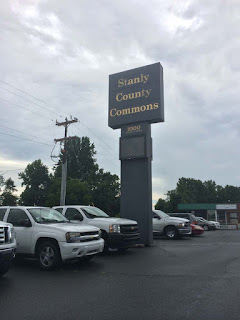 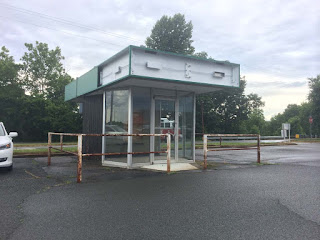 This building on the outlot was either a walk-up ATM or Fotomat.  Photo by Mike Kalasnik. 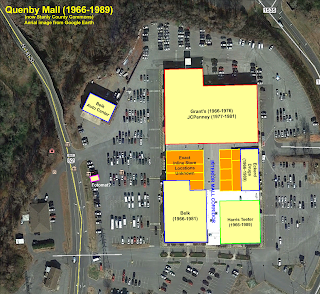 Since the mall had 14 stores, it is not clear where every store was in the inline shops based on available information.  However, anchor information is all confirmed and accurate with exception to the exact dates that JCPenney was in the mall.

No longer functioning for retail uses, what is today "Stanly County Commons" is only open during business hours throughout the week.  Obviously shopping is not going on here, but if you work for Stanly County there is a good chance you work in this building.  Once the principal shopping destination for Albemarle, today there is no reason to go there unless you are a resident of the county in need of county services.  At least in its repurposed form, however, a relic of the early mall era managed to survive.
Posted by J.T. at 12:16 PM 10 comments: