Montgomery seems to be a city that is loaded with retail tragedy.  It seems there is no end to the carcasses of stores past, and the situation looks grimmer all the time as the classic "white flight" scenario will eventually threaten even the last standing actual mall.  While that mall is secure at the moment, Montgomery Mall was not so lucky.  As the second mall in the city and one of the oldest in the state, the center survived for 40 years before succumbing to a very real poverty and crime problem in the past decade that chased all the anchors away to its once friendly rival Eastdale Mall.  The dead mall that exists there today, though, is a far cry from the times when it was the premier shopping mall in the center of a thriving retail district in the city's first suburban corridor. 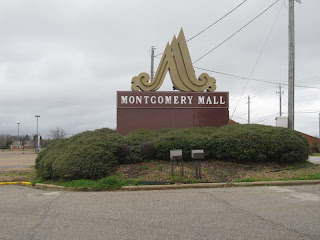 A visit to Montgomery Mall today is surreal.  It is not boarded up, and not even vandalized.  It just simply looks like one day all the shops came in and shut off the lights, locked the doors and never looked back.  While deterioration is setting in, the mall is still in decent shape.  However, the likelihood of it reopening for business is next to zero.  It is a fairly sizable one-level three-anchor mall, too, and passersby would definitely note that it is a mall that is apparently still trapped firmly in the 1980's.  If I had only made it two years prior, I could have seen the mall one last time.  Certainly the invitation to go inside was not open on this trip, but if I had gone in a happenstance open door I happen to wonder if anybody would even have noticed. 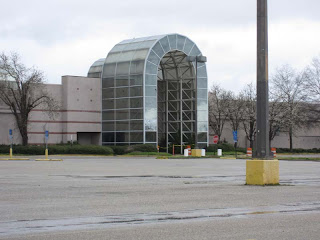 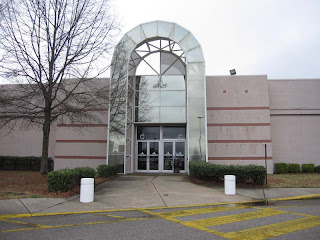 The history of the mall dates to 1967 when a single local department store known as Montgomery Fair opened on the site.  A year later, the rest of the mall would be completed including a JCPenney store and the city's first fully enclosed shopping mall.  Located close to Normandale, the two malls would compliment each other as shoppers could find entirely different offerings at the two malls.  In 1970, the mall would see its first change as Montgomery Fair was purchased and converted to Mobile-based Gayfer's.  Montgomery Mall would then basically hold its own up until 1977 when its first real competition opened with Eastdale Mall.  Nevertheless, the opening of Eastdale had more of an effect on Normandale than Montgomery Mall, so the area would continue to boom all around it with major chain big box stores filling in the gap between the two malls on US 80/82.

This was a rare find here!  Apparently Piccadilly Cafeteria did not do the best job covering up who they bought out, so here is a very easy to read Morrison's Cafeteria labelscar.  Shoney's once owned the chain and sold them off in 1995. 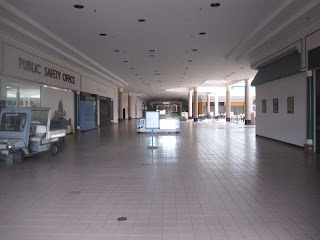 Here is a glimpse into the mall from the side entrance above.  This area of the mall is not yet showing signs of deterioration, but the harsh subtropical climate will take this mall down quickly without upkeep.  I believe this is the southeast entrance in the old part of the mall near Gayfer's/Dillard's.

In the late 1980's, the mall began to see changes, but these changes were actually positive.  This was when the mall received a major renovation that coincided with the addition of a new anchor, Birmingham-based Parisian.  Parisian in a sense was the return of Loveman's for the area, which departed nearby Normandale early in the decade.  The new Parisian store was completed in 1988 and it definitely made the center more upscale.  The new store coincided with a new wing that, instead of extending off to form a T, it overlapped the western half of the mall on the north side extending past JCPenney.  This move was needed by the mall in order to keep it competitive with Eastdale, which featured a stellar line-up of Gayfer's, Sears, Parisian and McRae's despite being a smaller center.  The only problem with this was that the only store that did not overlap with Eastdale was JCPenney, which by then became an issue of whether the city could really support two malls.  The answer in the short term was yes.

Here is the east anchor, which last operated as Steve & Barry's.  It had previously been Dillard's, Gayfer's and, originally, Montgomery Fair.  Gayfer's was there the longest.

Looking at the store entrance into the former Montgomery Fair/Gayfer's/Dillard's.  It looks pretty trapped in 1968 despite the mall itself looking a bit newer.

For the next 20 years, Montgomery Mall served south side customers while Eastdale served the east side.  When Glimcher Realty purchased the mall in 1998, it was a thriving mall with 95 percent occupancy.  One anchor change would also ensue the same year as Gayfer's, along with the rest of Mercantile Stores, was sold off to Dillard's.  Amazingly this overlap of two anchors between the two malls still did not seem to be a problem, but that changed as the vicinity around the mall began to rapidly deteriorate in the coming years combined with poor management from Glimcher Realty.  Glimcher Realty currently gained notoriety for famously running Eastland Mall in Charlotte in the ground.  A friend of mine was even telling me how rough it was around there around 2004 or so alerting me that the mall was in danger of failure.  I would like to have gotten down there at that time, but never could seem to make the trip.  At this point, Dillard's had already left the mall, closing its store in 2003 and some stores had already fled the mall.  Events that killed the mall unfolded quickly. 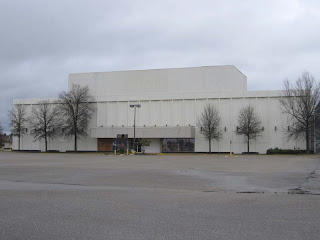 JCPenney looks stodgy and brutalist...and empty.  I bet it was more impressive early on without the drab white paint and the old blue hump "Penney's" logo. 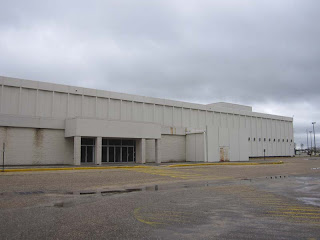 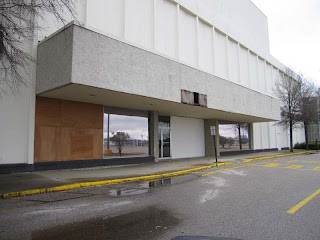 Along the front entrance, deterioration is starting to set in.  The store has been empty for five years.

The next to go was JCPenney.  JCPenney apparently saw the writing on the wall, and they constructed a new store at Eastdale.  When they opened the new store in 2005, they subsequently closed their Montgomery Mall store.  It is a bit curious, too, that JCPenney chose older Eastdale over The Shoppes at Eastchase lifestyle center, which opened in 2002.  It cannot be denied that Eastchase had an effect, because the opening of Dillard's at Eastchase came just before the closing of the Dillard's at Montgomery Mall.  Dillard's did find new life, though, when Steve & Barry's University Sportswear, the flash-in-the-pan cheap sportswear chain, took over the site in 2005.  Parisian proved to be the last department store standing, lasting another year.  Apparently with no planned expansion and a sell-off of the chain in the works, the owners simply closed the store in early 2006.  This left the mall in a tail spin when Parisian closed.  Despite the presence of Steve & Barry's, Parisian's closing roughly coincided with the decline of the surrounding area. 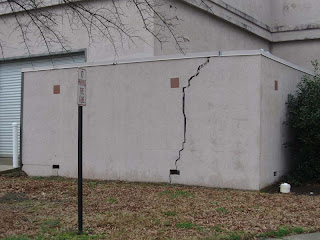 Never settle for less at Montgomery Mall!  Apparently the ground is not so solid under the mall especially since it appears to have been built on a former drainage area. 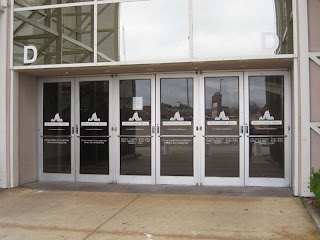 Close-up of one of the mall entrances. 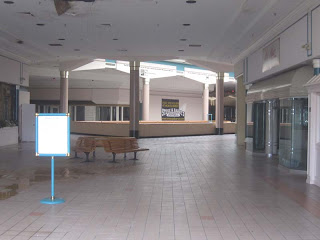 This entrance along the newer Parisian wing is looking worse for wear.  Note the water on the floor and holes in the roof.  In the background is an advertisement for Steve & Barry's in the mall along with sponsorship posted for the local zoo.

In September 2008, Montgomery Mall finally gave up the fight to survive.  A year before, the mall that was purchased by Glimcher for $70 million ten years prior was resold for a meager $4.4 million.  Steve & Barry's was still open at this point, but they were in bankruptcy themselves and would close a short time after.  After Steve & Barry's closed, the mall fell into the state it is today.  With a city apparently over-retailed, discussion of revitalizing the mall as a mall was also apparently never on the table.  The latest proposal is to convert the mall into a new VA clinic, which actually does not seem like a bad idea, though it will do absolutely nothing to revive the area.  However, I would personally prefer any retail efforts to extend to restoring and possibly expanding still-standing classic Normandale Shopping Center in lieu of Montgomery Mall. 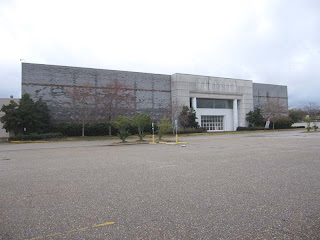 Parisian's stores always had that post-modern swanky look, so seeing one abandoned like this feels odd. 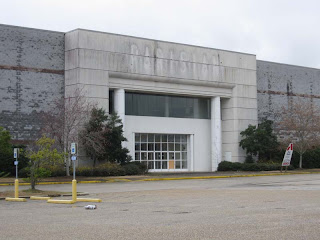 You're nobody special at Parisian anymore.  In fact, don't come back...ever. 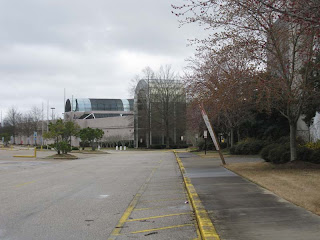 A side view of the mall extending from the old Parisian toward Gayfer's/Dillard's.  This would have been more difficult to have gotten if the mall was operational.

The factors that led to the failure of Montgomery Mall seem not to be so clear, but it does very much seem that changing demographics led to its demise more than anything else despite the fact that new competition was the face of the change.  However, the city is truly over-retailed anyway, and the mall was only sustainable when it only had to compete with Eastdale.  Now with Eastchase sucking what life was left out of the area, it is not surprising this happened.  However, it is a bit odd how it had more of an effect on Montgomery Mall than closer Eastdale.  Judging by the fact, however, that Eastchase only has Dillard's and that the anchors mostly just retreated to Eastdale, I think the decline of the surrounding area is the most plausible.  Retail saturation is another factor, but this seems to also be deliberate.  Lastly, the slow growth rate in the city also provided little to sustain the mall when competition robbed much of its base. 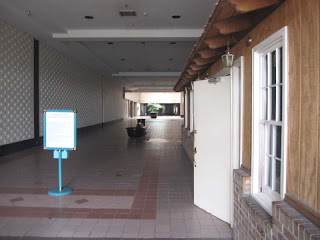 Here is the southwest entrance wing near JCPenney, which I believe is on the left directly in the background.  What did they do to the store on the right?! 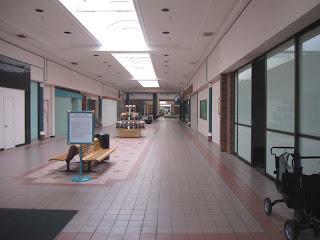 The main entrance wing...dead, but inviting. 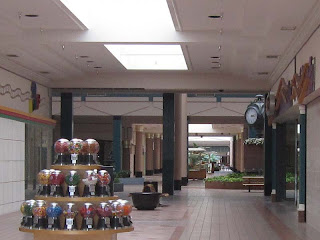 I zoomed in on this shot to give a view of center court the best I could.  I bet that candy is pretty stale by now.  Was the mall foreclosed on?

Regardless of the reasons for Montgomery Mall's closure, what happened to West Blvd should be a signal to city leaders that Montgomery really needs to work on cleaning up the city and its image.  The poverty and crime are worse than many much larger cities I have visited, and apparently neither the will nor means is there to improve this.  In an era when most cities are actually growing inward and the declining areas pushing outward, the condition of the area around it is a failure on the part of the city and the developers in the region to reinvest in the area.  The entire area is full of mid-century apartment complexes and scattered housing projects that do nothing but scare away those with money to shop.  I guess it can be said that the mall at least had a remarkable 40 year run with 30 of those years fully successful. 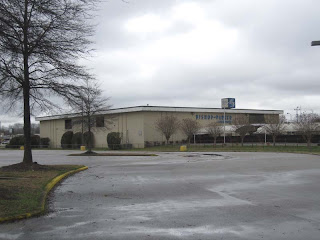 On the outlot was this curious building.  It looks big enough to be a department store in its own right.  What was it originally? 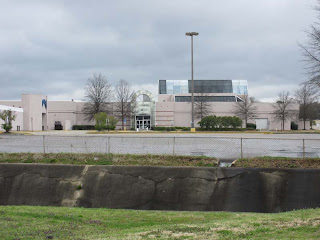 A side view of the mall.  Note the concrete drainage structure.  These were common all over the city, so apparently flooding is common but free flowing streams are not.  I assume this flow used to go where the mall is now. 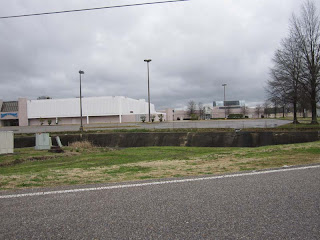 Here is another angle of the mall with Gayfer's/Dillard's on the left.

Does anyone have any shots of this mall when it was still alive?  I noticed a dearth of photos of this mall in any form before it closed in 2008.
Posted by J.T. at 1:19 AM