The retail history of Montgomery seems to be a pretty disposable one.  With many dead strip malls, the city also is one of the few lucky ones to have two dead malls, which I covered prior to this post.  Eastdale is the newest mall in the city, if lifestyle centers do not count.  It has also shifted from an ancillary mall to the prominent destination mall providing the last traditional mall experience in the city since Montgomery Mall faded away two years ago.  Eastdale is quite an experience at that as well.  As Aronov Realty's premier mall, it effectively replaced Aronov's first center in the city as a super-regional shopping destination.  It is also the only mall in Alabama to feature its own ice skating rink, which is quite a unique element considering that ice skating is an unheard of activity in subtropical Southern Alabama. 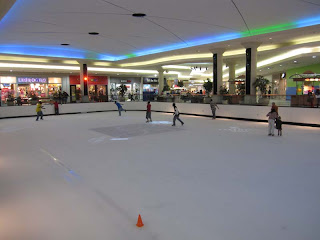 The whole concept of Eastdale Mall to me seems to be roughly modeled on now-closed Eastland Mall in Charlotte.  Apparently Aronov must have visited the mall when it opened deciding to incorporate elements into his own mall.  Even the name suggests a connection, and definitely the ice rink in center court leads me to ponder that assessment.  Eastdale also hosted four anchors originally including stores never before in the city.  The mall itself opened in 1977, and despite renovations it holds much of its late 70's dusky charm with retro elements similar to Aronov's University Mall in Tuscaloosa.  With that, there was a lot to like about this mall, and the crowds in there confirm this. 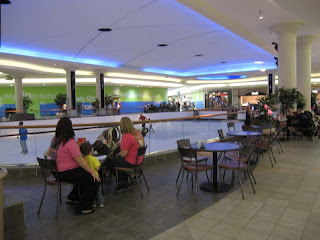 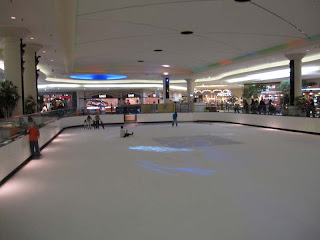 Three pictures of the ice rink in Eastdale.  This is the only mall-based ice skating rink in Alabama. While never as impressive as the rink at Eastland in Charlotte, it is still quite a draw. 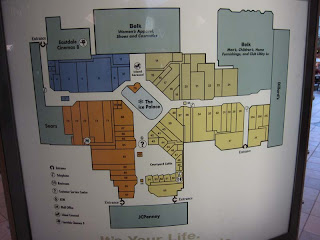 A map of the mall.  The ice rink is just south of one of the Belk stores, which originally was Pizitz and mainly McRae's.  The mall was otherwise pretty straightforward until it was greatly expanded in 2005.

The mall has seen many anchor changes since it opened, but several of the anchors still look original.  Its original anchors were Gayfer's, Pizitz, Parisian and Montgomery Ward.  Pizitz and Parisian were prominent Birmingham stores giving the mall a bigger city feel than its predecessor Montgomery Mall and a first for the city, though Pizitz itself carried over from downtown.  Eastdale Cinemas 8 was also an original anchor, and amazingly it is still there!  The first anchor change came in 1984 when Sears replaced the Montgomery Ward.  In 1987, Pizitz converted to McRae's and Gayfer's was folded into Dillard's in 1998.  The original mall was also last renovated in 2001, and I suspect it was renovated at least one time before during the 1980's most likely after Montgomery Mall updated itself.  Sears at the mall was also extensively renovated inside and out, and it bears no resemblance today to its former Montgomery Ward-styled appearance.  A food court was also added around 1989 along the original front entrance wing (now the JCPenney wing).  The new food court was attractive incorporating planters and fountains along with burgers and fries.  Nevertheless, the original mall was still not much different from the original Montgomery Mall...an older mall forming a straight shot.  Eastdale, though, has a memorable center court to distinguish it and always had more department stores. 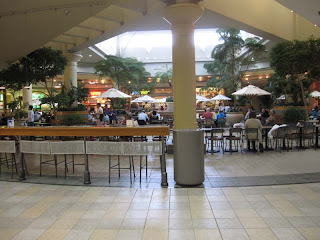 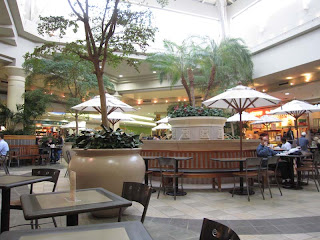 The food court is lush and attractive, though not the most substantial I have seen.  The fountain in the center is nice.  It was added to the mall later. 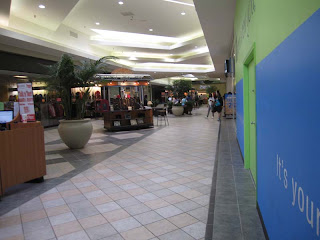 A stroll down the main mall with not the best location for a photo.  This was on the Sears wing.  My camera did not like this darkness and artificial light.

In 2004, big changes began for the mall.  This was when a 30,000 square foot expansion was underway extending from center court to a new JCPenney store.  The JCPenney store would open in 2005 replacing the dated store at fading Montgomery Mall.  The expansion, however, was not just for the shoppers: it was necessary for survival.  The Shoppes at Eastchase, a new lifestyle center, had opened in 2002 and was stealing stores and shoppers from the mall.  The addition, along with the full anchor line-up, was the hopeful plan to keep Eastdale from succumbing to Eastchase.  The improvements definitely seem to work. 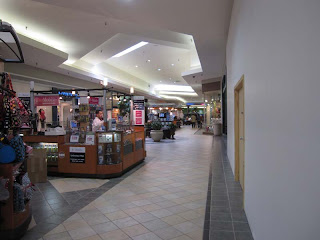 This part of the mall was the Dillard's wing looking toward center court. 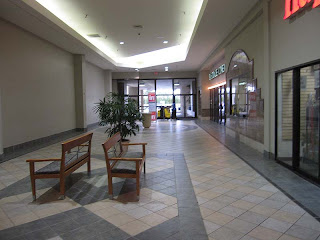 The northwest entrance wing includes a mall movie theater, which in every respect appears to be original. 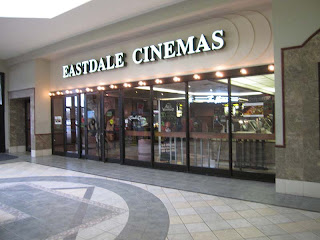 If not for the updated flooring, this could very well be a scene from 1977.  I'm sure the theater is updated inside, though.

Department store consolidation also had a huge effect on Eastdale.  Gayfer's was not the only victim, because Saks, Inc. really shook up the mall starting in 2006.  In 2006, this was when McRae's was sold off to Belk.  Apparently, instead of converting the store to Belk, Parisian doubled up at the mall.  This coincided with the closing of the Parisian at Montgomery Mall, which was a much larger store than the one at Eastdale.  Ultimately, Belk would come back to take over both stores converting both the former McRae's and Parisian over to Belk.  While this maintained five anchors, it reduced the actual department store count to four like it was originally. Belk had no presence in the market prior to 2007, and Parisian was committed to its existing stores, which is the likely reason why neither Parisian nor Belk opened at Eastchase. 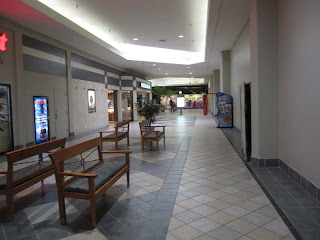 Looking back toward the mall along the northwest entrance wing. 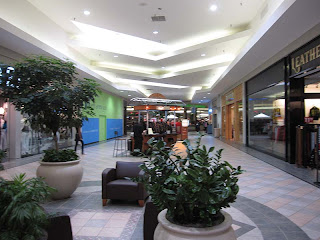 This should have been my best shot of the main mall, but the camera did not want to focus.  I am not meaning to show an empty store in all these photos, seriously! 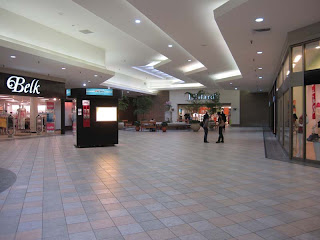 The problem with Eastdale is that it is still part of the same original by-pass road that Normandale and Montgomery Malls faded and died on.  Less than five miles away, the failure of Montgomery Mall attracted to Eastdale the same element that helped to kill Montgomery Mall and Normandale.  That, unfortunately, is not a small problem for the mall as it now must compete with Eastchase, which is in a newer, nicer area with better stores in the area to support it.  Eastdale, in comparison, is at a crossroads.  The real or perceived fear of crime has killed many malls, and this is exacerbated when race or class is a factor, which unfortunately is an underlying major issue in this city.  Eastdale, however, still offers the better and more interesting shopping experience.  This is why it is my belief that had it not been for the 2005 expansion, the mall likely would be in trouble.  Eastdale's strength is in its anchors and excellent management, but if any choose to leave for Eastchase, it may itself be facing a future one day like its predecessor Montgomery Mall.  Since I always prefer the mall to survive over the tacky lifestyle center, I hope that never happens. 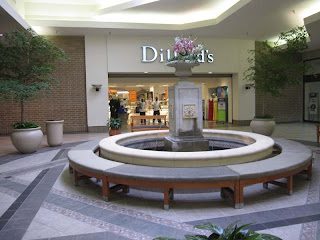 Dillard's here is an original Gayfer's.  This store design is almost a clone to the original Greenville Mall (SC) JB White store inside and out.  Both were Mercantile stores. 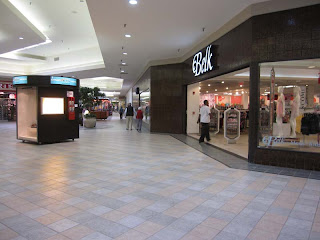 Inside, you can definitely tell Belk started out as Parisian.  Parisian takes up some of the mall space, and it is only one level. 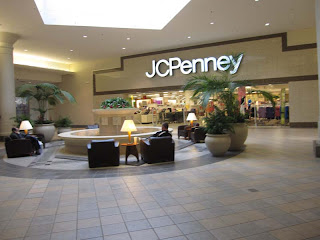 JCPenney is new to the game, so the design is not original, though it shares the theme.  This whole court was not built until 2005. 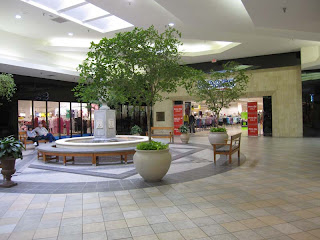 Sears is original to the mall, but the store was renovated extensively inside and out around 2004. 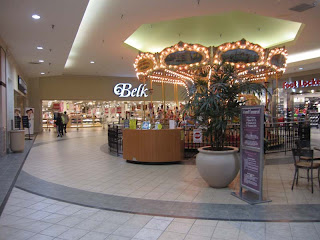 Belk Men, Home and Kids here was formerly McRae's and originally Pizitz.  It was the only Pizitz mall store in Montgomery.  It is just north of the ice rink/center court.

When visiting Eastdale in March 2010, it seemed to be a vibrant mall, but I definitely detected a hostile element from some of the patrons.  Looking at the current lease plan today, I am wondering if what I noticed is starting to have an effect as vacancies have creeped higher in the mall with eleven empty shops counted on the latest leasing plan.  Perhaps it is just the economy, but I also visited Eastchase on that trip where I noticed a full parking lot, upscale stores and an obviously wealthier clientele.  The only thing, in fact, that keeps the two shopping centers complimenting each other is much the same that kept Montgomery and Eastdale doing so before: a more limited anchor overlap.  Eastchase has only Dillard's while Eastdale has Dillard's plus three other department stores stores.  What if Dillard's closed or downgraded that store followed by Belk and JCPenney deciding that Eastchase was the place to be?  I am really surprised that did not already happen and am even more surprised that JCPenney chose Eastdale over Eastchase.  JCPenney's move I am not complaining about, though, as Eastdale is fun and air conditioned while Eastchase is another boring cookie-cutter lifestyle center in the boiling Alabama sun. 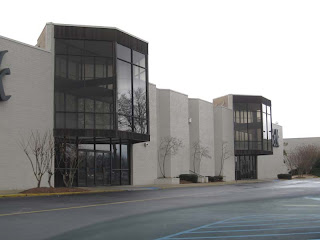 The mall's Parisian, for a brutalist design, is actually very neat looking.  Today it is Belk Women's. 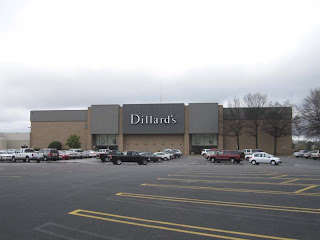 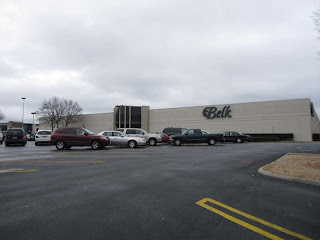 Pizitz kept it simple.  Unfortunately, most of their mall-based stores were rather weird looking and bland.  McRae's was here 1987-2006. 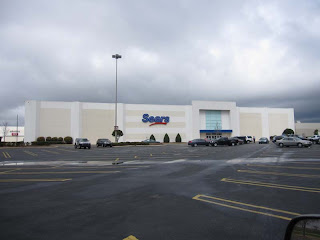 Sears attempted to renovate away any resemblance to the late 70's.  What a shame. 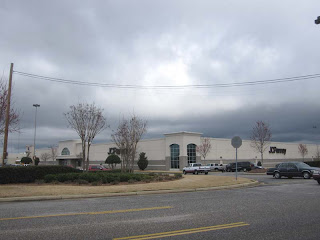 JCPenney took a trip to stucco land for this soon to mildew post-modern mess.

Here in 2010, the economy seems to be barely functioning mainly due to the freeze on lending combined with government instability.  Any major retail projects are likely to be halted or else financed internally, which will only help Eastdale in the long term.  If this same scenario had played out five years earlier, the picture would look very different today.  I am glad of this, though, because this mall was special despite its age.  To me, I also really enjoyed seeing some of the older elements mixed with the new such as the older ceiling treatments (which resembled older Taubman malls), fountains, vintage anchor designs and such combined with the updated appearance.  In an era of sameness and blandness, this is one of those malls I love to cover, because it offers something different.  I hope you will agree and can shed some light on the future of this mall. 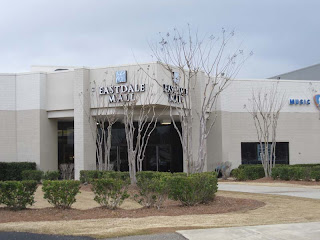 I absolutely LOVE the way that Aronov keeps at least one mall entrance original in their malls.  No, that is not sarcasm. 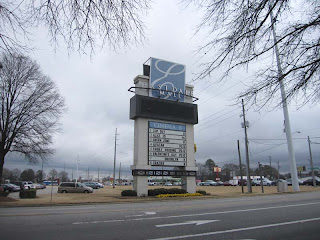 Nothing original here, though.  This sign came with the last renovation.
Posted by J.T. at 2:47 AM