Cotswold City has to be the most unusual shopping center I have ever covered.  While inconsequential today, it has a deep history in Charlotte with a rather unique set of anchors when it opened.  In all, it basically started out as a hybrid of an enclosed mall and strip mall.  Today, it still has a mall portion, though that part is now an open-air mall with new traditionalist design.  The rest remains a regular strip, but it is run down by no means offering quality stores today.  However, it functions more today like a regular semi-upscale strip mall than the destination it once was.  In all, this place is a bit difficult to describe but I have some background along with photos to show how it has changed. 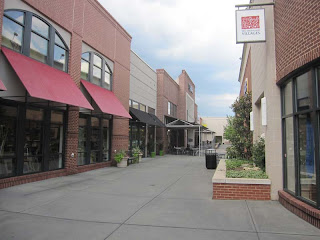 Cotswold opened originally in 1963.  The early center had two department stores, a discount store and two grocery stores.  The department stores were The Collins Company and Ivey's.  Ivey's being there is especially curious, and I am assuming it became an outlet after South Park opened before later closing.  The discount store was the once major player and conventional discounter Rose's that has faded into a murky world of a closeout store masquerading as a discounter.  The grocery stores were A&P and Harris Teeter.  Of that original lineup, only Harris Teeter remains and in the same location as it always was.  A&P departed in the early 90's. 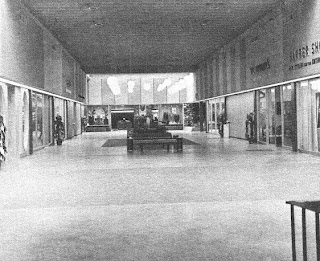 Comparing the Cotswald mall portion today (first photo) and yesterday (above), you can see quite a bunch has changed.  The first photo shows a modern open-air mall with faux new traditionalist themes while the older mall split by The Collins Company shows a rather dark, enclosed mid-60's indoor mall with a few mostly local shops.  Second photo submitted by Pat Richardson from when the mall first opened. 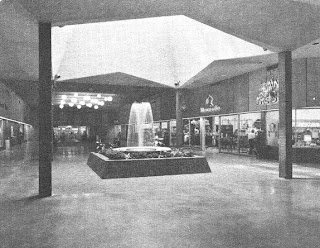 Photo of a court area with a small fountain.  I love the design of that skylight.  I really miss when malls were moody and funky like this...it felt homey somehow.  Photo submitted by Pat Richardson.

This high resolution photo obviously fronts a brochure from when the mall first opened.  From this angle, it looks like an ordinary strip mall, but note the raised parts that appear to be skylights where the mall was.  Most of the early strip malls had a "mall" portion, but this one was more significant in that it was larger and had two major Charlotte department stores as anchors.  Photo submitted by Pat Richardson.

The most curious aspect of Cotswold was the small enclosed mall.  The mall started on the A&P side, curving around toward Ivey's.  In between was The Collins Company, which I have been unable to confirm on how it configured with the mall.  Were the malls separate, did the mall continue through the store or did it continue back behind it?  The mall that was there was ultimately a basic early 60's mall with polished concrete floors that was mostly dark except in the court areas, which included small fountains and funky skylights.  It was a funky mall, and in its later years attracted funky shops. 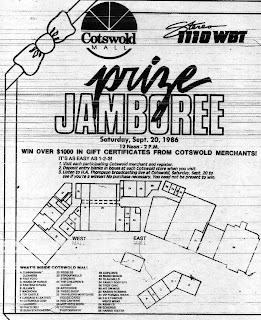 This 1986 circular shows a full map of the mall combined with the rest of the strip.  It appears from here that a mall-thru did exist between what was by then Peeble's.  As you can see, the mall here was very tiny.  Ivey's appears to have already left the center by then in contrast with the information I posted below.  What was the big empty store on the east end of the mall? 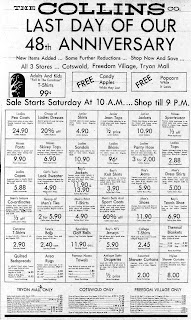 This ad from 1975 is for The Collins Company.  Note that it lists its other two locations at Freedom Mall and Tryon Mall. 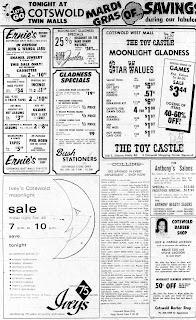 This ad, also from 1975, shows Ivey's at Cotswald.  I can't believe not only that they had a store there but also how it could have stayed profitable after the one at South Park opened.  It seems they would have closed there the very day South Park opened, so that is why I think it must have become an outlet.

The mall began to fade in the 80's, but the strip mall around it continued to thrive.  However, the roster of anchors was destined to turn over with most of those original stores listed restructuring or disappearing.  The Collins Company was the first casualty, bought out by Peeble's in 1984.  Peeble's continued to operate in that location up to 1989.  Ivey's was the next to go as its small format store shut down in 1988.  Stein Mart took over that site the next year.  Rose's also eventually departed, replaced by Marshall's, though the date is unknown.  I am guessing 1995 since that is when Rose's ceased to be a traditional discounter.  By the time the dust settled, only Harris Teeter remained.  However, it has long since been renovated from its original 1963 store so that it is indistinguishable from any other store in the area. 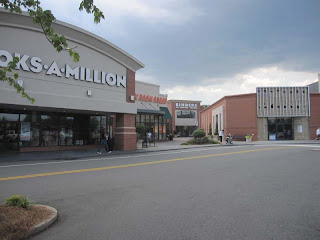 Cotswald really bears almost no resemblance to its original 1966 self.  Books-A-Million on the left is actually part of an old subdivided old A&P.  A&P never had direct mall access.  The opening straight ahead was originally stores in the mall with the original west mall entrance to the left, and the store to the right apparently closed recently and is being reconfigured.  This place was completely full in 2007, but the economy has not left Charlotte unscathed by any means. 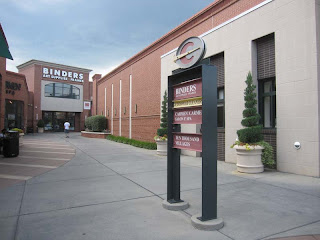 Looking down into the new smaller open-air mall.  Binders is where a back mall entrance was previously and "Phil's Deli" in 1986. 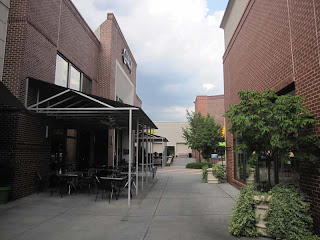 More of the modern outdoor mall along what would have previously been the middle of The Collins Company, which still hosts mostly local businesses.

With the original anchors gone, the enclosed mall portion would limp along offering almost exclusive local shops.  Apparently by this time the owners felt that keeping the mall would pull down the area, so beginning in 1997 work began to tear out the enclosed mall, replacing it with an open-air arcade of shops.  Completed in 2000, it was coupled with a re-tenanting and renovation of the center.  The old A&P was subdivided into Blockbuster Video, Eckerd Drugs and Books-A-Million.  The old Collins/Peeble's looks to have been demolished or at least structurally modified, and it today holds a series of tenants on four sides including Bath & Body Works and...a bunch of local shops.  The only real difference is that now there is no air conditioned comfort or cover from downpours so frequent in the South.  However, it definitely looks more modern or, should I say, post-modern. 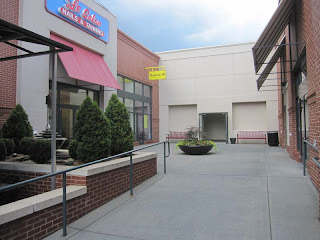 This to me is the strangest thing.  The mall extends out past the second entrance back to the parking lot approximately where the east mall entrance to the main parking lot was to this.  This would have been the mall entrance to Ivey's historically, and today that should connect to what was Stein Mart.  I came up and looked in the open doors and noted a service corridor between that and the old Stein Mart/Ivey's.  Did Stein Mart ever have access here after this was done?  It seems businesses would really struggle right in here. 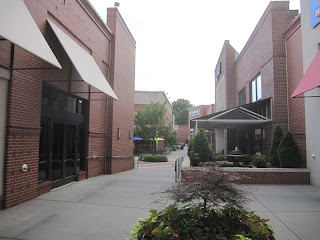 Here, I am looking back west along the length of the mall toward Books-A-Million (A&P).  The weather was actually becoming threatening when I was taking these shots. 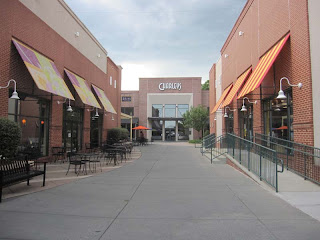 The east mall entrance is actually pretty close to the original.  At the back is a place called Charley's and on the left is a restaurant.  The sky above is frightening now.  It would open up in full fury by the time I arrived at Eastland Mall later.

Today, Cotswold sits in an awkward position as the boundary between nice Charlotte and not-so-nice Charlotte.  However, it has been helped extensively by the upscaling of nearby South Park Mall (yes, I know it's SouthPark, but I like two words better lol).  Cotswold also joins Park Road Shopping Center as strip malls that have become Charlotte legends.  Still nearly as popular today as it was in the past, the redevelopment is very fascinating in its own right.  Instead of just converting to a boring strip, they created an almost unheard of small open-air mall.  Today, the center is having some economic pains, however, as Stein Mart has since departed with Blockbuster headed soon behind it.  Nevertheless, if planned right they can easily fill the voids.  All this as a whole is pretty impressive for a center that will celebrating its 50th anniversary in 2013.  I only wish that most cities would have found a way to preserve their classic strips in the way that Charlotte has with Cotswold. 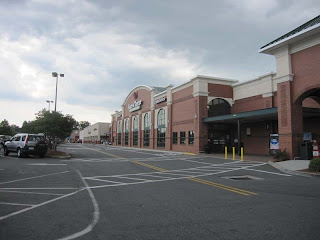 A look at the length of the strip up to the "mall" part with Harris Teeter in the foreground.  Harris Teeter gave their best for this rather elegant looking remodel.  It is the only remaining original tenant.

Many thanks to Bobby Peacock for assisting in the historical information for this post.
Posted by J.T. at 6:00 AM