Most retail relics of significant historical importance receive adoring attention either as they grow and change or as they fade away.  Some, however, do not get the credit they deserve.  This is very much the case in regards to one of the earliest shopping malls in the country in Montgomery, AL that has been largely overlooked in comparison to other early retail developments.  This place is Normandale Shopping Center, also referred to as Normandale Mall.  Normandale is a center that first fell to competition then failed to revive due to the rampant crime and poverty that worsened around the center so that is now an extremely depressed area.  This mall, unfortunately, is synonymous with a city that is difficult to understand: a city with extreme poverty and an extreme racial divide that has left large parts of the city a wasteland with little interest in fixing them.  Normandale Shopping Center is no exception, and it is a symbol of the decrepit neighborhood around it which is probably the only reason it is still standing today. 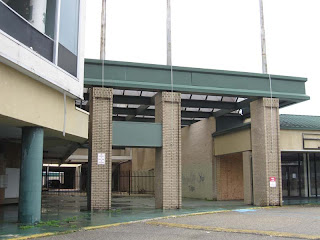 Normandale Shopping Center was once a great place to shop.  It opened in 1954, then constructed by Aaron Aronov, who built several major shopping malls mainly in Alabama spawning from the success of this shopping center.  Originally the center was a strip mall, then anchored by Winn-Dixie.  The Winn-Dixie was highly unusual in how it bows outward.  In 1956, the strip mall was appended with a small open-air mall.  The result was a very unusual type center that became a hybrid of a traditional strip mall and open-air mall off the middle.  Included in this expansion was a large two-level Loveman's department store, an A&P, Woolworth's and Parker-Sledge Hardware.  It is my understanding that Parker-Sledge Hardware formed the junior anchor at the opposite end of the mall, but I could be wrong.  Other tenants in the mall, according to information gathered on Mall Hall of Fame, were Brenner's Shoe Factory, People's Bank, Gulp Piano and Organ, Hancock Fabrics, Cohen's Records, Francis Cafeteria, Twix 'N Teens, DeShield's and Buster Brown Shoes coming to a total of 43 total stores. 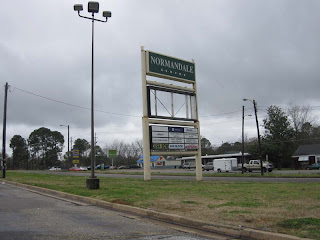 The first photo shows the main mall entrance extending from the original strip mall parking lot.  The second photo is of the current sign along Norman Bridge Road.

The 60's and 70's were prosperous times for the mall despite the coming of a new rival in Montgomery Mall in 1968.  The two malls would compliment each other forming a thriving retail strip to the south along West Blvd (US 80/82), which was the then-new by-pass around the southeast side of the city.   Normandale, however, was in a bit of an offbeat location situated a block outside of view of West Blvd on Norman Bridge Road.  This location suggested the center predated the new by-pass for some time.  Everything seemed to be fine at the retail landmark up until the late 1970's when two events led to the demise of the center.  The first was the opening of Eastdale Mall further east in 1977.  This was soon followed in 1980 or 1981 when Loveman's went out of business.  This was only the beginning of hard times ahead for the mall. 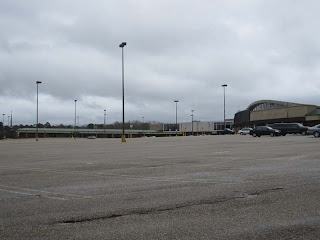 Here is an overview of the original part of the shopping center with the old grocery store, which I am assuming was always Winn-Dixie on the right and Loveman's in the middle. 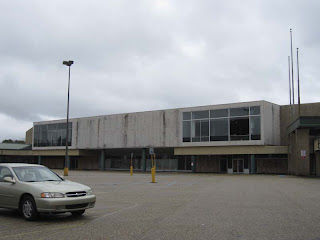 Here is a close-up of Loveman's, which did find life after it closed, but has been decrepit and abandoned for years since.

It wasn't just competition that hurt the mall, however.  The area around the mall was beginning to work against it, and in a very harsh way.  The main problem was that very old apartment housing was built in abundance all around Montgomery, but especially near Normandale.  In fact, some of these apartments, which appear to possibly be an old public housing project, are located across the street facing the mall.  If nothing else would deter someone from shopping at the mall, those certain would.  Throughout the next couple decades, most stores would leave the open-air mall, though the strip mall portion would continue to function.  No-name local retailers took over the old Loveman's and Parker-Sledge Hardware, though Winn-Dixie found continued life for many years in the original grocery store.  It gets worse. 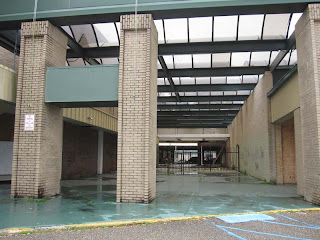 A look into the mall itself.  I wish I had gone up to that fence, but I felt very nervous here.  This was partly due to the fact I just had been panhandled at McDonald's nearby just earlier.  I will go back and get a closer look at this eventually. 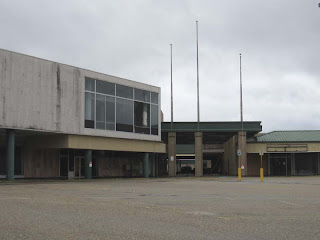 Another side view of the entrance with three poles in the front.  I always loved these poles like this.  Early open-air malls always seemed to have them.

Retail competition and neighborhood decline had already taken hits at the mall, but nature itself would take its own swing at the complex.  In 1995, a tornado made a direct hit on the open-air mall portion of the center.  While the damage was not extensive enough to completely destroy the structures, the already dead mall was damaged to the extent that the mall portion was closed off in lieu of being repaired.  Apparently, the owners were uninterested in repairing the mall portion, and any money used at all was applied to improvements to the older strip mall.  Obviously as a result of the tornado, I noticed an old truck situated right on one of the sidewalks in the mall part.  The mall part has been abandoned ever since with a high pointed fence keeping pedestrians away from most of the mall itself. 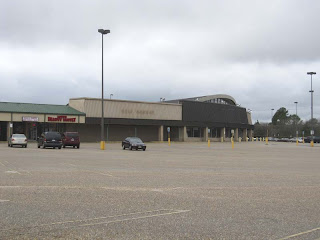 Here is a closer view of the grocery store with "Deli Bakery" in obvious Winn-Dixie font on the side.

The mall today is isolated in a cesspool of poverty and abandoned structures.  The parking lot of the mall is cracked and grown up with access blocked except along the strip mall portion.  Even worse, most of West Blvd in the area is also run down and decrepit with most retail gone.  Calhoun Foods occupied the old Winn-Dixie, though it appears that it to has closed.  Even Montgomery Mall closed down a few years ago and sits there abandoned just down the street.  Figuratively, the only bright spot in this area is the Montgomery Flea Market very close by.  It would take an enormous undertaking of gentrification to revive the area, but instead the middle and upper class in the city has shifted east outside of the city entirely.  Reviving the center for retail would be extremely difficult, and its visibility issues make it near impossible.  If the area was in better shape, it would either be torn down or converted to some other use, which makes me thankful in a roundabout way that the neighborhood is this bad.  Millions in damage left unrepaired from neglect and the tornado is bound to make the property even more worthless.  To me, though, it just seems to me like a diamond in the rough. 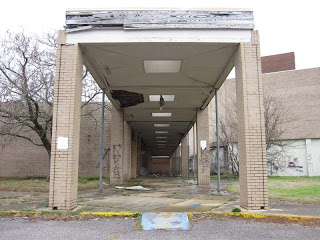 This is a side entrance on the opposite side of Loveman's.  I absolute love this covered walkway done like this.  It is deteriorated, but not beyond repair. 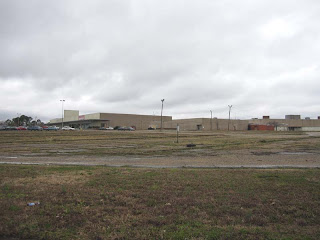 This view is from the opposite end of the mall.  It is a little less inviting.  Note the parking lot is starting to get grown up from years of disuse.  I did not travel it for fear of damaging my tires. 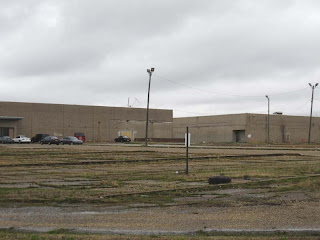 Here is a close-up of the backside of the mall.  What was the store on the left?

Amazingly, a plan still came forward to redevelop the long dead mall.  In 2005, a plan surfaced by Joseph G. Arnone, a mall developer from Kansas City, to revive the mostly vacant center.  The builder tried more than once, but failed due to being unable to secure financing for the project.  If that was true, it makes me wonder if redlining does indeed still exist considering that the builder's plan included condos and a revitalization of the entire center to a bit of its former glory.  Perhaps this could happen, but this would have to be a coordinated effort by the city and other developers to fix the rest of the area.  I am betting this is unlikely to happen now with the poor economy. 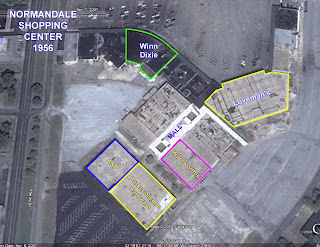 Here is a map I made.  The only information I know for sure is the location of Loveman's and Winn-Dixie.  I do not know if Winn-Dixie was something else, and I am speculating on the locations elsewhere in the mall. 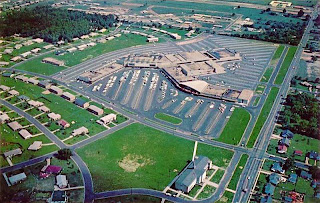 This postcard aerial photo from the late 1950's shows better times for the mall.

50's malls, unfortunately, did not typically last the test of time.  Located in the earliest suburbs with small houses, drab strip malls and an early modernist design that is considered unsightly today, it was typically special circumstances that kept malls of this era afloat.  In the case of Lenox in Atlanta, the mall was situated in an extremely affluent area that did not change from that at any point.  The area around Normandale, however, was a comparatively blue collar area that simply aged to the point that the lower class took over.  In reality, it is not amazing that the mall died.  It is amazing, though, that is still around with the opportunity to be revived as well as being viewed by urban explorers and modern history buffs such as myself.  If the neighborhood can be turned around, perhaps this classic beauty could come back with it.  It would be miraculous to see a vintage 50's open-air mall restored to its original 1950's appearance regain its position as a retail landmark.  For now, it seems like a pipe dream but anything is possible.

If anyone would like to submit any additional photos of this fascinating place, please feel free to send them my way.  I would love to expand my coverage of this mall.
Posted by J.T. at 6:00 AM