Gastonia has a population of over 70,000 residents, which is a sizable city for North Carolina.  It is also a city in its own right despite its close proximity to nearby Charlotte.  Still, Charlotte's growth has today made it part of the metro area.  When Eastridge Mall came along, it brought first class shopping to Gastonia, but the mall itself was not the first in the city.  The first was Gaston Mall, which was a much smaller Woolco-anchored center built in the late 60's.  Eastridge arrived in 1976, far eclipsing Gaston Mall and drawing a large trade area that served a market in both North and South Carolina mostly independent of Charlotte.  It is also a relatively large mall with nearly a million square feet, five anchors and three levels that was undoubtedly as popular as Eastland Mall was in Charlotte in its early years. 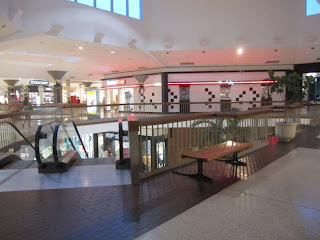 When the mall opened, it brought in three large anchors: Matthews Belk, Ivey's, and JCPenney.  The anchors were shuffled over the years, however, with only Matthews Belk retaining its original location.  However, little changed with the mall for nearly 20 years: it's 70's trappings and anchors remained in place with the exception of Ivey's, which became Dillard's in 1990.  Goody's also joined the mall somewhere in that time span, though it is unknown whether it existed as anything previously.  However, all of this suddenly changed rapidly beginning in 1996. 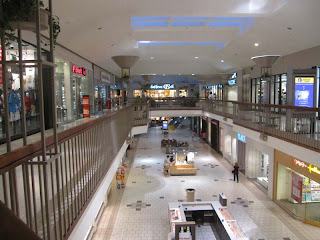 The first photo is a view of the upper level court outside of Dillard's looking toward the food court.  Notice the old-style floor tiles interspersed with the terrazzo.  The second photo is looking from the second level toward Matthews Belk.

In 1997, JCPenney completed construction of a new store in the front of the mall facing NC 279.  The old store located on the southeast end was then demolished and replaced the following year with a new Dillard's.  The whole shuffle was curious, so I'm assuming Dillard's and JCPenney cut a deal to give both stores greater exposure and more ideal anchor pads.  When work was completed, the old Ivey's/Dillard's was then converted to Sears.  This brought the total anchors up to four not counting Goody's, which opened as a junior anchor adjacent to Sears.  During the same time, renovation was begun on the mall, which was completed in late 1998.  The unfortunate part of the renovation was that food court, which was located on the third level, was moved down to the main part of the mall on the second level.  The food court replaced what had been a four-screen theater.  Not only was a theater lost, but this also resulted in the closure of the third level, which itself was only accessible from the JCPenney wing (originally the front entrance). 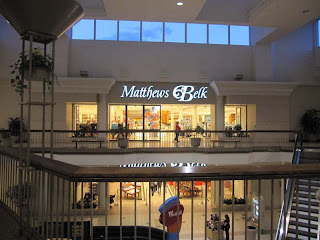 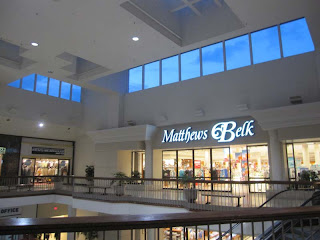 Matthews Belk mall entrance has apparently been modernized, but not the skylights above it. 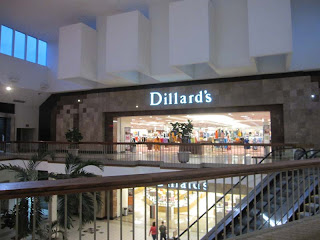 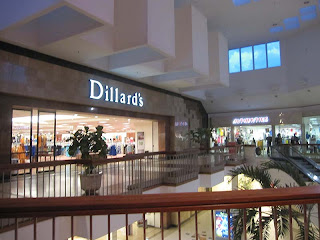 Dillard's mall entrance was previously JCPenney.  The outlandish boxes on top are a real trip.  Did those ever serve any purpose?

The renovation was also really a stripping down.  All fountains, planters and sunken seating areas were removed on the lower level to create a flat surface with modern floor tiling.  The upper floor looks to have part or all of the original flooring with terrazzo flooring interspersed with brick linoleum tiles.  In all, it looks like the mall was visible neutered in 1998 making it look much smaller than I'm sure it looked originally.  Any other "improvements" looked primarily to be white paint covering any possible color that existed throughout.  Basically, the mall needs a new renovation with some of the 70's brought back! 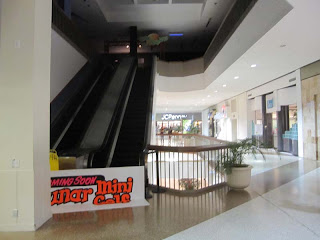 Dark escalators, which provide access to a smaller third level.  Originally a food court (and offices?) this most recently held a small theme park that is now going to host mini golf.  JCPenney's mall entrance is in the background on what used to be a main entrance. 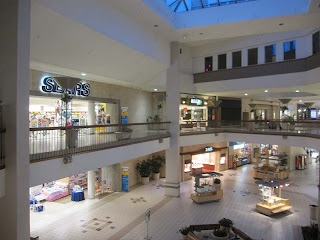 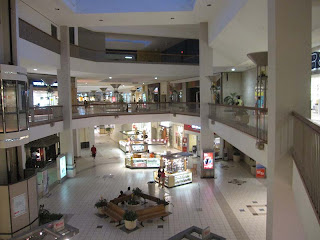 This is now looking toward Matthews Belk.  The open third level is creepy looking but very cool.  I'm amazed it is still there...it must have been too expensive and complicated to remove it.

The third floor has proved to be a quandary for the owners of the mall.  It has spent much of its existence abandoned since the food court was kicked out.  A small indoor theme park called Jeepers! took up the space in 2005, but closed in 2006.  Jeepers! was essentially an arcade with a few rides, stuff for the kids and even a small roller coaster.  The third proved a challenge due to ceiling height restrictions. The latest venture about to open in the dark third level is a mini golf course...pretty much anything is being tried to keep the third level from looking creepy and dead.  I was surprised to find the mall had a third level but disappointed to see that it had not been properly worked into the mall.  The owners could possibly find a way to connect it somehow to Sears and JCPenney so that it can become part of the mall space.  A return of the food court would be the best plan...the current food court is ugly and boring in an era when splashy food courts are very much in vogue.  I think if they combined a refurbished food court with a new theater on the third level, it could be a huge draw! 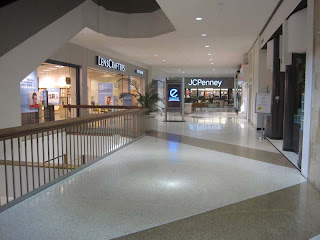 Approaching JCPenney with the third floor escalators on the left. 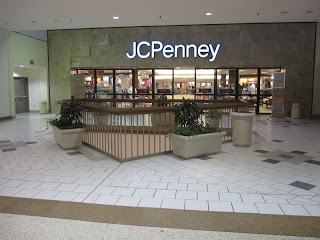 JCPenney's mall entrance looks kinda dowdy.  I wonder if anything here where the floor changes is original.  The railing looks straight up 70's.

Another thing I noticed about the mall was how dark it was.  While I love dark malls, and that was popular in the 70's, these dark malls typically came with the tree-filled elegance and gushing fountains.  Now, it just looks cavernous with such limited light and focal points.  Skylights in the mall are small, and artificial light was sparse.  The mall was so dark when I was there it was difficult to see even without the camera.  I wished so much that I could have seen this mall how I was sure it once looked, but opportunities like that come extremely rare today as mall owners in the 90's discounted the value of beautiful malls in favor of packing them with tacky kiosks and problem-free flush floors.  Is it even possible to restore this once its gone if they actually wanted to? 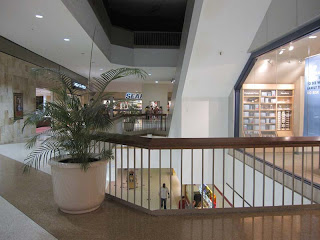 This image was captured along the same JCPenney wing heading back to center court. 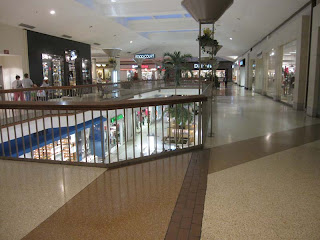 A look along the Dillard's wing from the upper level.  Note the strip of old linoleum tiles.

Eastridge Mall has also changed ownership twice since it opened.  The original owners, Carlson Properties, sold the mall in 1989 to Jacobs, Visconsi & Jacobs Company.  The last sale came in 2002 to Westfield America Trust, who changed the name to Westfield Shoppingtown Eastridge.  This is the only Westfield mall currently in North Carolina.  About the only thing to change since they took over was the sign on the road and the replacement of Goody's with a Shoe Dept. Encore. 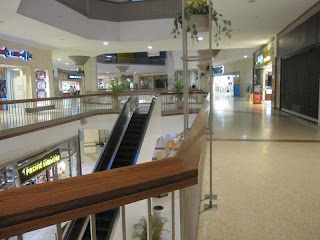 Escalators in the mall are only found in the middle of the wings and in front of the anchors.  Apparently, this was done to prevent the need for them in center court when much was there.  A similar set-up remained at Cumberland Mall in Atlanta prior to the 2005 renovation when they were relocated to center court.  I personally like them the way they are here. 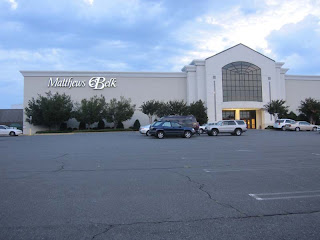 Matthews Belk here looks new, but it is not.  The entrance was redesigned over 10 years ago replacing a very gaudy one. 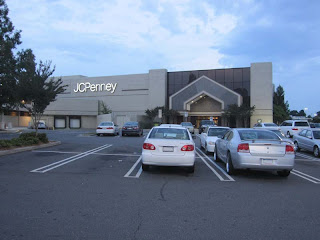 The JCPenney is a very goofy design.  It was built in 1997, but it pays ode to typical 70's department store design with the dark glass backdrop.

Eastridge Mall is a truly awesome mall that needs to be treated as such.  It is sad that in the 90's they could not have been more imaginative with it when many mall developers in other places were putting out their best for the last time.  It is not a dying mall by any means.  The area is a upper middle class suburb that is more than enough to support it, and competition currently is non-existant.  Still, I wish they would renovate again.  This time, they need to bring in some really spectactular in-floor fountains in the court areas, trees, plants and reinvent the third floor as a new theater/food court area.  Another thing they need to consider is to bring in more natural light: put in some new skylights with a multi-angled roof design featuring wood paneling underneath to keep it classy.  Put some color on the white walls as well. 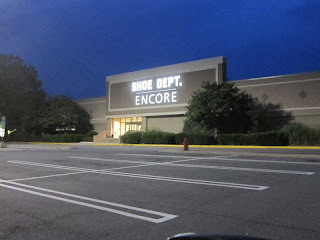 Shoe Dept. Encore has an outside entrance since it previously operated as junior anchor Goody's. 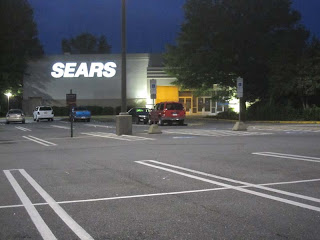 Not a great shot, but Sears here originally opened as Ivey's.  Dillard's operated in this spot before moving to its current location.  I did not photograph the newer Dillard's since it was a total clone to every other Dillard's from the era.  If Dillard's wants improved business, they need to follow the older model and make every store distinct and unique.

On top of a swankier mall, I think a more distinct name might be good for the mall in addition to interior improvements.  A name I would like is Kingsridge Mall to reference its location near Kings Mountain: the highest peak in the Charlotte area.  Being west of Charlotte, the "east" part is a little strange.  Not to be too critical, the mall is a nice mall and is solid with the best mid-market anchors in the region.  While I would never want the physical structure itself to change, I do think that as Charlotte grows to it that the mall needs to stand out more.  Before I visited, I did not expect the mall to be so unique so I hope that in the future they will better capitalize on that.
Posted by J.T. at 1:47 AM