Doing a series on Eastland Mall is a little strange for me.  The reason for this is because the photos I took were the very first time I had ever seen the mall.  I never remembered its prime or when it was new, but with my blog focusing on retail history in the Southeast, it would have been sinful for me to have ignored this.  It was funny how if this had happened 20 years ago it would not have gotten so much attention.  Quite a few "firsts" have departed with fewer tears shed.  Charlottetown Mall, which had faded and changed names twice finally fell into the dustbin of history four years before...likely with far less fanfare despite the fact it was the oldest enclosed mall in the Southeast.  Charlottetown, however, never became a superstar like Eastland.  It was pretty much sidelined for better malls within 11 years of opening. 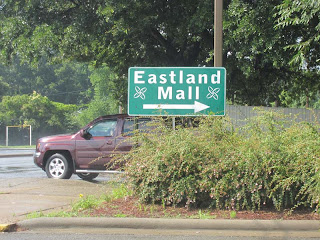 With Eastland, I felt the need to present memories of a faded retail palace much in the way I have many other lost malls.  I am actually impressed and quite pleased at the amount of attention this place is getting as its era has come to an end.  When the giants fall, it always comes as a shock to people even if they saw it coming for years.  I only wish that so many of the other historic centers had garnered this much interest as its future prepares to be very different from the past 35 years.  To me, upon visiting the place it was difficult to grasp that despite the condition it was in that it was truly the end.  I felt much the same way as I saw other malls of my youth fade, vanish or morph into something unfamiliar.  Unfortunately in the volatile world of retail, change is far more drastic than any other. 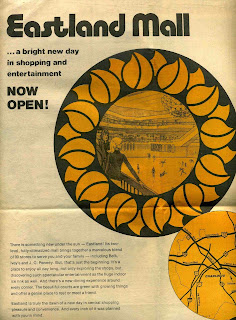 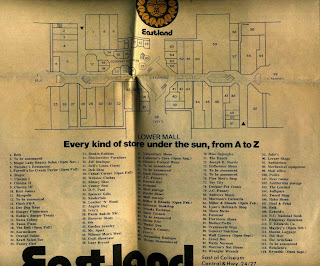 Directory of Eastland Mall from 1975.  Scans from Pat Richardson.  The first photo is a road sign pointing to the mall with the mall's logo on it. 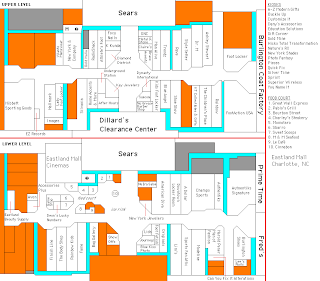 A custom map from 2007 made by Bobby Peacock.  I had forgotten about Freds and Prime Time in the last post. 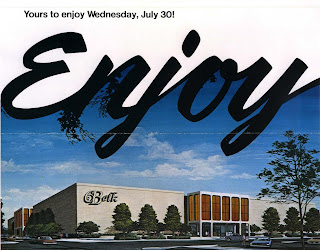 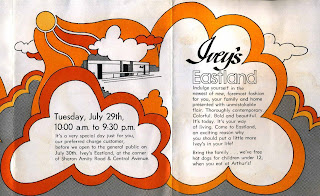 I guess that many of us do not realize the effect malls have on us.  It sounds corny, I know, but as I've said before malls were the downtowns of two generations.  So many of us spent our childhood and teenage years in them, and I remember when they were as a whole far more exciting than today.  The dead mall phenomenon is not just the area, the economy or a change in fashion: they just are not what they used to be.  They started out as an "all in one" shopping experience when today you do well to find anything besides marked-up clothing and bad Chinese food.   Eastland is also an example of the shift of interest from the mall "experience" that Eastland presented.  The fountains and trees are gone.  No Eckerd drug store with a soda fountain is to be found.  The ice skating rink became a costly liability.  Kiosks replaced nice seating areas to help pay the air conditioner bill before they, too, left. 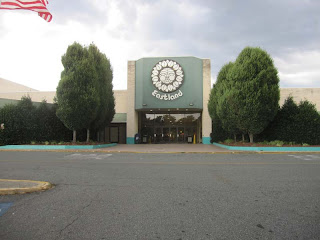 What is preposterous to me is how the original mall entrances have remained in place from day one, but even more so how they really do not look dated at all. 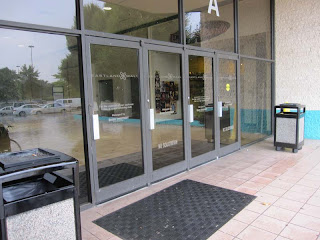 More detail of "Entrance A". 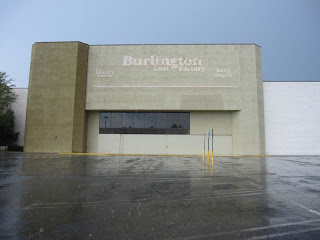 Burlington Coat Factory labelscar on the hideous old JCPenney.  Ivey's and Belk were attractive and distinct, but I cannot say the same for JCPenney. 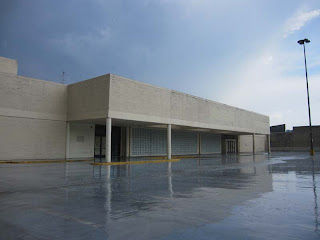 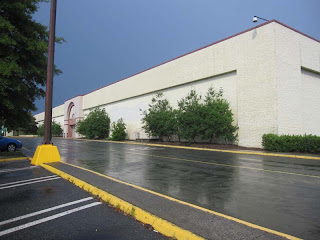 Dillard's stripped away all of the old Ivey's and made it ugly.  It was classy looking before.

Now, look back in time.  Imagine your mom dragging you through the mall at five years old as you tugged her toward the toy store, candy store or pet store.  Imagine spending half-a-day as a preteen milling around the mall to see and be seen while you slurped on Orange Julius.  Imagine you might have had your first job at the mall.  Now, you're looking and seeing how much of your life was spent there.  That may not have mattered at the "always dead" mall, but in a "place to be" like Eastland that really mattered.  In no way can it not be sad, because it is an old friend.  I am a bit unusual in this because I have just felt that way about more than one of such places.  I realize that every one I have been to has a distinct feel and personality even if it looks much like another one. 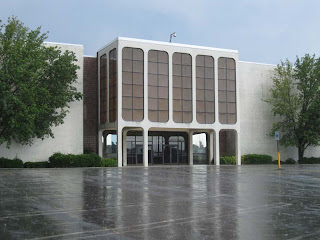 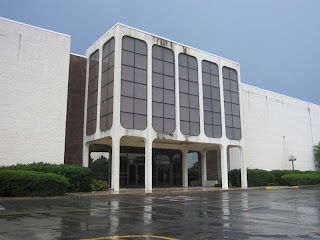 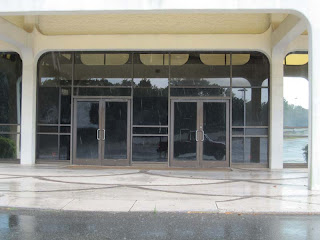 Some would call this Belk ugly, but designs like this really had an outlandish mystique to them.  This is my favorite store outside by far, and the inside looked spectacular in the late 80's remodel.  All photos of that remodel can be found on LiveMalls. 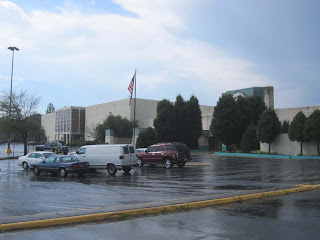 Belk and Entrance A.

The redevelopment of Eastland, in my opinion, will be very tough.  Eastland had so much working against it at the end.  I think what works against it the most is the lack of a hinterland.  The mall used to have that, but that was largely lost due to the US 74/Independence freeway project, which killed off much of the nearby retail.  Malls need stores like Best Buy nearby.  With that, keeping the mall as a mall likely would only work as what Boxer has planned, because in reality I do not see this site as retail anymore: especially not as a mall.  As much as I hate to say it, I think it would probably be best to just demolish most of the mall and convert what is left to offices and condos.  While a "downtown" type project would be nice, I do not think the neighborhood is quite ready to support it.  In fact, this would have probably been a good place for Charlotte/Mecklenburg offices, but because they chose Freedom Mall for that first, this negates that option.  Honestly, I would love to hear what others would think would work best on this site putting their wishes aside that it could be a mall forever.  I know the feeling, because I never want to see a mall die. 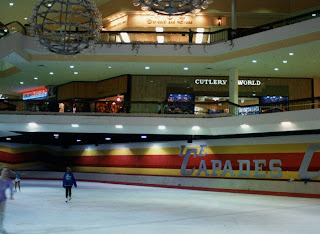 A view from the ice rink level.  Cutlery World is in the background.  Photo by Pat Richardson from 1989. 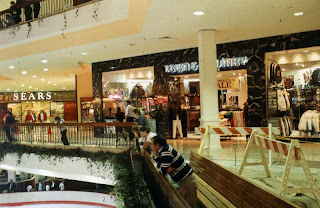 Another store at side of ice rink area/center court.  Photo by Pat Richardson from 1989. 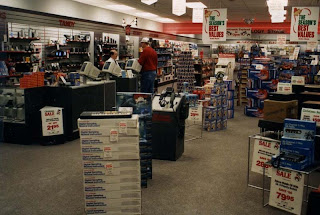 Another view inside the Radio Shack from the previous post.  Photo by Pat Richardson from 1989. 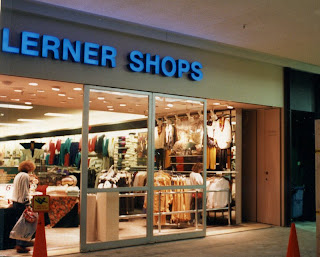 Outside Lerner Shops.  This is very old school looking.  The Lerner I remember had a more elegant logo but in the same blue neon.  Photo by Pat Richardson from 1989.

Eastland was a big mall that captured the love of the populace, so included here are more photos from its past along with more of my own parting photos.  This post captures more historic images of the mall from its first 15 years.  I am glad most of you liked my first post, and I have more to come with Charlotte.  Much more can be found on Eastland Mall at LiveMalls 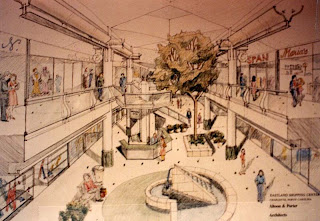 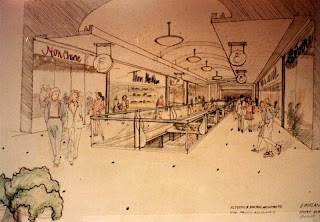 Pat Richardson provided these architectural drawings showing how the 1989 renovation would look when completed. 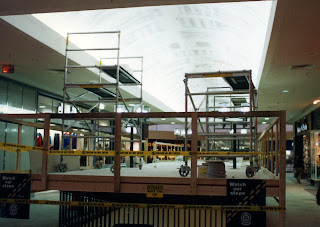 Renovation work here underway.  What did this look like before?  Photo by Pat Richardson from 1989. 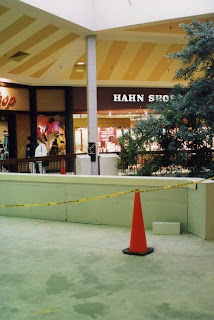 One of the upper level entrance courts with work underway.  I think I liked the original mall better.  Photo by Pat Richardson from 1989. 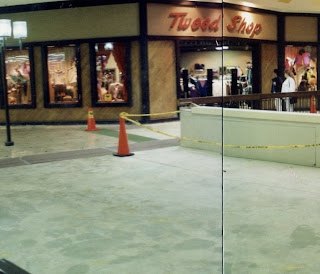 A corner shop with barren floors.  Photo by Pat Richardson from 1989. 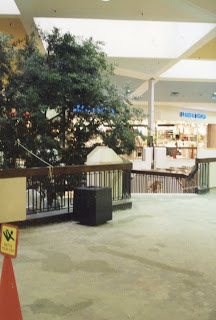 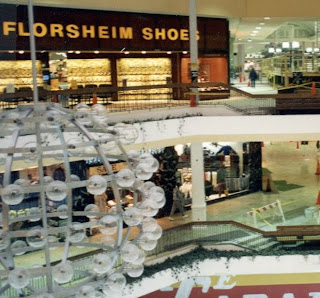 Florsheim Shoes and part of chandelier at center court.  They were once a standard in nearly every mall back then.  Photo by Pat Richardson from 1989. 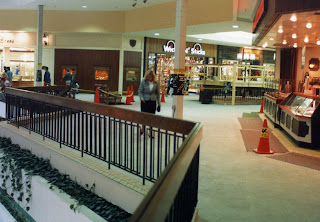 Waldenbooks and JCPenney mall entrance in the background.  The original fountains were already gone.  Too bad they weren't allowed to remain unlike those at Century Plaza.  Photo by Pat Richardson from 1989. 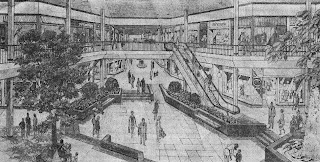 This is a scan from Pat Richardson from 1973 showing how the then-proposed mall would look. 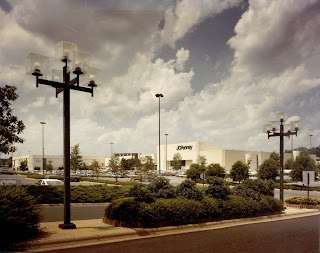