Blink and you would miss Meadowbrook Mall.  That is because it was one of those strange "community" malls of the 70's that were typically the first to join the ranks of dead malls.  Meadowbrook Mall, when opened, was anchored by Kroger and Murphy's Mart, a division of GC Murphy.  Kroger was on the top of the L-shaped mall while Murphy's formed the bottom.  Revco Drugs and a six screen theater later known as Bama 6 also anchored the mall.  In all, it was probably not much different than the Richway malls found in the Carolinas except for the discount store.  The mall featured 171,000 square feet and was constructed by Arlan Shopping Centers.  It opened in October 1977 and housed 30 total stores.  Morrison's Cafeteria, previously located at McFarland Mall, also relocated to the mall after it opened, and the mall was initially successful.  Unfortunately, that "success" was mostly local shops that were hardly a major draw.  Problems arose right away when the owners defaulted in 1979.  From then on, the mall would have a troubled history. 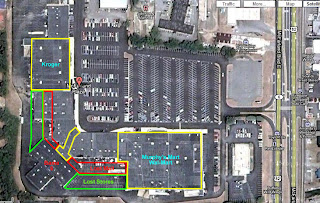 In 1982, Meadowbrook Mall went under new ownership and was then renamed Bama Mall.  This would just be the first of several changes through the decade as community malls nationwide quickly fell out of favor.  The next was the sale of Murphy's to Ames.  Ames obviously was disinterested in the store and put it up for sale in 1985, closing the store.  Soon after, Wal-Mart made its entry into the mall opening in the former Murphy's in 1987.  Wal-Mart had previously been located at Wood Square Shopping Center in an old Kuhn's Big K.  While the mall was in decline at that point, the traffic generated from Wal-Mart kept the mall marginally viable.  This changed drastically, however, when Wal-Mart decided to relocate their store to Skyland Blvd in 1993 after operating there a mere six years.

Aerial shot of the mall looking south with Murphy's on the left, the mall in the center and Kroger on the right.  The first image shows a map of how the mall was originally configured.  Note that part of the original mall corridor remains in front of Bama 6 Theaters. 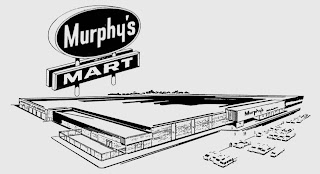 Drawing of the Murphy's store at the mall.

Ad with logo and list of tenants at original Meadowbrook Mall.  Morrison's Cafeteria did not open at the mall initially. 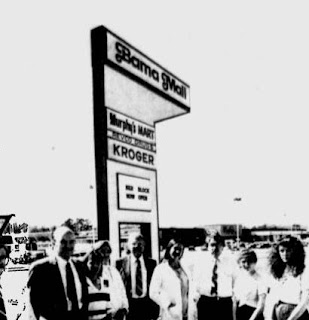 Photo from 1982 at the renaming ceremony of Meadowbrook Mall to Bama Mall. 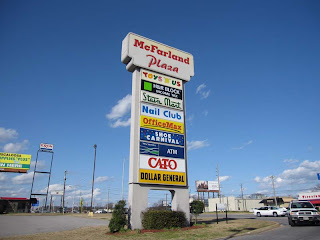 Bama Mall died a slow death up into the early 90's.  However, the departure of Wal-Mart was the final blow to the enclosed portion of the mall.  In 1995, the last tenant in the mall left known as Alrenco.  Kroger had also left as well, replaced by Delchamps in 1994 and Bruno's later in 1998, which has also apparently since closed.  At that point, the mall owners felt the best course of action was to let the existing tenants fronting the mall expand their stores lengthwise through the mall corridor.  Two had already done so, Cato and Big "B" Drugs, thus the owners felt that the best use of the dead mall was to do the same for the rest of it.  At that point, the Bama 6 theaters were all that was left requiring mall access, and they continue to operate at the mall into the late 00's.  As a result, since the mid-1990's the original mall never really disappeared, it was simply filled in to appear like a regular strip mall.  By 2001, all of the mall was gone except for the portion immediately in front of Bama 6 Theaters. 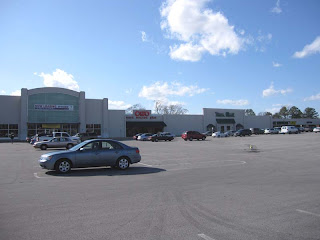 A look at the Kroger wing of the mall, which today is subdivided into smaller tenants including Cato and Stein Mart.  Old Navy was on the left. 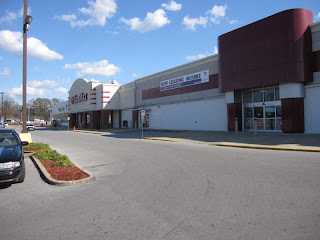 A look at the Murphy's/Wal-Mart wing.  The wing was subdivided into Toys 'R' Us, Office Max and Circuit City (closed, in the foreground). 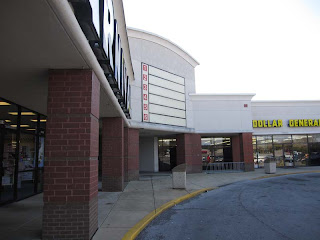 Entrance to Bama 6 Theaters in the center, which was previously the only direct entrance to the mall before it was demolished.  This is all that remains of the original mall today.

Since 1995, the Wal-Mart was subdivided completely into smaller tenants.  Campo Electronics (today Office Max) and Toys "R" Us were included in the original redeveloped store.  When the rest of the mall was gutted into individual front-facing shops, the front was renovated and the name changed to McFarland Plaza after McFarland Blvd.  Tenants a few years ago included Circuit City, OfficeMax, Old Navy, Shoe Carnival, SteinMart, Toys R Us and Bama 6 Cinema.  Both Circuit City and Bama 6 Cinemas have since closed, but the redeveloped strip mall continues to do fairly well, but is showing signs that it is beginning to struggle.  The main problems are that Circuit City planned to move in 2007 and is now out-of-business, and Bama 6 Cinemas also closed in 2007.  Old Navy also left the center for a new lifestyle center constructed across from University Mall recently as well.   If not for the vacant Bama 6, however, there would be no way to tell this was ever a mall.  The subdividing of Kroger and Murphy's/Wal-Mart disguised its past even more.  Basically, Tuscaloosa's second mall is now long forgotten as a basic strip mall, but it formed an interesting chapter in a city that has been overmalled for over 30 years. 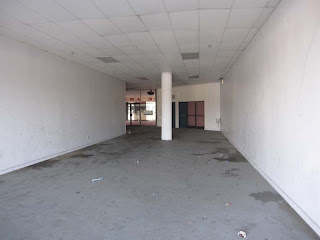 A dark, dirty, musty and lonely corridor leads from the parking lot to the Bama 6 Theaters.  These must have been quite seedy at the end. 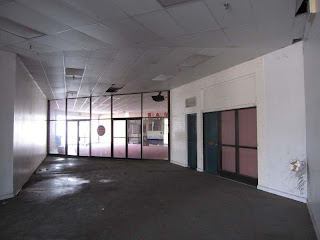 Approaching the entrance to what is left of the mall corridor in front of Bama 6 Theaters.  What was that store to the right? 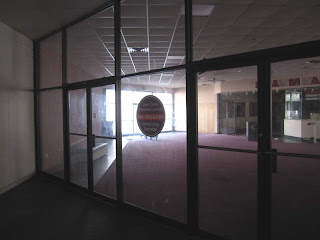 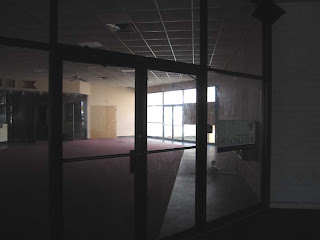 Oddly, where the mall continued on each side of the theater entrance was replaced with doors to the outside in lieu of just walling it off.  These doors enter to what is now the back of the strip.  It is rather spooky. 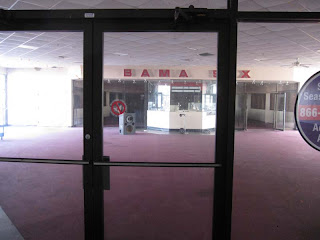 Looking straight on at the box office fronted with a hideous shade of purple carpet.
Posted by J.T. at 6:00 AM