North DeKalb Mall is today approaching its third phase of existance. It is one of the least known of the metro Atlanta malls, but is over 40 years old and a survivor considering that two other malls of its vintage are both gone: Cobb Center and Columbia. Opened in 1965, North DeKalb Mall was a small T-shaped mall with a two-story Rich's on the east end and two junior anchors on the west end, which appear to have been a Woolworth's and Colonial Supermarket or even possibly a Cracker Barrel. In many ways it was a sister mall to Cobb Center. It remained a very successful mall serving the growing suburbs from Decatur north, but was marginalized early on by the construction of much larger Northlake and Perimeter, both completed in 1971. Historicaerials.com has a photo of the mall in its original configuration. Supposedly this mall was originally open-air, but as recent as 1968 the mall appears to have been fully enclosed with small skylights. 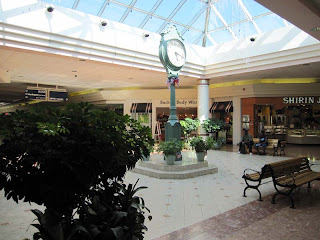 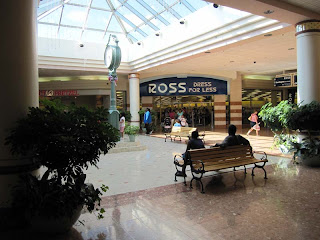 The first and second photos both are of the east court, featuring this big clock. The corridor to the left (original mall) in the first photo heads to the Macy's (former Rich's). In the second photo, Macy's is to the right. The second photo is one of the two Ross mall entrances.

Fortunately, North DeKalb survived because of the fact that mall developers avoided adding a Rich's to Northlake. Northlake had Sears, JCPenney and Davison's...but not Rich's. In addition, white flight from Memorial Drive south was drawing more traffic to the mall than would have gone there otherwise. If not for Rich's continued success, North DeKalb would likely have been demolished by the late 1980's or early 1990's. However, it began declining in the 1980's, and that is why the mall today looks nothing like it did when it first opened. 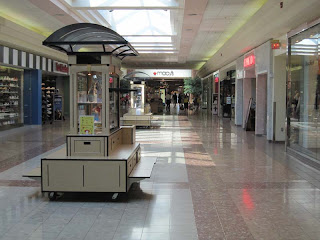 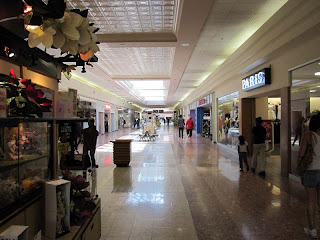 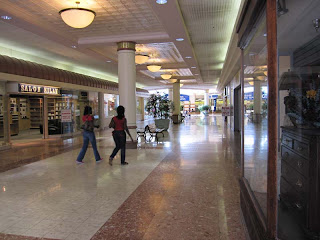 In 1986, North DeKalb Mall was extensively renovated and renamed "Market Square at North DeKalb". This renovation brought a Mervyn's, Upton's and Lechmere to the mall bringing anchors to the area that distinguished the mall from the others in the area. Ross and Stein Mart joined some time later, but it is not known exactly when they arrived or when Stein Mart left. The Rich's at North DeKalb also got a shot in the arm that year when the Rich's at Belvedere Plaza on Memorial Drive shut down for good. This renovation was wildly successful, and completely altered the layout of the mall with a diamond shape that also added an Applebee's and a food court. This unusual shape was undoubtably intent on trying to build a mall on the same footprint since there was no other way to expand the mall. See this mall map for an explanation of this (I have saved the map for when the mall is redeveloped). Unfortunately, a much greater expansion would have helped the mall more so that it could have competed on a more level playing field with Northlake. 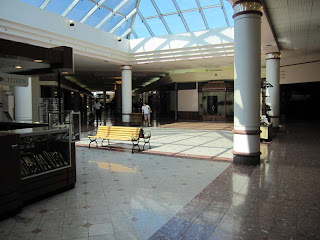 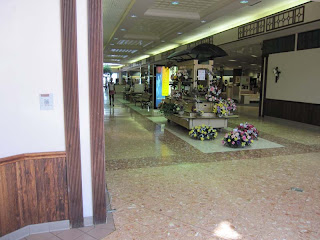 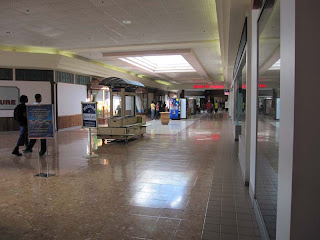 Photos include view of south court, view looking down the southeast wing and view looking down the south wing. The southeast wing is really strange: it is part of the mall itself but also a store. While it has a pseudo entrance, the walkway through it is mall while the stuff on each sides is the store. This was a Rhodes Furniture when I visited in 2004. Today it is a local furniture store. The south wing (last photo) is the wing to AMC Theaters that originally opened as a Lechmere.

In the early 00's, "Market Square" was renamed back to North DeKalb Mall. By the middle of the decade, North DeKalb was also becoming very troubled. It's solid list of tenants was constantly being shaken up by bankruptcies such as Lechmere in the early 1990's, Mervyn's in 1995, Upton's in 1999 and Rhodes Furniture in 2005. The mall replaced these vacancies with stores like Burlington Coat Factory (in the old Mervyn's), Ross Dress For Less (presumably in the old Upton's) and an AMC theater (in the former Lechmere). With such age and competition, the mall has been managed extremely well, but the renovation is aging, the traffic is slowing and pressure is mounting. It didn't help when Rich's merged with Macy's in 2004. The Macy's (former Rich's) at the mall is now in direct competition with the Macy's (former Davison's) at Northlake, and ultimately only one of those stores will survive. Considering that previously dated and dumpy Macy's at Northlake has just been renovated and the old Rich's at North DeKalb has not, it is a bad sign. Only one of these two stores will ultimately survive since they are so close, and only because of the ailing condition of Northlake Mall has this remained in doubt. The last plan for the mall involved building a parking deck and adding a Costco. Neighborhoods around the mall fought the plan, but the Costco was kept. The problem with the reworking of the plan is that it will be the end of the center as an enclosed mall. 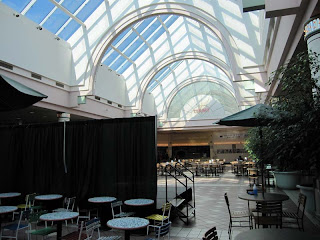 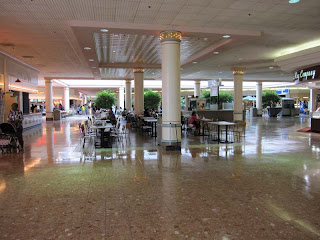 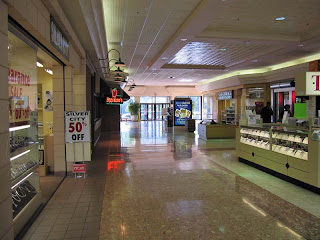 The Food Court makes up the west court of the mall. The first photo is approaching it from the side and the second features the huge domed skylight over the main seating area. The last is looking back from the food court to the west (rear) entrance. Note the Applebee's on the left. This is approximately where the original Woolworth's was located.

2009 looks to be approaching the end of the line for North Dekalb after nearly 45 years of business. The redevelopment plan will become a cluster of big box stores traversed by a new street cutting right through the existing mall corridor. The Rich's/Macy's and the remaining big boxes will be retained in the new center, but what remains will likely all be extensively renovated until it is unrecognizable, including Rich's. The webmaster went back and took much more extensive photos of the mall as it looks to be suddenly dying compared to last visit when the mall was still quite vibrant. The Rich's, however, seemed busy as ever, so perhaps maybe the reason that North Dekalb has lasted as long as it has will be allowed to stay. 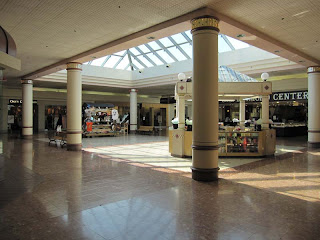 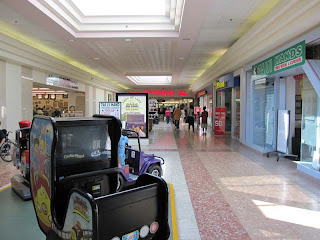 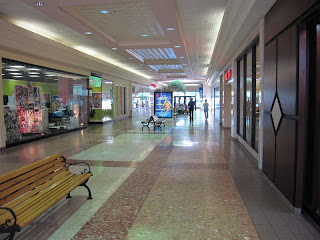 First photo is view of the north court followed by photos of the north wing to Burlington Coat Factory (former Mervyn's) and northeast wing to parking lot (Ross comes off of this wing as well). 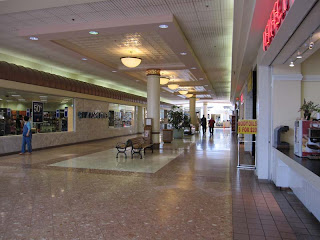 This photo is looking from east court (at the clock) to north court. 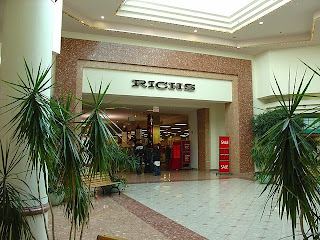 Rich's mall entrance prior to the changeover. 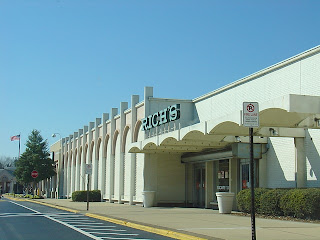 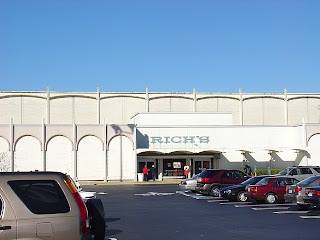 Two views of the south entrance to Rich's. This was the best preserved part of the original facade. Note the letters mounted on poles! 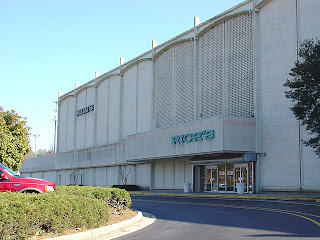 Rich's north entrance falls short of original, but luckily the green signs were retained in the 1986 renovation. Note that the display windows next to the door were covered up as well as the original arched awning. That is still visible underneath the ugly stucco cover. 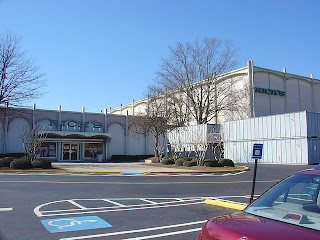 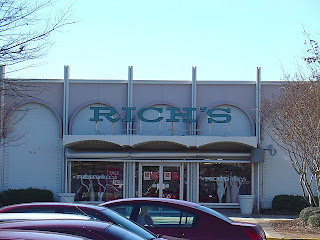 The east side features two entrances. The one-story wing entrance was completely original. The second photo focuses more on it. 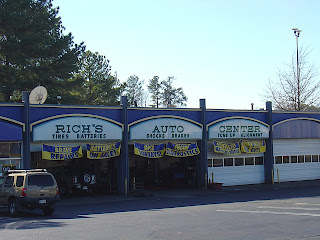 The last daytime shot of Rich's focuses on the auto center. It, too, was completely original from 1965.

Now for some night shots: 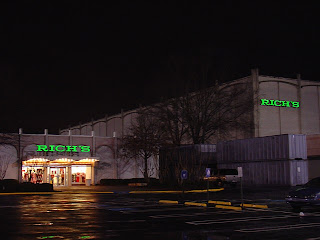 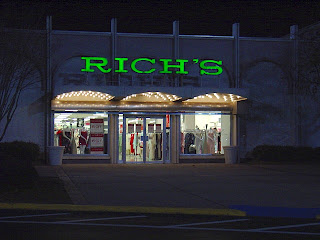 Rich's southeast entrance at night. Note the lightbulbs under the arch. 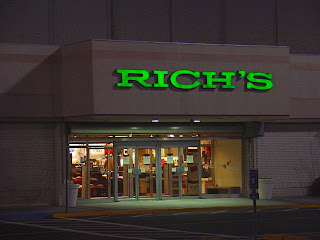 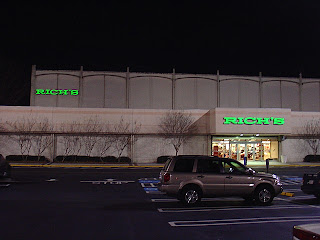 Rich's east entrance at night. The lower sign is in better shape because it is newer: note the forementioned stucco awning. 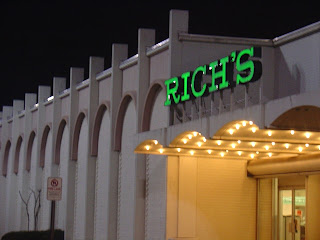 One more look at the south entrance: this time at night. This is my favorite angle of the store. The Macy's sign that is here now is in a big white box in lieu of these poles.