Tucked in a town about 20 miles north of downtown Greensboro, NC is a mall trapped in time.  While nothing fancy, Pennrose Mall is one of the most vintage mall specimens in North Carolina.  The mall itself gets its unusual name from the nearby Chinqua Penn Plantation once owned by tobacco tycoon Jeff Penn.  Most likely, this mall would have long since died, but with the strength of its main two anchors, small size and unusual configuration the mall has limped along to succeed as a glorified community mall.  Reidsville is also a relatively blue-collar city that recently lost most of its major industries, and with a population of under 15,000 residents according to the 2000 census, it has become difficult for the mall to remain relevant.  Worse than that, better shopping in Greensboro means that any hope of significant upgrades to the mall is very unlikely.  The advantage, though, is a nostalgic enclosed mall gem holding out in the Piedmont. 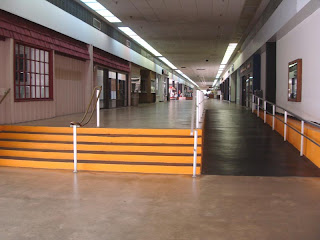 Pennrose Mall opened on October 23, 1968.  When it opened, the mall had two anchors: Rose's and Prago-Guyes.  Rose's was located in the middle and Greensboro-based Prago-Guyes on the north end of the mall with Rose's remaining as the sole original anchor today.  Belk arrived on August 5, 1970, and its arrival signaled a transfer of partnership.  The downtown store it replaced was Belk Stevens, but the mall store opened as Belk Cline!  Belk Cline was one of several Belk partnerships that were not signed, and this store was no exception.  Other stores that opened with the mall included Peanut Shack, First National Bank, Golden Touch Dry Cleaners, Royce Shoes, Blue Bell Factory Outlet, Jewel Box, Bob Adams Florist, Singer, News 'n Novels, Strader's Shoe Store, Hodge Podge Hallmark Shop, City Barber Shop, Venus Coiffures Hair Stylist, and Hodge Podge China & Gifts.  Winn-Dixie also opened on an outlot on the north end of the mall.  Both Strader's Shoes and Bob Adams Florist appear to still be operating in the mall!  Thus, at its peak the mall contained 18 stores.

Today, Belk forms the south end of the mall with little changing since it opened other than the logo.  Since it is built into the mall structure, it appears that it might have been vacant space before Belk took over in 1970.  Prago-Guyes went out of business in 1978 with JCPenney arriving later to take over the space in 1986.  JCPenney itself left the mall in 2001 after only 15 years.  Belk and Roses both continue to operate at the mall, but for how much longer is uncertain.  Belk (as of 2016) sealed off their entrance to the mall. 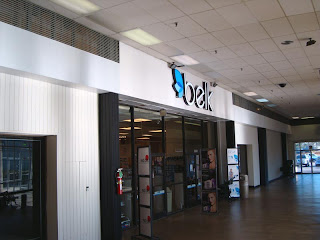 Belk's mall entrance features the new logo at stark contrast to the aging center.  The first photo shows the ramped section of the mall between Belk and Rose's suggesting the later addition of Belk to the mall.  Photo by digital sky taken February 19, 2011 (above) and August 3, 2011 (first photo). 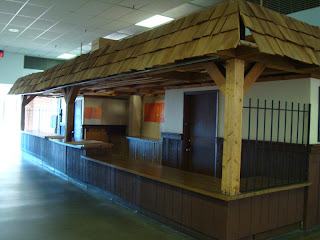 Empty kiosk in the mall of unknown use.  Photo by Digital Sky taken February 19, 2011. 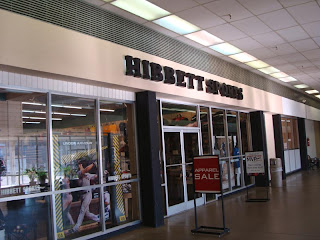 Hibbett Sports.  One of only about three non-local shops in the mall.  Photo by digital sky taken February 19, 2011. 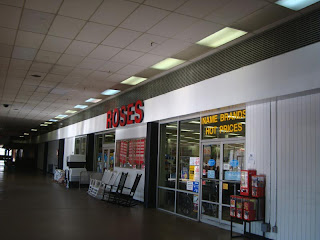 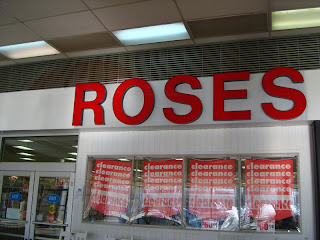 Pennrose Mall features a strange configuration where the anchors are built into the east side of the mall while no anchors are situated along the west side of the mall: only smaller shops.  It is a modular one-sided configuration where the front part of the mall could easily be torn off to revert the center into a regular strip center.  Furthermore, Rose's in particular is not accessible except through the mall.  This pretty much forces shoppers of Rose's to enter the mall, benefiting smaller shops in the mall but also making all of those shops very dependent on Rose's own success to draw traffic.  Belk and the now-closed JCPenney, however, both have a side entrance which allows shoppers an alternate entry since there is no direct entrance from the front without entering the mall.  Belk at current is now only accessible from a side entrance. 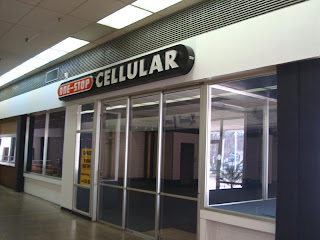 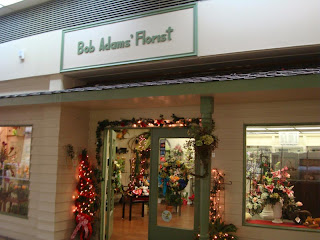 One Stop Cellular and a local florist catering to your needs.  This means you can buy your phone there, get it set up and call the florist instead of ordering in person since it is such a long, harrowing walk between the two shops.  Photos by digitalsky taken January 19, 2011 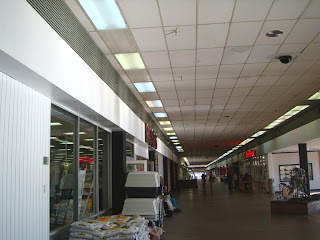 Rose's is on the left and Belk is down the hall.  The Rose's outside entrance is to the right.  Photo by digitalsky taken January 19, 2011. 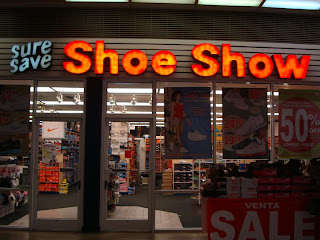 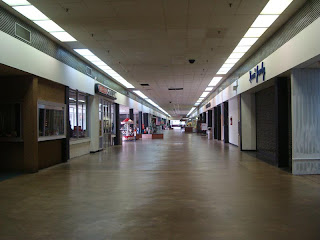 What is also distinctive about Pennrose Mall is the complete lack of modernization.  Other than some minor repainting, the mall is in a complete time warp with concrete floors, interior brick walls, spartan design and an over-sized front entryway.  Other than the doors, there is otherwise no natural light inside the mall itself.  Most malls like this were either renovated, closed or demolished by the 1990's, so finding one like it is rare if not impossible in the 2010's.  What is also notable is the metallic awning that extends just below the ceiling the entire length of the mall.  To say the least, it is about as inviting as a middle school built in the era.  The only real draw are the steps between Belk and Rose's, which break the otherwise straight shot of the mall.  Outside, the mall features metal panels over the main two mall entrances that appeared to have originally been anodized aluminum but were painted over at least twice: puddy colored before and now a marine blue. 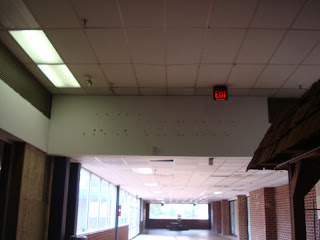 Looking up the north end of the mall approaching JCPenney.  You can see the labelscar above.  From this angle, the mall looks more like an enclosed strip mall.  Photo by digitalsky taken August 3, 2011. 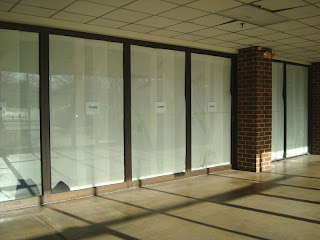 Mostly covered glass for JCPenney.  The sign in the window reads "Closed" so that you do realize that there is glass there and you can't just walk through it.  Photo by digitalsky taken February 19, 2011. 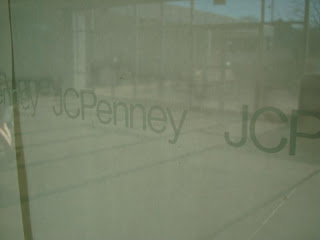 Reading this is like listening to a skipping record.  I love it when they do this, though.  Reminds me of the repeating "R" on Rich's in the 70's and 80's.  Photo by digitalsky taken February 19, 2011. 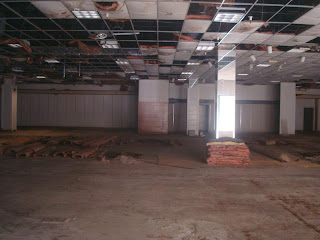 This is what they didn't want you to see...the decaying hulk of JCPenney sitting idle since 2001.  Ten years of decay really shows...I guess the heat and humidity do their work even if the ceiling is maintained.  Photo by digitalsky taken February 19, 2011

Today, Pennrose Mall is in an awkward position.  Nearly every major route has by-passed the downtown area, including the mall.  While it retains its status as the main area of retail in the city, any new construction would quite possibly lure Belk and Rose's away, leaving the mall lifeless.  Interestingly enough, the mall seemed to be doing decently up until the past 10 years and was likely fully leased up until JCPenney departed.  Not counting the anchors, in 2011 the mall had about 7 of its 15 shops occupied.  Of those stores, Shoe Show, One Stop Wireless and Hibbett Sports remained the only other reason to go there with the rest mom 'n' pop stores.  The mall would be very easy to de-mall into a strip mall because of this, though hopefully it never comes to that.  If it was done, it would be as simple as demolishing the mall up to the back anchors giving Roses and Belk direct access to an extended parking lot. 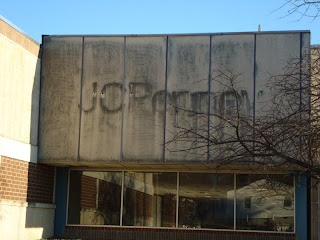 On the north end of the mall is this creepy labelscar for JCPenney left behind on the outside.  They must have run out of blue paint before they reached this end of the mall.  Photo by digitalsky taken February 19, 2011. 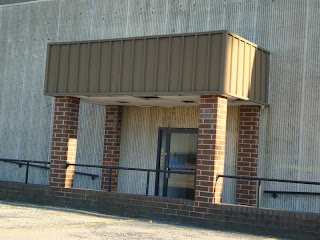 Side entrance to JCPenney.  Now HOW did Winn-Dixie manage to be in a store like this?  I still cannot believe it was really here, but Globman's I could definitely see in this space.  Photo by digitalsky taken February 19, 2011 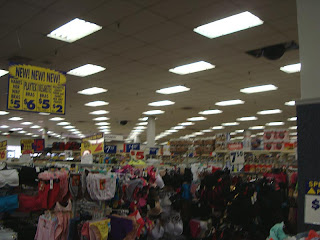 Rose's inside looks pretty well unchanged from the day it opened.  I'm sure it smells that way, too.  Photo by digitalsky taken January 19, 2011. 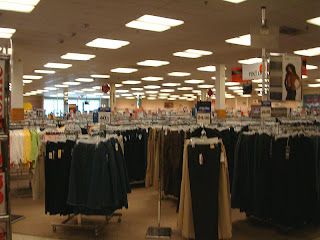 No luck finding those vintage blouses with shoulder pads on e-bay?  Just look here, you're bound to find it!  This Belk store looks about as dated as the one I saw at Tri-City Mall.  Did it open as Belk Beck?  Photo by digitalsky taken February 19, 2011. 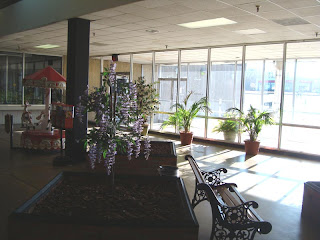 The doors, lobby and breezeway are just huge!  Were they expecting the place to be swamped?  Was it ever?  Photo by digitalsky taken February 19, 2011.

Pennrose Mall is also in a unique position to expand with vacant land behind it and a vacant Winn-Dixie, which closed in 2005, on the outparcel.  The only current obstacle is the Social Security building.  Imagine just cutting a new mall wing between the Belk and Rose's into a backwards L-shaped mall wing.  While hardly a SouthPark, the mall could probably support smaller box tenants such as TJ Maxx, Books-A-Million, a Peeble's or a gym.  Belk could also expand into that space as well.  Belk could also expand into the empty adjacent shops (gaining a new mall entrance), and the grocery store on the back side could be connected into the mall making it more attractive to potential tenants.  In all, this is fantasy but some of these ideas could be tried in the existing space as well.  However, the greatest likelihood is that Rose's and Belk are going to bail.  Belk is probably looking at just skipping town while Roses probably is looking to occupy either the former Winn-Dixie or the nearby dead Kmart.  If they don't, then redevelopment into a regular strip center will likely be a requirement for them to stay.  As a regular strip center, they would be more likely to attract tenants into the old JCPenney while Belk and Roses would both be able to expand. 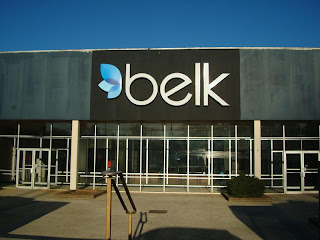 Belk's updated logo on the mall entrance looks very much like an afterthought compared to the more appropriate older logo.   Photo by digitalsky taken February 19, 2011.

Rose's, however, looks completely approrpriate on its entrance.  In fact, this may be the best that sign has looked on any building.  Photo by digitalsky taken February 19, 2011. 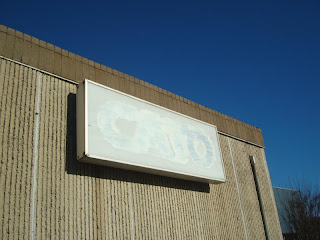 A whited out Cato sign flanks the outside of the mall showing that national chains do have a history there.  Photo by digitalsky taken February 19, 2011. 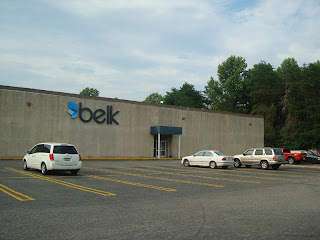 Belk's side entrance looks more like an emergency exit.  The concrete basement-like wall isn't too beautiful either.  Couldn't Belk at least spruce this up?  Photo by digitalsky taken August 3, 2011. 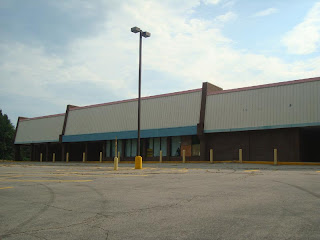 In all reality, Pennrose Mall still exists because the town currently does not present an attractive enough opportunity to redevelop the center.  It's small enough to maintain as is, too expensive to redevelop and the anchors are staying put for now with limited retail development around the city.  All the mall really needs is a good way to fill the empty space, a more attractive look inside (such as a couple skylights) and a larger draw.  While outmoded, it is still small enough and interesting enough to find some creative ways to make it work although small, rural malls are very much out of fashion.  Its last owners let the mall go in 2005 with the current owners Malachite Group, not really investing in it.  Whatever happens, it is absolutely remarkable that with so many malls that have failed or been redeveloped that a relic like this still has a functional department store and remains open to the public. 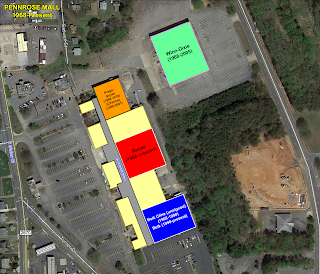 This map shows the anchor history of the mall, including the now abandoned Winn-Dixie on the outlot. 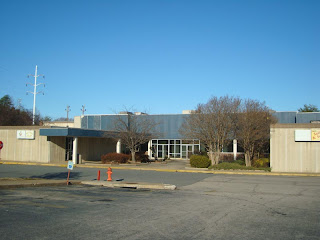 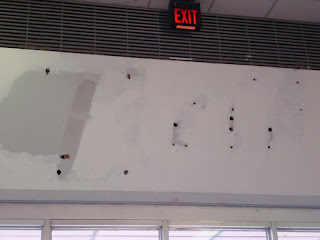 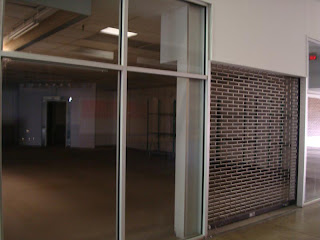 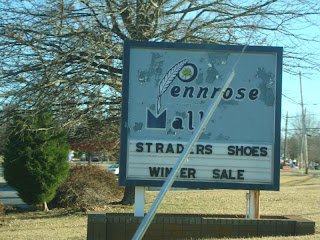 The condition of this sign suggests it's been there quite awhile.  Is this sign original?  Photo by digitalsky taken February 19, 2011. 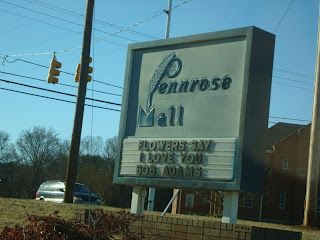 I definitely cannot deny the sign looks cool, but it's also a little strange.  Photo by digitalsky taken February 19, 2011.