High on the Allegheny Plateau in West Virginia, Greenbrier Valley Mall is located in remote region lacking the population and growth to have much in the way of retail, but due to its position as a junction of an interstate and major US highway it has managed to create a small hub of development being located along I-64 in the city of Lewisburg.  While not large enough to support a major mall, the mall boom did not pass up this area with the mall opening along busy US 219 in 1979.  While tiny, the mall is surprisingly very striking architecturally compared to many rural malls built in the era.  In fact, the attention to detail and architecture is quite elegant with its gabled roof canopies over every store, wood shingles and faux doghouse windows on the canopies, triangular ceiling pitches around the high window skylights, colonial-style glass storefronts, old fashioned street lamps and brickwork.  It was as if they were attempting to re-create a colonial city street inside an enclosed mall.  It was probably helped by the fact that they initially drew West Virginia's best department store Stone & Thomas as the primary anchor tenant. 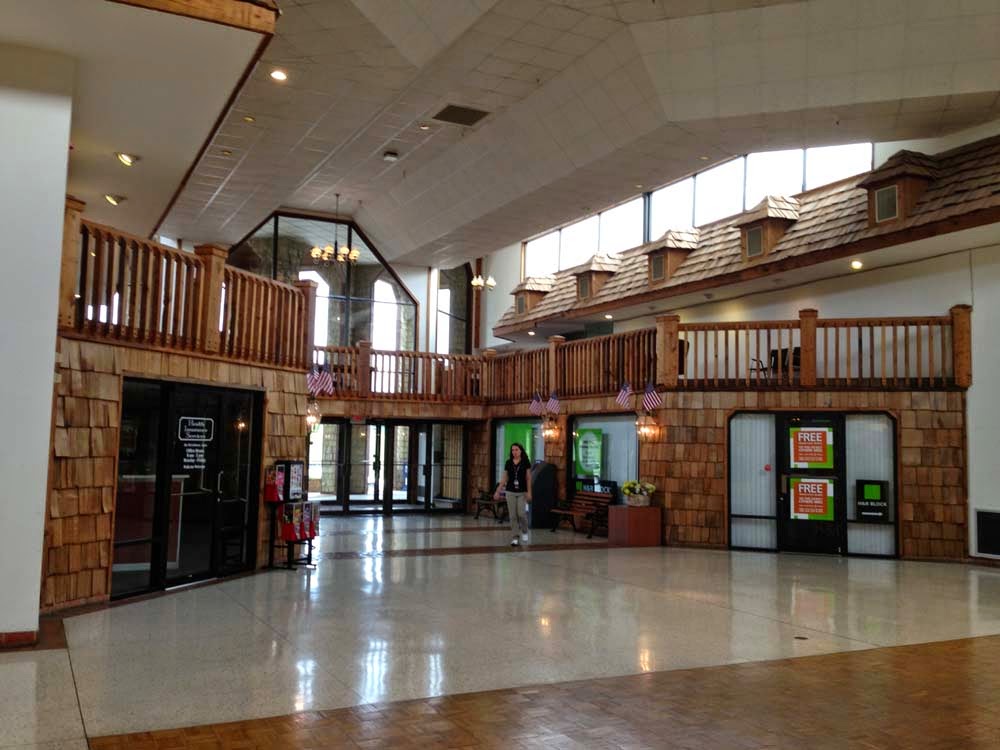 Curiously, most of the older retail development of Lewisburg did not locate near I-64.  This is probably because Lewisburg is actually the northermost of three populous areas in the county with the mall located in the middle.  To the immediate south is the unincorporated town of Fairlea where much of the retail development, including this mall, is located.  Further south is Ronceverte, which is the second most populated city in the county.  The mall is also located on US 219, which is the second most important transportation artery in the region connecting Lewisburg to I-77 in Princeton and Corridor H/US 48 in Elkins.  It also is just north of the WV State Fairgrounds designed capturing customers from traffic headed to and from the fair. 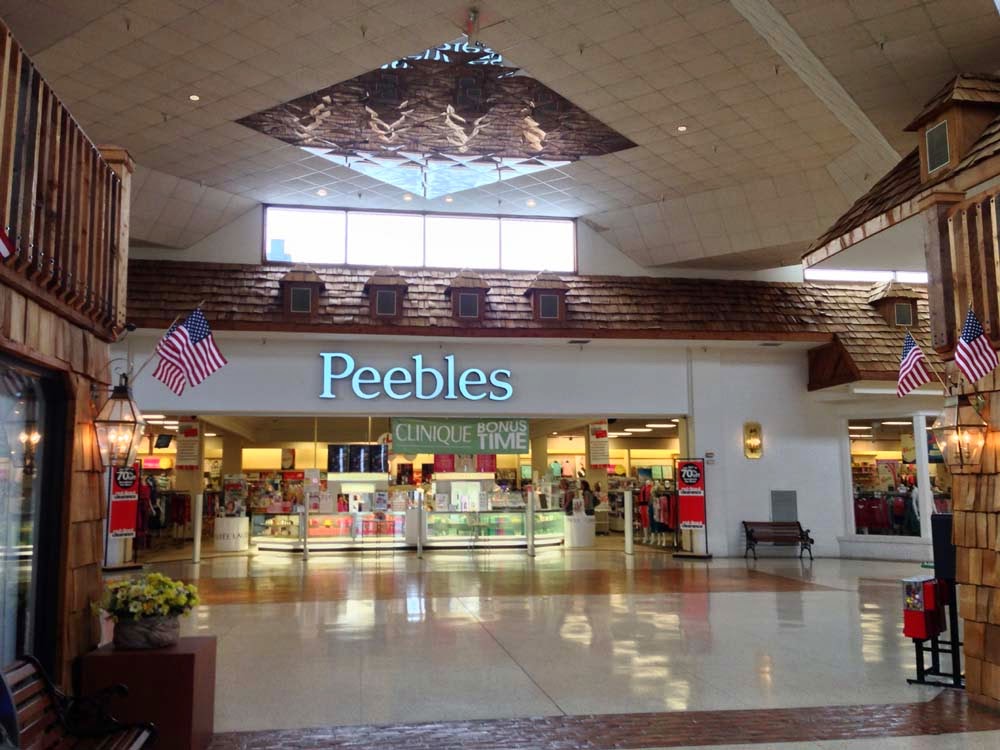 The first photo shows the interior of the main entrance, which goes into center court.  The railing is not decorative since there are actually offices on that upper level.  It is the centerpiece of what is a pretty elegantly designed mall for 1979, especially for a small town in the coal belt.  The second photo is looking the other way towards the main entrance to Peeble's, which operated as Stone & Thomas until 1998. 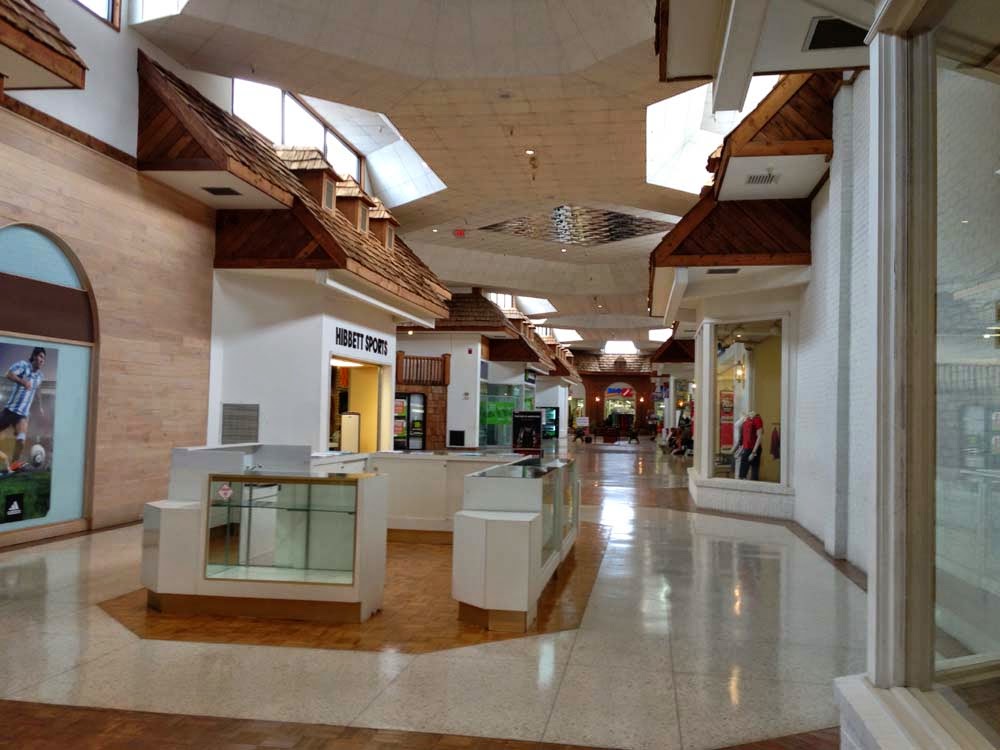 A view of the left side of the mall looking toward Kmart.  Hibbett Sports has an outside entrance as well as mall access. 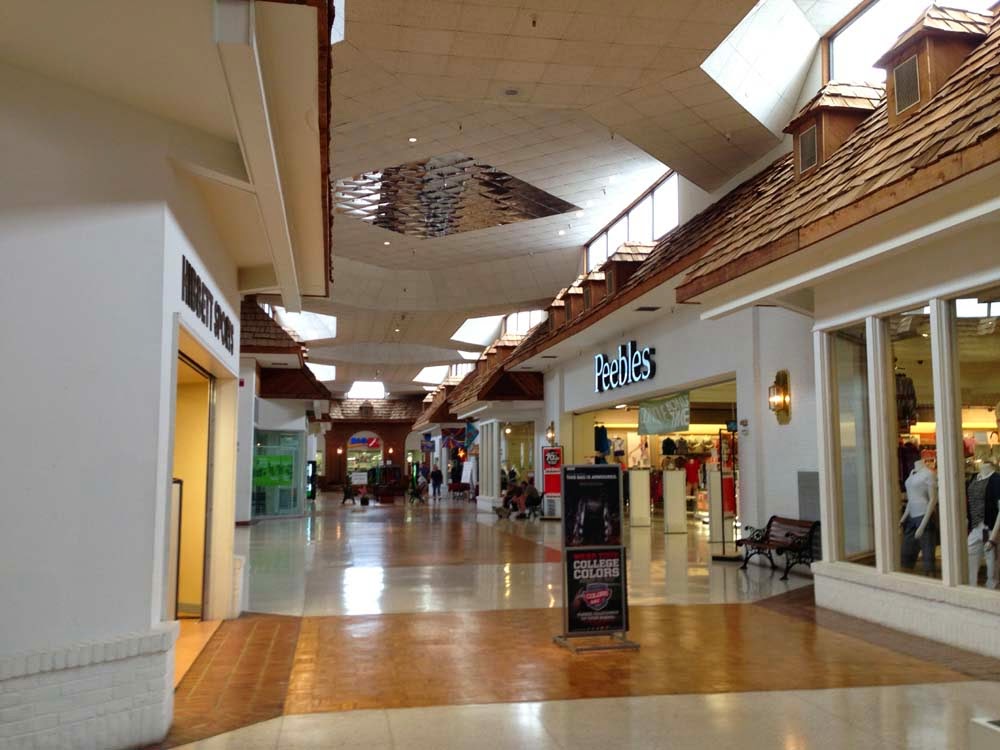 This angle is looking from the right side just shy of center court toward Kmart. 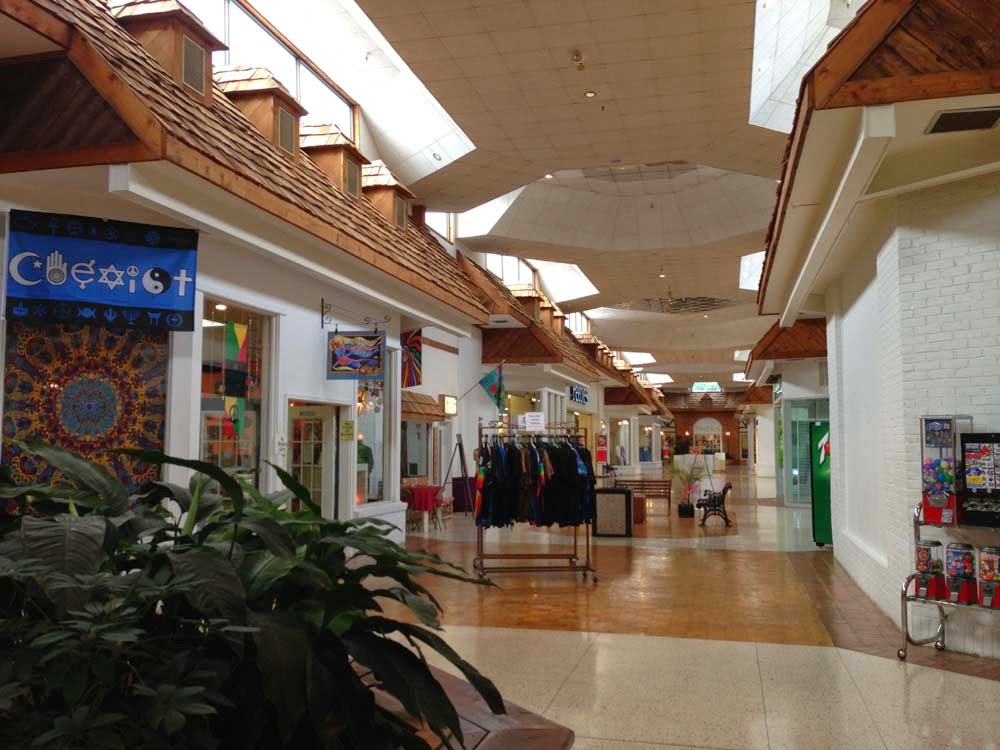 This is standing in front of the Kmart mall entrance back toward the east end of the mall. 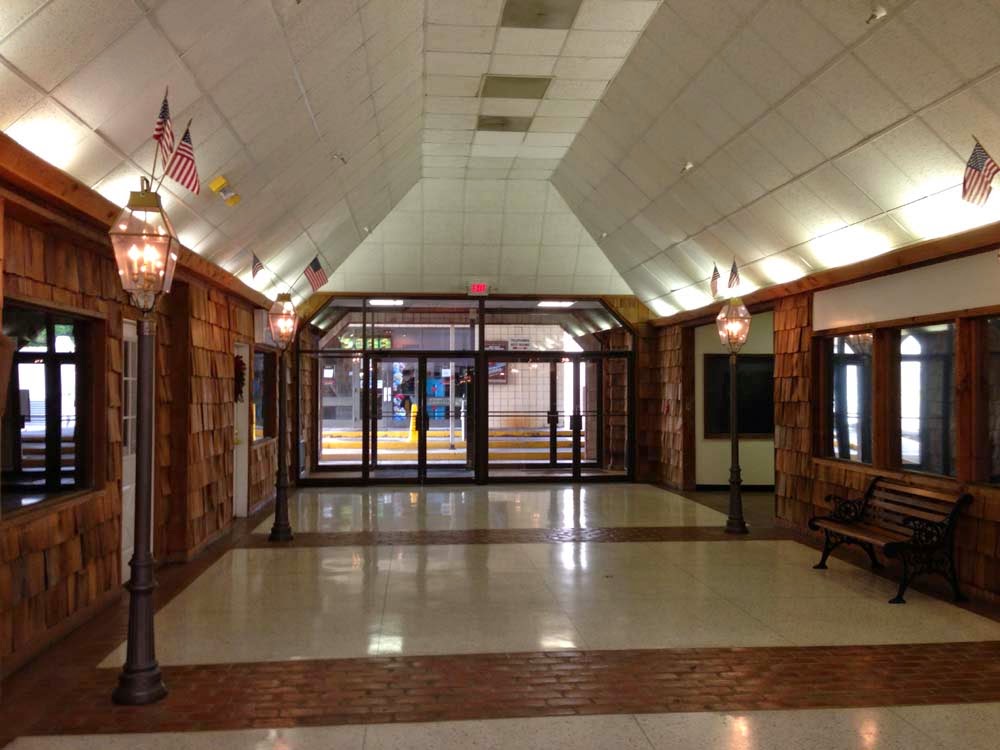 Pitched "Star Wars" ceilings are found along two side corridors.  This one extends back between Kmart and the main entrance toward the movie theater.  The movie theater is detached from the mall via an outside breezeway. 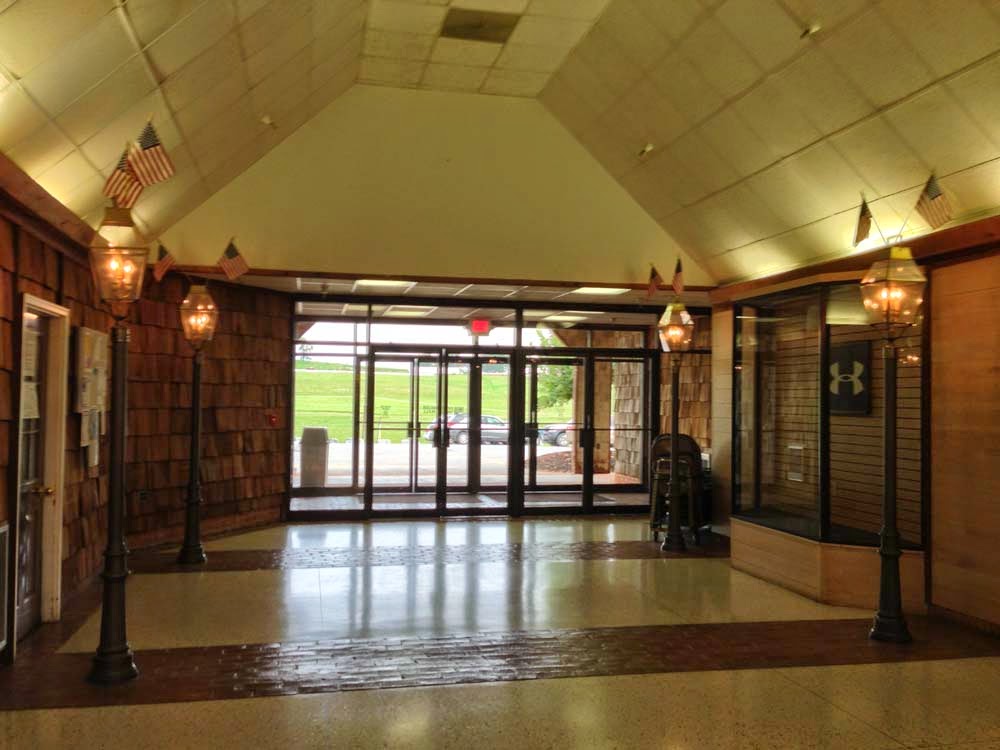 The front north entrance wing has a similar design to the back theater wing.

Typical of many smaller community malls, Greenbrier Valley Mall is partially a strip center and partially an enclosed mall.  It has also seen many anchor changes over the years since it opened.  Along with Stone & Thomas, the mall was also anchored by a Heck's discount store and an Elliott's IGA supermarket.  Elliott's closed sometime in the 1980's to be replaced with Barnhart's IGA for a period of time.  That store today is Save-A-Lot.  The most dramatic changes came with the south anchor, however.  Opening as Heck's, Heck's was acquired by L.A. Joe in 1990.  L.A. Joe failed quickly as a chain closing two years later.  After L.A. Joe closed, the store was demolished and replaced with Kmart, which opened on May 6, 1993.  As part of Kmart, it appears that the mall was reconfigured for the Kmart adding ramps to the store suggesting that Heck's had been level with the mall while Kmart is lower than the mall itself. 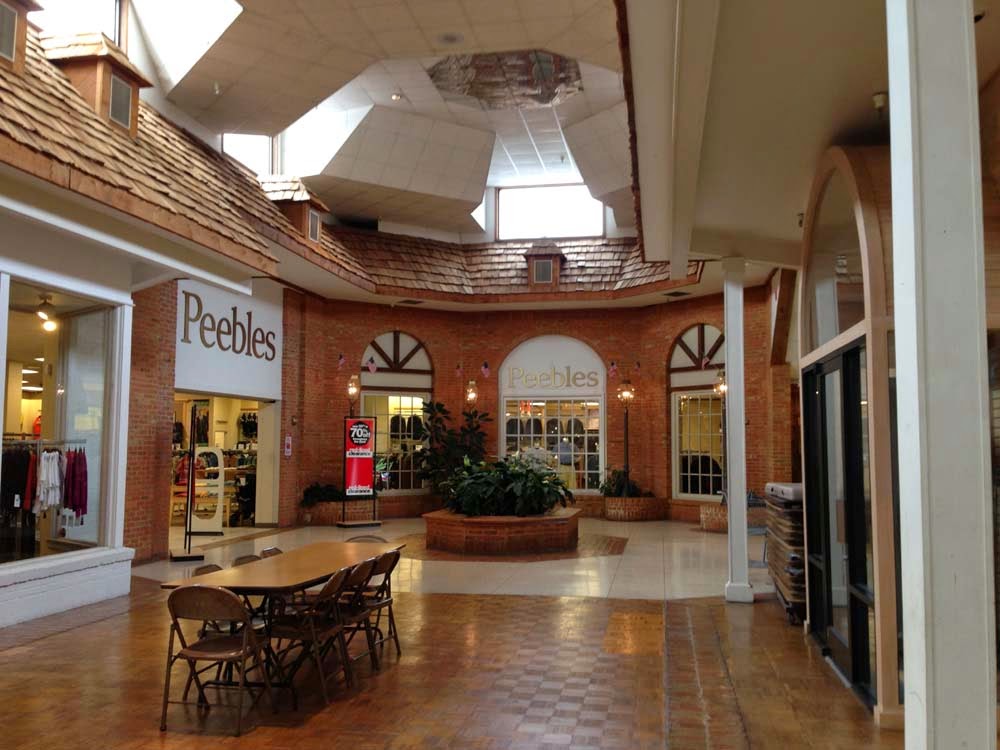 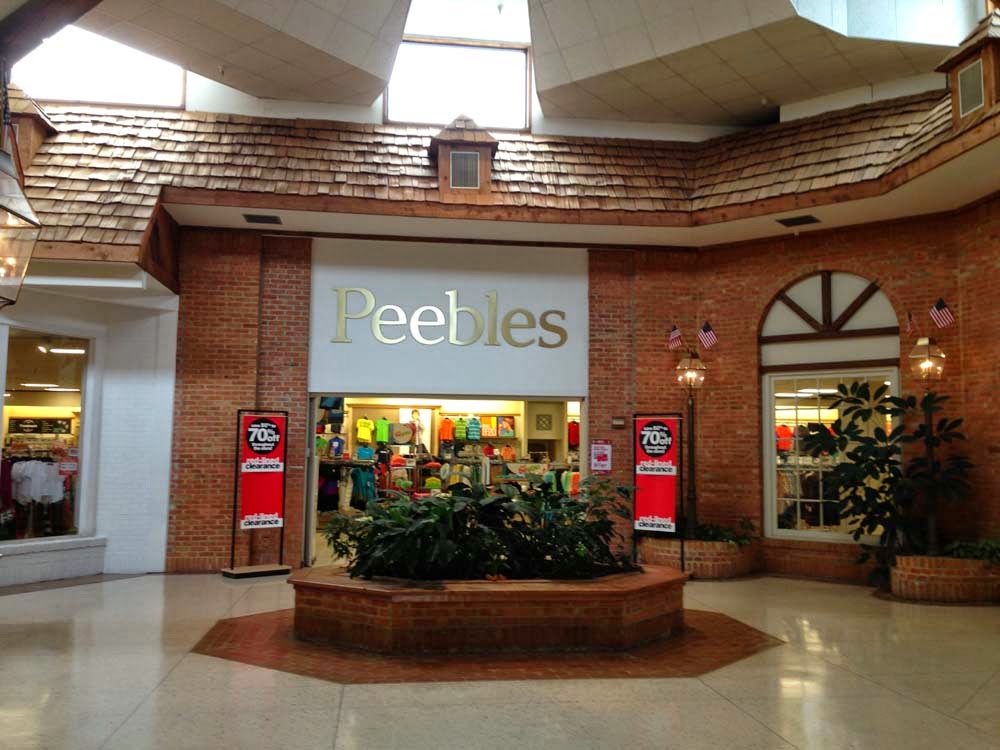 Peeble's secondary mall entrance is misleading in that the entrance is actually facing the north entrance wing with nothing but windows facing the main mall.  Obviously Peeble's does not build stores like that, so it was clear that Stone & Thomas was a much more fashion-forward store than somewhat dowdy Peeble's.  I can only suspect that Elder-Beerman passed on this store due to its small size and the low population of the area around it.  Boutique department stores were rarely operated by large chain stores and rarely have been successful. 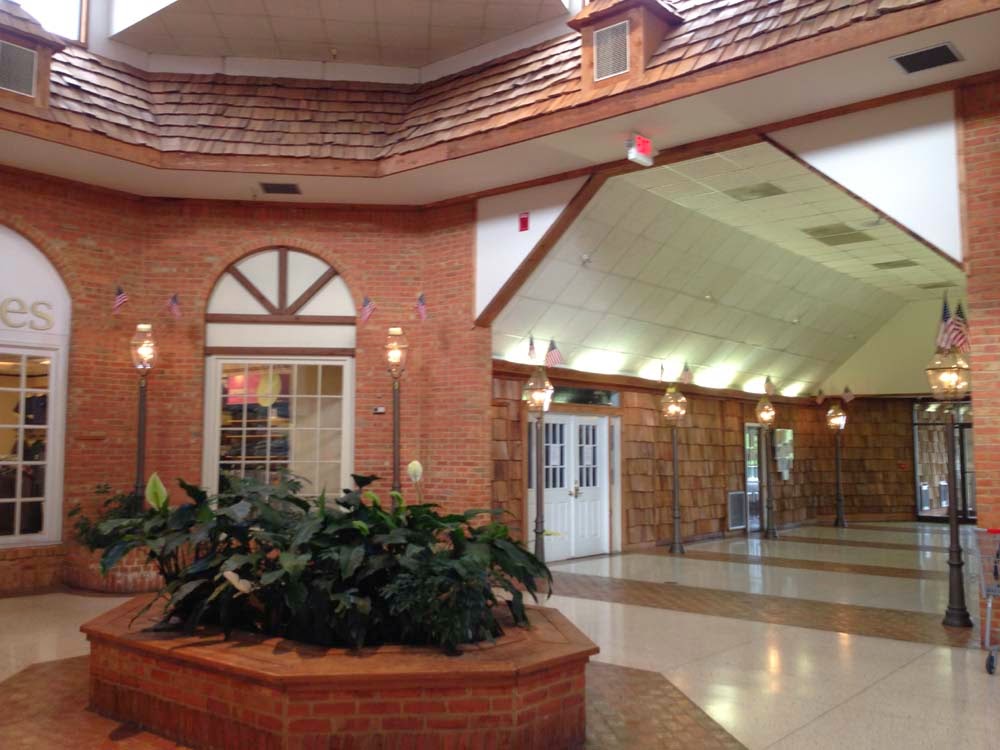 The east front entrance wing is very short, and it appears that Peeble's uses the entire store space on the east side of it. 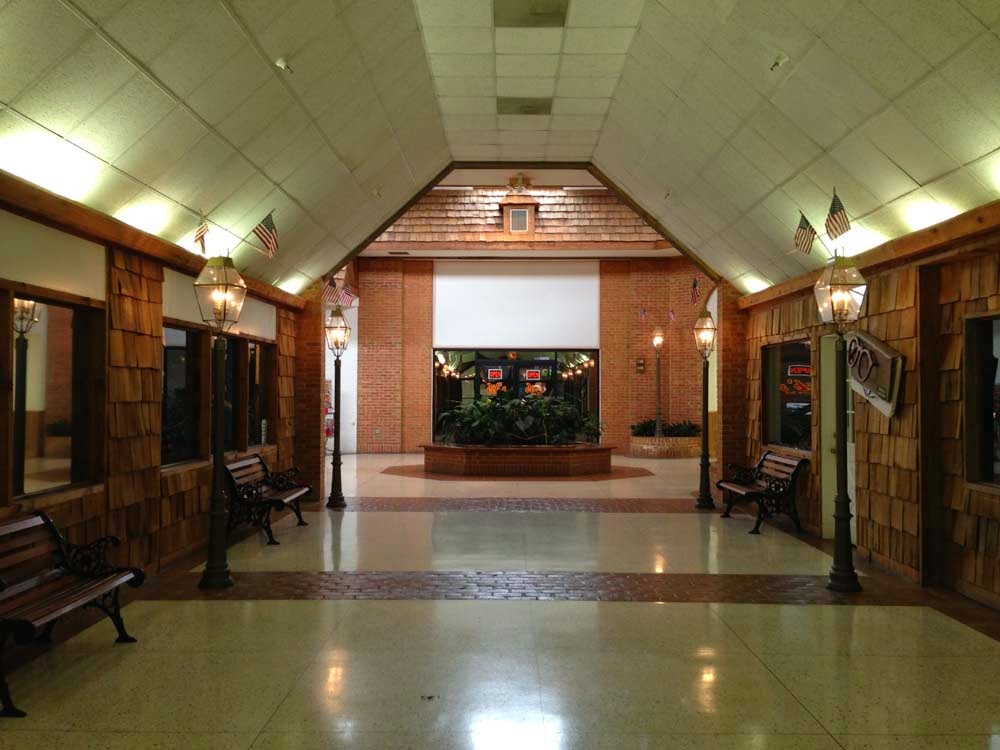 The pitched ceilings give the mall an almost cathedral-like feel looking back from the theater entrance into the main mall.  Should I shop or should I pray?  Maybe I should pray that this mall doesn't get torn down any time soon? 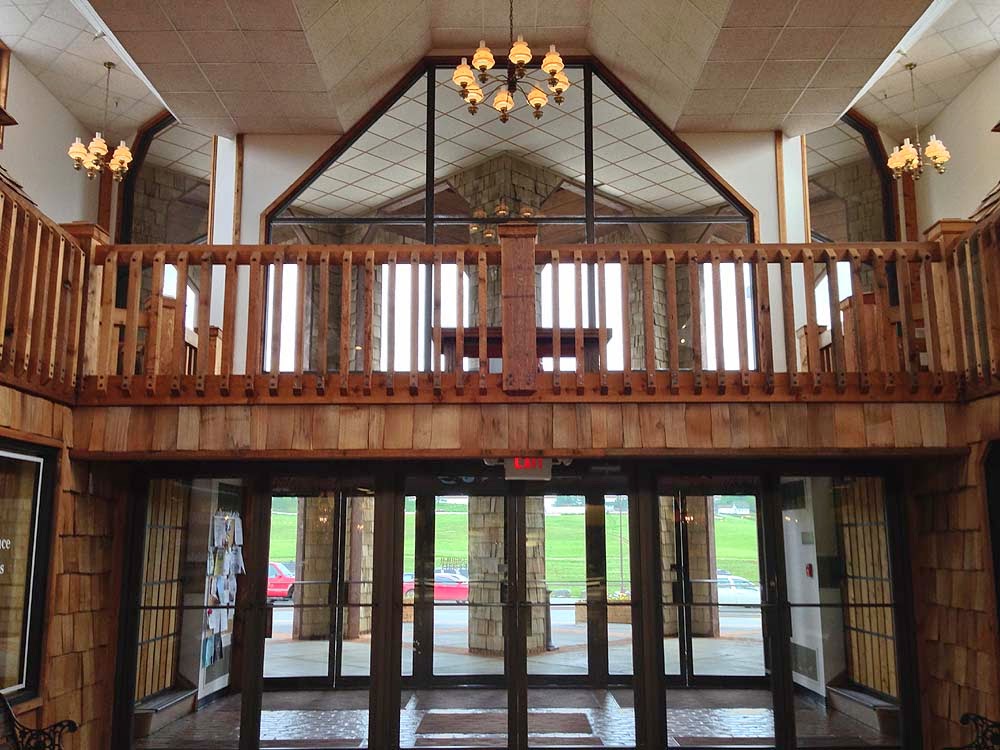 The main entrance looks like an altar build to the god of shopping, but the tabernacle of ceiling tiles seems to be suffering from a decline in attendance and membership 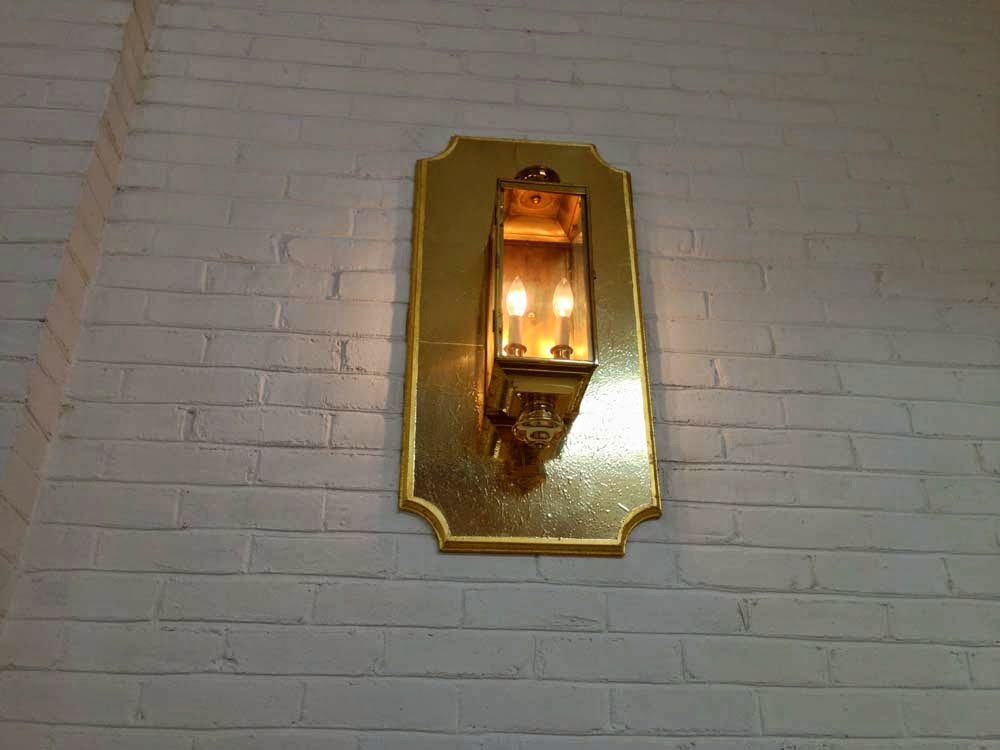 Indoor faux street lamps.  These were only found in the golden age of malls.

Stone & Thomas was the only true department store anchor.  However, the chain was bought out in 1998 by Elder-Beerman.  In that buyout, some stores were instead converted to Belk and Peebles.  In this case, Peeble's took over the location, which was likely the smallest store in the chain.  Stone & Thomas has a very odd configuration in the mall forming a backwards L shape on the NW corner of the mall situated within the bounds of the mall itself.  While the store entrance is in the middle of the mall, the store itself wraps around to the north end of the mall.  The mall also contains a theater on the back side connected to the mall via a rear wing.  Other tenants found in the mall in the 1980's included Shoe Show, Cato, a jewelry store and mostly local tenants.  Bonanza Steakhouse was also located on an outparcel. 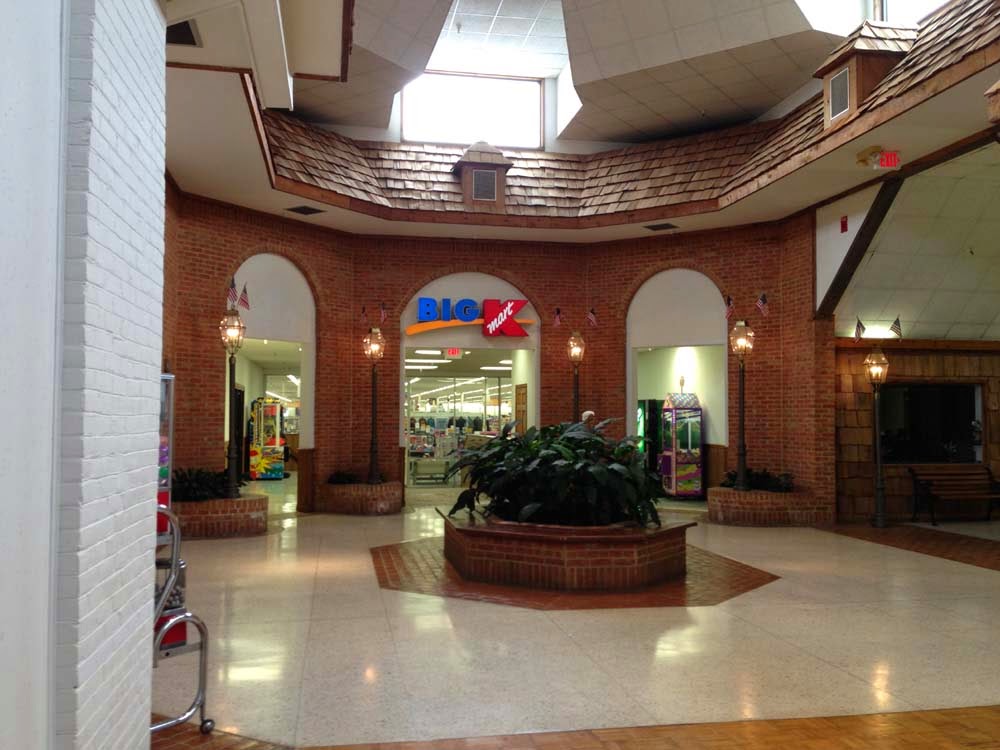 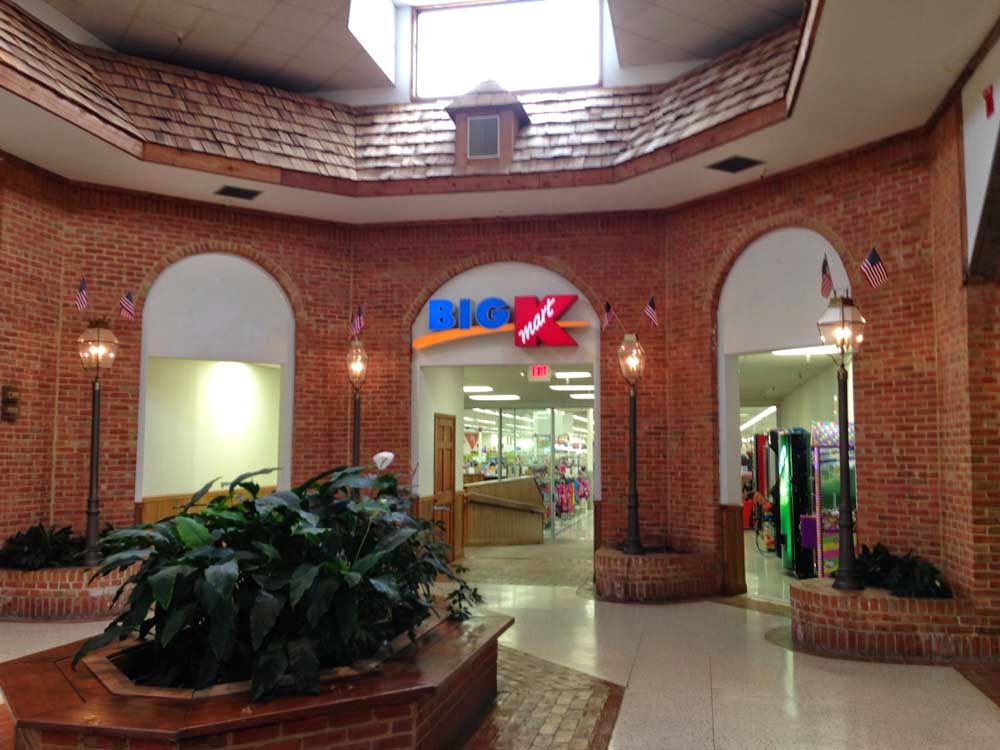 Kmart's biggest fans, including someone I know, should find this place positively holy.  Kmart has the same elegant treatment as Peeble's, but it looks like the entrance was altered suggesting that possibly Heck's/L.A. Joe did not have this mall access. 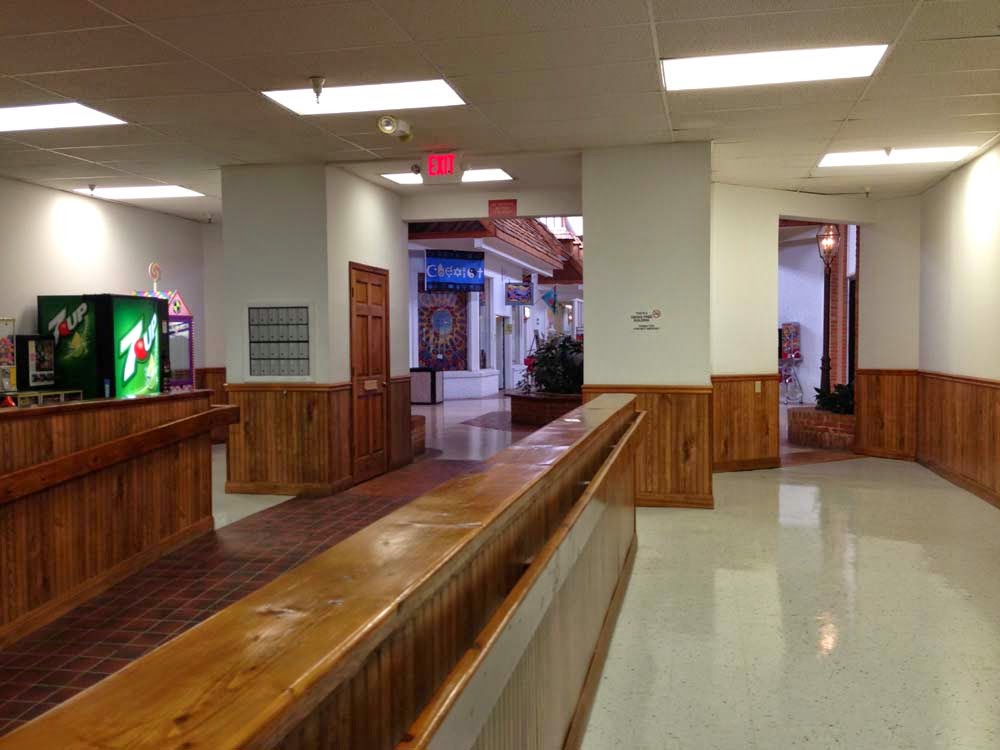 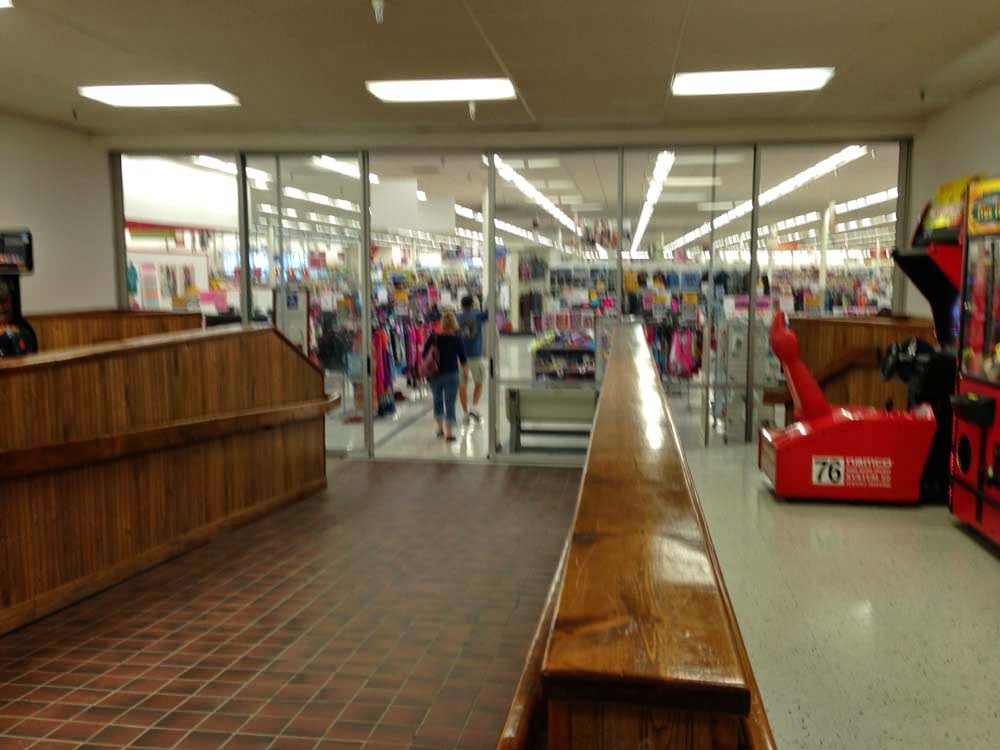 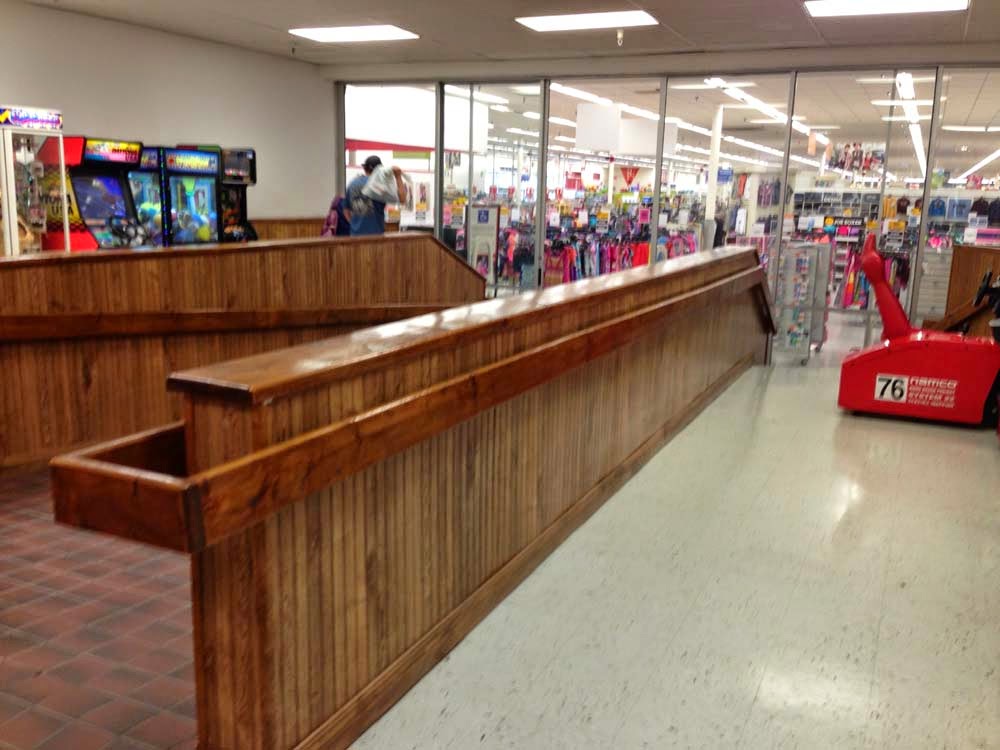 Kmart's transition area from the main mall to the store is a strange little room with a ramp that appears to have been originally smaller tenants. 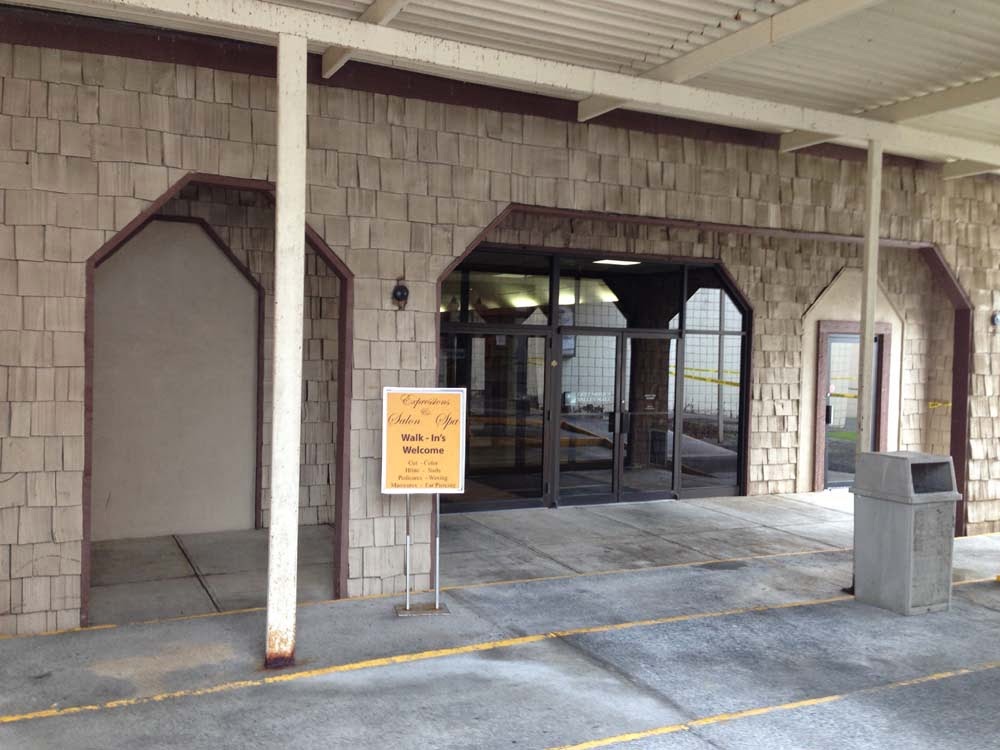 This is the back entrance from the theater to the back of the mall.  This is the only access to the mall from the rear.

In all, the geographic isolation and lack of interest in new retail development is what keeps this mall afloat.  Aside from Wal-Mart and Lowe's, most retail development is much older in the area.  However, the main Achilles heel of the mall is that its largest anchor tenant is Kmart.  With Kmart continuing to close stores, it will be difficult to fill this store when they close (UPDATE: Kmart announced it was closing this store in June 2017).  It is the third largest big-box tenant in the area with Wal-Mart and Lowe's both established on the other side of the city.  It is questionable if the demand is there in the market for any store in the area to relocate.  The most likely candidate would be Kroger, which operates an older greenhouse store at Red Oak Shopping Center not far away.  Kroger could simply renovate the Kmart space operating as either a large format Kroger or a Kroger Marketplace.  Otherwise, the store would likely be subdivided with something else (or nothing at all) taking the side of the store located furthest from the mall. 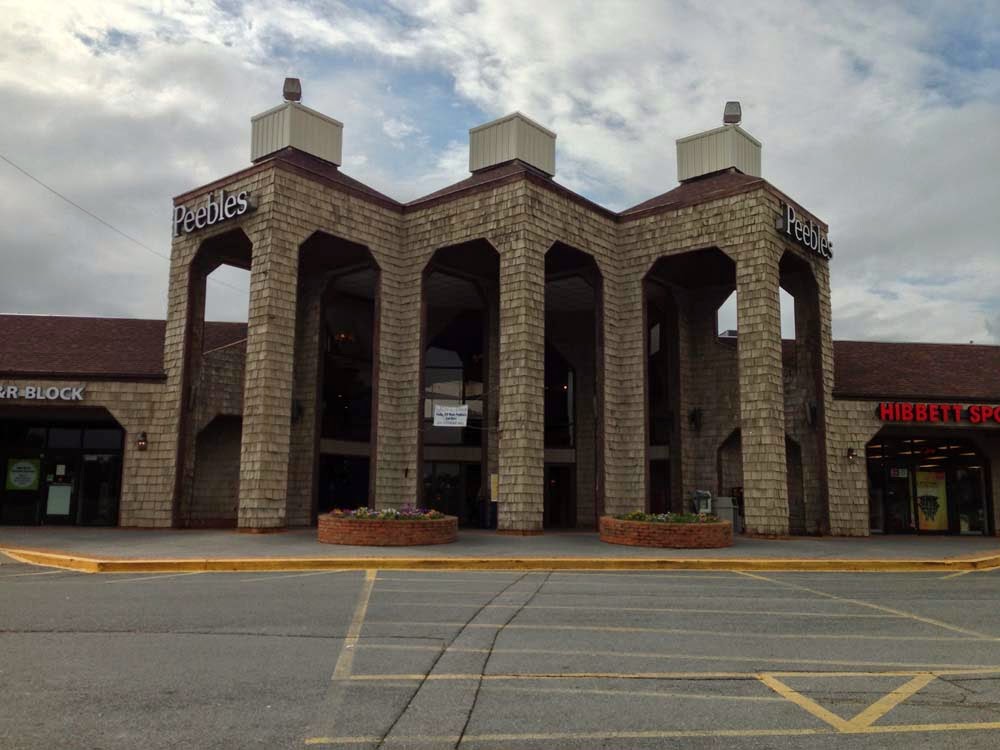 Close-up shot of the main entrance to the mall.  Some outside tenants adjoining the main mall may not connect to the mall directly such as H&R Block. 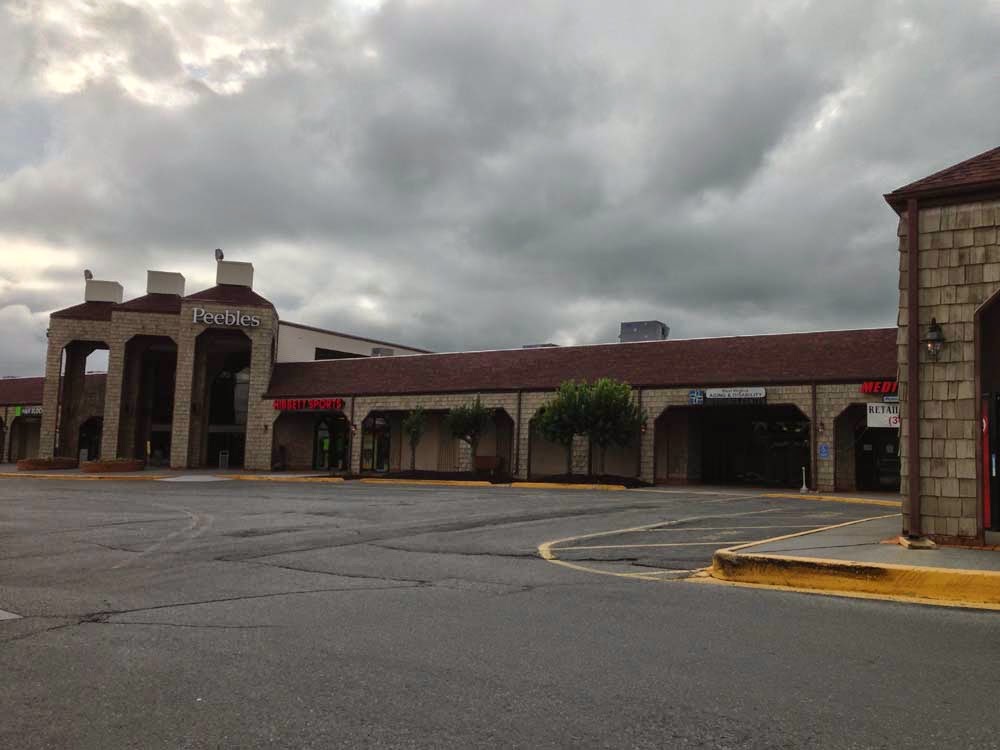 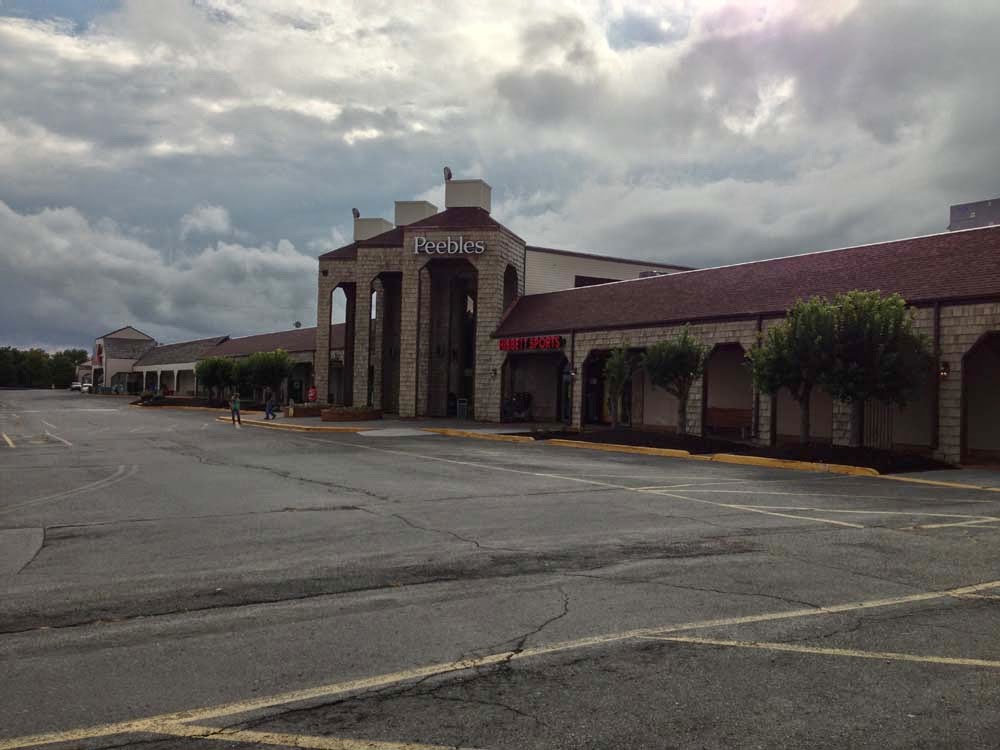 A broader angle of the mall looking toward Kmart 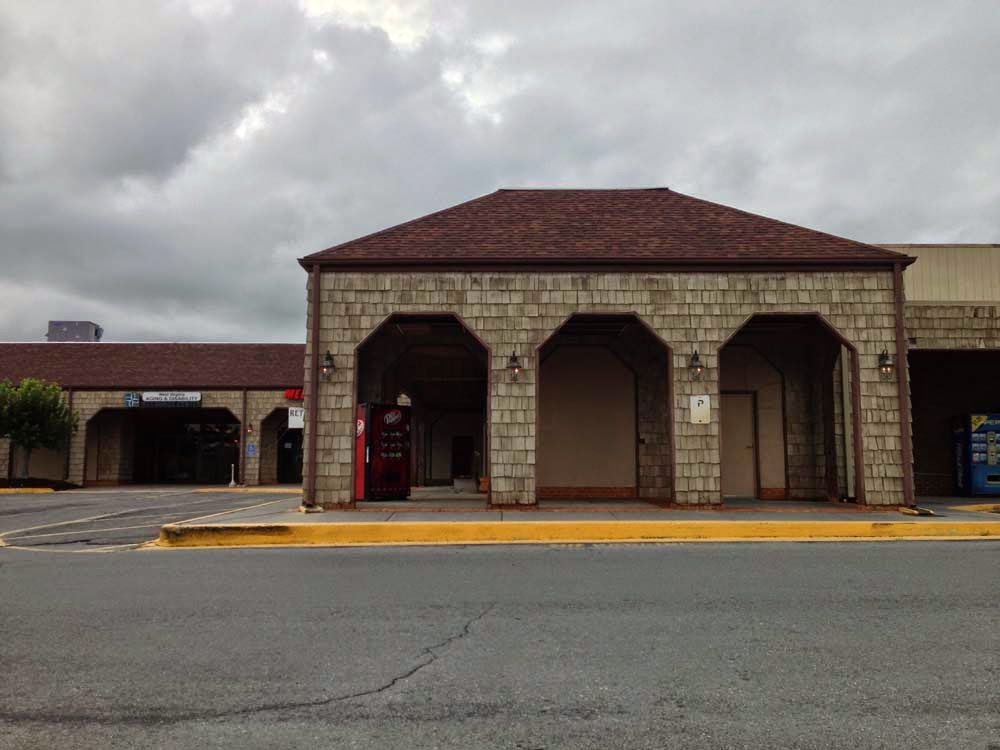 The strip portion of the center extends from the east mall entrance out further into the parking lot then turning back east as a strip with Save-A-Lot and Advance Auto Parts not connected to the mall. 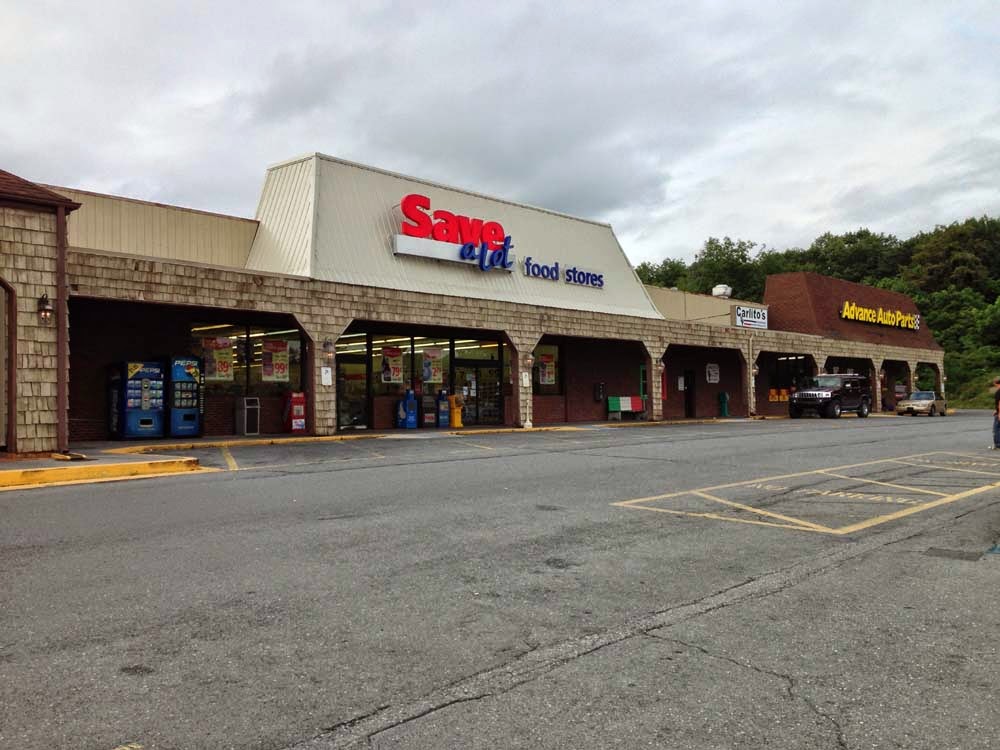 Save-A-Lot, originally Elliott's IGA and later Barnhart's IGA flanks the strip portion of the mall on the east end.  It is unclear what Advance Auto Parts was originally.

What I would personally like to see happen if Kmart leaves is that Peeble's takes over the Save-A-Lot with the mall expanded to connect to the Save-A-Lot (cutting through the current store) and Kroger Marketplace takes over the current Kmart space.  I would imagine that if this alone was done that the popularity of Kroger and expansion of Peeble's would help boost the mall's fortunes helping it to draw a few more chain stores.  The front-facing tenants should also be reconfigured so that they can handle larger, most likely be junior anchor tenants in lieu of smaller stores.  If necessary, the stores should be expanded further into the parking lot to make this happen with possibly single large tenants taking up the entire side of a wing much like Peeble's does currently.  The back side tenants could remain smaller tenants including local shops and service-oriented stores with lower rent than the front-facing tenants.  This would be the best way to help an aging small town mall remain competitive in an era where most enclosed malls are no longer viable. 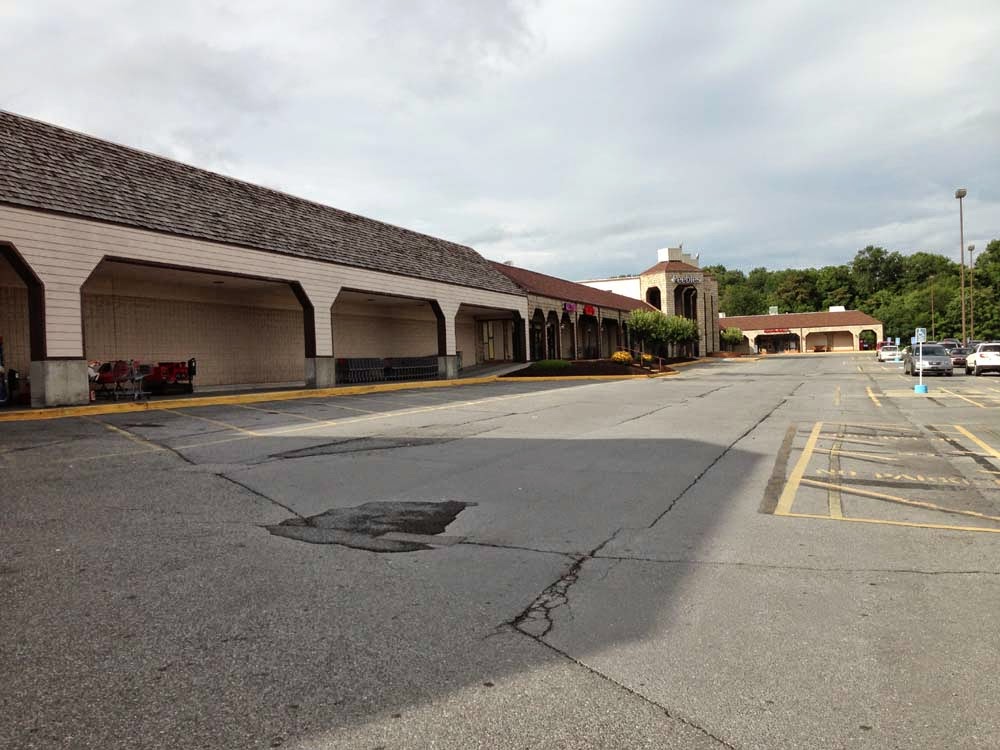 A look back east at the main mall entrance and adjacent strip portion. 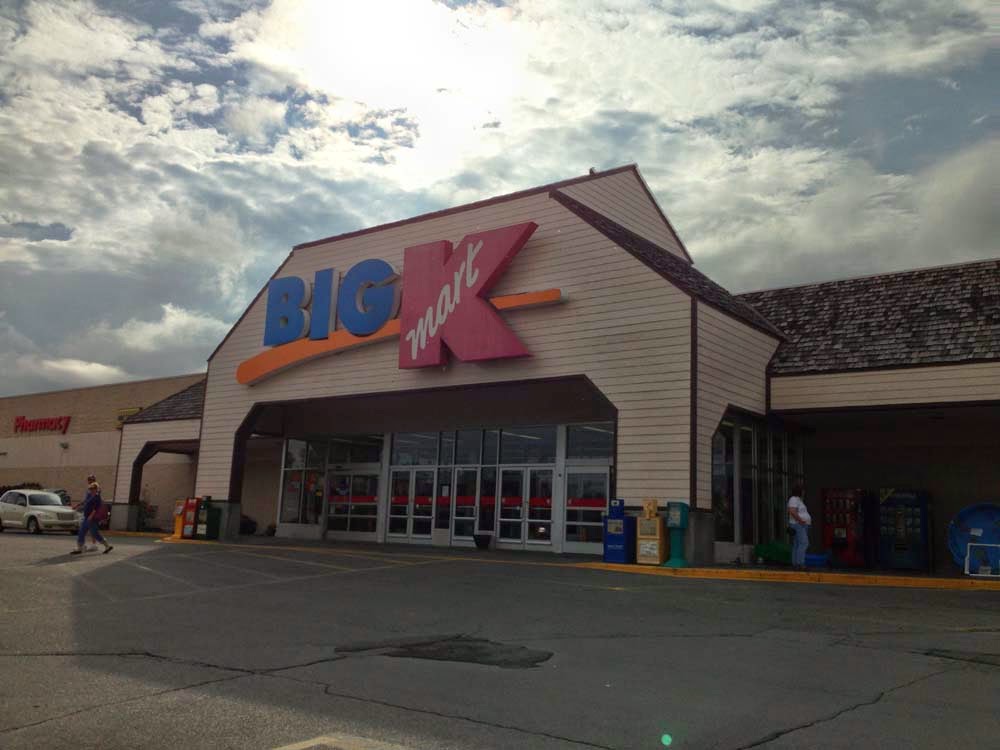 Kmart features a distinctive, special design for its exterior entrance vs. the typical Kmart of the era. 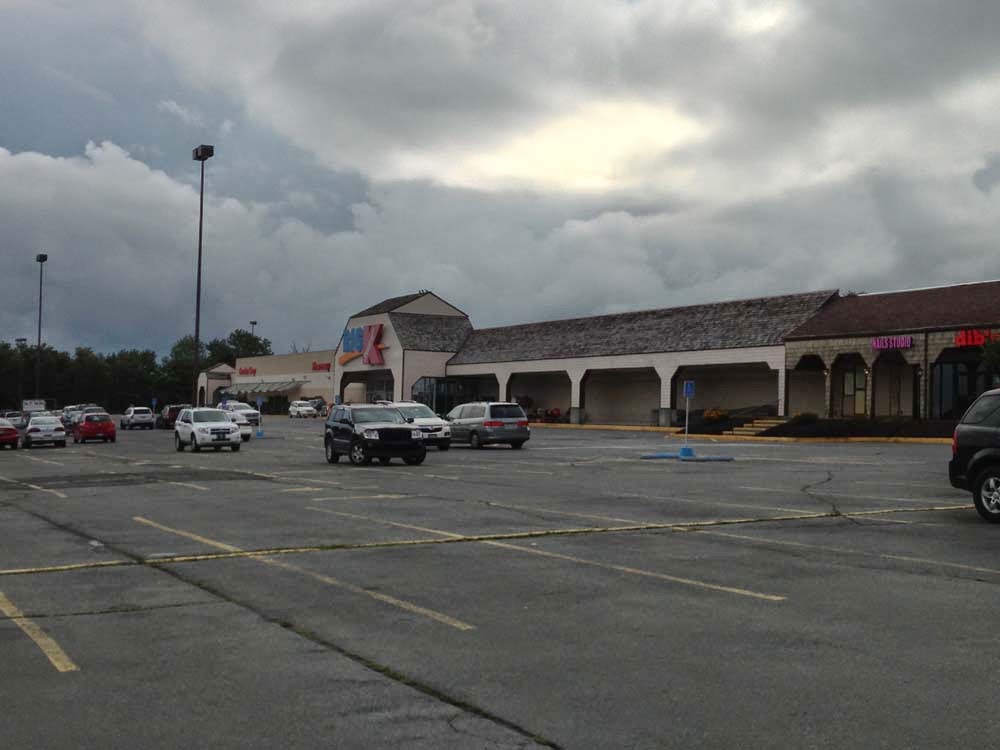 Overview of the Kmart, which opened in 1993 to replace Heck's/L.A. Joe. 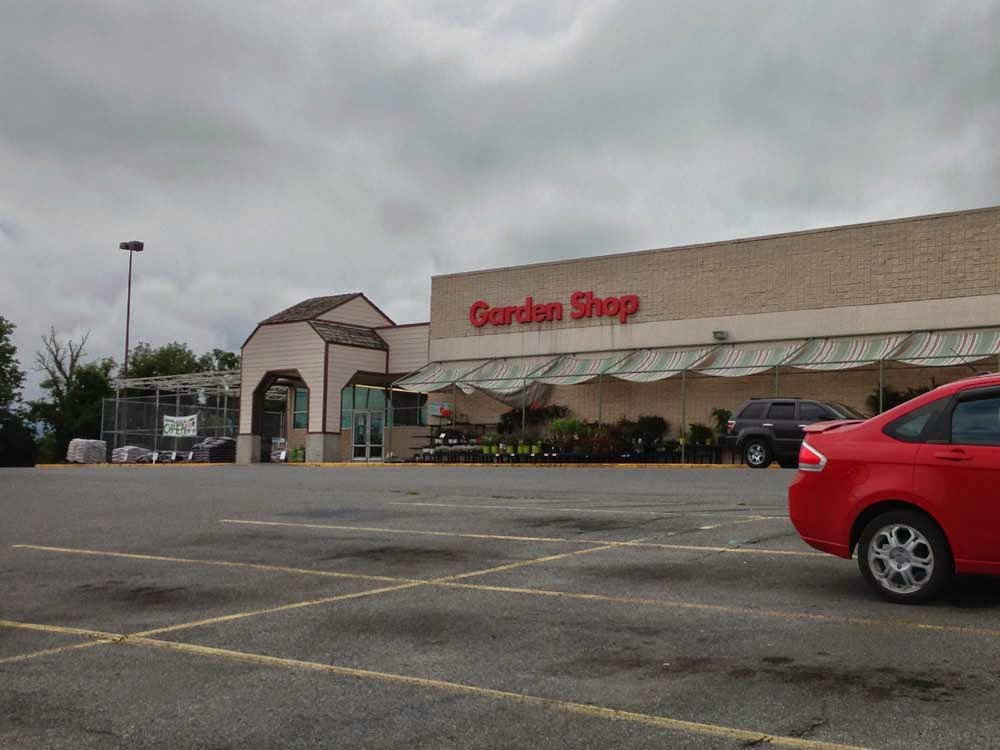 The distinct trim extends to the garden shop, which otherwise has the typical 90's Kmart exterior. 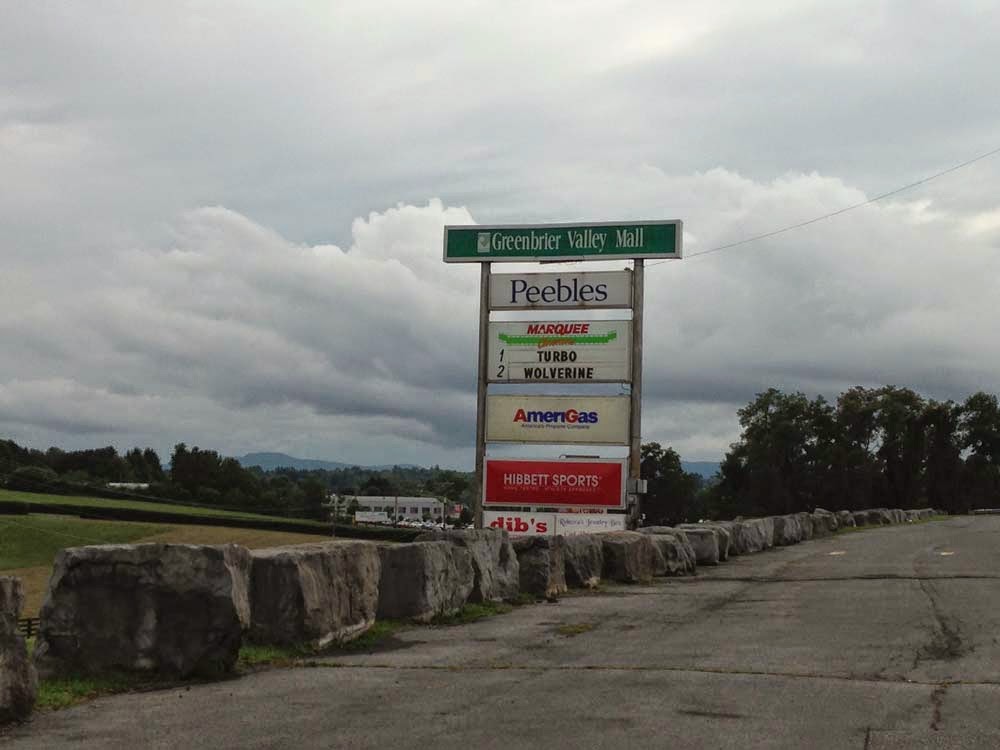 Limestone boulders line up along the edge of the parking lot where the mall fronts US 219.  It appears that a ton of limestone had to be moved to build the mall.  A rock bluff was directly behind the mall.

Otherwise, the future of Greenbrier Valley Mall as an enclosed mall looks pretty doubtful.  Aside from the anchors, the mall has no chain stores other than Hibbett Sports.  Almost everything else in the mall is local in nature, which suggests that the rents are too low to continue operating as a mall without Peebles, which currently absorbs much of the mall space.  The mall has never been remodeled since the day it opened, and spaces within the mall will be difficult to fill.  I expect that more than likely the mall portion of the center will be demolished converting the back half of the mall into an open-air strip center.  However, I can see that a small portion of the mall would likely be kept intact to provide access to the theater if the theater stays where it is.  Nevertheless, I would like to see Greenbrier Valley Mall stay just like it is.  It is a very unique mall architecturally, and it is attractive inside and out.  It fits well with the natural beauty of the area as well.  Because of this, I hope that this mall survives the bad economy and mall death epidemic and comes back stronger when the American economy eventually revives in the future.