Time constraints and lack of knowledge of the area led me to miss a few other retail opportunities in Jackson, but I did manage to photograph a couple places of interest.  What I missed was the dead Jackson Plaza "Mall", which is a former Zayre-anchored dual facing strip center, Market Street Flowood and Renaissance at Colony Park, all in some form or fashion a lifestyle center although the first predated the term.  What I managed to find, however, was the last McRae's flagship store in Flowood that now functions as Belk and the interesting and dated Deville Plaza along I-55 and Canton Mart Road. 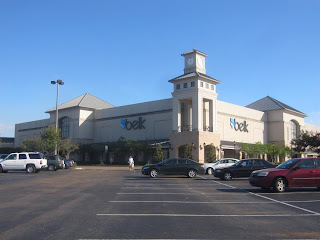 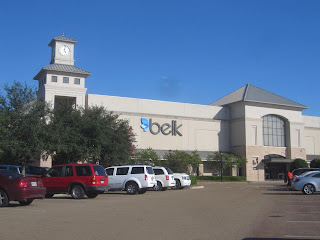 The distinctive Belk at Dogwood Festival Market in Flowood opened as McRae's flagship store in 2002.


The McRae's flagship at Dogwood Festival Market & Promenade is unique.  It did not open in either a mall or lifestyle center but instead a large power center (although it was marketed as a lifestyle center).  It is situated at a 45 degree angle to the rest of the strip to make it stand out with entrances on each side, and its beautiful design was designed by Dean and Dean/Associates Architects.  It opened on April 17, 2002 to celebrate the 100th Anniversary of McRae's, which unfortunately was sold out only three years later to Belk (1).  The store featured the signature blue logo of McRae's, and it continues to operate as Belk as part of a regional retail corridor that has built up around it that also includes Market Street Flowood (anchored by JCPenney). 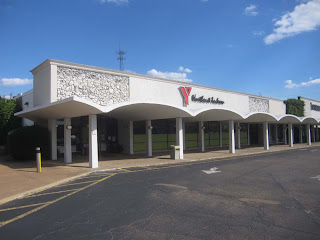 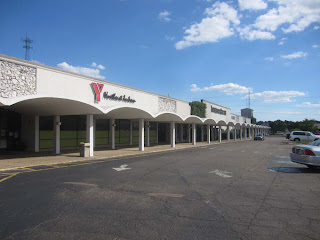 The old part of Deville Plaza was constructed in 1969 featuring stonework and scalloped canopies.  It is unknown what was in the original center. 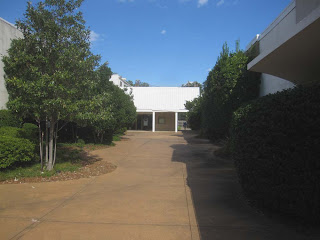 A now-closed theater anchors the middle of Deville Plaza with a long approach courtyard.  Sports & Co is to the left and the original strip is to the right.

Deville Plaza was first constructed in 1969 and expanded in 1973.  The main part with the scalloped arch design is clearly the original part of the center with the northern part added that now houses Stein Mart and Sport & Co.  Clearly this was a split anchor, and I am assuming that this was originally Service Merchandise or something similar though a department store was also possible originally such as Holmes that otherwise had no presence on the east side of the city before 1984.  The center also has a now-closed theater in between the main strip and the Stein Mart/Sport & Co building featuring an outdoor breezeway between the two buildings with no other tenants.  I have included here some photos of this interesting center that I would love to know more history on. 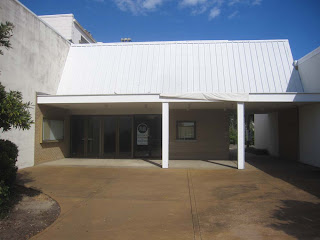 Close-up of the closed theater at Deville Plaza Shopping Center. A view of the underside of the scalloped concrete canopies at Deville Plaza. 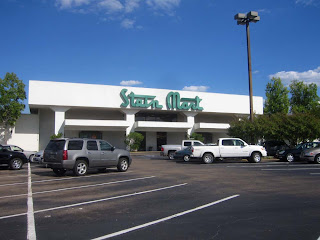 Anchor tenant Stein Mart is in a building constructed in 1973 believed to previously house Service Merchandise.  Sports & Co (not pictured) takes up the right side of the building.  Stein Mart originally started in Mississippi.

Perhaps in the future I can come back and cover some Jackson retail more in depth, but hopefully this covers the major retail points of interest in the area.  It will be interesting to see how this all evolves and changes since I believe that the restructuring of retail in the area is far from complete.