Hickory has well defined itself as the major retail center of the North Carolina foothills region, and Valley Hills Mall is the centerpiece of this.  The most upscale shopping to be found is in and around the mall, which arrived with a bang in 1978 and has been going strong ever since.  As Hickory's only active shopping mall, it left its former older competitor Catawba Mall in the dust over two decades ago.  Today, it is a solid two-level mall with four anchors and plenty of business. 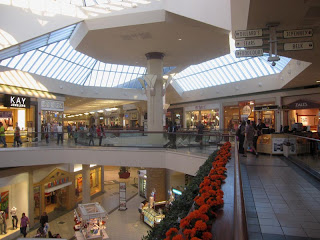 Valley Hills Mall is a curious mall in that it was apparently built on a narrow plot of land that required interesting design modifications.  The mall first opened as an L-shaped mall (or a "V" depending on how you see it) anchored only by Belk Broome and Sears.  Apparently Mr. Beery (of Belk Beery) built the store, but the ownership was transferred to the Broomes.  It did not seem at the time the mall was built that the owners were interesting in killing off their older nearby competition, though both malls shared a Belk.  However, it was pretty obvious by that time which mall had more to offer in size and architecture, and its name did not start with a C.


Valley Hills Mall grew into a dominant mall in the 1980's when JCPenney left its large two-level store at Catawba for a brand new store at Valley Hills in 1988.  At the same time, Belk consolidated its operations into Valley Hills ending any chance that the two malls would be complimenting each other at all.  At the time, no other mall in the region had Belk, Sears and JCPenney though the mall would have been more ideal with anchors like Ivey's or Thalhimer's, neither of which the city could apparently support at that time.  Spainhour's might have also joined the mall, but at the time they seemed to be looking more into phasing out their department store business.  It would still be another decade before the mall would attract a more upscale anchor tenant. 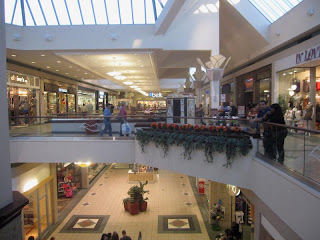 1999 would be the next and last major modification the mall would see.  It was in that year that the mall added two new wings.  One included a food court fronting a new main entrance to the mall on the north side between Belk and Sears.  The second was the addition of a longer wing for a new Dillard's store giving the mall a Z-shape.  Dillard's at the time was new to the market, so its arrival was likely exciting for mall patrons.  The then-aging mall also received an interior renovation, updated entrances and a new logo.  The improvements did not strip away all of the 70's features, but it made the mall seem less dated and sufficiently contemporary.

What does remain vintage at the mall is quite striking.  The skylight configuration through the older part of the mall is somewhat SouthPark inspired with its skylights along the sides instead of in the center.  The skylights, however, are placed at a 45 degree angle with the roof sloping back down on the opposite side.  Bigger, brighter skylights are found in center court.  Fake plants give the mall a more lush feel.  About the only thing that looks different is the Dillard's wing, which contains a less inspired, more conventional design.  What is also nice in the mall is the small terraced fountain in the lower level of center court.  This likely replaced a much grander fountain before, but it is still a nice feature that they did not have to install.  The mall as a whole is bright and cheery compared to the dark and plain Catawba Mall.  In all, it is a well-designed mall that is a step above the average small city mall.

Hickory today pulls from a large, although largely rural market.  Because of that, the mall will probably never attract more upscale stores or anchors, but for its market is still a far nicer mall than what cities of its size tend to have.  Because of that, the mall is fully leased and not likely to be crushed by a large power center or "lifestyle center" project.  In truth, it is even nice compared to other malls I have seen in the state, and its ownership by GGP makes it a first-tier mall.  My only beef with the mall is that its anchors look bland and boring.  Belk renovated away its stone-clad 70's elements, Sears has been upgraded to bleached-out blandness, Dillard's is the usual clone and only JCPenney really seems to stand out although still colorless.  The main issue the mall faces in the future is potential failure of 2-3 of its anchors.  Sears is on very shaky ground with JCPenney and Dillard's both known to be struggling as well.  Management will have to be creative if an unraveling occurs due to that issue.  Obviously, many other malls will have this problem but this is a very difficult challenge for malls in second tier markets with fewer stores to choose from.  If such a shake-up does not occur, this is a pretty standard, reasonably attractive mall that will likely avoid the worst of the current mall insurrection wiping out so many malls every year.
Posted by J.T. at 10:11 PM