My previous post discussed Houston Mall, the little hybrid strip mall/enclosed mall that eventually emptied out when another mall opened.  That other mall responsible for this exodus was Houston County Galleria, which opened to the west in the suburban town of Centerville.  Centerville is much like Warner-Robins in that it lacks a downtown, and part of that was that the city itself was not even established until the 1950's.  It is also similar in that it caters to the military crowd, thus displacing much of the businesses in Warner-Robins in the process.  Centerville is also an extremely fast growing area.  In fact, surrounding Houston County is one of the fastest growing places in the state.  Since the city has no central business district, the mall has essentially established itself as the downtown of the city since it opened in 1994. 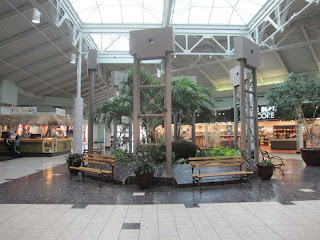 Houston County Galleria is not clearly named at all.  The sign on Watson Blvd reads simply "Galleria" and it is also referred to by others as "The Mall at Centerville" and "Houston Galleria".  The vague nature of the name is reflected in the owners, Zamias Realty.  The Pennsylvania-based company seems to be having difficulty managing its portfolio.  Despite the fact the mall is in a red hot retail corridor, the mall has enough vacancies that shoppers are genuinely concerned that it may, too, be a dying mall.  Personally, I'm wondering why it is having the trouble it is.  The only obvious answer I see is that it is a bit poorly located, situated a couple miles east of I-75 at the intersection of Watson Blvd (GA 247 Connector) and Houston Lake Road.  It is a reasonably attractive mall, and it has three solid anchors with Belk, JCPenney, Sears and a movie theater.  Of course, the same can be said for a mall I covered in Cleveland, TN that seems to be having issues of its own.  Perhaps it is just the curse of the 90's mall? 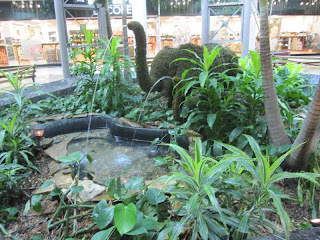 The first photo shows the east court, which is the most attractive part of the mall.  Inside is a tropical planter with this rather unusual fountain with water exiting an elephant's trunk shown in the second pic. 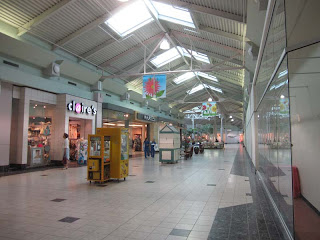 A stroll down the east wing from Belk.  The design of the ceiling reminds me of the inside of an airplane hangar.  Is this deliberate to pay tribute to Robins ARB? 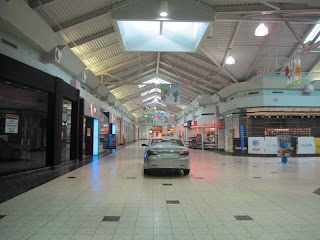 A look at the mall just outside of Sears.  Note the hit and miss open stores. 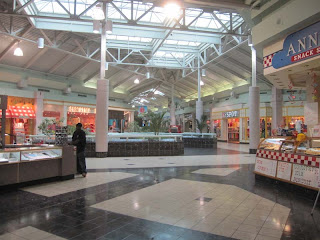 The center of the mall features a pseudo food court, but only one national chain restaurant can be found in it...Chick-Fil-A.  In the background is a sunken area with planters that apparently is just there for looks...it is fenced off. 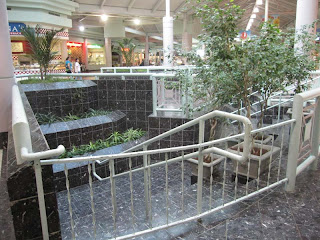 Looking down into part of the sunken area.  Very nice, but what purpose does it serve?

What really stands out to me is why is this mall not thriving or at least improving considering what is going on at Macon Mall.  For years, the mall has played second fiddle to the monstrosity to the north but Macon Mall is indeed a troubled mall.  It seems that the lost business from there would translate into bigger business for the Galleria.  They could even lure Macy's to the mall if Macon Mall continues to struggle like it has been.  I guess the main problem, though, is that being a military town it is likely more difficult to attract the upscale shops.  Most of those have gone to North Macon along with all the money since The Shoppes at River Crossing opened.  It is not that Galleria lacks chain stores...it has stores such as American Eagle and Victoria's Secret...but it could definitely offer a lot more in the trendy chain store department.  I also thought the mall could have had far better lighting.  It seemed a bit dreary. 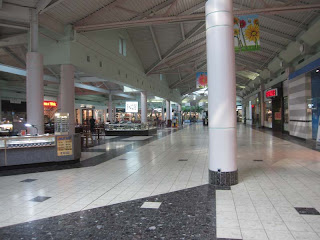 Another look in the center area with the "food court" on the left.  This is definitely not an award-winning shot with that pole in view. 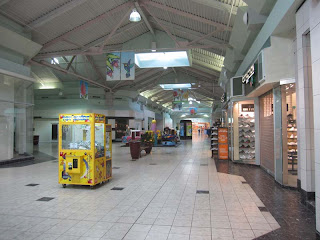 Here, I am walking back toward Belk. 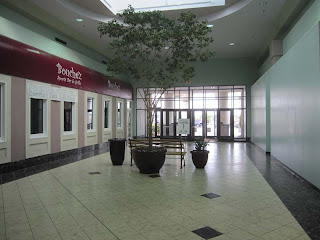 A side entrance corridor comes off to the side past the east court.  Not much of interest here really. 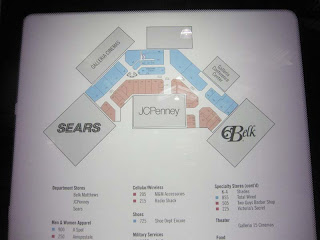 The mall does have an interesting layout, which resulted in there being two JCPenney mall entrances.  I did not photograph the lower one.  Note the top empty anchor.  There is nothing there other than an outside entrance, because that is a planned future anchor.  Goody's was between that and Belk.

The mall also seemed to have problems from the beginning.  According to KA Turner, construction was started as early as 1990, but the site sat idle due to Zamias being unable to finance completion of the mall.  A steel skeleton was beginning to rust in the middle of Centerville for quite awhile until funds were finally secured to complete the finish the mall a couple years later.  Regardless, the mall was still far more attractive than Houston Mall with its detailed vaulted ceilings, elaborate court areas and completely contemporary 90's design.  I wonder if perhaps the local shoppers were not pleased about what this mall did to Houston Mall. 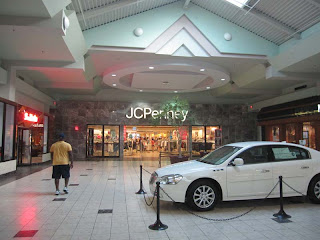 The main JCPenney mall entrance from the center of the mall.  Note "Le Nails" on the left...the only business to also have a location at Houston Mall. 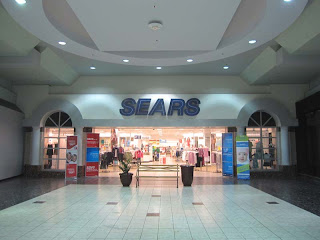 The Sears mall entrance is quite different.  I like it! 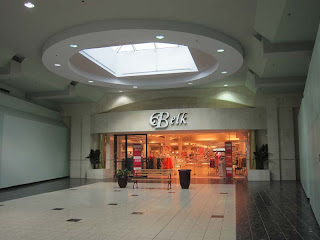 Belk mall entrance.  You can make out where the holes were covered up where this previously read Belk Matthews. 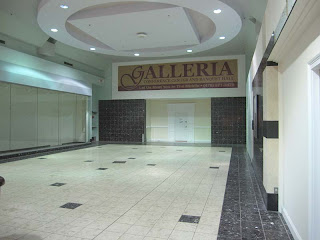 Goody's former mall entrance flanks the most dead corner of the mall.  I think the big banner is there more to remind you something is there, because I doesn't look to be accessible from the inside. 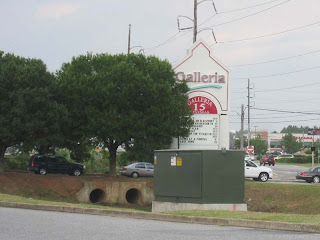 The website says "Houston County Galleria".  The sign on the highway, however, just says Galleria.  Personally, I'd rather it just be called "The Mall at Centerville".

Galleria was built with room for six anchors despite the fact the mall is not particularly large.  Four anchors opened with the mall, however, including Belk Matthews, Sears, JCPenney and Goody's...all but JCPenney stolen from Houston Mall.  A 15 screen movie theater took the fifth anchor leaving one empty spot in the back side of the mall that is yet to be filled.  Goody's has also since left the mall after closing in 2009 with the chain, and Stage Stores has not shown interest in replacing that location.  The owners instead made the Goody's into a new conference center.  It seems doubtful the sixth anchor will ever be filled, though anything is possible.  For any expansion, though, the mall will need to become a better regional draw. 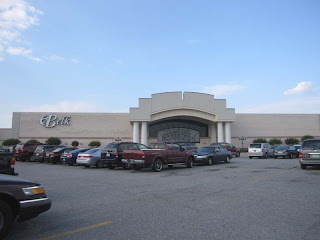 When Belk Matthews became Belk, only the Matthews part was removed.  The sign was not repositioned or changed otherwise.  This is really kind of a neat looking store inside and out. 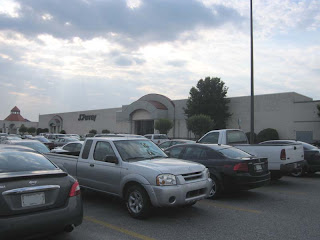 JCPenney is the keystone anchor dead center.  It is obviously a very successful location. 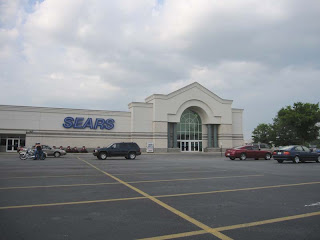 The Sears is a one-level clone of the store at North Point Mall in Alpharetta, GA.  It is also equally nice inside. 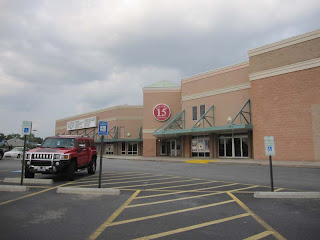 The theater complex looks very 90's.  Unfortunately, it is configured outside the mall so it adds no traffic to the interior despite the fact a sign is inside at what would be the mall entrance reminding people it is there. 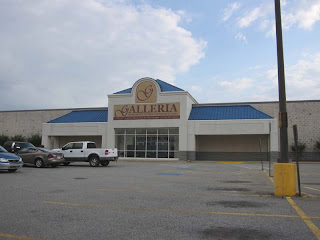 A look here at the former Goody's.  Maybe this should be converted to mall space.

Today, the strength of Galleria seems to be in the anchors.  Belk was very busy when I visited as well as JCPenney, both filling much of the parking lot.  A stroll through the mall, however, revealed somewhat of a dearth of shoppers.  If nothing else, I feel the mall could use somewhat of an update as well as different owners who could market this place better.  I know some of the criticism could be placed on the fact that the whole Macon region is simply over-retailed, but a mall has been on Watson Blvd since 1971 so the location is well established otherwise.  However, it should be noted that Houston Mall was much smaller and built before the retail explosion along the corridor.  Overall, this was a decent looking mall, and I felt this mall had much going for it.  This is why I want to know why the mall itself is not thriving. 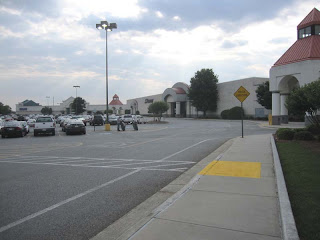