The South is littered with tiny malls that probably should never have been built.  They are usually isolated enough in small cities that they really do not do very well, but offer enough to the community to linger.  Usually, the mall opened in better times before the city's main industrial base declined and retail outside of downtown was not yet established.  Nearby, there might have been a grocery store, but nothing that could really compete with the mall.   Eventually, as the suburban retail offerings in the city expand, and the base of shopping dwindles due to the local economy, the mall either drifts to alternative uses or outright fails.  Stores that remain in the mall begin to vacate to nearby strip centers.  Better stores in nearby larger cities also begin to move closer to the mall's market area chipping away at any market share it might have had.  This is because growth in the area was too stagnant to insulate the mall when this occurred.  In the case of Eden, probably all of this applied. 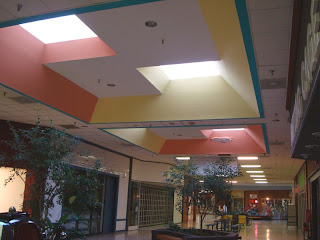 The town of Eden itself has a strange history as the consolidation of three separate towns in 1967 known as Leaksville, Spray and Draper.  The town got its name from its origin as a large estate that existed in the 1700's that was also named Eden.  Today it is a city with nearly 16,000 residents: a population not adequate for much more than a Wal-Mart and a couple grocery stores.  Add to this that better shopping is available close by across the state line in Danville, Virginia.  Additionally, the larger municipalities of the Piedmont Triad to the southwest offer a broader range of choices that have grown increasingly upscale.  Thrown all together, the mall was destined to fail from the very beginning.


Eden Mall's origins dated to 1980 when the mall first opened.  With its disco-themed appearance, the mall sported anchors Belk Cline, Kmart and Globman's, a Martinsville, Va. based store.  Belk is located on the west end of the mall, Globman's was on the north end and Kmart on the east end.  The first few years were most likely also its most successful as well.  The mall joined an enormous boom in mall construction in smaller cities that came on the heels of phenomenal success for malls in larger cities.  In North Carolina, Belk was heavily influential in this boom of small town shopping malls as they attempted to upscale their image, market share and offerings.


The mall's fortunes came into question by the early 1990's.  With a high vacancy rate, the mall was also in a time warp.  By this time, national chain retailers within the mall started to flee.  First, Globman's closed at the mall, but the store was then immediately filled by Peeble's.  The worst hit came, however, when major anchor Kmart closed at the mall.  The closing of the store was also not part of the later restructuring, but came much earlier when it shut down at the mall in 1994 when Kmart was still truly competitive with Wal-Mart and the discount store market had more players.  By this point, the mall was already being re-purposed as a haven for non-traditional tenants.  This was a move made by many of the ailing shopping malls in that era before the building boom of the 2000's resulted in the demolition of many of these failing malls.  Eden Mall, however, did not enjoy the building boom that gripped the larger cities of the South, thus it managed to survive in its diminished capacity.

Today, Eden Mall is in the twilight zone.  The mall is effectively dead with no chain store operations at all except for Belk.  Almost the entire mall is made up of small shops and offices filling less than 50 percent of the empty shops, and the mall is in near disrepair never having received a single renovation since the day it opened 31 years ago.  Curiously, however, Belk hangs on at the mall.  I assume that Belk just has not found a strip shopping center to anchor onto.  Peeble's did, however, relocating to Kingsway Plaza in 2008.  Belk, however, simply snubs the mall having sealed off their mall entrance since Peeble's fled to higher ground.  The Belk store itself looks as old as the mall, but even then it still got the new sign treatment with the blue flower and loopy letters: even on the mall entrance.


The mall today hangs on with obviously the bare minimum for upkeep.  New uses have been rather creative, however, such as the events center situated in the former Globman's/Peeble's store.  What once sold blouses and perfume recently hosted a wrestling match.  A DMV office also draws frowning traffic into the mall, and "Eden Business Center" seems to be an odd hybrid of Mail Boxes, Etc., a sweepstakes portal and internet cafe.  DMV offices seem to be a good fit for dead malls considering at least two other malls I covered had them.  Still, with the many dead malls I have covered, this one may possibly rate as one of the trashiest, most forgotten and most forlorn malls ever to still have the lights on.

Judging by the appearance of the mall, the days for this mall may have been prolonged about 15 years or so, but its days are numbered at least as a public retail operation.  With Belk being the last legitimate retailer, it does absolutely nothing for the rest of the mall.  I believe they will eventually relocate if given the chance, but they may have to build their own store considering the complete lack of new shopping centers in the area.  Why that has not already happened I cannot figure out.  Once Belk goes, I expect the mall will probably close.  What will take its place is anyone's guess.  I am sure that it could function well as a school, church, medical center, corporate offices or government multimodal facility.  It could also sit empty until it deteriorates beyond repair as well.


Eden Mall pretty much can be summed up by the average person to be a total economic loss and a complete dump.  The Biblical Eden probably was as well after it's two most famous residents were evicted.  For modern history buffs and retail enthusiasts, however, this mall is amazing.  The chance of finding any well-preserved, largely unmodified 1980 shopping mall in 2011 is remote, but they do exist if you know where to look.  I personally have not yet had the chance to visit this mall, but I hope to see it one day to get a few pics of my own.  I might not have even known about it had I not been tipped-off about it, but thanks to digitalsky here I have this excellent collection of photos of a mall that clearly has seen better days.