Back in 2003, a site was created called Kingsport.org that was a spoof of those gimmicky chamber of commerce websites.  The site was indeed hilarious, but it was very very harsh on this mountain city effectively enraging the city leaders, chamber of commerce and likely miffing much of the local populace who were being painted in a less than rosy picture.  To this day, I am wondering what motivated the webmaster of that site who featured, for example, a snarling possum as "local fauna".  It seems like he was getting even with the town for something.  While the site no longer exists, the site featured Kingsport Mall.  Why did they feature it?  To effectively trash the local retail scene as dead, backwards and ugly.  What the webmasters did, however, was actuality give us a rare glimpse into a well-preserved dead mall that opened in September 1970.  Unfortunately, I have only been able to save a couple photos of the mall, which was demolished for a strip mall known as East Stone Commons in 2002.  I attempted to contact the original webmasters of Kingsport.org to no avail. 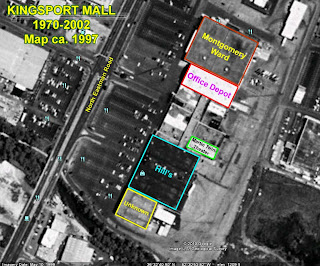 When Kingsport Mall opened, the mall featured a classic T shape with two anchors: Montgomery Ward and Hill's discount department store.  Also included in the mall were the Martin Twin Theaters, which provided mall patrons a way to kick back after shopping.  The mall featured plain decor, lots of glass, brick, shiny metal and clean lines, which were common in malls built into the early 70's.  It still seemed adequate considering that The Miracle Mall in Johnson City was built on an even smaller, plainer plan though the Johnson City mall had the distinct advantage of better luck and better anchors.  In all honesty, it seemed like a cozy yet largely boring shopping experience especially after Fort Henry Mall opened. 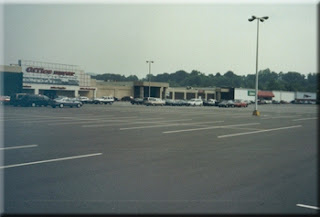 This is the first of several photos I saved from the archives that were posted on Kingsport.org.  In this photo, you see Office Depot, which still exists unchanged, the min mall entrance and Ames in the background.  I cannot tell what store is beyond it, though it appears to be a drug store or dollar store.  The first image with the map of the mall says "unknown" for the last store.  I also suspect a Woolworth or McCrory's was next to the Martin Twin Theaters.  Photo from Kingsport.org.
Kingsport Mall never got much of a chance to soar.  Judging by the design, exterior sign and anchor positioning it looks like the mall is unmistakably similar and probably built by the same people as abandoned Lexington Mall in Lexington, KY. It was built way too small when it opened with a terrible anchor line-up, but such simple floorplans were unfortunately typical for the period.   I assume that in 1970 that the downtown stores did not want to invest into the mall, but only five years later they would all bound across town to Fort Henry Mall, which seemed terribly unfair.  Kingsport was dwarfed, but it was in a good location with anchors that had no intentions of leaving, which made it a decent ancillary mall into the 1980's. 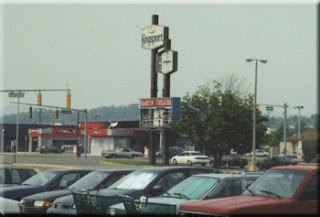 The Kingsport Mall sign has a gothic look, but the overall design is IDENTICAL to the Lexington Mall sign in the link above.  What was taken off the other hexagon sign?  Note Martin Theaters at the bottom.  It looked really hot the day those were taken.  God, I love this sign!  Photo from Kingsport.org. 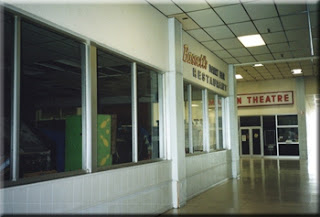 This looks to be the mall entrance adjacent to Hill's/Ames from the front.  Bassett's Dairy Bar looks to be a local establishment that figured out that no matter how low the rent that a mall with no customers is a poor business model.  Note the Martin Theater in the background.  I recall Martin Theaters owners sent a nasty letter to the owners of Kingsport.org who claimed the theater was out of business at the time, but I wasn't there.  The owners published it proudly.  I guess it was easy to bash the dead mall in town back in the 90's when you thought they would always be there.  Photo here from...Kingsport.org.
The fact that Kingsport Mall held on as long as it did was pretty amazing.  Montgomery Ward, however, was pretty well stuck considering that Fort Henry Mall opened with both Sears and JCPenney despite the built-in anchor pad for a fifth anchor.  Five anchors back then was unheard of anyway.  Hill's was also reasonably successful until the early 1990's when the chain declined and sold out to Ames in 1998, which itself folded in 2000.  Montgomery Ward also lost its way in the same time span, so an aging dinosaur mall was likewise laden with two dinosaur anchors.  Montgomery Ward itself would last until the chain folded in 2000.  By 2001, the mall was effectively dead other than Office Depot.  Even before both anchors emptied out, the mall had never been updated and looked yellowed and decrepit after nearly 30 years of business.  Most inline stores had closed or moved out by then, and the owners apparently attempted to gradually convert the interior into a strip mall.  Office Max itself was squeezed into the northern portion of the mall cutting off the Wards former mall entrance from the rest of the mall.  The result was that the remaining mall was even smaller and more dead than before, thus becoming fodder for the Kingsport.org mockery of the mall as a "shopping mecca". 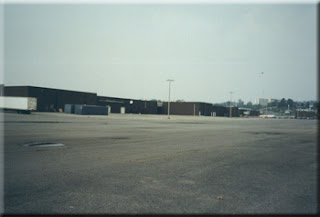 I believe this was taken along the back side of the mall, and this shows part of the old Montgomery Ward.  The better pictures did not seem to be available.  If anybody saved the photos from this site when it existed, please send them my way!  Photo from Kingsport.org. 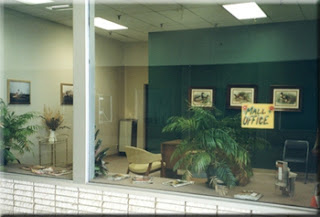 The mall office actually looks pretty sharp for a dead mall never mind it is obviously filling space of a former actual store.  The homemade "Mall Office" sign, however, suggests that the management is out to lunch 6 out of 8 hours daily and that you better call ahead if you want to talk to them about leasing in the mall where one of the two parties will be laughing after the meeting adjourns.  Of course, that is if, first, you don't just get the recording that informs you your call will never be returned.  Photo from Kingsport.org.
Apparently Kingsport's crowning as a "shopping mecca" took an ironic twist after the mall was demolished in 2002.  Only the original Montgomery Ward building remains, which is now split into Hobby Lobby and a row of small tenants along the former northern outside entrance.  Office Depot, however, remained unchanged through the redevelopment other than small tenants tacked to the right side of it much like what happened to the old Montgomery Ward. Converted to a strip mall, this indeed brought new excitement to a long dead corner bringing in big box stores including Ross Dress For Less, TJ Maxx, and PetSmart.  Smaller tenants were also built onto each side of the old Montgomery Ward building and along outparcels that numbered closely to what the mall once offered.  Locals today even claim that the new East Stone Commons is more successful than Fort Henry Mall.  The center today is fading somewhat, but still far more popular than the old Kingsport Mall ever was, and the redeveloped mall did indeed become a "shopping mecca".  With Fort Henry Mall to the south and massive new development to the east, the mall's already excellent and central location for the city's suburban shopping district is a big part in why it is doing well today.  Now, if only they would purchase the land behind it to tack on a new mall addition into the existing redeveloped strip...
Posted by J.T. at 6:00 AM