An accurate description of Hillcrest Mall is that it is a mall that never should have been built. What details exist of this mall online up to now are quite inaccurate, but looking through old newspaper articles should clear up the confusion. Basically, Hillcrest Mall started out as Hillcrest Shopping Center, which opened as strip mall in 1956 anchored by a mere three tenants: Community Cash, Smith-Ouzts Drugs and Hall Hardware. It was just an early strip mall with no department stores and not even a grocery store, but it continued to expand over the next decade. It has always been very successful as a strip mall as well, but its later mall expansion could hardly share that claim of success. With that, Hillcrest was definitely not the first mall in Spartanburg, but it definitely was the first strip shopping center.

Aerial shot of original Hillcrest Shopping Center in Spartanburg after a new expansion in 1964.

The first change at Hillcrest Shopping Center came in 1964. This was when a new A&P Grocery store was added to the strip as well as a Lambert's variety store. Other tenants in the 1964 shopping center included Amelia Anne Gifts, Hillcrest Styling Salon, The Cobbler Shop, Crestmont Restaurant, Smith-Ouzts Drugs, The Carousel Shop, Hillcrest Coin-Operated Laundry, Wallace Hunt Furniture, Jennings Shoes, the Barn, Friendship Room (group meeting place), Hlllcrest Barber Shop, Cambridge House, The Pastry Shop, Ellis Clothes of Distinction and Community Cash. Community Cash and Smith-Ouzts Drugs remained through the expansion. A couple other listed tenants were part of the new expansion. The biggest change to date, however, came in 1965. This is when a new Belk Hudson opened at the center, bringing a legitimate department store to the shopping center nearly 10 years after its construction. This store was added onto the north end of the strip, which created the first suburban location for Belk Hudson in the city.

Belk Hudson at Hillcrest Shopping Center prior to opening in 1965.  This was the only department store found in the original strip center, located on the end of the shopping center.  It was built after the last photo, but it would be located at the top if so.

South Carolina as a whole was slow to catch on to the mall craze. Richland in Columbia was probably the very first mall, but it was not until 1968 that Greenville opened the state's very first enclosed mall with McAlister Square.  While most cities of any size had a mall by 1965, Spartanburg had no mall even though I-85 was already built in the city. In fact, no mall of any kind existed in the city until 1975 when Westgate opened. Westgate featuring another Belk Hudson and Meyers-Arnold, which was based downtown. Although the two Belk stores overlapped, the two shopping centers co-existed peacefully. One was a mall, and the other was just a regular strip shopping center. Basically, you would buy groceries at Hillcrest and do your big shopping at Westgate, right? Wrong.

Jim Wilson & Associates, who had previously built many smaller malls including Jessamine Mall in Sumter, changed the plan for Hillcrest in the early 80's. Apparently Ivey's was looking for a store in the city, and Belk Hudson obviously needed a boost at the center. This was not a traditional mall in any sense. Instead, it was a mall appendage onto the existing shopping center. This new mall would be built leaving all of the existing shopping center in place, renovating the Belk Hudson and giving Ivey's a mall to be attached to in lieu of simply opening a store at Westgate Mall. 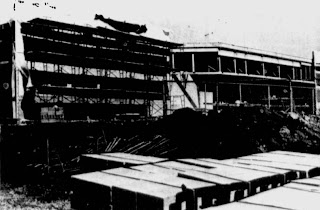 Ivey's under construction at Hillcrest in 1982.

Astoundingly, the major reason that Jim Wilson gave for building a mall on the undeveloped part of the site was that his daughter was in college in the area and "[He] was looking for a reason to come up and see her more often." [1] Huh? I understood he missed his daughter, but couldn't he have just built a Richway there or something? Unfortunately, this kind of logic applied often in ill-fated, poorly researched mall projects in the 70's, 80's and early 90's, which is the biggest catalyst behind the dead mall phenomenon today.  Market research and careful planning are incorporated much more in large scale retail projects today even though some still charge ahead without any thought.

Opening day comes on August 12, 1982. Dignitaries arrive to celebrate a mall that has a mere 110,000 square feet with 29 stores. If this had been built in 1965, it would have been worthy of a governor's visit, but why build this in 1982 when there is already another mall? Ivey's opened with 60,000 square feet of space to add to the mall, and the existing Belk brought the entire mall portion to little over 200,000 square feet. The mall was also built with the idea of expansion to a third anchor, which was promised but never materialized. The rest of the older strip shopping center was unaffected by the new mall except maybe in increased business. The mall itself was single level with breaks built in to deal with the sloping terrain it was built on. Inside were typical early 80's trappings such as planters and earthtones, though the mall did have skylights. 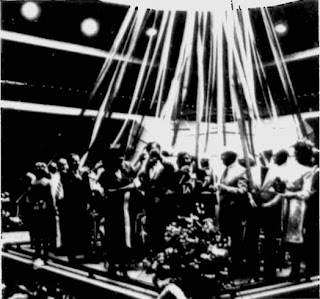 Ribbon cutting at Hillcrest Mall in 1982.  This is apparently center court, though it is difficult to tell.

Tenants in the new mall were not exactly those desired in a first-tier shopping mall. While chains such as Casual Corner, Waldenbooks, Hallmark, Radio Shack, GNC, Morrison's Cafeteria and Baskin Robbins were found in the new mall, most tenants when the mall opened were small locally-operated tenants. These "specialty shops" filled a mall when they were new, but they meant that the mall was a flop from the start. Unfortunately, the retail graveyard is full of small niche malls, and Ivey's here was definitely the niche that held it together.


Now, fast forward to 1992. Owners already admit the mall is having vacancy problems, and less than 65 percent of the mall is leased even with anchors Belk and Dillard's. Dillard's has since replaced Ivey's, which was bought out in 1990. The buyout made people in the city very nervous noting that Dillard's was not exactly pleased with a smaller than usual store in a less than conventional mall in a new market, and Westgate was courting stores like Dillard's in a planned expansion. Even worse, the undersized mall in a less than ideal location was bleeding tenants. Chains stores in the mall were bailing out, while existing tenants were mad and the owners worried. [2] 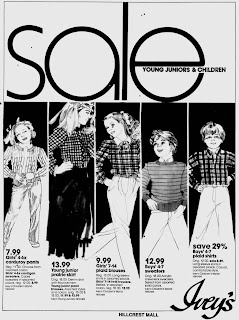 In April 1995, the mall owners' worst fears were realized. Dillard's announced they were constructing a new store at Westgate Mall in an expansion, subsequently closing the Hillcrest store. After the new store was completed, Dillard's closed at Hillcrest in February 1997. At that point, all hope was lost for the long-struggling mall. Westgate was not doing this, though, just to do Hillcrest in. It was about survival. Rouse Company threatened Westgate's own well-being by planning its own huge regional mall anchored by White's, Dillard's and they were in talks with Rich's as well: long a coveted anchor in the city. Westgate's expansion was done to make sure that would not happen, but Hillcrest had to pay the price. [3] After Dillard's closed, the reason for the mall existing was over. Belk was cannibalizing its own sales operating stores at both malls, and in December 1997 Belk closed its older location at the mall after 32 years of operation. 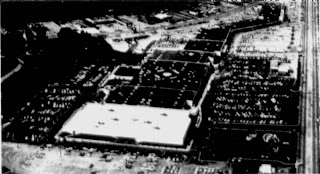 Aerial shot of Hillcrest Mall on opening day.  This was the busiest the mall parking lot would likely ever be.  The new Ivey's store is in the foreground while the old strip mall is in the background on the other side of Belk Hudson.  This is all looking southwest.  The mall lasted a mere 16 years.

When Hillcrest failed, the owners wasted no time demolishing the mall. In June 1998, the last two tenants were kicked out and the mall closed. Demolition began on the mall in late summer 1998 and was completed late in the fall that year. In lieu of a mall, a new Super Kmart, Publix, movie theater and Stein Mart was constructed on the site. Hillcrest Mall lasted a mere 16 years, while Hillcrest Shopping Center was over 40 years old. Instead of a mall, Kmart should have been built there to start with.

Today, Hillcrest Shopping Center is a center full of big box tenants. While the offerings are more of the national chain variety, it has never faded. Kmart eventually closed, but the store was subdivided into Petco, Office Depot and Ross Dress For Less. However, Publix and Stein Mart continue to operate at the redeveloped center. Publix sits today where Belk Hudson was previously. The old A&P has also since been subdivided into smaller spaces. While the original strip is definitely showing some vacancies, it is doing very well considering it is Spartanburg's oldest shopping center.  Hillcrest indeed came full circle after 54 years, and it has withstood the test of time and a peculiar mall addition that proved not to be a wise move.  The stores are different, the look is different but Hillcrest is still there.