Columbia once had an astounding number of enclosed malls for a city of its size: seven total malls.  Of course, three of these malls were not malls in any form of the traditional sense.  These three were all tiny one-level malls built around discount chain Richway, which is why I dub these malls "Richway Malls".  Richway Malls were indeed small, only containing about 15-20 stores including a movie theater.  They were all excellent concepts in their time, but the fickle big box nature of them left them obsolete.  Charlotte had three Richway Malls as well, and Atlanta had one.  Decker Mall is not unique in the Richway Malls group except in one aspect: it is the last one of the three still standing and operational.  In fact, a visit to this mall was a trip back to the late 1970's, so those of you hoping to find an unmodified 70's mall still operational will not be disappointed.  I definitely was not either. 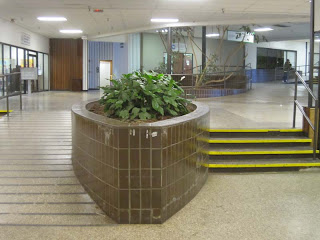 Decker Mall opened in 1977 with anchors Richway, Kroger Sav-On and a theater.  Its location is on Decker Blvd just east of Two Notch Road.  Columbia Place Mall, originally anchored by Richway's parent company Rich's, is less than a mile away, and both opened almost simultaneously.  While Columbia Place is a major regional mall, Decker is a very tiny and simple mall that blends in architecturally with the former Richway.  What architecture is on the mall is a very rounded, dated and extreme 70's modern, however.  The former Richway, of course, has the famous wedge skylights as well, though the design of the store is less boxy than its Georgia counterparts were. 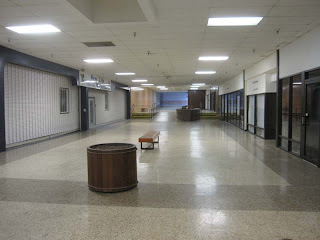 A look along the Richway/Target wing.  The first photo was one of the ramps in center court with detail of the old brown linoleum tiles around the planter. 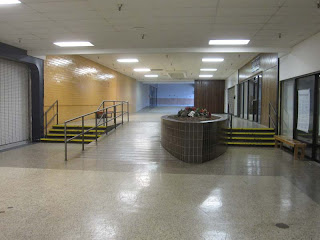 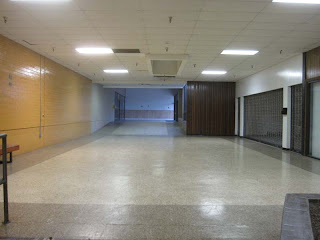 Approaching Richway/Target.  Strangely, the orange wall on the left is a relic left over from Richway.  Target never bothered to paint this over to match their store, suggesting that this mall was not at all important to their store.  A similar orange-painted wall like this was found at the side of Richway at Roswell Mall. 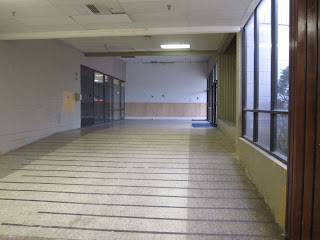 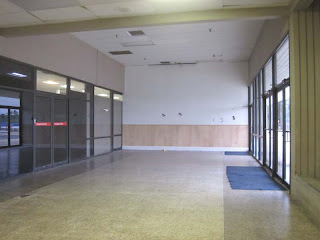 A look at the Richway mall entrance area.  It appears that part of the entrance was actually walled over to eliminate the connection to the mall.  The door on the left was an emergency exit.  The design was apparently to funnel shoppers to the same front door used by the store so that there was a mall entrance without multiple entrances.
Decker Mall opened at almost the same time as Bush River Mall across the city.  Like Decker, the anchor lineup of Bush River was identical, and Bush River was also a clone to Decker in every way.  A visit to Bush River Mall was essentially the same as a visit to Decker Mall, so with this post I am roughly giving you Bush River Mall as well.  Bush River Mall, however, fell on extremely hard times later in its life and no longer exists.  The third Richway Mall, Woodhill Mall, was somewhat different because it lacked the Kroger Sav-On, instead anchored by Tapp's.  I understand, however, that it was otherwise identical to Decker and Bush River. 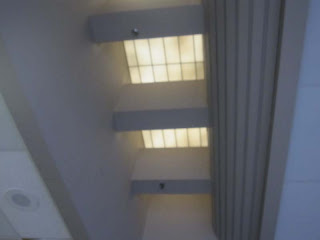 My one attempt at detail of the skylights.  It's very spooky looking. 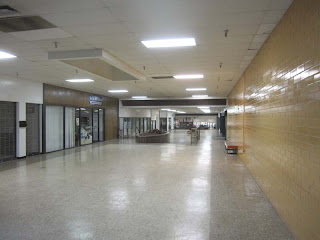 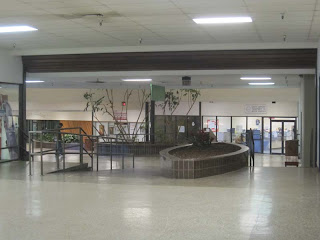 Walking back down the Richway wing with the latter photo showing center court and its subsequent sharp left turn and ramp down.  The store ahead is the DMV office.
Decker Mall was not a mall I remembered in Columbia.  I also did not really remember much about replica Bush River except the view from Bush River Road.  Nevertheless, I went to it several times and was amazed I never remembered it as a mall.  In fact, all I remembered about Bush River Mall was the Richway, yet I am sure that I went to some stores within the mall at some time and seem to vaguely recall walking up a ramp toward Richway.  It seemed the Richway at Bush River complete with its big sunrise logo sign and Cinema sign on the highway stood out very strikingly to me at 6.  That sunrise, of course, was replaced with the Gold Circle "G" just after I moved away before being sold to Target in 1988.  Gold Circle, owned by Federated Department Stores who also owned Richway, replaced Richway in all the Columbia Richway Malls in 1987 and 1988.  The only other thing I noted at Decker Mall different from Bush River is that the word "MALL" was prominent in red letters on the Bush River location next to Richway, while no prominent signage was noted anywhere at Decker Mall, including along Decker Blvd.  Maybe that was removed. 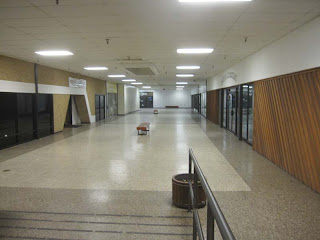 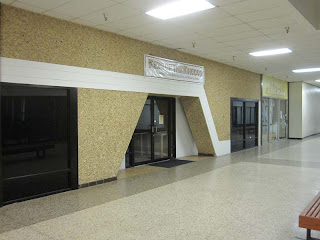 Now, I'm walking down the Kroger wing with the goofy designed place on the left, which I later realized was the former theater.  I think this was either a twin or triple screen theater, but definitely before the stadium seating era.  I absolutely dig the "space age" design even though it's tacky.
Decker Mall today is no longer a retail destination and to all appearances is at the end of its life, but mysteriously it hangs on due to the presence of a few key non-traditional tenants in addition to the general decline of the Decker Blvd area it is located.  Why that decline is significant is because it attracts more locally operated businesses and attractive lease terms, when such places would likely not locate there in a different area.  In fact, the mall is actually over 50% occupied!  At some point, Target closed and left the mall, most likely around 1999 much like what happened at Bush River.  Kroger Sav-On looks to have also left the mall for about as long as Target.  Today, Arcadia Storage, an air-conditioned storage facility took over the old Richway location along with the few retail and non-retail tenants operating in Decker Mall including the local DMV office, which is of course a major draw, and a church which operates in the old theater.  The mall is old, rough around the edges, dingy, but amazingly had no signs of roof leaks or neglect.  In fact, in a strange way the mall still has character.  While not glamorous, it is a definite a must-see for vintage mall aficionados along with Innsbruck Mall in Asheville. 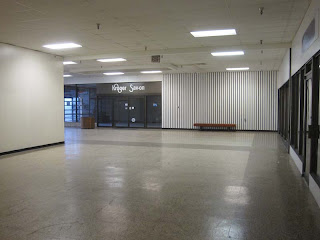 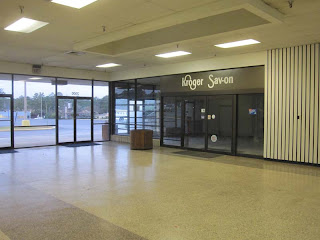 Now approaching Kroger Sav-On.  The Kroger Sav-On concept is actually no more than the standard Kroger today, but it offered a particularly wide selection and more complete shopping experience in the era it was introduced, making it a combination grocery/discount concept.  A few stores in the area still have this name.  That white and black rippled wall is a 70's design I have not seen in years, but I do not know what it is called. 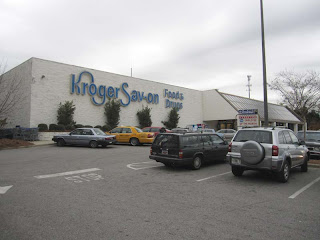 A more standard-looking Kroger Sav-On is located across from Richland Mall for comparison and a view of the logo.
Decker, in comparison to the other Richway malls, is symbolic of not only its vintage, but also the ills of the area it is located.  Bush River Mall had a gruesome fate, but it has since redeveloped into a shiny new Wal-Mart Supercenter.  What happened to Bush River was that when Target left the mall in 1999, so did everyone else.  Absolutely nothing was left in the mall, and it was abandoned soon after.  The mall was essentially trashed at that point, and somewhere in that same period a significant portion of it burned to the ground, leaving odd parts of the mall standing as well as the former Richway.  The remaining shell was demolished for Wal-Mart in 2005, so no sign of Bush River Mall ever existing remains today.  Decker Mall also had a similar exodus of key anchor tenants, so why is this mall so different from Bush River? 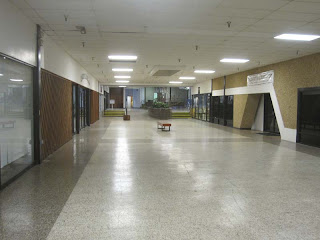 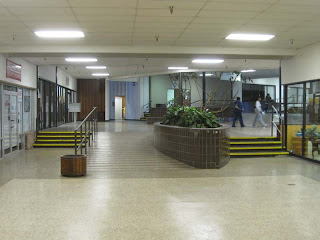 Looking back along the Kroger wing back toward center court. 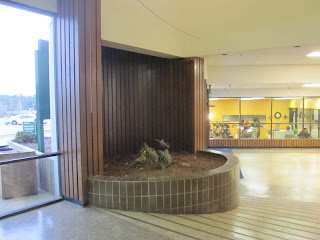 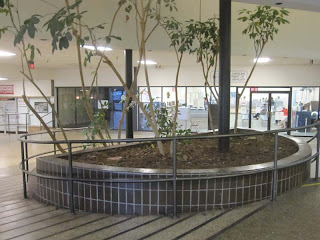 The major planter in the center court, shown in better detail.  These plants are skinny, wild and woolly but still do not trump the jungle planters at Innsbruck in Asheville. 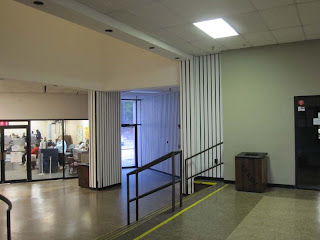 Why do old malls like this always have something kind of strange and a bit creepy?  Right off center court is this strange little back door, also including that accordion-type stuff like that next to the Kroger Sav-On entrance.
Woodhill Mall's failure was due solely to the failure of Tapp's.  Tapp's was the strength of the mall, and when it failed so did the mall.  Target, however, actually did not leave the mall at any point.  In 2004, the mall was simply torn down along with the Target and redeveloped with Target opening in the new shopping center.  The new shopping center still bears the Woodhill name despite the fact that it bears no resemblance to its former self.  The Woodhill location is the most affluent location of the three Richway malls while Decker is currently in the most depressed area. 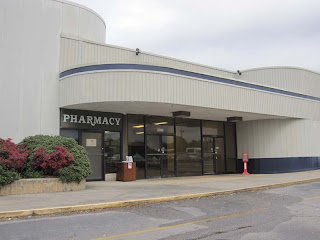 Now, heading outside to look at some of the other quirkiness of Decker Mall.  Here is the entrance on the Kroger wing.  The Pharmacy sign o the left was a separate drugstore entrance right next to the mall entrance.  Note the old-style font used for "Pharmacy". 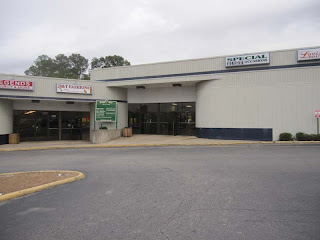 The center court entrance is outright bizarre.  Two entrances are beside each other with one set higher than the other.  Inside, this is the "center court" with a ramp dividing the two areas. 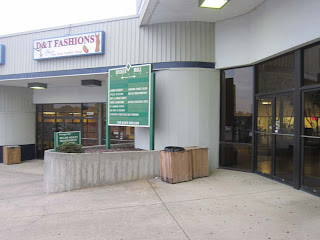 More detail of the main entrance.  Note the mall sign in the center, which is also a directory.  More detail is shown below.  Also note the rounded wall between the two entrances.  This is nook with the small planter shown in the photo above. 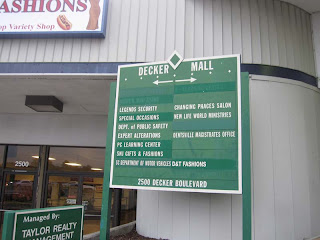 Decker Mall has nothing to be ashamed of.  It does look like they were a little more full further back, but this is impressive for an anchor-less archaic mall.  I am guessing the last two panels were for Kroger Sav-On and Target.  One of the labelscars read "A+ Learning Center".  I am actually most impressed with the actual retail stores operating in the mall even though they are all very small local businesses.
Today, there is not much to say positive in regards to the future of Decker Mall, but there is a lot to say positive on how the owners have managed to keep it partially filled with no major stores.  The scenario it is in right now is the best scenario period.  A possible remedy would be to somehow lure Kroger back to the center or Publix to the site by allowing them to rebuild the store.  Another is to just knock it down, but the economy in general as well as locally is going to make that more difficult.  Maybe Wal-Mart is also interested in that site, but it is not nearly as well located as Bush River Mall was.  Bush River has high visibility from an interstate while Decker is nowhere near one.  No matter what the outcome, Decker Mall remains and hopefully will continue to operate so that at least others can show their kids what the 70's and 80's were like. 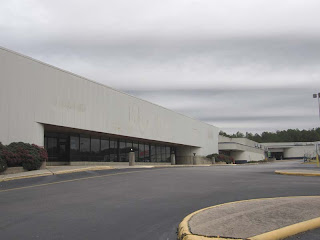 I could have done a little better job showing the old Kroger Sav-On, but you can make out the labelscar i the photo along with a bit of an overview of the mall. 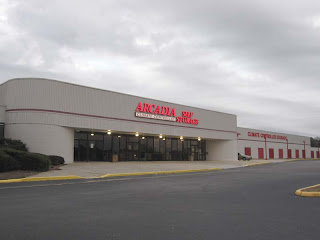 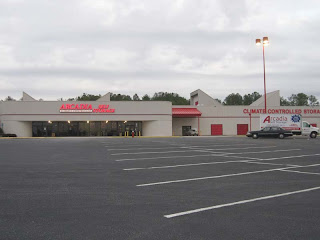 Lastly, I'm looking at Richway, whose final tenant was Target.  It operated as Gold Circle for a short time in 1987-1988.  I am guessing all Richway stores would have eventually become Gold Circle had they not been forced to sell off the chain.
Posted by J.T. at 1:10 AM