It is funny sometimes how towns get malls that are neither big enough to support them nor are they in a good position to have one.  Less than 20 miles south of Asheville, Blue Ridge Mall is definitely this, but nevertheless it found years of success as a second-tier mall in a second-tier market.  Opened in 1983 and renovated in 2000, the mall is definitely one of the smaller malls of the era at little over 300,000 square feet.  Nevertheless, it is still not dead, anchored today by Belk, JCPenney and Kmart with a Sears hardline store as a junior anchor.  It is also conveniently located on US 64 just west of I-26 between Asheville and Spartanburg, SC. 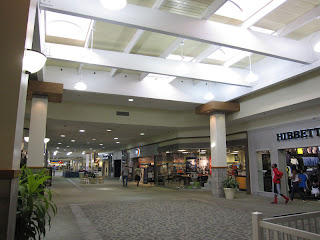 Aside from these facts, all is not well with Blue Ridge Mall.  The mall has a major vacancy problem, and it is today around 50% vacant.  The mall has no restaurant, it is very plain and simple and it seems to attract a lower income crowd.  The mall has had such little love for it that when Belk Simpson converted to plain Belk, they didn't even center the Belk logo when they took the "Simpson" off the mall sign.  Interestingly, the Kmart actually looks to be an afterthought in the mall.  In fact, there is no access to Kmart except IN the mall!  I am guessing a Sears might have once been planned there.  One interesting note, though, is a Game Stop at the mall that is accessible only from the outside on the front of the mall. 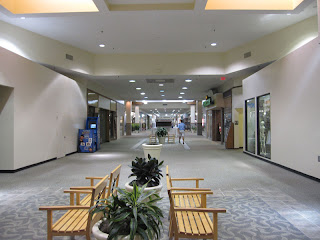 This mall is pretty much a straight shot.  I am standing outside Belk (Simpson) looking toward Kmart.  You wanted a mall?  You got a mall, said the mayor to the townsfolk. 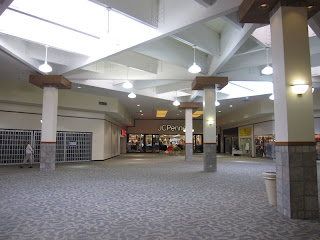 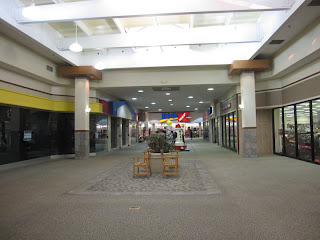 Looking in the third court toward Kmart.  I haven't noticed Kmart helping malls much, so why did anyone ever think it was a good anchor?
The vacancy rate at Blue Ridge Mall seems to be very sudden.  I noticed that several stores that had closed in the mall look to have done so recently, and the mall did not even have a chance to cover them up.  Stores included a Hallmark and some kind of children's store as examples.  A Waldenbooks was holding on, but with the planned round of closures, I have to wonder if this and Biltmore Square are both next.  The mall has no food court, no second level and nothing design-wise to draw you to the place.  It seems to me that this mall should have looked more like Three Star Mall and that one look like this one.  The fact is, the mall is owned by Hull Gibson Storey...a mall group that owns a lot of small town malls, many of which are struggling to hold tenants in an increasingly deflating economy in towns with fewer jobs and less money to spend. 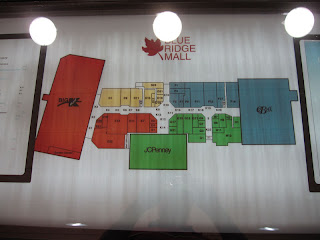 This is about as basic of a three-anchor mall as you can get. 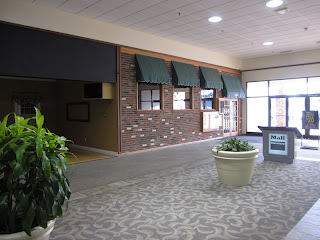 McGuffey's Restaurant was once here.  On the outside, it had a greenhouse area.  I am not sure when they went out of business, and I know there at least used to be one of these at Asheville Mall. 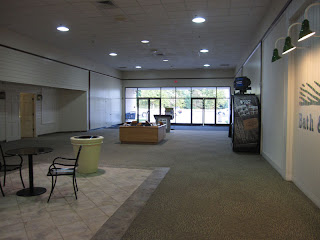 Looking towards the rear main entrance to the mall.  JCPenney and center court are behind me. 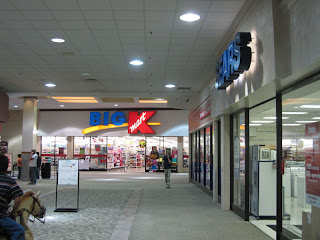 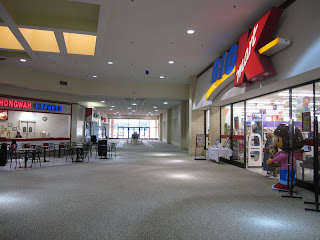 Here is the Kmart mall entrance from two angles.  Note on the last photo the entrance in the background.  Entrances come into the mall from both sides, and these serve as the only entrances to Kmart.  I guess Kmart works not having an outside entrance since their hours pretty much match the mall hours. 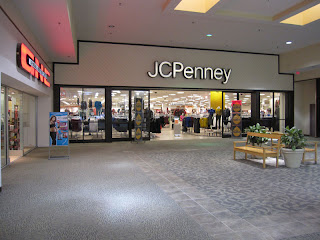 Penney's features diagonal cut wood painted over with white paint and black trim.  I suspect this wasn't painted over before the 2000 renovation. 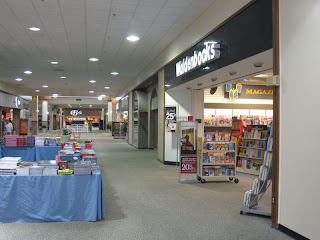 Waldenbooks hangs on in the mall.  These intrigue me a bit lately since they are apparently an endangered species as Borders attempts to phase them out to save themselves.  Barnes & Noble similarly has shed off B. Dalton and Cole's over time.  I expect them to be gone by next year in this mall. 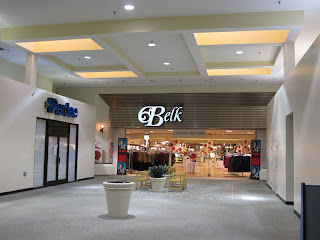 Belk _.  Something just seems very sleazy about Belk refusing to re-center the Belk logo after the Simpson family was bought out of the deal.  This mall entrance is freaking ugly, too.
I really do not know what to say in regards to this mall.   Theories abound in why it is not doing well.  The opening of Biltmore Square 20 years previous I am sure did not help either.  I suspect that both malls are cannabilizing each other.  Hendersonville is a nice town, but it is not a very large town either.  It is more industrial than Asheville, and it really has not had the growth to support a regional mall.    The owners would do well to tear down and redevelop the mall, leaving JCPenney and Belk.  Otherwise, both anchors are likely to leave the mall for a lower-key strip mall or lifestyle center.  The Belk was virtually empty when I visited, and the only tenant that seemed to be doing well was Kmart.   In all, I don't know why Blue Ridge Mall is dying, except that is too small, too close to Asheville, has a boring layout and most of the tenants in the mall are the kind that found they could do better in a strip mall.  I really cannot say what the future of Blue Ridge Mall is, but I do not expect it to last long in its current state. 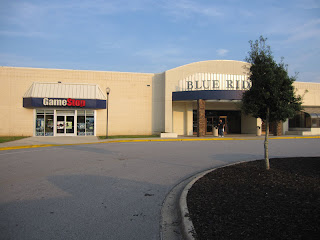 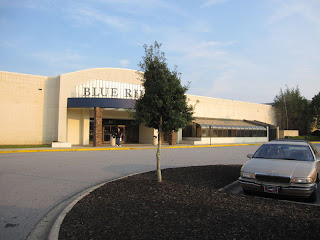 Two angles of the same mall entrance between Belk and Penney's.  The first shows a Game Stop with an outside-only entrance.  The second is the greenhouse that went with McGuffey's.  I remember the time when greenhouses were all the rage.  Now, places that still have them generally front scary Chinese restaurants and title pawn places. 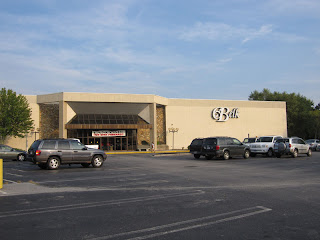 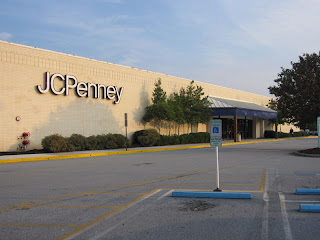 Penney's looks 100 percent tacky on the outside.  I'll give it a D+ for a solid design. 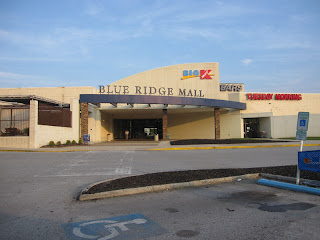 This mall entrance was drastically modified at some point.  I seem to remember it previously just said "MALL" in big red letters.  I only recently noticed it had a name, and I wonder if that is a recent development.   I think "White Rock Mall" would be a better name, anyway.  It looks like a big, white rock to me. 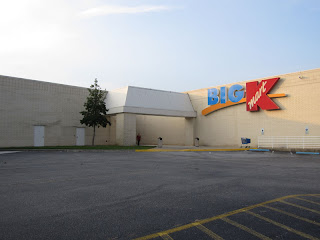