Malls of America back in 2006 did a piece on Westgate Shopping Center, Asheville's first major strip mall located just outside of downtown. While it has long since been eclipsed by malls and other shopping centers, the little strip was quite significant when it opened in 1956. What was especially unique about it is that it was built with its very own exit ramp! When opened, the shopping center featured a Winn-Dixie, W.T. Grant and the Asheville-based Bon Marche, which at the time had a much larger store downtown [1]. With that, I actually wonder if they closed the downtown store for this much smaller shopping center version considering the two stores were less than a mile apart! 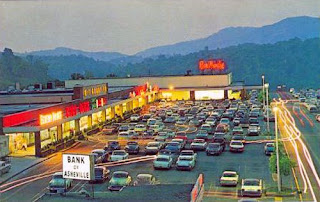 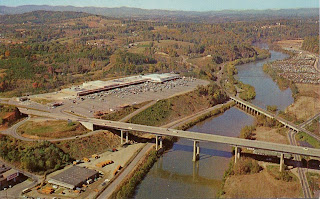 Westgate Shopping Center at its peak from the late 1950's/early 60's.  Both photos are from "Malls of America".
While I was not around to see the progress over time of the shopping center, the fact is that it's still around today and hardly a ghetto strip. Asheville in all honesty really does not have a lot of ghetto compared to other cities in the South, so older businesses and shopping centers tend to hang on long after their heyday is over. In fact, a fair amount of mid-century signage and architecture hangs on all up and down US 70 on both sides of downtown. However, because of this new development in the city is very susceptible to overbuilding, which is why a major shopping mall just south of the city is failing. Westgate Shopping Center itself is not exactly thriving, but what is there is working well. 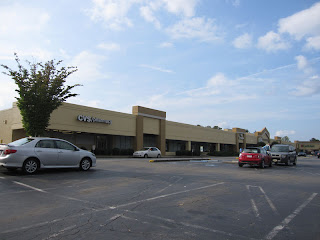 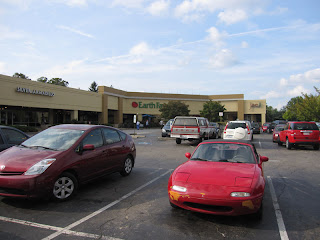 Looking today at the shopping center from the smaller end closest to I-240 and at the edge of the old Bon Marche, now sided with Earth Fare.  Earth Fare is not the first Asheville store to expand.  Ingles, Rose's and Sky City all got their starts in the Asheville market and the latter two were successful for many years despite their eventual decline.
As to the Bon Marche, I really cannot predict when it might have closed, but I am guessing the location closed in 1972 when the new Bon Marche location opened at Asheville Mall.  I have heard that Meyers-Arnold took that location, eventually bought out by Upton's.  Rose's eventually took over the Grant's as well. Shortly after Bon Marche disappeared, Grant's, of course, closed with the chain in 1976. Beyond that, what I mentioned taking their places is speculation based on previous comments about the place. My knowledge of North Carolina retail is limited, and I did not pay any attention to this place when I was younger. 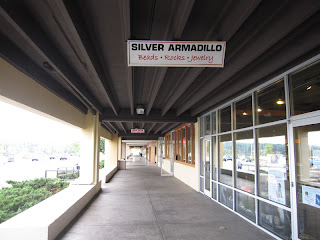 Looking under the covered walkway extending from Earth Fare back to CVS.  It looks like much of the classic architecture has been covered up, but the overhanging wedge signs are still there.
Today, Westgate Shopping Center faces an uncertain future...not because of its age, but because of the grossly inadequate interstate highway it sits on. I-26 was extended through the city in 2003 along I-240, creating high traffic on a piecemeal primitive freeway through the town. Plans abounding to relocate the problematic freeway have threatened the future of the shopping center, and one of those plans involves outright tearing it down for the freeway. Fortunately, the current owner feels that the history of the shopping center is important and does not want that to happen. Now if we could find some other shopping center owners that showed that kind of love for their classic retail. 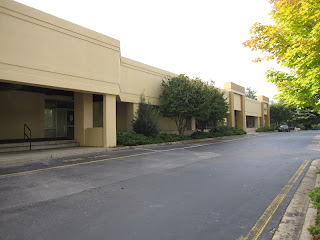 Now looking at the rest of the shopping center where Bon Marche used to be.  This part is looking a little barren, unfortunately.
Westgate Shopping Center's major tenant is Earth Fare, a local natural foods supermarket that serves as a small town version of Whole Foods. Whole Foods does not seem to be in Asheville, but Earth Fare is all over the city. When I visited, this store was extremely popular and featured a very contemporary and extremely dark interior decor. The clientele pretty much represented what modern Asheville is known for...older rich people who moved in from elsewhere and plenty of hippies. Of course, the cross section of the crowd actually looked like the kind of city I would be fairly comfortable living in. 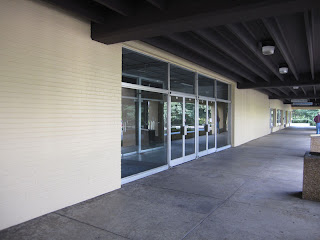 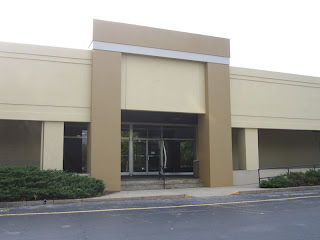 A look at the Bon Marche entrance, last existing as Davis Furniture.  I wonder what filled this space after Bon Marche left in the early 70's.
The only other major tenant in Westgate today is CVS Pharmacy. Other stores seem to cater to the same crowd swarming Earth Fare. Of course, the biggest tenant, the old Bon Marche, was found lacking of a store currently. Its last occupant, Davis Furniture, up and left for the old Goody's space at Biltmore Square. Considering the condition of Biltmore Square, that seemed to me like leaving safe harbor and boarding the Titanic. Of course, the empty anchor allowed me to take a few photos of the old Bon Marche, which today still carries the bearings of a classic department store: two sets of doors and a wide open room inside with high ceilings covered with a dropped ceiling filled with lots of lights under clear glass sheets. 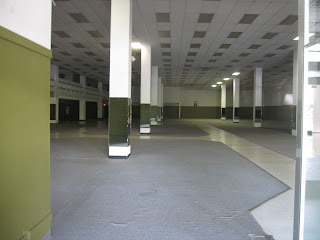 A look inside the old Bon Marche gives a very 50's feel.  Much about this store reminds me of typical late 50's department stores when looking at the ceiling, floor and column treatments.
What stands out close to I-240 is the abandoned Bank of Asheville branch found in the older picture. I do not know how long this has been closed, but the location today is the most vintage element left in the center, which has otherwise been renovated fully with a stucco facade. However, I would definitely say it would make a good Starbucks if they haven't already covered the city with locations. 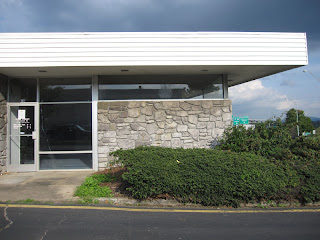 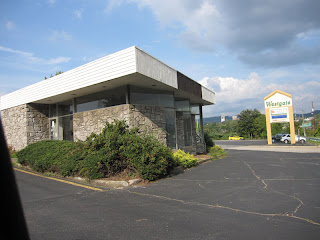 Looking here at the old Bank of Asheville branch, which seems to have been closed a little while.  I seem to remember the Bank of Asheville sign still being there recently if my memory is right.  Does anybody else see Starbucks potential here?
As for Westgate today, the shopping center is struggling a bit with identity in a saturated market. While Asheville's downtown is a fairly hot destination, it is not a place people go to shop like it was when Westgate opened. Most of the stores there are specialty shops, and Westgate is by no means on the city's fringe anymore. In fact, this is essentially a downtown shopping center, and it is too far removed from Asheville Mall nearby to participate in most chain retail development. The shopping center as a whole could be full again, but it would not be everyday stores filling the void. One thing that makes me cringe is something like a Goodwill opening in the old Bon Marche, but this would be a perfect location for the sporatically located and wildly popular Micro Center chain. Perhaps an upscale department store outlet might also do well here. 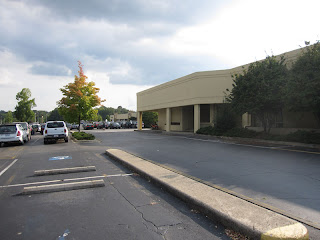 Looking back lengthwise along the shopping center from the old Bon Marche toward I-240. 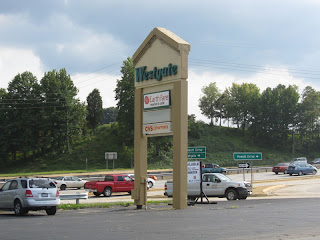 Nothing too exciting with the shopping center's sign.  I wonder how long ago the old googie-style sign I'm sure was here was removed.  Also note the ramp and frontage road just behind it.
Westgate has been around at least 50 years, and it has survived this long. Today, it hardly stands out as a shopping destination since the shopping center is fairly plain and its offerings are limited, yet it gets an enormous amount of exposure with its own signed exit. Judging by the business of Earth Fare, anything that was unique to the market with a good marketing scheme would do very well here, thus my Micro Center idea. In all, this grand old lady could just use a little more attention. Just painting the stucco a more showy and attractive color and adding some unique stores not found elsewhere in the market I think would bring the sickly strip back to spry. With just the right mix, maybe it will hang around for another 50 years...that is, if NCDOT keeps the bulldozers away.