The Galleria Specialty Mall is the interesting idea for a mall that both time and people forgot. In the time that malls were being touted for everything from neighborhood shopping to the palace of commerce, quite a few not-so-good mall ideas came on board. Short-lived and long-lost Parkaire Mall and Rio Mall come to mind in the mall-obsessed 70's and 80's. Since the public still had only one acceptable idea of what a mall is, these other experiments pretty much were doomed to fail from the start. However, Galleria Specialty Mall seems to have been the oddity since it has somehow lingered for 27 years. It is a lot like Cobb Center Mall in how it lasted on life support for a long period before it was finally put out of its misery, and the end is close for Galleria Specialty Mall. 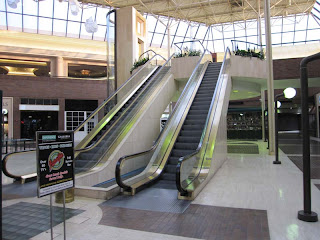 Up escalators in the mall. These go to the convention center, once the mall's second floor of shops

Opened in 1983, this mall that was created as an upscale attachment to the multi-story Waverly Hotel that opened a year earlier. When it opened, it joined the area retail powerhouse that included Cumberland Mall across the street. Attempting to capitalize on what was then one of the premier retail corridors in Atlanta, the mall was initially successful. Into the 80's, however, the opening of Town Center at Cobb and the decline of Cumberland Mall from its prominence in the early 80's would take its toll on the mall portion of the Galleria. In addition, marketing an upscale mall without an anchor and outside of the periphery of most upscale shoppers was rather difficult. 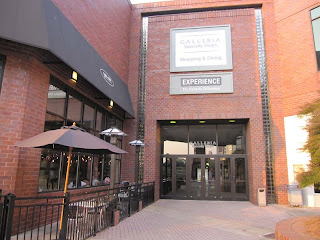 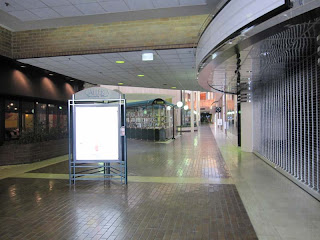 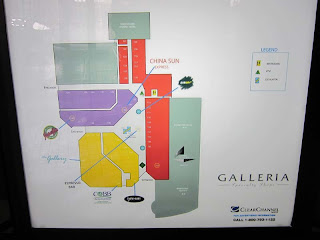 The mall directory shows three entrance corridors and a separate corridor going into the Waverly Hotel. The upstairs is not shown since it is no longer considered part of the mall.

As a kid, we never even visited the mall even though we wore out the floor at Cumberland. By the early 90's, it was fairly obvious that the mall was not going to survive in its current form. While the mall was meant to be Cobb's version of Phipps, its fundamental weakness was fairly obvious: no department store anchors. Phipps had Lord & Taylor and Saks Fifth Avenue. Galleria had...lots of pricey local shops. The fact the mall is still in business in any form is odd, and it can pretty much be described as a mostly dead mall with absolutely no hope of ever being revived in a truly successful fashion. 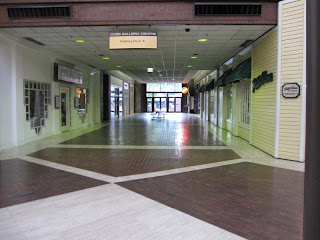 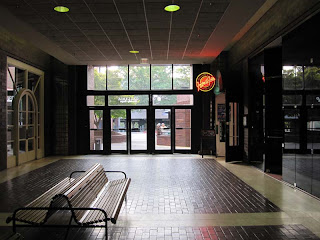 Looking down the northwest entrance corridor off of the main court. The last Jocks & Jills still operates in the mall. 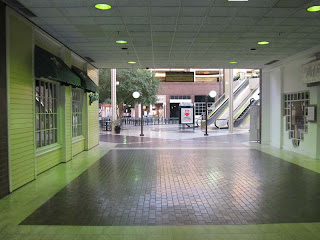 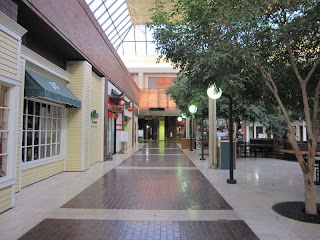 Walking back towards main court. Peter Glenn ski shop is one of the major stores in the mall. Other locations are found around the city.

Prior to 1992, the mall encompassed two levels, which connected to the hotel. How big the mall was overall at that point is not clear, but the second level today is now part of the Cobb Convention Center with only the lower level continuing to function as a mall. That might explain why the remaining ground floor outside of the main court today is so dark and dreary. Since 2005, the plan has been to shut down the mall and convert it to more convention space. Apparently, those plans are on hold because the mall is still very much operational though void of life most of the time. 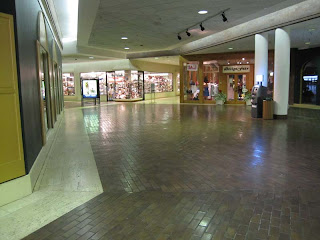 Between the northwest and northeast entrance corridors looking toward the Waverly Hotel entrance hall. 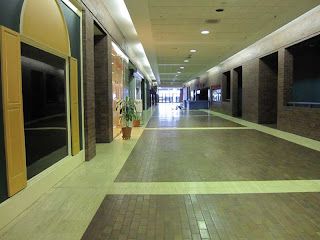 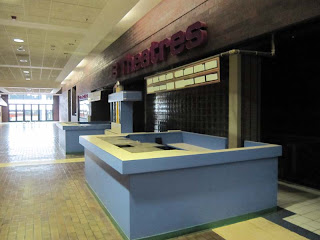 Northeast entrance corridor including the long-closed AMC 8 Theaters. The theaters moved off-mall to Cumberland Blvd at US 41 in a 15 screen theater. 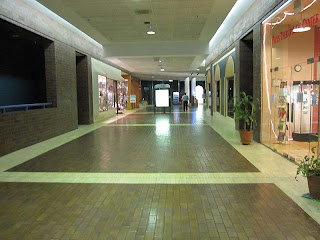 Walking back towards the main court approaching the Waverly Hotel entrance hall.


The Galleria Specialty Mall has been weird for quite some time. During an actual convention the place is packed with people, the fountains turned on and businesses open for customers to the mall. Other times, the mall is as deserted as if it had been evacuated. What stores are in the mall are still mostly local specialty stores and not the chain variety. In fact, the majority of the stores in the mall are closed. Some look to have been gone quite some time in fact. What remains in the mall are a couple restaurants including Chow Baby in the former Ruby Tuesday and the last Jocks & Jills location known. A Peter Glenn ski shop and Subway also operate in the mall. An eight screen AMC cinema also operated in the mall, but it has long since closed. It left for the 15 screen theater down the road on Cumberland Blvd in November 1998. Its closing left that wing mostly vacant. 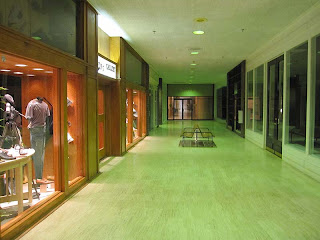 Looking down along the Waverly Hotel entrance hall. This is the darkest, dreariest and deadest part of the mall overall. Something just doesn't seem right about it heading into a hotel instead of a department store. It makes it feel like a dark basement. 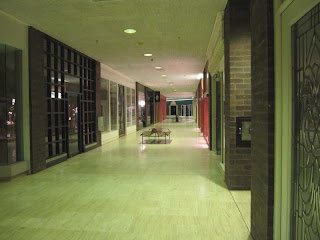 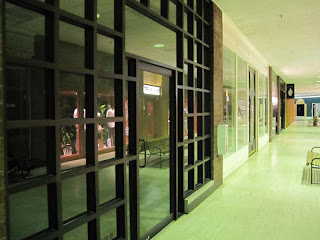 Looking back along the Waverly Hotel entrance hall to the main corridor. Note on the second photo the very old-school door treatments to the closed store.

What is also amazing about the Galleria Specialty Mall is that the building is literally frozen in time. Of all of the 70's and 80's malls in Atlanta, this is the only one to never see any renovations. It looks absolutely no different than when it opened with the same fountains, foggy glass squares, lattice roof, brown tiles and planters. The tiles match those that used to be in Cumberland Mall in the 70's, but the mall overall has touches of what would be considered an elegant mall in the late 70's and early 80's. Today, though, the mall is an extremely depressing relic that is made worse by the fact that the dark corridors lead not to a bright department store but to an aging hotel and convention center. 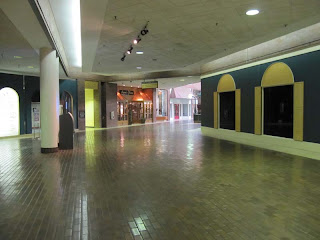 This photo is looking back into the main corridor headed back to main court. The northeast entrance corridor is on the right of me.

The condition of the mall is not lost on the owners, either. The plan as far back as 2005 was for the mall to close, be torn down and replaced with an expanded convention center. Considering the mall was a strange concept in a time when malls themselves are having an image problem, the only renovation that could save this mall for shoppers would be replacing the hotel with actual stores and making it a true mall. However, the relic it is seems like it belongs in my childhood. I love seeing it, but its late 20th century elegance is useless if the mall has no stores. Nevertheless, it is neat to see one last piece of 80's era retail in Atlanta and I hope others will check it out before it is gone. 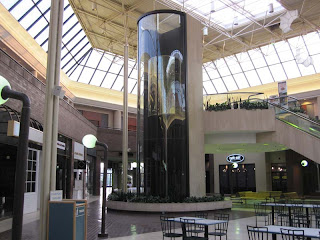 Detail of the glass elevator in main court. 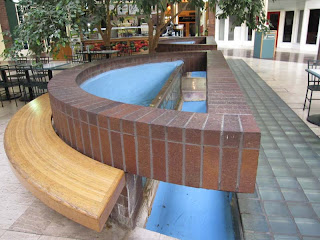 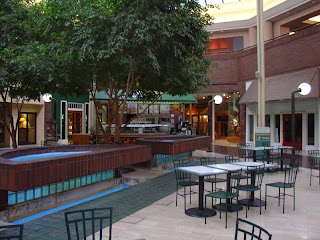 Fountains in the seating area next to Subway and other former food court type restaurants. These fountains were dry, but when flowing went under those glazed glass squares as a stream along the bottom level. 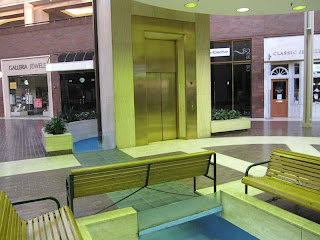 The fountains also flow around the elevator on bottom level with glazed glass square bridges. 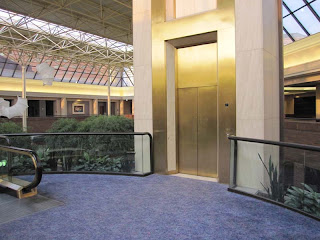 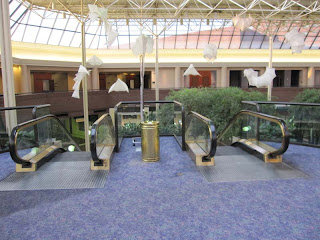 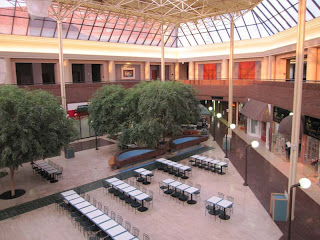 Some views of the top floor. There is not really much to see up here anymore other than overlooking the mall.
Posted by J.T. at 3:30 AM