Many of my previous mall posts have detailed cities with older shopping centers that fought off newer, larger rivals to come out on top.  Columbia is not one of those cities whose malls turned out so romantically.  Columbiana Mall, built in 1990, was just right for the time and place.  As the newest mall, it has since emerged completely the leader of the malls of the region despite the fact it is a one-level center in comparison to larger (and older) Columbia Place Mall and Richland Mall, both struggling.  Columbiana Center also essentially replaced Dutch Square Mall, the city's oldest and smallest mall, though Dutch Square continues to operate today.  Columbiana Center is located in Irmo in Lexington County just across the border from Richland County on the very edge of the Columbia city limits.  It is the only mall in Columbia not in Richland County, and it is located at the southwest corner of Harbison Blvd (S-32-2272) and I-26. 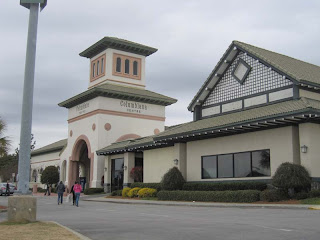 Columbiana Center was very much a planned mall years before it was built.  When I lived in the city in 1986, the site was nothing more than a pine thicket, and adjacent Columbiana Drive was known as "Mall Road".  Mall Road was nothing more than a five lane road to nowhere that ended abruptly at a large barricade past Archers Lane, but resuming past Crossbow Drive as a two lane road.   By 1990, around four years later, the mall was completed featuring only two anchors Belk and Sears with an empty anchor pad on the south end and one facing I-26.  The mall was built with a Spanish theme throughout including evenly-spaced repeating arches across all the corridors. 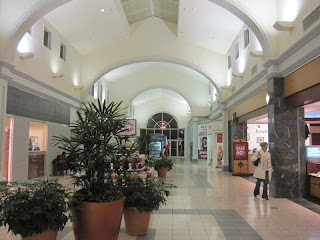 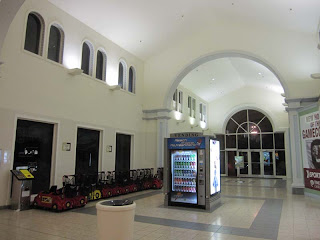 The windows next to the main entrance change to roman arches.  It is a nice touch.  I love it when malls blend high windows and overhead skylights. 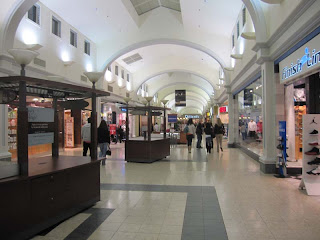 Looking along the Dillard's wing, which from here looks a hall of mirrors.
1993 saw the beginning of many changes in the anchors at the mall.  This was when Dillard's joined the mall in conjunction with a new wing extending diagonally north, leaving the original two empty anchor pads free.  J.B. White joined the mall in 1995 as the third anchor, filling one of the two pads.  Thankfully, JB White maintained its location at Dutch Square despite opening the new store at Columbiana.  The White's carried an award-winning cutting edge design compared to its brutalist and blocky older stores.  It is not known what the other anchor pad was intended for, but it is assumed that was either for Macy's or Tapp's, whichever came first.  Oddly, neither considered joining the mall at any point.  In fact, Macy's instead had agreed to join Dutch Square, but those plans never materialized.  By 1998, the situation became more complicated when Dillard's bought out JB White.  The problem here was that Dillard's already anchored the mall.  As a result, Belk moved from its former location in the mall into White's with Parisian opening its second location in the city in the former store. 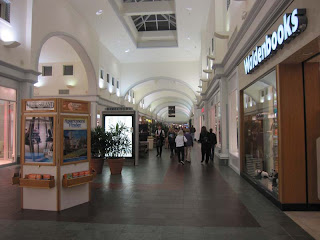 Looking back from Dillard's along the same wing.  Note that the mall has two different types of flooring in different areas.  I like the darker flooring.  It looks elegant. 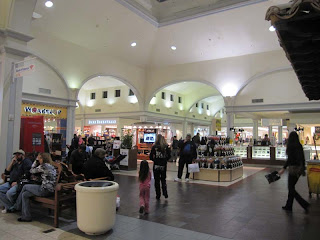 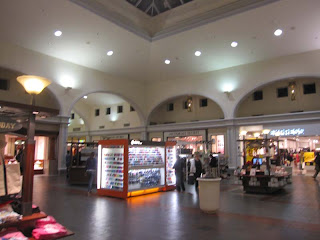 Two of the courts on the older part of the mall.  The first, I believe, leads to the food court (not pictured) while the second is at the edge of the Dillard's wing.  I did not photograph the food court due to the presence of mall security.
The anchor shake-up at the mall only helped to solidify Columbiana's position as the city's premier shopping mall.  After Dutch Square fell into obscurity over the failed Macy's bid followed by White's entry at Columbiana is when the mall grew increasingly as the leader of the regional market.  All other malls were located much further from the hot growth market around Irmo/West Columbia.  Today, all of the upscale stores of the city are located in the mall as well with the tenant line-up full.  In fact, the mall is reaching complete dominance of the market with all other malls in the city struggling to survive since the early part of the past decade.  The last major change to occur at the mall was when Parisian left the Columbia market in 2005.  In its place, JCPenney opened a location in the mall in the store that had opened as Belk.  The result is that only one original anchor continues to operate in the same location it opened in which is, of course, Sears. 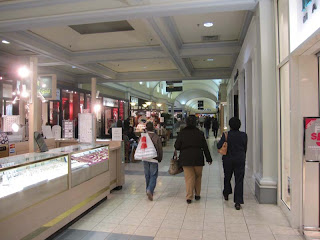 One area of the mall with lower ceilings. 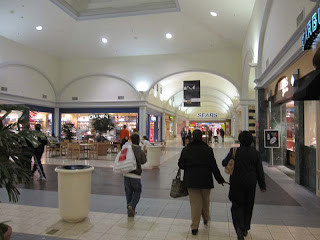 Court area between the main entrance wing, Sears wing and Belk (former White's) to the left. 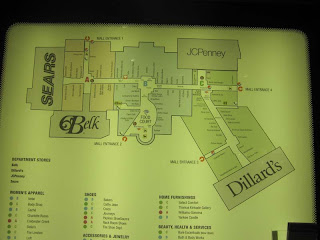 Mall map showing a once boring, rather small mall nearly doubled with the Dillard's wing.
In all, Columbiana Centre is a reasonably attractive mall.  However, a few things stand out to me.  First, why is the most successful mall in the city only on one level?  In fact, both of the city's multi-level malls are failing.  Second, while the design is quite original it heavily emphasizes the stucco, which makes the mall feel cheap.  However, all that stucco looks to be very well maintained.  I did not see any mildew or deterioration on it.  On the inside, the design is quite original and I like the fact it has a very clear old Spanish theme to it.  It does look, however, like the mall may have been stripped down at some point.  I seem to remember fountains and palm trees which simply are not in it today.  I do not much like the name, though.  I would have preferred Harbison Mall, but of course it is not mine to comment on.  Obviously Columbians approve, because the mall was swamped on my visit. 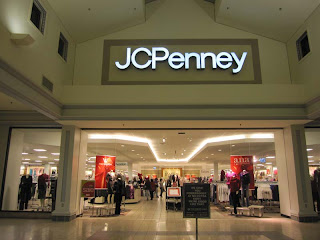 JCPenney looks a little odd.  This had previously operated as Parisian and before that was the mall's original Belk store. 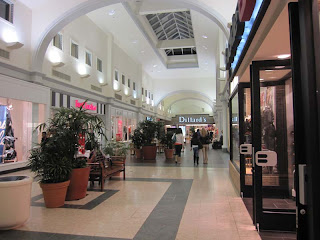 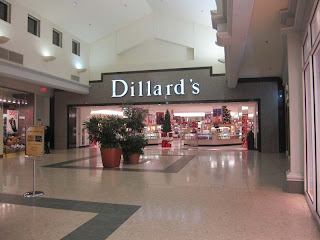 Here, I am approaching Dillard's then capturing more detail of the Dillard's mall entrance.  It is pretty straightforward, and it is the only Dillard's in the city that actually opened as Dillard's.  The outside is a clone of all the others from that period. 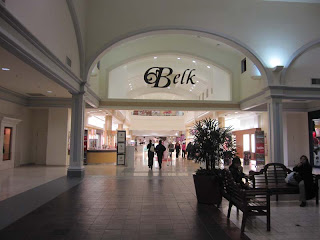 The Belk entrance is something special.  It was the second to last J.B. White ever built.  Belk took over when White's was bought out by Dillard's. 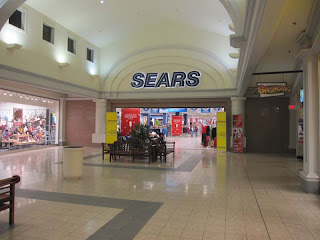 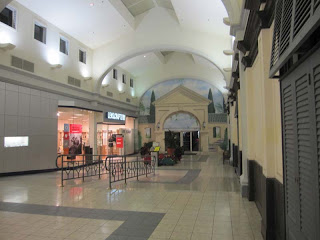 Older part of mall approaching empty anchor pad.  Why did they leave this anchor pad empty while building on for Dillard's?
The Harbison Community was already a major area of new development long before the mall was completed.  However, prior to the construction of the mall the development was entirely residential including many new subdivisions and apartments.  Regardless, the mall was part of the master plan in one of the earliest less recognized examples of huge new planned cities similar to Columbia, MD and Peachtree City, GA.  In fact, Harbison itself spans two cities and two counties.  Like those developments, it was commenced in the 1970's and completed much more recently.  The completion of the mall resulted in an explosion of retail near the mall, but covenants have resulted in this development largely restrained to Harbison Blvd.  Such careful planning may be a significant factor in why Irmo stays a popular area for younger and more affluent residential growth and why Columbiana Mall has emerged the leading shopping center in the region. 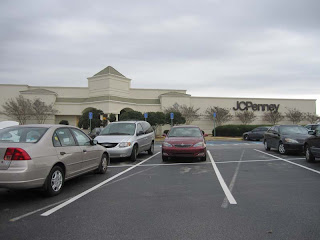 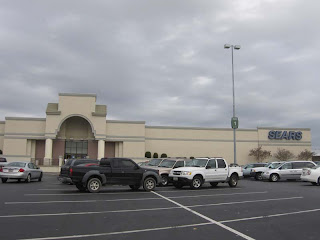 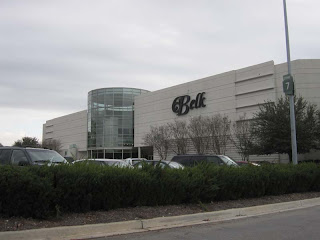 Belk, formerly J.B. White, is the showiest anchor.  The glass cylinder definitely is a design standout.  It's hardly Spanish-themed, however.
Posted by J.T. at 2:11 AM