Enclosed shopping malls were not an entirely new idea when they were introduced to the world in the 1950's.  While the multiple-anchored all-inclusive pedestrian downtown surrounded by a sea of parking was new, the enclosed shopping center was definitely not.  Before that, downtown shopping districts sometimes featured a smaller, classical version of the mall, which was known as an arcade.  Not to be confused with the gaming place that teenagers frequented from the 70's to the 90's, these arcades were typically mixed use structures with at least three levels under one roof.  In these, one or more levels were devoted to shopping with design details more ornate and elegant than their later, larger cousins. They usually fit nicely into a block of buildings downtown, and were typically not connected to any nearby department stores. 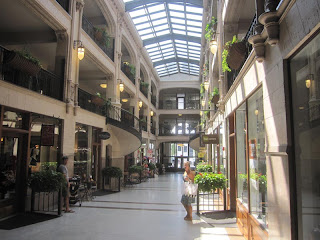 Arcades, likewise, should not be confused with the disastrous "downtown shopping malls" of the 70's, which featured such outrageous atrocities such as demolishing blocks of historic buildings for a huge bunker surrounded by ugly parking decks or parking lots.  Unlike these ill-fated "urban renewal" schemes, arcades blended in with the downtown fabric with outer windows and architecture that appropriately complimented other buildings in the city.  They were typically intricate and elegantly designed inside and out with the main recognizable feature comparable to modern malls being the central overhead skylight.  They also typically covered a much smaller footprint being built up instead of out, typically carrying 3-4 stories.  In addition, the shopping component tended to be much smaller, holding at most 20-30 shops.  Grove Arcade was exceptionally large holding around 50: the size of most early 1960's shopping malls.  Upper levels were also typically devoted to other uses than shopping such as offices and residences meaning they were mixed-use in contrast with modern malls.  Also dissimilar from malls is that they were not designed to have "anchors".  While they may have been near a downtown department store, they were never anchored by one.  Usually, arcades had all entrances opening into the streets with their main crime being that they might have covered a large portion of a city block, but never resulting in the leveling of an entire downtown business district to make room for its quickly despised presence. 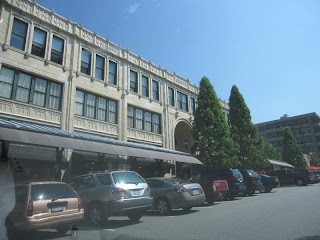 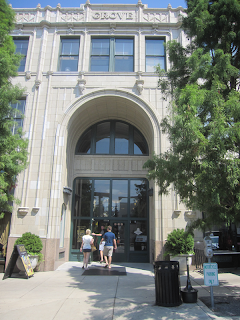 A couple exterior views of the arcade.  Due to the parking difficulties, I was not able to take as many outside photos as I would have liked.  The first photo is of the south hall looking back towards the entrance pictured above.
Today, most downtown arcades of the early 20th century suffered much the same fate as the department stores either reverting to other uses or being demolished for bigger projects because the land they sat on became too valuable for a building of their typically smaller size.  In most larger cities, highrise buildings replaced the lowly arcade although small downtown malls often anchored, less successfully, many of these newer projects.  Of the few that remained, most were ultimately converted to other uses with their original retail component long abandoned.  The historic arcade was no match for modern-era progress beginning in the 1950's.  Grove Arcade almost became a casualty itself: an almost forgotten artifact of Asheville's past until the past 15 years with plans to expand and convert the building to a government-owned high-rise very much in the works. 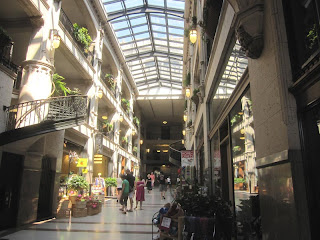 Here is another view of the south hall looking north.  Note the winding staircase on the left.  These have unfortunately been closed to the public. 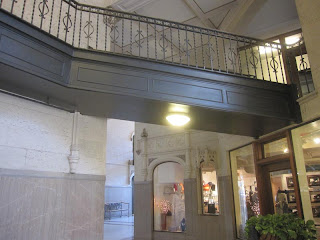 One of the second level balconies crossing over at the center of the arcade.  If only they had looked at this place and taken notes when they designed Biltmore Square Mall.  It is no wonder that mall has failed. 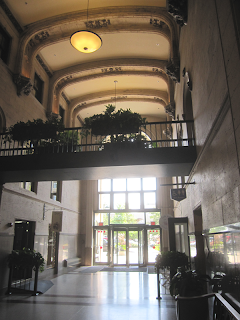 The west hall features a stunning three-level vaulted ceiling with walls adorned with marble.  Imagine any mall looking like this when you walked in.
Grove Arcade followed the typical pattern set forth with conversion to other uses.  Opened in 1929, the arcade was a hit.  Its builder stated it was one of the finest buildings ever constructed, and few would argue the sheer size, opulence and attention to detail that went into this building was a marvel of its time.  It would continue to operate as the premier shopping destination in the city until WWII arrived.  This is when the federal government seized the facility under the authority of the war effort literally evicting all the tenants within almost overnight.  From there, the building would house various federal operations with the last involving weather forecasting.  A movement to preserve and restore the building to its original use did not gain steam until the 1990's when the government began plans to expand the building to suit their needs. 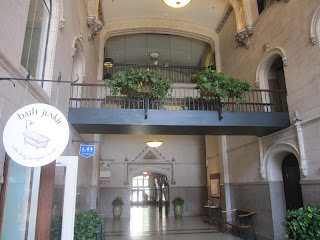 Looking back toward the central elevators in the west hall. 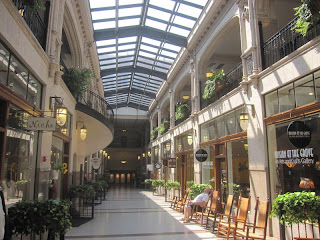 This view is looking back down the north hall toward the elevators.  The guy pictured proves this is not a bad place to kick back on a warm August morning.
When one of Asheville's most distinctive structures was threatened, citizens mobilized.  A strong push was then made to get the government to sell the building back into private hands.  In this time, the structure was placed on the historical register with steps beginning in 1995 to restore the building to its original appearance and use.  This finally culminated in 2002 with the reopening of Grove Arcade back to what it was originally intended for.  Since then, the bottom level was converted back to retail with upper levels being sold as housing units.  Indeed, it has been a huge success.  While the refurbished center has failed to attract any chain stores, the lower level is nearly fully leased with various local shops and cafes.  With Asheville's tourist industry, the center is now pivotal in that district and attracts a whole new generation of crowds into its four glorious halls.  Imagine if such an attitude could prevail when a classic 1960's shopping mall is threatened with demolition. 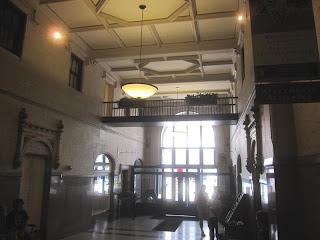 Here is a view of the east hall and entrance.  Being designed in the same era as the Biltmore House, the attention to detail, elegance and gothic trappings are similar. 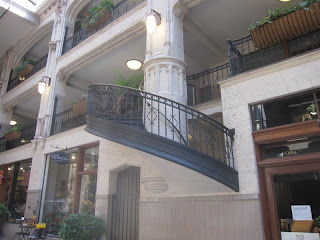 Detail of the winding staircase coupled with the tiny door below.  It seems the popularity of winding staircases sadly died out by the 1980's due to their impracticality.
The success of Grove Arcade, though, suggests the need for further experimentation.  Asheville, after all, is one of the few cities that could likely support a successful downtown shopping district like it once had.  Currently, Asheville still lacks some chain stores many other cities have.  The city also has three malls, but one is failing, and all three are landlocked by roads, buildings and steep terrain.  While one of those does have room to expand, even it would still require a substantial updating and vertical design to utilize the space.  This presents a unique opportunity as the city currently lacks a Macy's or upscale department store such as Nordstrom.  The idea I have is to consider purchasing and demolishing the RBC bank building across the street from the arcade and expanding the existing parking deck across from both.  In the RBC building, a 5-6 story structure would take the place of the current two-level structure housing a new downtown Macy's or other department store designed on the outside to look like the arcade.  Doing this would spotlight the arcade, bringing more shoppers downtown and possibly helping the arcade to truly evolve into a downtown mall without repeating the mistakes of the 1970's.  The potential is there to create a one-of-a-kind shopping destination not usually found outside of New York City or Chicago.   In a time when society is turning cold on the effects of over 60 years of suburban sprawl, such an idea seems more realistic. 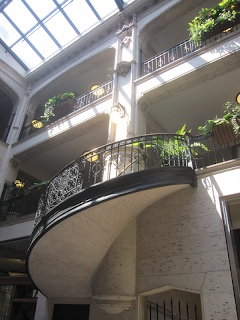 Another view of a winding staircase in the south hall. 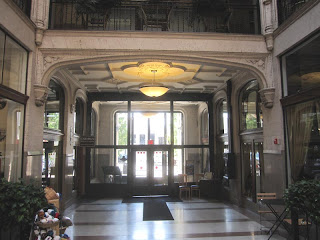 Lastly, detail of the south entrance to the arcade.  Rest assured, shoppers here were of the upper class and dressed in their finest back in the day.  I tip my hat (if I actually wore one) to the successful preservation of a historic retail treasure.
Ideas aside, the interest in historic preservation has revived some surprising treasures.  Before I saw this place, I did not even know that any arcades like this still existed: at least not as public shopping and gathering places.  Grove Arcade itself had fallen out of public use for over 50 years, and today is one of only five arcades to still exist in North Carolina.  Grove Arcade, along with the Biltmore Village retail district are beautiful works of art as well as fun shopping areas in one of the country's most beautiful cities.  With that, it is not a wonder that the malls in the city are anemic.  I hope that Grove Arcade continues to not only be a success, but also brings a new wave in experimentation in constructing new arcades with similar architectural detail to possibly bring upscale shopping back into the larger cities without wrecking them.  Just as they were a good idea in the pre-mall era, they are again a great idea today in an increasingly post-mall era.
Posted by J.T. at 6:00 AM 6 comments:

Wherever a vintage dead mall is to be found, it seems nearby that other vintage items tend to linger.  Places like this ultimately survive, but tend to not update due to multiple factors including that they simply do not have to since they are surrounded by old things and probably do not get the business to modernize as often.  In Lenoir, I found many such places along Morganton Blvd including an abandoned car wash, a very retro 2-screen movie theater and last but not least this gem of a pizza place. 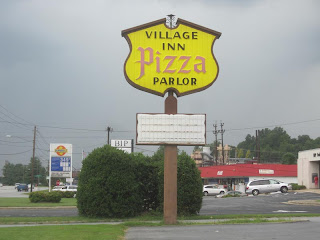 Village Inn Pizza Parlor is not to be confused with the larger Village Inn chain, but does seem to be part of a once national chain that was fractured into similar, but smaller operations run by local businessmen.  Other separately run locations of the same name are found in Michigan and Illinois.  I also covered on this blog a possible former location next to Tri-City Mall.  This place doesn't serve pancakes, and this set of restaurants only has 12 locations in the Foothills/Piedmont region of North Carolina.  This North Carolina group in particular is run by Ray Lackey Enterprises.  Reviews of the restaurant are generally good, but it is also stated that every location is very old as well.  All seem to have distinctive and dated designs, but the one I'm featuring here stood out enough for me to turn around for a few pics with a highly eye-catching Bavarian A-frame design coupled with a 1970's period road sign. 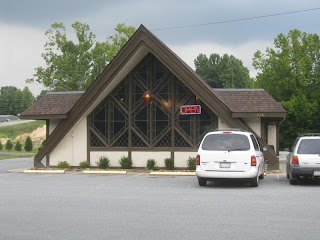 A moody bavarian-gothic A-frame building with a dimly lit interior greets diners which apparently were few in number early in the afternoon.  The skies were just as moody with a severe thunderstorm about to hit.  The first photo is the sign posted along Morganton Blvd (U.S. 64) looking southwest. 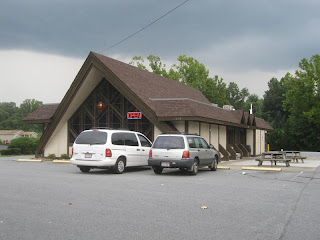 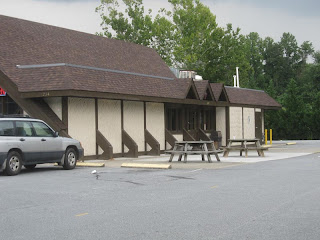 Angry skies overlook a small, quaint and fascinating pizza place.
Since I did not try it, I have no opinion on the food here.  One thing I do know is that apparently each location has its own distinctive design.  The location in Morganton has a Spanish influence, including arches.  Its original location, according to the website, was in Statesville.  My guess on the chain is that it probably has not seen any significant update in 30 years hitting their stride in the mid-to-late 1970's.  I guess that they do what they can to stay profitable.  I would love to hear if anybody has tried this time warped local pizza chain.  Places like this are part of the joy of traveling: especially these archaic chains with dated architecture that give every community some distinction as well as something new for me to blog about.
Posted by J.T. at 6:00 AM 13 comments: