Savannah Mall exists to prove that karma does exist. Conviently moving into a city with only about 500,000 people, the mall opened in 1990 poised to just crush and unravel Oglethorpe Mall, which had been there since 1969 and was showing its age. Oglethorpe still had the prime spot, but Savannah Mall opened with a promising anchor line-up: J.B. White, Belk (also at Oglethorpe), Montgomery Ward and Parisian. Parisian was new to the market when the mall opened and J.B. White was expanding into the market with the new store. According to a contributor on Deadmalls.com, the mall was supposed to be even more upscale with Jordan Marsh as an anchor, but consolidation resulted in the Montgomery Ward.  If Jordan Marsh had anchored the mall, this would have spelled the end of Oglethorpe. 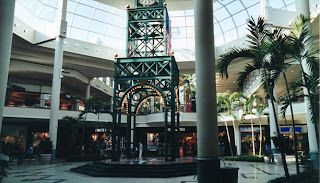 Savannah Mall is quite an attractive two-story mall with the typical late 80's design combined with coastal design features to make the mall modern and pleasant to look at. Problem was, three of the anchors at Savannah Mall were not doing well from the start, and Oglethorpe Mall was not about to lay down and die. At Oglethorpe, Rich's had opened on the site of a former Maas Brothers and the mall also had Belk, Sears and JCPenney.  The mall also undertook a costly and major renovation project in 1992 shortly after Savannah Mall opened in hopes of bringing a grand new style to a formerly simple mall.  Savannah Mall would have likely put Oglethorpe in the retail graveyard had they lured away any of Oglethorpe's other anchors such as Jordan Marsh, JCPenney or Sears but they chose instead to bring in three unfamiliar tenants while duplicating Belk, which already had two other locations.  Jordan Marsh was planned at the mall, but consolidation in 1990 into Burdine's put an end to those plans.  That leads us to Savannah Mall from 2003 to today. 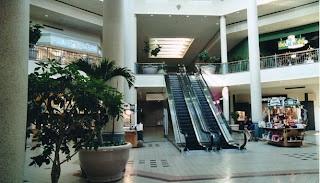 The court between former Montgomery Ward and Dillard's.  Montgomery Ward (closed here) is straight ahead with Dillard's off to the right.  The first photo is looking at the elevator in the center court with the food court behind it.  All photos here were taken in late 2003. 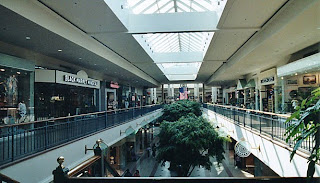 A view from the second floor of the main mall.  It looked empty and definitely like a B-mall at this point.  Note the trees on the lower level were far larger than the 2009 photos.

In the late 1990's, Savannah Mall began to show signs of fatigue. Flagging Montgomery Ward left the mall early, closing there in 1998. By 2003, the mall was in trouble. Belk consolidated its glut of stores to Oglethorpe, eliminating a weak duplicate anchor at Savannah Mall as well as its original suburban location in Thunderbolt on Victory Drive. Parisian failed to enthrall the market and simply left Savannah. J.B. White also was bought out by Dillard's, effectively removing all the original anchors to the mall. Even before, the mall was leaching tenants. It was a similar scenario that later took down Century Plaza Mall in Birmingham, but the situations were different.  This was because later that summer, Bass Pro Shops moved into Parisian and Target announced that it would replace the Belk (tearing it down).  Steve & Barry's University Sportswear also took up the lower level of the old Montgomery Ward in 2004. 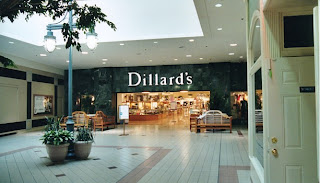 Dillard's mall entrance in 2003.  Nothing has changed since then. 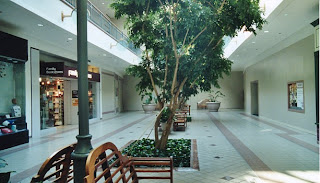 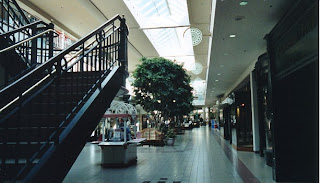 A look along the lower level.

While today the mall has all but one of its anchor spaces filled, it is definitely no longer the threat to Oglethorpe it was.  While I find it a bit disappointing to look at these days with many national chain stores gone and a sundry offering, I am glad it pulled through and seeing how it seems to be making it, I think it definitely deserves to be taken off of deadmalls.com.  However, I do think it would be nice if the mall could be renovated.  However, in all I wish that the original developers had not overstated the market and built such a large mall.  A smaller mall with anchors J.B. White and Parisian was much more sensible, and at that size it could have complemented instead of threatened Oglethorpe.  Of course, if that was done would Oglethorpe be what it is today? 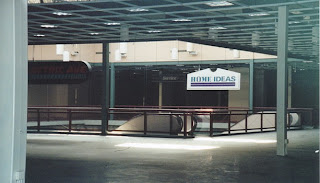 Inside the vacant Montgomery Ward on the upper level.  It had been sitting empty for five years when this picture was taken. 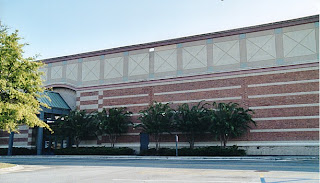 Outside view of former Montgomery Ward.  The labelscar was still visible in this photo. 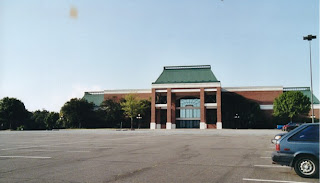 The front side of the vacant Belk Beery store.  This has since been demolished and is now the outside entrance to Target. 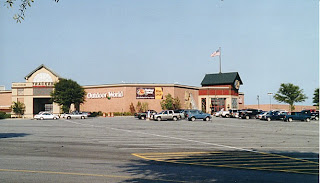 Outdoor World, then newly opened in the old Parisian.