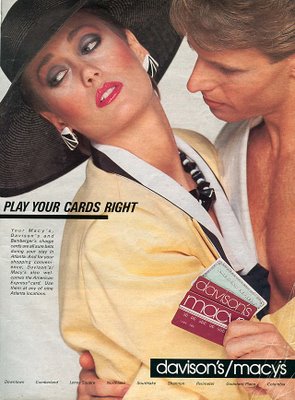 Atlanta had two big department stores: Rich's and Davison's. Atlanta also had Kessler's, Muse's, Regenstein's and Allen's, but these were the big two and most remembered. Rich's was the reverenced store while Davison's played second fiddle, though ultimately they sold basically the same merchandise. Still, at the time it was pretty unmistakable which was the better store, and owner R.H. Macy, Co., which had bought out the much smaller Davison-Paxon-Stokes Co. in 1925 decided 60 years later in 1985 that the local division of Macy's for Atlanta was no longer worth keeping local. 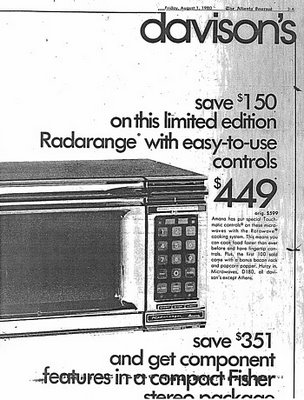 Davison's was actually more expansive than Rich's in Georgia with not only the big downtown store on Peachtree Street, but also downtown stores in Athens, Columbus, Macon and Augusta during its 60 years. Davison's, however, was much slower than Rich's to hit the suburbs across Atlanta.

Being tied to Macy's, Davison's had two logos. The more famous of these was the blue all-caps logo that was used prominently through the 1960's and 1970's during suburban expansion. That logo was changed in 1980 to match the Macy's in logo in font as evidenced by ads on this page. An interesting note is that during the 1970's, Rich's had its memorable green sign while Davison's had its blue sign.

Davison's today serves as an interesting reminder of the insanity of department store consolidations. Davison's was owned by Macy's, but merged into Macy's along with sister chains Bamberger's, La Salle's and Taylor in 1985 and was called Davison's/Macy's in 1985 into 1986 before being simply Macy's. Eighteen years later, through buyouts, Macy's came to finally kill off the beast that made life so hard for them in Atlanta: Rich's. Like the ultimate insult to the once grand chain, Rich's became Rich's-Macy's and finally just Macy's in early 2005. As a result, both of Atlanta's once grand old department stores are now just dull Macy's stores in name only anchoring all of the malls in Atlanta.
Posted by J.T. at 4:39 AM