Some malls stand out as major landmarks that are impossible to miss.  Cressona Mall is not one of those.  In fact, if you pass it driving along PA 61 you would easily mistake it for a strip mall.  If not for the name, you might not even notice that there was a mall there, but in fact there is.  A mostly dead one, that is.  While Cressona Mall has remained somewhat viable as a strip center, the interior mall is today barely hanging on with just a few local shops and a Goodwill store.  Nevertheless, for the lover of the mostly lost "community center" mall, this is one of the very few examples remaining today. 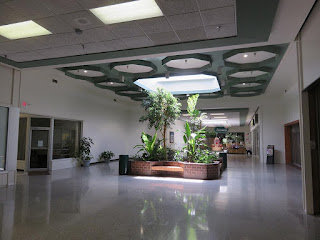 Most community malls were designed to be basically a strip mall turned inward.  Never large and never very fancy, the idea was that a climate controlled mall could house the same tenants normally found in an open-air strip center usually on less land.  Initially the typical strip mall tenants lined up to fill these malls mixed in with a variety of local stores.  In no cases did it work considering that shoppers proved unwilling to trek into these mini-malls, and chain stores likewise fled leaving a leaky, nearly derelict building with a few local businesses operating on very low rents.  Eventually the cost of maintenance led to the building being demolished in favor of a traditional strip mall.  Cressona so far has proved to be one of the very few exceptions. 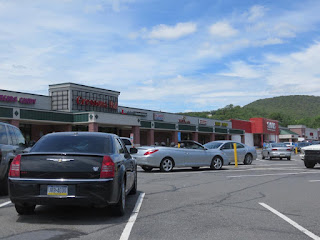 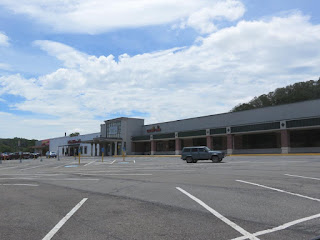 The first photo is looking down the south wing of the mall toward what was Hills/Ames with a narrow office corridor to the right.  The next two photos are exterior shots looking toward Giant and Staples (former Grant's).  The second photo is looking to what was all originally Hill's, later Ames. 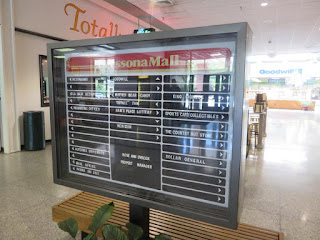 The mall directory shows significant vacancies in 2015, but apparently many of these have since been filled or shops combined for larger tenants. 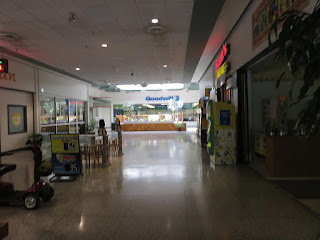 Front entrance wing looking to center court.  It is not known what the Goodwill was originally.

When Cressona Mall opened in 1974, it housed three major tenants: a Grant's, Hill's Department Store and Bi-Lo (a local supermarket not to be confused with the larger Southern chain).  Grant's after closing with the chain became Lane Department Stores and today is Staples.  Hill's became Ames after Ames purchased the chain in 1998.  Ames at that point had overexpanded and went out of business four years later.  Today, the former Ames space is divided up into three spaces with Ollie's on the far end, a medical center in the middle and the portion connected to the mall itself still vacant.  In fact, an Ames sign remains today at the mall entrance in the Hill's oval.  Buy-Lo also changed twice: first to Insalaco (which today is a real estate development firm) and later to Carlisle, PA-based Giant.  The grocery anchor never had direct mall access. 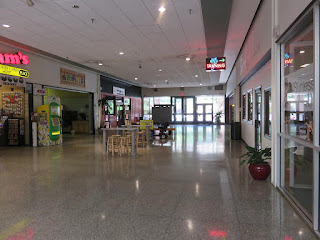 A separate look at the front entrance wing, which is the most vibrant part of the mall. 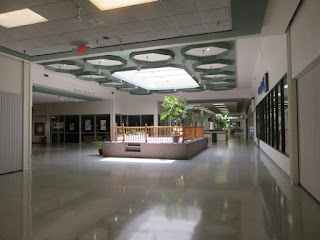 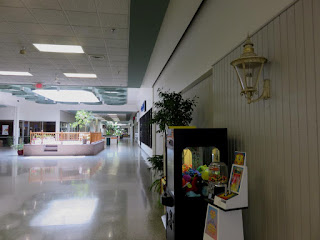 A view of center court and what appears to have been a local department store in what was now the Goodwill judging by the fancy light fixture. 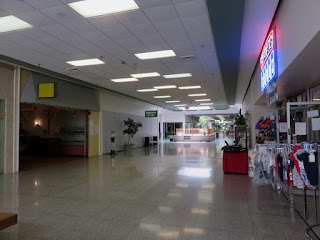 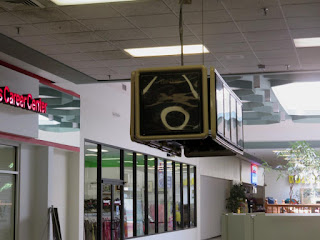 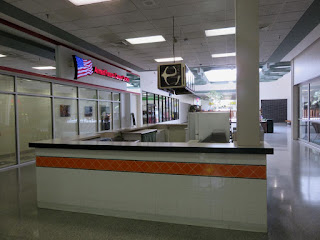 This snack bar kiosk looks to have been pretty much untouched since the 80's, but does anybody know what it used to be?

The mall's struggles are by no means remarkable.  The fact that a mall is still there and open to the public is what is actually remarkable.  Not all of the mall, however, is still intact.  Dollar General built their store into existing mall space cutting off access to Staple's, which originally had been Grant's.  The mall otherwise exists today with few tenants dependent on inline access and the most vacancies found in the main part of the mall.  The front part, however, is the busiest and includes a candy shop near the front entrance is definitely one of the best I have run across. 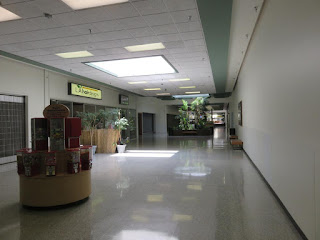 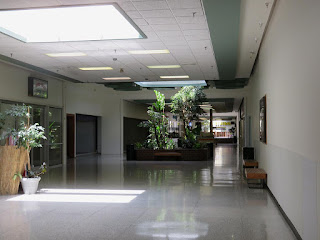 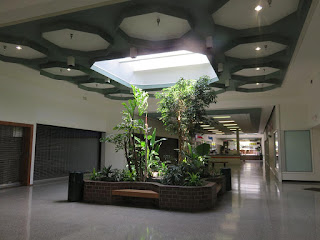 A look at the entire Hills/Ames wing starting at the mall entrance moving to center court.  Dollar General is visible in the background, but the store does not have any mall access. 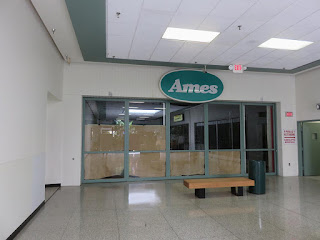 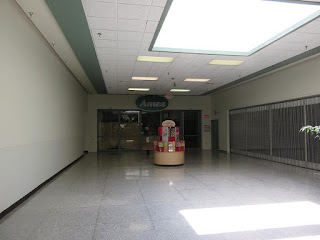 The Ames sign in the Hills oval still hangs on in 2015, but this sign will be removed very shortly for a Planet Fitness.  While sad, it is obviously not in the best interest of a mall to have a mall entrance and anchor pad sit vacant for 15+ years, so it is bittersweet. 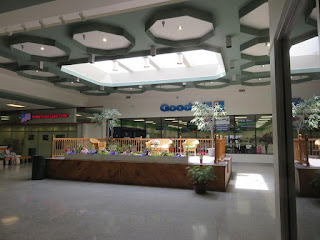 Goodwill takes up a good size chunk of the mall in center court.

Cressona Mall is found on a corridor in a portion of Pennsylvania that has been struggling economically.  Once a center of heavy industry, it joins three other dying malls within a close proximity.  To the north is Fairlane Village Mall, which is anchored by Boscov's and Kohl's although only Boscov's maintains a mall entrance.  Fairlane Village is more than 50% vacant and at present is the only modestly healthy traditional mall in the area.  Further north is the infamous Schuyllkill Mall, a large and remarkably vintage mall located on the very top of a mountain that has been dying for years and may end up closed for good sometime within the next year.  Even further north is the infamous Centralia mine fire that led to the demolition of an entire town suggesting that happiness and a tax base remains a struggle for residents living along PA 61.  South of there is Fairgrounds Square Mall, another struggling mall in Reading, which is likely to be redeveloped after it's sale to Hull Property Group.  After Schuyllkill likely falls to redevelopment, Cressona may not be far behind considering that on April 2, 2015 it was announced that the mall was facing foreclosure.  It is clear the only real problems with the center involve the interior mall portion. 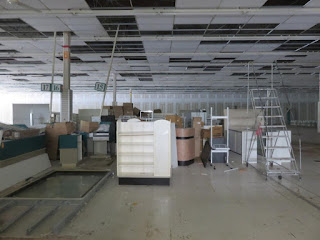 Inside the former Hills/Ames, many relics remain, but the scene only shows 1/3 of the store.  The other 2/3 was split off for Ollie's Bargain Outlet and a medical center. 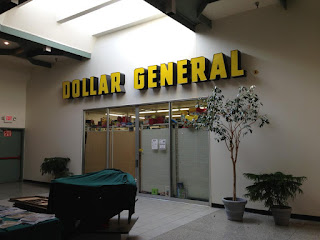 Dollar General creates a mall entrance only to close it off.  It appears Dollar General filled some of the mall space with the Staples behind it the original entrance to Grant's. 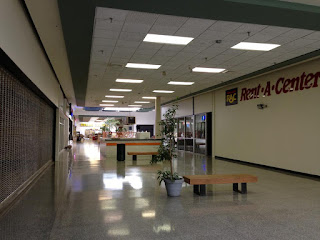 The way to fill a small mall with few options for tenants is obviously to combine spaces into larger ones.  Rent-A-Center on the right takes up many spaces formerly occupied by several smaller tenants.

The owners of this little mall, however, have plenty of front-facing stores to keep this mall going as long as they want if they can just figure out what to do with or without the interior portion.  They just proved they have muscle when it was announced in 2016 that the former Ames/Hill's space would be filled with a Planet Fitness.  Many malls these days have been thinking outside the big box to fill these voids, but it remains to be seen if they will maintain the interior portion long-term.  The article states that out of 21 interior spaces that only six are presently vacant suggesting that either the economy must be picking up in the area or they are leasing to non-traditional tenants.  In addition, PennDOT just completed major improvements to PA 61, which will hopefully drive more traffic into the region.  Unfortunately, this change will also mean the loss of one of the last vestiges of dead retail in the mall: the Ames sign still found at the mall entrance.  At least with the possible jobs coming to a redeveloped Schuyllkill Mall and the continued viability of Cressona that possibly an economic renaissance may be coming to Schuyllkill Valley.
Posted by J.T. at 9:00 AM