Richland Mall [link to earlier post] is nothing short of sad these days with a lonely Belk, a few chain restaurants and an oddly located Barnes & Noble which keep the plywood away from the door.  Nevertheless, through a stroke of luck, three different contributors came forward to give me pics of the anchors at the beleaguered mall back when they were original and still mattered.  Those pics are of the Bonwit Teller, JB White and Parisian.  I couldn't be more pleased that someone else thought to preserve such places before I was old enough or smart enough to realize my camera needed to be there snapping pics of these places.  I am very grateful for their efforts, and I am proud to showcase these here for the first time. 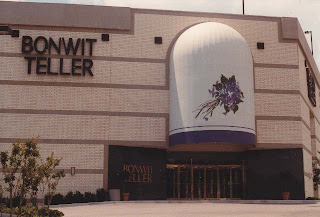 In my previous post on Richland Mall, I discussed the short-lived Bonwit Teller at Richland Mall, then known as Richland Fashion Mall.  A very high-end store, Bonwit Teller was by no means an appropriate fit for a market like Columbia likewise lasting no time at the mall.  The store opened in 1989 and closed by 1993 where it was then replaced with Dillard's and finally Blacklion before going dark along with much of the mall.  I would never have thought any photos of any quality existed of the store, but Michael Lisicky kindly sent me these pics of both the exterior and mall entrances of the short-lived store.  He discussed how he made a special trip to Columbia in May 1990 when he got the news that Bonwit Teller was going under. 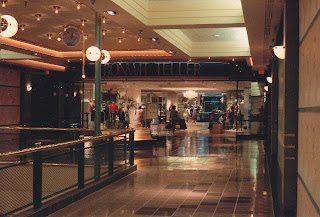 Yessir, you just saw Bonwit Teller at Richland Mall.  This deceased luxury department store was unwisely placed in this mall, and it lasted only a couple years.  Michael Lisicky took these two pics in May 1990.

The whole problem with Bonwit Teller was that the store was being inappropriately marketed by its then-owners LJ Hooker.  Bonwit Teller was from New York selling luxury merchandise similar to Saks Fifth Avenue and Lord & Taylor.  Clearly not tailored for the market in any way, the weight of stores like this led to the liquidation of the company not long after along with Sakowitz and B. Altman.  Some recent efforts have been made to revive the company, but the poor economy has halted those indefinitely. 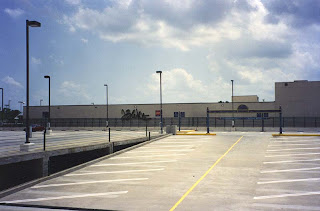 JB White from the parking deck on top of the mall.  This photo was taken by Sandy Lewis in the 1990's. 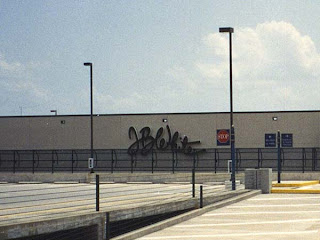 A closer view of the sign from the same photo.

JB White was the rock of the mall.  If not for White's, the mall would not only never have been redeveloped, but it would have never succeeded at all.  After all, this is the state's oldest mall-based department store anchor and its popularity well into the 1980's was the catalyst to the monstrous redevelopment it received.  While White's faded into the dustbin of history in 1998, the Belk that took its place is obviously successful enough to justify showing the photo I have here of the original store.  This store is also unique in that a movie theater is actually built on top of it.  Near to this theater is a photo of the JB White captured by Sandy Lewis as part of the incredible complete collection of White's photos he sent me. 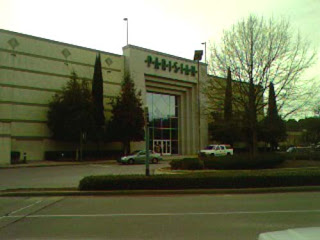 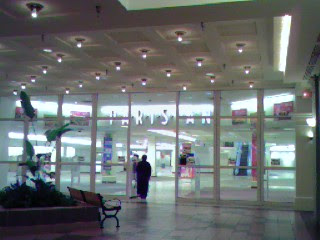 These two photos of the outside and mall entrance of Parisian were taken in 2005 by Jarrett Edwards right as the store was closing for good.

The Parisian at Richland Mall was a Southern upper-middle department store.  While it never was as successful as White's it was definitely more successful than the classy Bonwit Teller.  It lasted over 15 years and its closing highlighted the trouble the mall was having far more than Bonwit Teller closing.  The closing of Parisian there came in 2005 with the chain leaving the market completely.  This included closing their store at Columbiana Centre as well.  The photos here are courtesy of Jarrett Edwards and were taken just before the store closed for good.  Jarrett also sent me photos and information about stores in Augusta, GA.
Posted by J.T. at 6:00 AM