One of my first posts on what was then Georgia Retail Memories was about Savannah Mall and its scary turn of events that had it teetering on dead mall status.  Most malls could not have survived in that predicament.  The photos I took at that point were taken in 2003, so quite a lot of time has lapsed since then, and I also noticed a few cosmetic changes as well. Admittedly, I was thinking the mall was in real danger of sudden failure, but the managers were very creative in their efforts to revitalize it.  While it is today a second-tier mall, it is far from dead.  It still has Dillard's, Bass Pro Shops has made it six years in the old Parisian, and Belk Beery was subdivided into Target on the upper level and Burlington Coat Factory on the lower level.  A.C. Moore craft store also joined the ranks as a junior anchor.  In the case of Target, this is the first ever Target in retail-anemic Savannah, and they kindly put in a mall entrance to make sure that the two work together.  I am actually rather stunned by the brilliance of luring Target into a struggling mall. 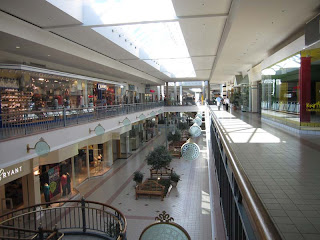 Savannah Mall was not left unscathed from the 2003 exodus, so it does have quite a few vacancies.  Abercrombie & Fitch was never replaced, and most major apparel stores are gone, though I noted stores like Gap were still there.  The two previously existing mall restaurants, though, remain (Ruby Tuesday and a Mexican restaurant), and a Texas Roadhouse flanks one of the entrances.  More popular local stores such as Savannah Candy Company also operate stores at both malls as well.  The only loss of an anchor since 2003 was Steve & Barry's, which left because the chain itself went bankrupt.  This means that Montgomery Ward is very much back to vacant.  What is amazing, though, is the food court.  If this mall is ailing, you would never tell by the food court.  Not one restaurant was vacant...not one.  Dillard's also chugs along as well in the old JB White.  This is possibly one of the oddest Dillard's locations, and the company has lately been stuck with a few second-tier locations.  Since this survived the last round of closings, it must be doing fine.  I am sure they would like to tack on to Oglethorpe, but the mall is a bit landlocked, which would make any addition very expensive and difficult. 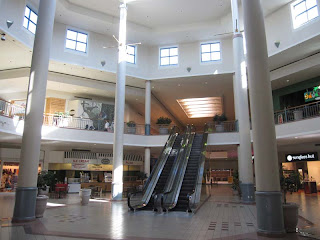 This mall court is situated at the crossroads between the former Montgomery Ward (background) and Dillard's (off to the right). 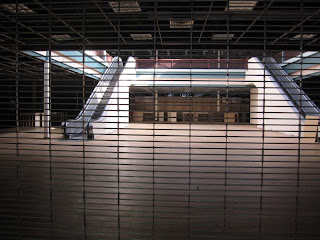 The former Montgomery Ward served for about three years as Steve & Barry's University Sportswear on the lower level.  Steve & Barry's went bankrupt, and for some reason the owners left this big empty department store open to view from the mall. 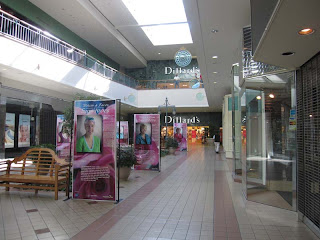 Looking down the Dillard's wing.  Dillard's opened as J.B. White, and its conversion in 1998 proved successful.
Six years after my last visit, I would definitely say that Savannah Mall was unusually creative in how they staved off disaster.  While I doubt they will ever recover their past glory without a major redevelopment, the area has seen substantial growth since I last visited while it lacks the retail development of other cities, allowing this mall to fill the void of stores Savannah doesn't have. This is something they should capitalize even more on. It already has a rather unique anchor line-up with Dillard's, Outdoor World, Target, Burlington Coat Factory and junior anchor AC Moore. They should note my post on Innsbruck Mall for a few more ideas.  I think a large Border's Book Store in the old Montgomery Ward would be nice. 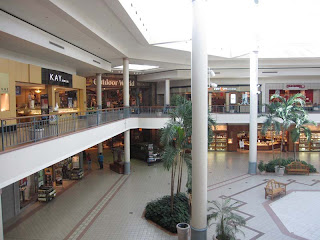 Here, I'm looking at the main court.  In the middle is Bass Pro Shops Outdoor World in a rather unique mall location.  The Outdoor World was Parisian until 2003, and it did not remain vacant long.  When Parisian closed here, they completely left the Savannah market.  With Belk absorbing them, there is no way it would have lasted anyway, so the timing was actually perfect. 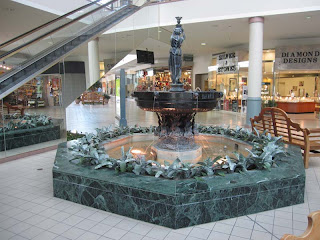 Fountains were not left out in Savannah Mall's design.  This is one of two in center court. 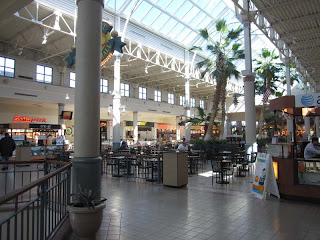 A sure sign of a failing mall is a food court emptying out.  There were absolutely no vacancies whatsoever than this food court.  In fact, it looked great. 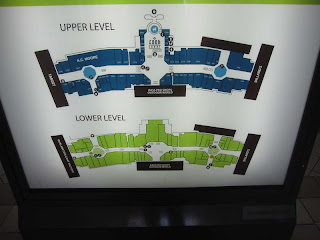 Savannah Mall has a not-too-exciting layout, but in 1990 just having a two level mall was something to celebrate since many of the 70's malls were quite small, plain and dumpy.
The state of Savannah Mall today means that the market is definitely sufficient to keep two malls, though not to the levels seen prior to 2003.  I wish the owners the best of luck, and I hope they find a good fit or plan for the old Montgomery Ward.  This is why I included a few new photos to compare yesterday and today. 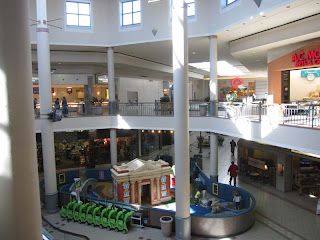 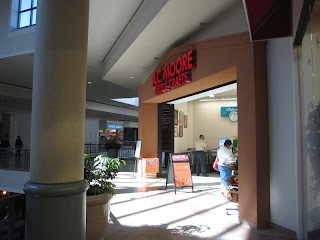 This is the west court where A.C. Moore recently joined on as a junior anchor.  This was originally on the Belk wing. 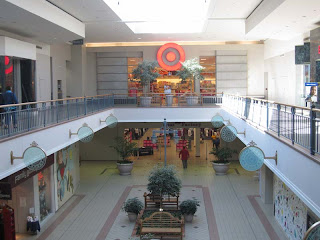 In the former Belk, Target took the upstairs and Burlington Coat Factory downstairs.  The old Belk was partially demolished for Target. 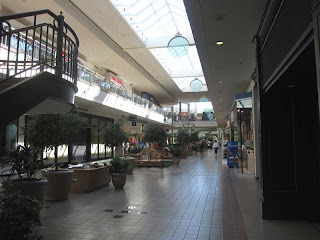 One of the main flaws I see with Savannah Mall is that it has too much shadow.  This is a typical problem for multi-level malls, and I found it depressing. 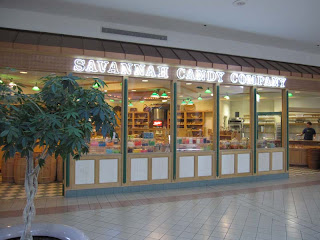 Savannah Candy Company is found in both malls, and is a significant local operation.  Malls once had almost exclusive local operations or small regional chains with national chain stores coming later as big retailers discovered the potential.  The smell of chocolate coming out of the place was so rich it was intoxicating. 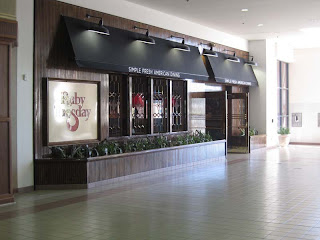 Ruby Tuesday is still found in a few malls.  This one has a classic design for sure. 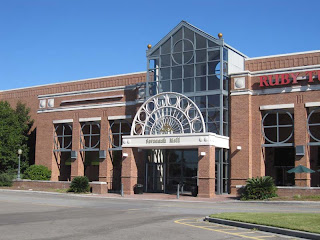 The mall entrance is original, but it doesn't look bad.  The ironworks theme is always attractive, and it was the rage around 1990. 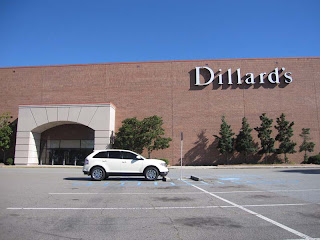 Outside of Dillard's showing an extremely plain store.  Most White's stores were not just somewhat lacking architecturally.
Posted by J.T. at 3:13 AM