Birmingham has lost many malls over the past decade, but none have been as forgotten as West Lake Mall.  West Lake Mall these days is like many malls across the nation that were once viable, but were lost to the city's collective memory by its location in a more blue collar area that began a steady decline into poverty and crime.  Malls like this one also shared a common aspect in that they were successful regionally in their time, but were not major players in the entire market area.  Over time, they found themselves eclipsed by burgeoning retail areas elsewhere as well as bigger and better malls.  As a result, they also were some of the first dying malls.  This is why West Lake Mall is rarely mentioned today when discussing Birmingham malls, and little information exists about its history. 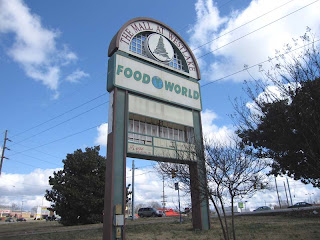 West Lake starting out promising when it opened in 1969.  It was a 300,000 square foot mall, and it had tthree major anchors: Sears and Loveman's of Alabama and a Grant's discount store.   Local chains such as Sokol's and Aland's would also have locations in the mall.  Sears was on the southeast side of the mall, Loveman's in the middle on the southwest and Grant's to the northwest at the other end.  In all, it was a basic T-shaped single-level mall built on a filled lake known as West Lake where the mall got its name.  Overall, the mall still was modestly successful, but only for its first 15-20 years.  The biggest change in that time was when Loveman's went out of business in 1980 and was replaced by Pizitz.  Stores like Sokol's and Aland's look to have faded out in that period as well.  When Grant's closed in 1976, it was replaced by Consumer Warehouse Foods.  Consumer Warehouse Foods was a division of Bruno's that was phased out by the mid-1980's replaced with regular Bruno's, Foodmax and Food World . 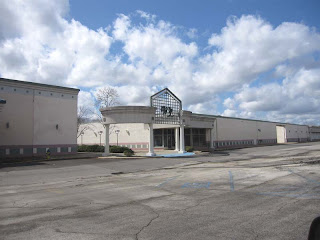 This photo is of the main entrance corridor, which is a long open-air wing into the mall in front of what used to be Sears mall entrance.  The fist photo is the West Lake Mall sign on US 11 still showing Food World.  The other side has a big, very homemade "Flea Market" banner. 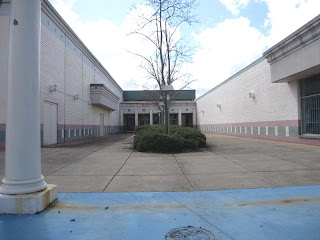 Looking along the main entrance corridor.  the store on the left is the back of the Food World, which is otherwise the old Sears building, which closed in the 1980's.  An empty store on the right was most likely where the Grants was originally. 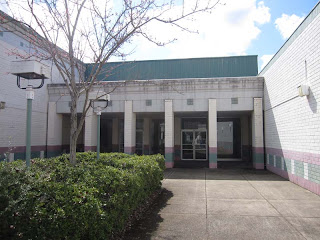 The main entrance looks like a cheap late 80's renovation, and it is definitely showing the stains of time.  A boxwood adorns the center of the walkway along with a tree oblivious to the mall's overall condition.  It still has character, though.  I like the grand entry element.
Signs that the mall was troubled were obvious by the mid-1980's when, according to Bhamwiki, Penn Mutual Life Insurance Company attempted to remake the mall as a factory outlet mall despite the fact the mall was still viable in that time.  Somewhere between then and 1990 , the mall also looks to have had a major renovation.  When Pizitz was bought out by McRae's, it appears that McRae's never joined the mall opting to close the store instead.  Sears would also close by 1989, opting to locate in the Flintridge Shopping Center in Fairfield in lieu of the troubled mall.  Despite the mall's decline, it continued to maintain at least two anchors at a time into the 2000's. 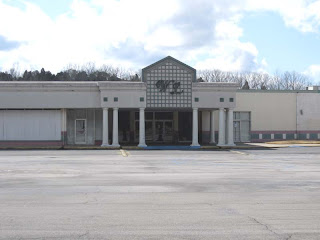 A second entrance was closer to the Loveman's/Goody's, but both entrances faced the northeast.  This one lacked the grand entryway in lieu of just a simple doorway.  Typical of renovations of that period, the design looked completely out of character with the rest of the mall. 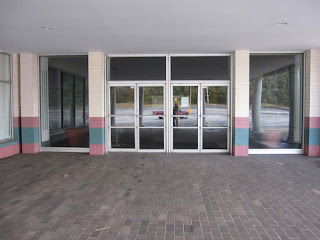 A look at the doorways, which clearly are original along the second entrance. 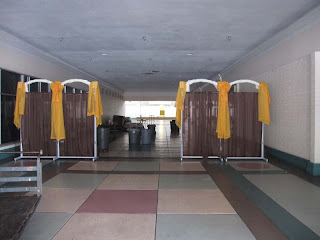 Inside, I see what looks like screens or parts of booths for the Flea Market.  In the distance I see light suggesting there are some skylights in the court ahead.  I wish I could have seen how the old Sokol's/Goody's worked into the mall.  Perhaps it has reopened, and I was unlucky enough to see it...or lucky considering this area was not the safest.
The Bruno family was the most committed to the mall's success.  In 1994, Bruno's closed its store in the old Grant's, opening up a flagship store in the Sears that would ultimately become Food World five years later.  The Sears location had much greater visibility than the old Grant's  On top of that, Goody's would take over the former Loveman's/Pizitz location bringing two anchors to the mall.  World Gym was also in the mall at one point, though it is not clear exactly where: most likely in the store with the outside entrance at the main entrance corridor.  The only problem with the grocery store conversion of the old Sears was the fact that the supermarket sealed off an entrance into the mall, sealing the mall's fate as well.  It literally hid the mall from view when that happened. 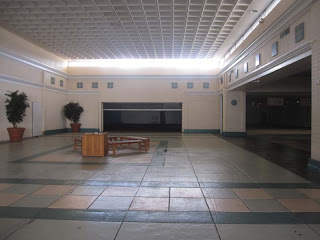 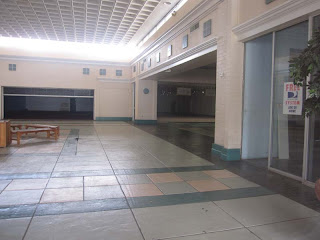 Here, we have a peak inside the main court in front Sears.  Although its hard to tell, it looks like the mall was mostly dark and plain aside from these courts.  This really does not look that much updated from the 1960's except for the color schemes.  The Sears mall entrance would have been just to the left of the first photo.
West Lake had so much working against it, so it was literally amazing how it kept reinventing itself in the past two decades.  It was located far from the preferred urban center, and it was most likely built to take advantage of growth that never occurred on the southwest side of the city as well as outlying areas such as Tuscaloosa.  The problem was, Tuscaloosa got their own mall the same year and Western Hills Mall opened only a few miles up the road in Fairfield a year later.  20 years later even those malls would be eclipsed, further drying the potential pool of shoppers.  On top of that, a new mall portion was built onto Five Points West shopping center in the early 70's including a Pizitz department store making Fairfield more of a shopping destination early in the game. 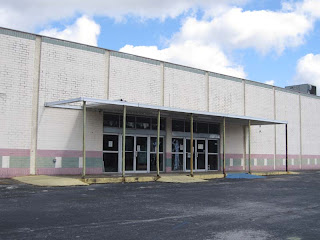 A look at the former Grant's, which later operated as Consumer Warehouse Foods (a division of Bruno's).  It looks like a big part of the canopy is missing. 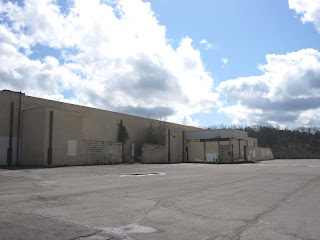 Looking along the back of the store.  It looks like another small entrance was in the back, but it has long since been sealed off. 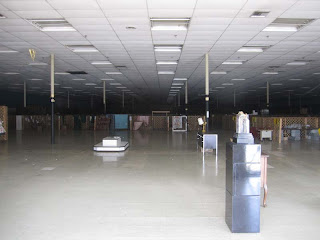 Inside the old Grant's/Consumer Warehouse Foods.  Here, I can clearly see booths that either have just been set up or are in the process of being removed...I don't know which.
While Fairfield itself is in decline today, it was the expansion of retail in Fairfield that heavily contributed to the eventual failure of West Lake Mall.  Early on, the market was overbuilt and Loveman's overlapped with Western Hills Mall: a plausible factor in why Loveman's liquidated in 1980.  Nevertheless, when Pizitz bought the Loveman's at the mall, apparently they instead decided to eventually close their Five Points West store in lieu of West Lake, which offered a more traditional mall experience.  Of course, consolidations from the 80's to recently made it difficult for even successful malls to maintain anchors, so West Lake Mall was a prime target for store closings. 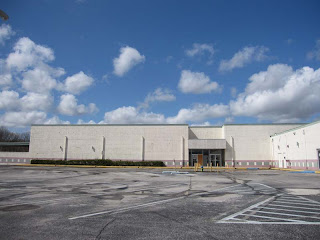 Loveman's/Pizitz was the southwest anchor of the mall, and apparently was also the smallest in the chain.  It last operated as a location of Goody's, but it is not known when Goody's closed at the mall.
By the late 2000's, the future of West Lake Mall was looking increasingly bleak.  Goody's was gone, nothing had been in the old Grant's for awhile and Food World closed in 2009.  At this point, the mall was effectively dead and sealed off.  Nevertheless, no matter how bad it looked for the mall, the 300,000 square feet center always seems to have a new plan set for it.  Right on the heels of the Food World closing, a local car dealer's plans to resurrect the mall as a flea market were announced.  He had bought the mall two years before just for that purpose.  When I visited, the mall was sealed off but I did see some progress toward setting up space in the old Loveman's, but it looked more like they were moving out instead of in.  A sign on the door said the flea market closed in November 2009, so I have to wonder if this plan is for real or if the 40 year old mall is finished. 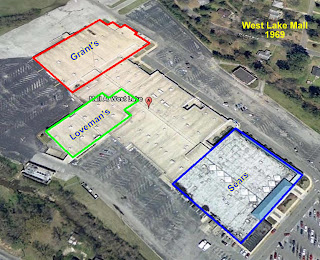 A recent Google Earth aerial shot of the mall, which I labeled with the original anchors as they were when the mall opened in 1969. 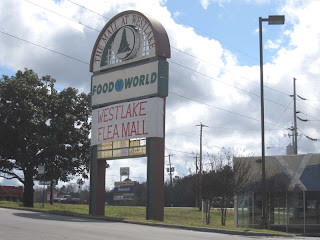 Now a look at the sign with "Westlake Flea Market".  Since this really IS a mini-mall, when is Sammy Stephens coming here to promote this mall's last stand?
What I saw of the mall was far from pleasant.  It was a scary, seedy place surrounded by worsening urban decay.  The US 11 corridor to the north of the mall was the most blighted I had seen anywhere in the city.  Despite a new theme park being built nearby, this also did not seem to reverse the fortunes of the mall.  The scene has changed dramatically since it was built, so while it is possible that the mall may succeed is a flea market it is for certain that it will never again be the retail destination it once was.  I do wish the owners the best of luck, though, because this mall is one of the oldest in the region and is small enough to easily be converted to a multitude of uses.  At least a flea market keeps it an actual mall.

PLUS: A whole lot more photos in this Flickr set!  I was so happy to find these since I couldn't get in!
Posted by J.T. at 6:00 AM