Most people know the story of how Federated Department Stores became Macy's recently after absorbing and eliminating all mid-market department names under their ownership. Today, their trade is mostly a nationally-marketed Macy's and their upscale brand Bloomingdale's. However, in the past Federated operated four seperate non-department store operations. Two of these were discount formats. One of these, of course, was Richway and the other was Cincinnati-based Gold Circle. The other two were more of an experimental store format that was helping Federated to test new store concepts.  These were Gold Key in California and the Gold Triangle chain in South Florida.  Gold Triangle was headquartered at 325 W 74th Place in Hialeah up until headquarters was moved to the new Hialeah store. 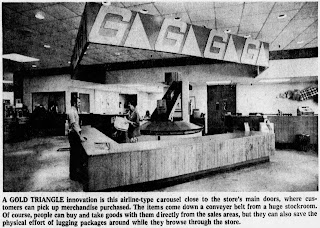 Seemingly, Gold Triangle would have just been the discount division of Burdine's or Jordan Marsh. However, this was not quite the case. It was a hard lines store best described as carrying "recreational, home and electronics" products [1].  It was geared as a leisure store, but it also carried hard lines, home products, garden products, patio furniture, appliances, and even an interior decorating section.  The store it seemed was aimed at appealing to a vacation-oriented market.  According to the Tampa Tribune, it was a "poor man's Abercrombie & Fitch" back in the days when Abercrombie & Fitch was a high-end sporting goods store instead of a teen clothing store. 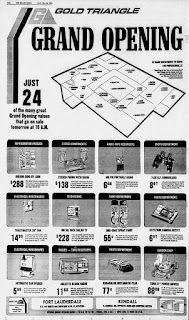 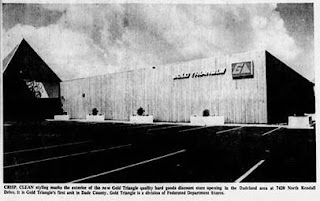 The second and third images are from The Miami News of the grand opening from May 20, 1970.

The closest relative to it is the also defunct Lechmere stores, which were for a time operated by Montgomery Ward.  Gold Triangle got its start in 1968. Three stores opened in Fort Lauderdale, Dadeland and Skylake Mall in 1970.  Within a year, three more stores opened in Tampa and Orlando along with an additional South Florida store in Hialeah.  As a side note, it should be noted that Skyland Mall, built in 1969, was demolished in 2000.  At its peak, the chain grew to six stores with additional stores in Orlando, Tampa, and Hialeah added in the late 70's.  Though operated by Federated, the chain was Hialeah, FL-based.

In November 1981, it was announced that Gold Triangle would liquidate and close down the entire chain. Apparently the odd format proved ultimately to be unprofitable, but this did not mean that Gold Triangle was being sold off. Instead, Federated decided to bring its Atlanta-based Richway division to Florida. Opening in 1982, the new Richway stores were all in new locations meaning the former Gold Triangle locations either remained vacant or were sold off.  A distinct design element with Gold Triangle stores were a two-sided tent structure over the entrance designed to look like a pyramid from a distance.  It is not clear why Gold Triangle went under so quickly.  Perhaps they were not able to compete with Lechmere, the catalog stores, and the emerging electronics stores at the time.  Perhaps the store was an experiment that helped them to learn what they wanted.  They lasted a little more than a decade.  By closing them, they were able to raise the capital needed to bring Richway to Florida.